(04/28/20) ALEXANDRIA, La. — Cleanup is underway at the LSU AgCenter Dean Lee Research and Extension Center, which was hit by a devastating tornado on the night of April 22.

AgCenter Central Region director Tara Smith said the damage totals from the storm have yet to be determined, but insurance adjusters and LSU Office of Facilities Planning have been on site to make an estimate.

“We know it’s going to be in the millions,” she said.

Dean Lee resident coordinator Daniel Stephenson said people who see photos of the damage then view it firsthand are still overwhelmed by the devastation.

“Everybody tells me the pictures don’t do it justice,” he said.

The DeWitt Livestock Show Facility, a total loss, will have to be replaced. The nearby State Evacuation Shelter only had minor damage.

Also destroyed were the foundation seed facility with offices for research associates and farm staff, a greenhouse and four tractor sheds, Smith said

“It’s going to be a long process, but we have already begun the cleanup process,” she said.

Initial evaluations suggest that several other damaged buildings that are still standing probably aren’t worth repairing and will have to be replaced, Smith said. The weed science laboratory was spared from any major effects.

Much of the station’s farm equipment was ruined, but some only had broken windshields.

“I don’t think there’s one piece of equipment that didn’t have some damage,” Smith said.

The agronomy lab operations have been moved to the LSUA Biology Department.

Research plots for corn and soybeans had been planted, and they fared well, Smith said, but a field of wheat planted for testing sustained significant damage.

“The entirety of the cattle herd was located and has been secured, which is also a blessing,” she said.

The tornado killed a woman about 3 miles away, and it went down Gregg Marshall Drive on the south side of the LSUA campus. The National Weather Service said the destruction was caused by a 150-mile-long supercell long-track storm system that started in East Texas before hitting Louisiana and Mississippi.

The June 18 field day at Dean Lee had already been canceled because of the coronavirus pandemic. Smaller, more focused events planned for later in the summer will feature beef cattle research, agronomic crops and horticulture.

“I’m optimistic in the late summer we’ll be able to hold our field tours and other meetings, at least in a virtual setting,” she said.

This year’s research will be conducted as scheduled, and equipment will have to be leased to get fields and plots planted.

“We’re going to do everything in our power to meet all our research goals at this station,” Stephenson said.

Harvest will be a challenge because harvesting research plots relies on small, state-of-the-art combines that allow researchers to obtain data from individual plots.

Stephenson and Smith were impressed with the help received from other AgCenter regions and research stations. Several research stations sent equipment, and at least 15 AgCenter agents are helping with the debris cleanup and installing new fences.

“It’s been really nice to see the outpouring of help,” Stephenson said.

Smith said she was moved by the help by AgCenter personnel who came to the station on their own.

“I’m just proud to work for the AgCenter. We are a people-centric organization, and that shines in times like this,” she said. 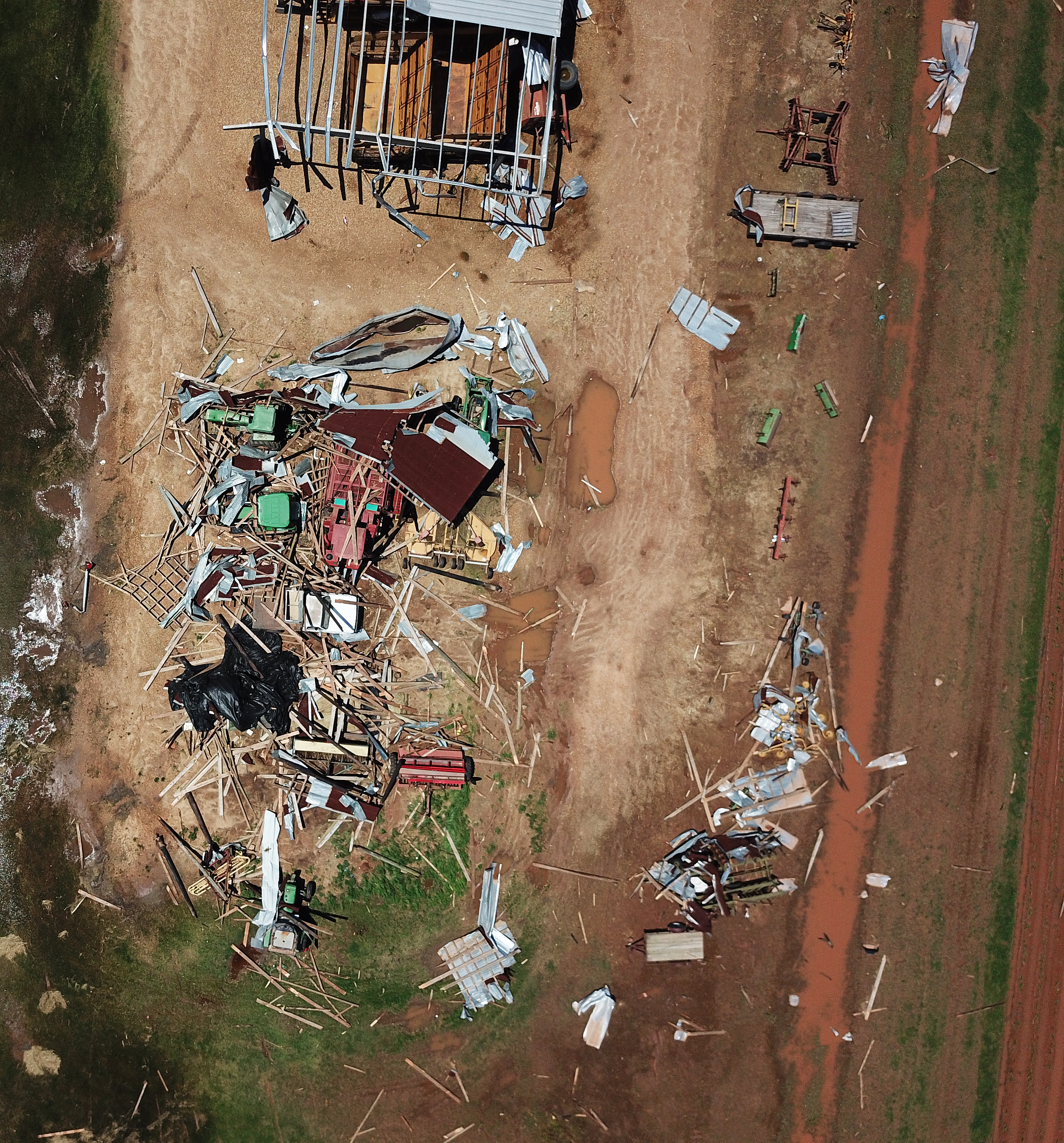 A photo taken by a drone shows the destructive power of the tornado that struck the LSU AgCenter Dean Lee Research and Extension Center on April 22, 2020. The National Weather Service reported that the EF2 tornado had a destructive path 9 miles long by 550 yards wide. Photo by Randy Price/LSU AgCenter 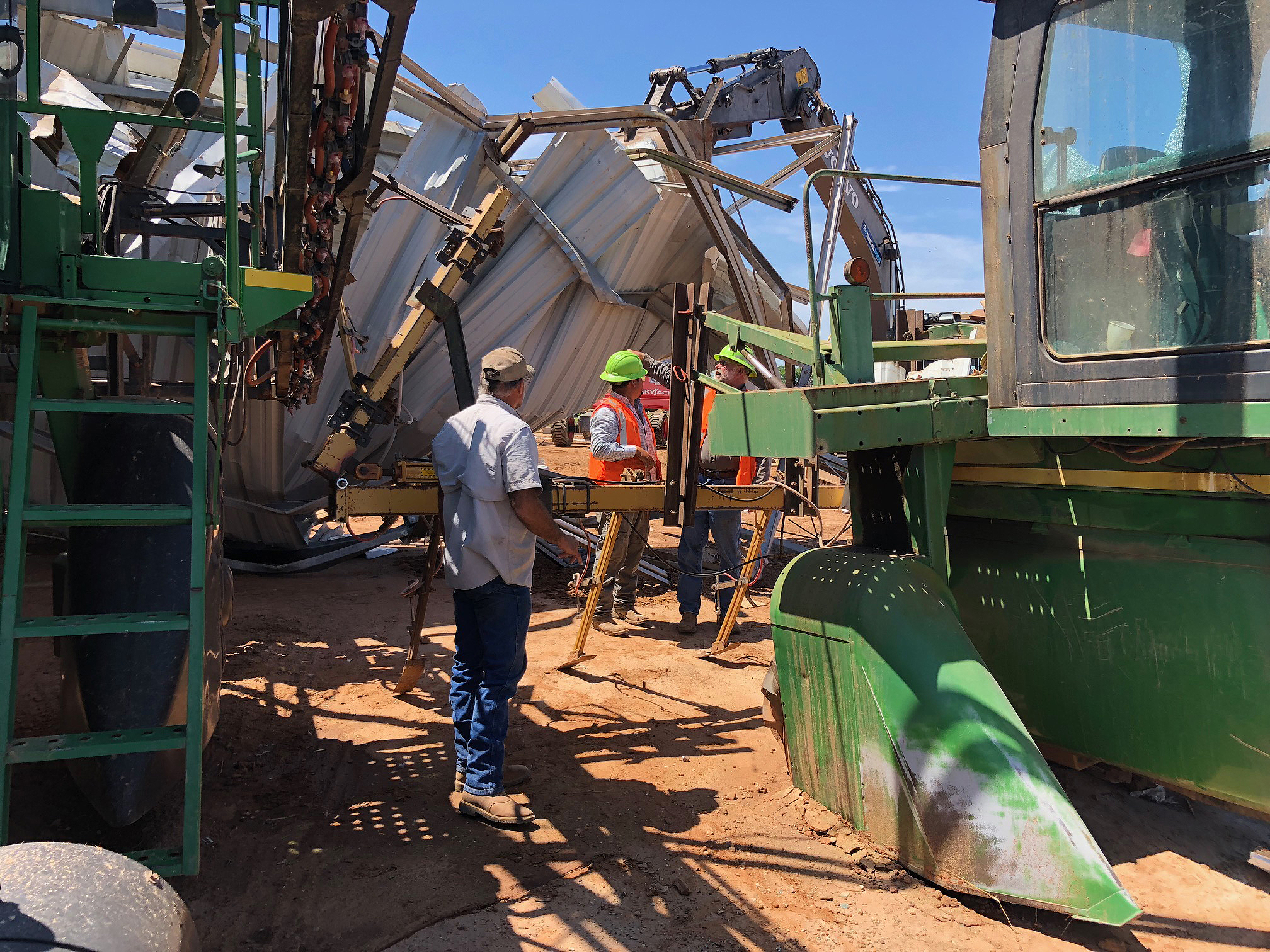 Workers at the LSU AgCenter Dean Lee Research and Extension Center salvage farm equipment in a shed that was demolished by a tornado on April 22, 2020. Photo by Tara Smith/LSU AgCenter

The heavily damaged LSU AgCenter DeWitt Livestock Show Facility is expected to be replaced after it was damaged by a tornado on the night of April 22, 2020. Photo by Tara Smith/LSU AgCenter

One of four equipment sheds at the LSU AgCenter Dean Lee Research and Extension Center that was destroyed by a tornado on April 22, 2020. Photo by Tara Smith/LSU AgCenter