(12/23/19) CROWLEY, La. — The LSU AgCenter H. Rouse Caffey Rice Research Station is collaborating with a Cornell University-based project aimed at studying the ancestors of what became the modern rice plant.

Researchers hope the work will uncover useful traits from the wild lines of rice that have been lost through domestication.

Three wild strains of rice from China, Laos and Indonesia were used in the project. “They represent distant cousins of the ancestors that gave rise to modern rice,” said Cornell University geneticist Susan McCouch.

The wild strains were crossed with two modern rice varieties — an Arkansas variety, Cybonnet, and IR64, a variety developed by the International Rice Research Institute in the Philippines.

After several generations of backcrossing to the modern varieties, the researchers generated a collection of 460 genetically distinct lines, each containing only a small, unique segment of the wild ancestor.

LSU AgCenter rice breeder Adam Famoso, who earned his doctorate degree while studying with McCouch, grew the rice lines at the Rice Research Station. Famoso also worked on the project when he was at Cornell.

McCouch and two of her co-workers came to the Rice Research Station in summer 2019 to collect leaf tissue for genetic analyses.

Genetic analyses of the collection of 460 lines are being compiled for use in breeding and genetic research. “They’re an encyclopedia that no one has read yet,” McCouch said.

It’s possible to discover novel traits conferred by the small, wild segments in these lines, McCouch said. They could result in new textures, flavors or forms of disease resistance that were eliminated from the rice genome as domestication occurred, starting thousands of years ago.

The project, funded by the National Science Foundation, was designed to turn up valuable traits that are not immediately obvious, McCouch said.

For example, research could determine that some plants have a mechanism to shed pollen early in the day to avoid heat-based sterility or to recruit particular microbes from the root area in the soil to help them extract nutrients from the soil in a process may have been lost through domestication.

It’s also possible that researchers will be able to find new genetic mechanisms that help rice plants withstand drought or submergence, she said. Those characteristics could be crucial in countries where water demand is exceeding the supply or where control of flooding is a problem.

The harvested rice seed will be used for further study.

For five years, one of McCouch’s talented postdoctoral associates, Namrata “Moni” Singh, worked to develop the lines. But tragically she never got to see the final results of her work, as she died earlier this year after a lengthy battle with leukemia.

“One of the last things Moni wanted was to get the paper published describing this work and to make the seeds available for distribution,” McCouch said. 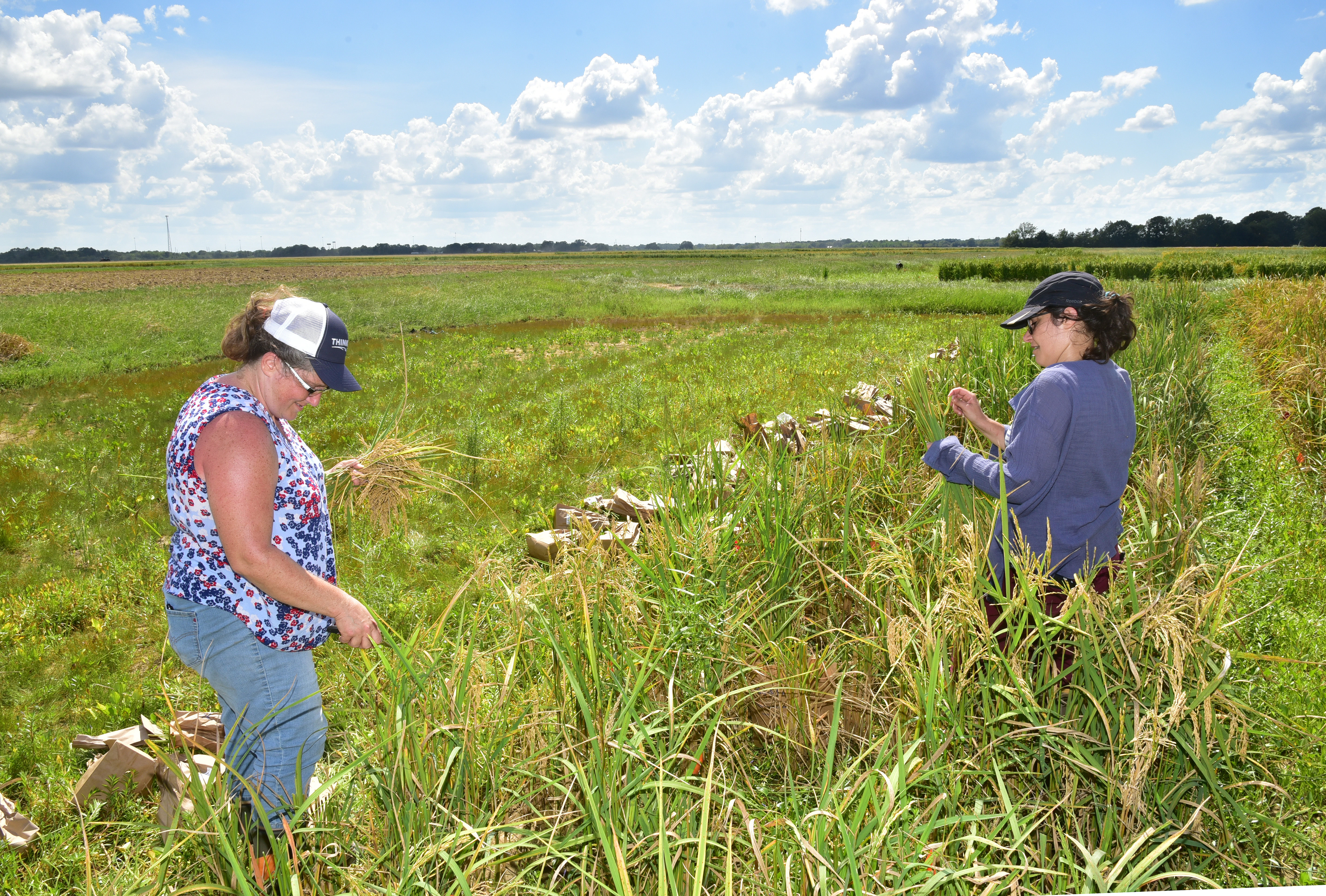 Genetic researchers Sandy Harrington, right, and Eliana Monteverde harvest rice from plots grown from wild rice to determine if undiscovered traits can be found that can be used in breeding to develop new rice varieties. Photo by Bruce Schultz/LSU AgCenter