“Optimism is high that with recaptured market share in core markets, the outlook for rice is positive from a price standpoint,” saidMichael Deliberto.

He told farmers American rice has become more competitive, which could allow the U.S. to regain market share in Latin America.

The improved trade outlook combined with decreased U.S. rice acreage has led the U.S. Department of Agriculture to increase its projected long-grain price to $10.50 per hundredweight and the medium-grain price to $11 cwt., a 50-cent increase from the previous USDA estimate, Deliberto said.

Iraq has agreed to buy 120,000 metric tons of U.S. rice, but it’s unclear if that country will consistently be an American customer.

The prospect of selling rice to China remains viable, but no deals have been reached yet, Deliberto said.

China has been selling rice in Puerto Rico, and China has become taking away U.S. market share in the Mediterranean.

Graduate student Sam Rustom has a study of mixing Loyant with Provisia.

One study is looking at the rates of Loyant that can damage soybeans from drift. Small droplets of Loyant, 2,4-D and dicamba can damage nearby crops. “If you’re putting Loyant out next to a soybean field, be very careful. It takes only a small amount to get activity,” Webster said.

Another study is being conducted to see if rice seed germination is affected by late-season herbicide applications.

Testing also is being conducted on herbicide timing and rates for a wide range of products, said graduate student Connor Webster.

Foundation seed is being grown for both lines, Famoso said, so if either is released at the end of this year, seed production could start in 2020. “At the end of the season, we’ll make a final decision,” he said.

A new Provisia variety was approved this year, but work continues on more possibilities with the Provisia technology. “We’ve got plenty of other lines in the Provisia pipeline,” Famoso said.

Fungicide-resistant sheath blight can be controlled with Elegia. Amistar Top didn’t work as well as expected last year, but more research is being done to see if its effectiveness can be improved, Groth said.

It appears this won’t be a bad year for Cercospora. But Cercospora will become apparent earlier on late-planted rice, he said.

AgCenter rice specialist Dustin Harrell said heavy rainfall this spring has created more challenges for growing rice. Most of it was planted the third week of March. “We were fighting the weather from the get-go,” he said.

The last big rain probably claimed 200 acres of rice, and one farmer has had his crop submerged three times after heavy rains this year.

“It’s all been about fighting the water,” said Andrew Granger, AgCenter agent in Vermilion Parish.

Some uneven emergence of rice plants has occurred on some fields, probably from cool soil temperatures, Harrell said.

AgCenter entomologist Blake Wilson said the seed treatment Fortenza used with Cruiser Maxx has been as effective as Dermacor against rice water weevils, but it has no activity on stem borers.

Dermacor can even be effective on stem borers in the ratoon crop, Wilson said.

Soybeans can survive flooding for 48 to 96 hours, depending on conditions.

Padgett recommended farmers wait four to five days before deciding whether they will replant a soybean field that has flooded. 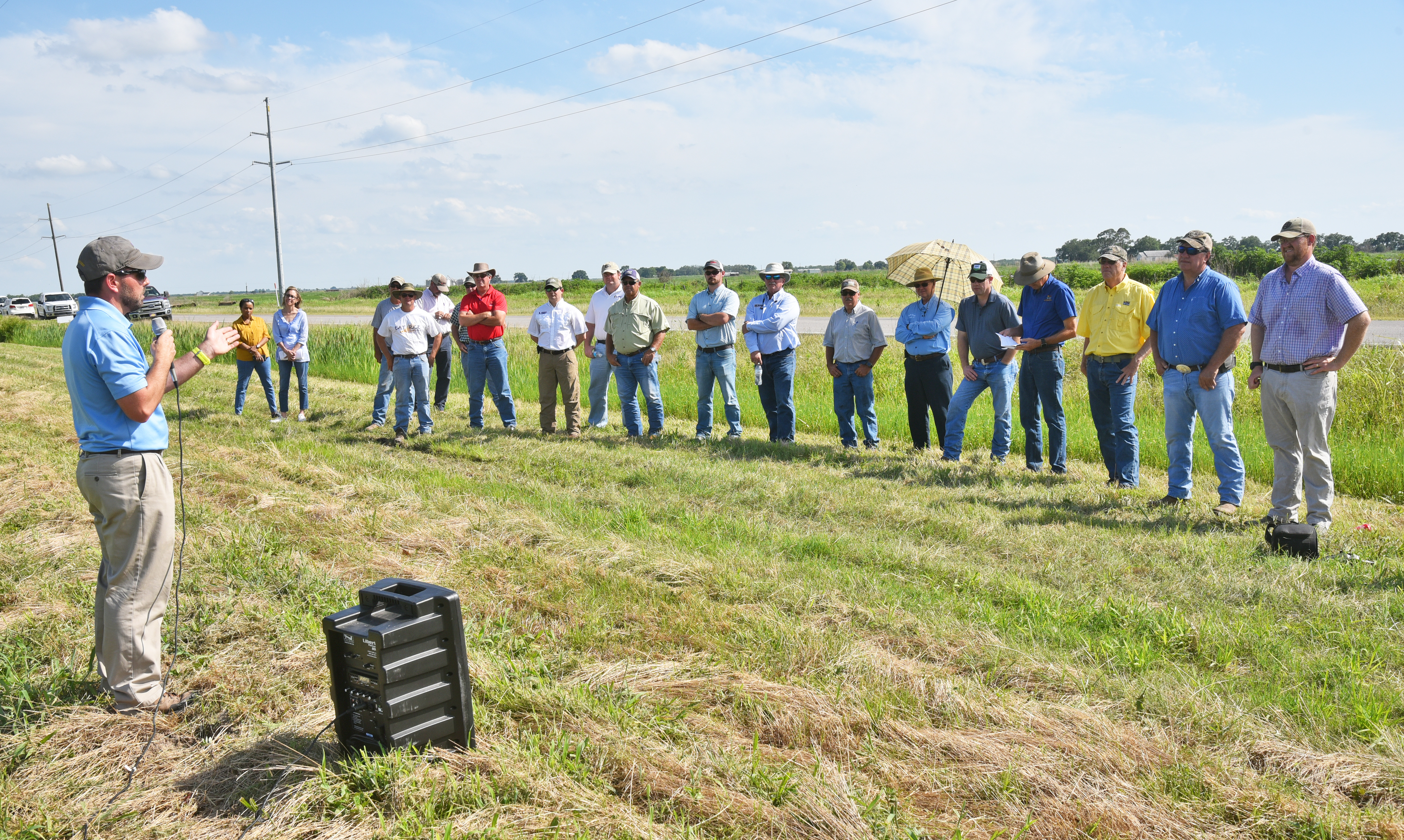 At stop on the field tour during the Acadia Parish rice field day on June 12, LSU AgCenter weed scientist Eric Webster talks about a study of herbicide effectiveness on aquatic weeds. Photo by Bruce Schultz/LSU AgCenter 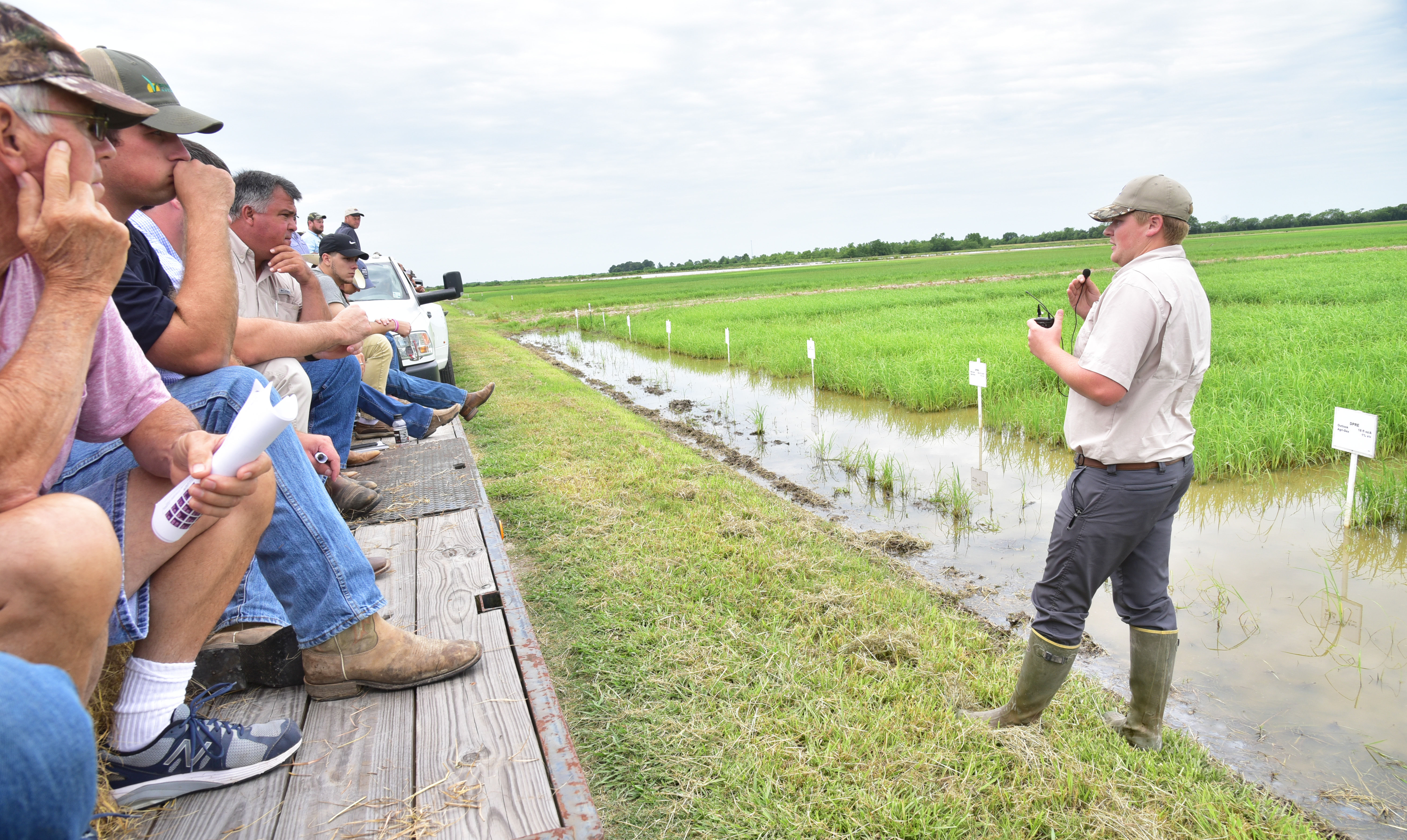