(10/26/18) ABBEVILLE, La. — Cattle producers who fail to adopt a traceability system eventually may have difficulty selling their product, an LSU AgCenter veterinarian warned.

Dr. Christine Navarre said at the Acadiana Cattle Producers fall field day on Oct. 24 that the traceability requirement is needed to help control a disease outbreak and because consumers want to know the source of their food.

“It’s going to be mandated by the market if you want to sell,” Navarre said. “You’ll have to do it because the public demands it.”

One cow with bovine spongiform encephalopathy in 2003 cost the market $4 billion, and it took a week to pinpoint the cow’s origin. “We really need a 48-hour trace back, and we don’t have that right now,” she said.

With a traceability system, cattle owners who could prove that their animals were not in contact with an infected cow may have fewer restrictions on movement if an outbreak of a disease such as hoof-and-mouth were to be found, she said. But under the current lack of a system, all animals are more likely to be quarantined.

A national traceability working group has been formed to study the issue and develop a uniform set of guidelines.

Navarre urged producers to obtain a premise identification from the Louisiana Department of Agriculture and Forestry and to keep good records for all cattle movements.

AgCenter agent Andrew Granger said the U.S. is one of only a few countries that do not have a mandatory traceability program for livestock.

AgCenter agent Stan Dutile said it’s possible that cattle producers will be penalized if they can’t show where their cattle have been. “If we don’t start doing a better job, we’re going to lose money,” he said.

Beef faces competition from meat substitutes, Dutile said. One product has been grown in a lab, and it could be available for consumers by 2021.

Cattle prices are likely to stay about the same until the middle of next year when an increase might occur, said AgCenter economist Kurt Guidry. Domestic and foreign demand for American beef is high. “Maybe the lows in the market may have already been established,” he said.

So far, the trade wars and tariffs have not affected the cattle market.

A record number of cattle are being held in feedlots, and cheap corn is expected to continue, Guidry said.

Rice straw is not often an adequate feed for cattle because it lacks enough protein, said AgCenter ruminant nutritionist Guillermo Scaglia. Hay with less than 7.5 percent protein is insufficient, and most rice straw has less protein than that.

Scaglia explained that the microbes in a cow’s gut need greater protein for appropriate digestion of the hay. He recommended hay with protein of 8 percent or more and total digestible nutrients of 55 to 65 percent or more. Otherwise, more than likely, hay will have to be supplemented with another feed.

Improperly stored hay — for example, placing the bale on the ground with no cover — can lose much of its dry matter and quality he said.

Cattle producers should have their hay tested to determine the nutrient levels, Granger said. Bahia grass makes a good forage, but its hay usually isn’t high-quality. And it can be killed in a bermudagrass field with an application of metsulfuron methyl or glyphosate.

AgCenter weed specialist Ron Strahan said bulrush can be controlled with 2,4-D at the rate of a gallon per acre used with a surfactant. Spot control of bulrush clumps with 2,4-D or glyphosate works even better, with either product used at the rate of 2.5 ounces per gallon.

Even better control can be obtained by using a wiper with either herbicide in one direction across a clump of bulrush, then wiping the material in the opposite direction he said.

The station is not closing, but Scaglia, the only researcher housed at the station, will transition most of his work to the AgCenter Dean Lee Research and Extension Center. “He will maintain an office at the Iberia station,” Leonard said.

Annual cattle and sugar field days will continue at the Iberia Research Station, and a small cattle herd will be kept there for Scaglia, he said. But most of the research cattle herd at Iberia will be moved to Dean Lee.

Open land at the Iberia station will be leased to local farmers or ranchers with the expectation that they will support the existing Iberia station programs with demonstrations. This process has been used at other stations with considerable success and allows the AgCenter to access to the property or to resume research operations at the end of the lease period, Leonard said. 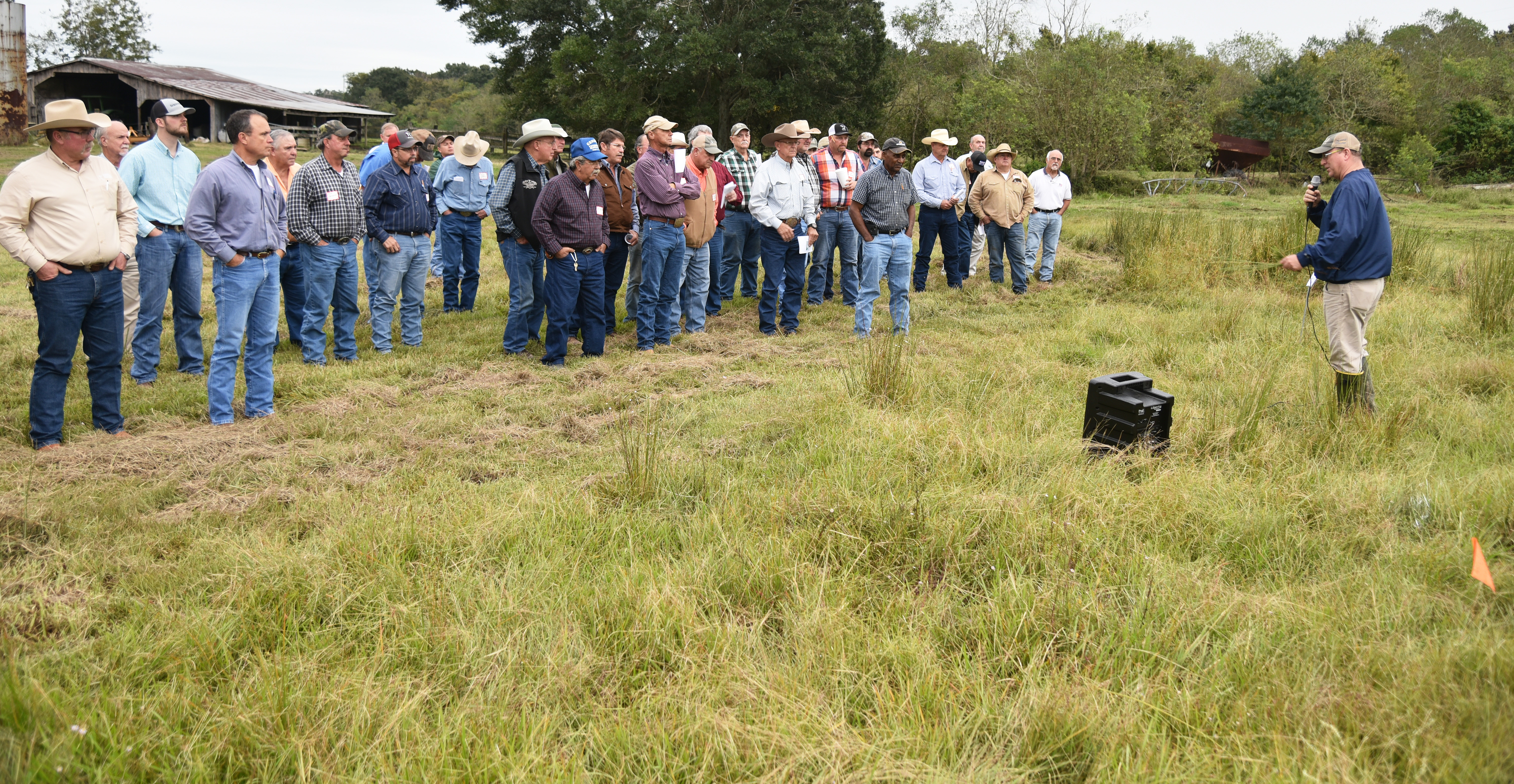 LSU AgCenter weed specialist Ron Strahan, far right, tells cattle producers which products can be used to control bulrush weeds. He said 2,4-D and glyphosate can eliminate most of the weeds that are found growing in wet, low-lying areas of a pasture. Photo by Bruce Schultz/LSU AgCenter

Participants at the Acadiana Cattle Producers fall field day take part in a contest to judge several different bales of hay. They had to judge the quality and guess the weight of each bale. Photo by Bruce Schultz/LSU AgCenter