(09/15/17) WASHINGTON, La. — Louisiana farmers are benefitting from long overdue dry weather that has allowed them to cut hay, harvest soybeans and plant sugarcane.

“This spell of dry weather will let us get a lot done,” said Vince Deshotel, LSU AgCenter county agent in St. Landry Parish. “The winds of Irma have dried everything out.”

Deshotel said the parish soybean acreage is between 40 and 60 percent harvested.

Earlier-planted beans that were sprayed with defoliant before Hurricane Harvey are showing signs of damage, but beans that will be harvested later should have better quality, he said.

Cattle owners have been able to cut hay because of drier conditions. “In the last seven days, there’s been a tremendous amount of hay put up,” Deshotel said.

But he said fields should have been harvested twice for hay by now, and the nutrient quality of grass cut past the regular time has declined.

Soybean farmers are reporting good yields, but grain damage is common, said AgCenter soybean specialist Todd Spivey. He estimated that 40 percent of the state’s 1.26 million acres have been harvested.

Dry weather after Hurricane Harvey has given farmers a good harvest opportunity, he said.

Insect damage is being found, but purple seed stain as the result of Cercospora leaf blight is the main quality problem. Some soybeans are showing signs of molding and shriveling because of wet weather, Spivey said.

He estimated soybeans are being discounted for damage at an average rate of 10 percent, but some have 20-40 percent damage. “Considering what we’ve gone through, 10 percent damage is not bad,” Spivey said.

Farmer Anthony Plattsmier, of St. Landry Parish, is pleased with his soybean harvest so far. He said the yield is ranging from the high 40s to the lower 50 bushels per acre.

The crop grown on higher ground is doing better than the land he uses for rice, Plattsmier said, which is on lower terrain.

Quality could be a factor. “We’re going to have some damage,” he said.

The damage appears to be rot caused by excessively wet conditions.

Plattsmier’s soybeans also incurred aerial blight, which required two fungicide applications on many fields. Stinkbugs were a problem, with the red-banded version showing up early in the growing season and the green and brown varieties becoming a problem more recently.

Todd Fontenot, AgCenter county agent in Evangeline Parish, said soybean harvest is just getting underway in his parish. Constant wet weather is taking its toll on quality. “Disease pressure is pretty high with all this rainfall,” he said.

She estimated the parish harvest is around the halfway point.

Soybean damage reports include a wide range of quality problems, with damaged beans in the range of 15-25 percent. “Some of it’s worse, some of it’s better,” Miller said.

In West Baton Rouge and Iberville parishes, damage to the soybean crop is running in the range of 4-6 percent, said AgCenter county agent Stephen Borel.

Farmers in West Baton Rouge Parish are 65-70 percent finished with harvest, while Iberville Parish farmers, who had to deal with more rain, are only about halfway done.

“They’ve been rolling since it got dry enough to get in the fields,” Borel said.

Yields have been in the 50-60 bushel-per-acre range for soybeans on cane beds, but much lower on flat ground, he said.

Dry weather has provided improved conditions for harvesting hay and planting sugarcane, Borel said, and about 65-70 percent of the cane is planted.

Sugarcane farmers are on schedule with planting, and most will be finished in a few days. “It’s been a great two weeks to play catch-up,” said AgCenter sugarcane specialist Kenneth Gravois.

The mill at St. Martinville, LASUCA, will start operations Sept. 20, he said.

Yields have been good, with half of the parish crop harvested, but damage is expected because of heavy rain a few weeks ago, she said.

Bradley Pousson, AgCenter county agent in Cameron Parish, said a few farmers have returned their cattle to pastures after evacuating them for Hurricane Harvey, but most are keeping their herds on higher ground. “They just don’t have enough dry spots,” he said.

Some Cameron Parish pastures have been cut for hay north of the Intracoastal Waterway, he said.

Some areas remain flooded and it will take two to three weeks to drain. “It’s better than it could have been. We could be dealing with saltwater,” Pousson said.

Pousson said he knows of some rice farmers whose second crop of rice is a loss because it started to sprout.

Farmer Anthony Plattsmier harvests soybeans in St. Landry Parish. Soybean yields have been good, but beans are showing signs of damage from the excessive rainfall. Photo by Bruce Schultz/LSU AgCenter 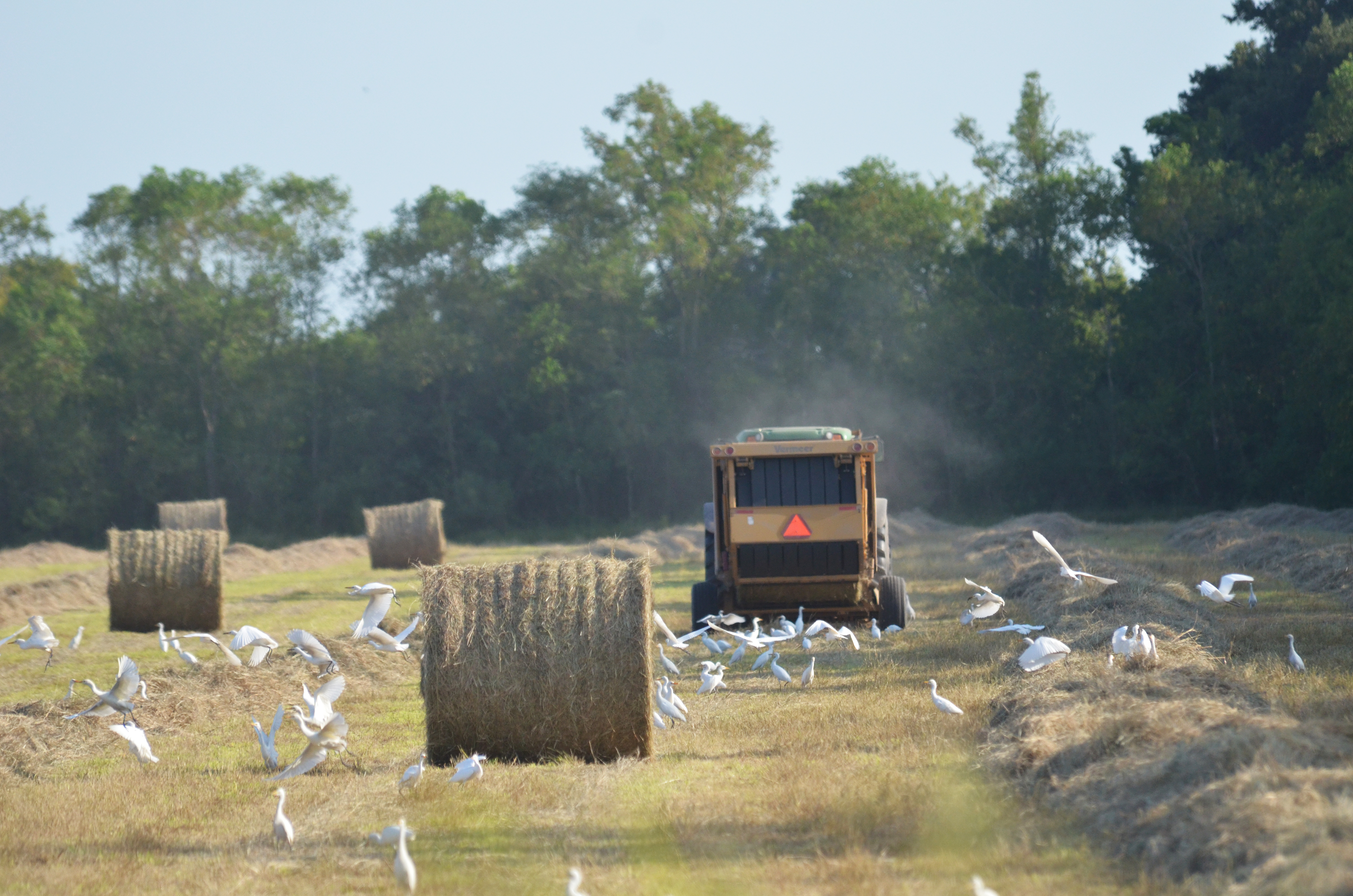 A farmer bales hay near Abbeville. Cattle owners have taken advantage of the current dry spell to cut hay fields. For many, this has been the first time they were able to get into the fields because of excessive rainfall. Photo by Bruce Schultz/LSU AgCenter