You can deal with potbound plants

(09/15/17) Many of us grow tropical plants in containers to beautify our porches, patios and decks. These plants often live two lives — spending summer outside when the weather is warm and going inside the house during the cold of winter.

Plants placed outside on porches, patios, decks and balconies grow vigorously through the summer. This is because excellent growing conditions outside, including abundant light, good air circulation and high humidity, encourage the plants to grow enthusiastically.

As a result, your outdoor container plants may have outgrown their pots and become potbound. September and early October are ideal for repotting tropical container plants that you have summered outdoors.

The term potbound is used to indicate plants that have tightly filled their pots with roots. Most plants will tolerate being somewhat potbound. Actually, in the case of some plants, being potbound encourages blooming. This is true for bougainvilleas, for example. Also, many bromeliads, succulents and cactuses grow better in relatively small pots.

Plants that are potbound generally require more frequent watering and careful attention to fertilizing. Once the roots fill the container, they are limited in the amount they can continue to expand and grow. Even though the roots run out of room for growth, they must still provide adequate water and nutrients to the plant as it continues to grow larger. As long as adequate water and mineral nutrients are provided, however, plants in this condition may remain happy for quite a while.

Eventually, however, the roots become so packed in the container that the plant begins to suffer. The roots stop growing actively, and as a result, the upper portions of the plant begin to suffer as well. Common symptoms of a plant with an excessively potbound condition include frequent wilting, stunted growth, smaller new leaves, poor quality flowers or lack of flowers, and yellowing and dropping older leaves. Many other problems can cause similar symptoms. So how do you determine if a plant is actually potbound?

There are several things to look for. First, you will see a dense growth of roots on the soil surface (some surface roots are normal). In extreme cases, the soil may be so full of tightly packed roots that there is resistance when you try to push your finger in the soil. Tilt the pot over, and look for roots growing out of the drainage holes.

Finally, to be absolutely sure, lay the pot on its side. For plastic pots, hit the sides with your hand forcefully a few times to loosen the root ball. In clay and ceramic pots, run a long knife around the inside of the pot. When the root ball is loosened, place one hand over the soil with the stem of the plant between your fingers, and tilt the pot so the plant slides out supported by your hand. You could also lay the pot on its side, grasp the plant, and gently pull it out.

Once the root ball is out of the pot, you will be able to clearly see how potbound the plant is. If the roots do not look like they have filled up the pot, you can slip the root ball back into the pot and do nothing. If all you see is a dense network of roots with little potting soil showing though, this indicates the need to repot the plant. If the plant is still growing well and looks healthy, you may put off repotting until a later date if you like. But a plant that is not doing well because it is potbound should be repotted immediately.

When repotting a plant into a larger container, the new pot should generally not be tremendously larger than the pot it has outgrown. The new pot should allow only about 2 to 4 inches of new space between the root ball and the sides of the new pot.

Over-potting a plant — putting it in a pot that is too large — can lead to root rot from overwatering. And aesthetically, the size of the plant needs to be in pleasing proportion to the size of the pot. In other words, a relatively small plant looks out of place in a relatively large pot. By the way, that brings up another reason to repot. The plant has grown so large it is proportionally too large to look good in its current pot or it is top-heavy and prone to falling over.

Don’t cut corners in obtaining the best possible potting soil mix when repotting. The health of the plant is influenced by the quality of that mix. Most nurseries and garden centers offer quality prepared potting mixes. Make sure that the mix is lightweight and drains well. Avoid dark, powdery, heavy potting mixes. Some plants, such as cactuses and orchids, are grown in specialty mixes different from typical potting soils.

To repot the plant into a new pot, place a layer of potting soil in the bottom of the new pot. Adjust the depth of the layer of soil at the bottom so that when the plant is placed in the new pot the top of the root ball will be somewhat below the rim of the pot. Place the plant in the new pot, disturbing the roots as little as possible. Use potting soil to fill in the side spaces between the root ball and the pot. Do not push on the soil with your hands. Instead, if the pot is not too large, settle the soil by lifting the pot a couple of inches off the table and dropping it. In the case of large pots where this is impractical, gently firm the potting soil with your hands, but don’t pack it. Add enough soil to reach the top of the root ball. Finally, add water to finish settling the new soil, and you are done.

Some root damage may occur in this process and plants may undergo some shock after repotting. So place them where environmental conditions do not put great demand on them. Shady porches and patios or areas beneath the canopy of shade trees usually are best for getting plants over the trauma of repotting and established in their new container. Allow four to six weeks for plants to become reestablished before moving them back where they were originally growing outdoors or indoors for the winter. 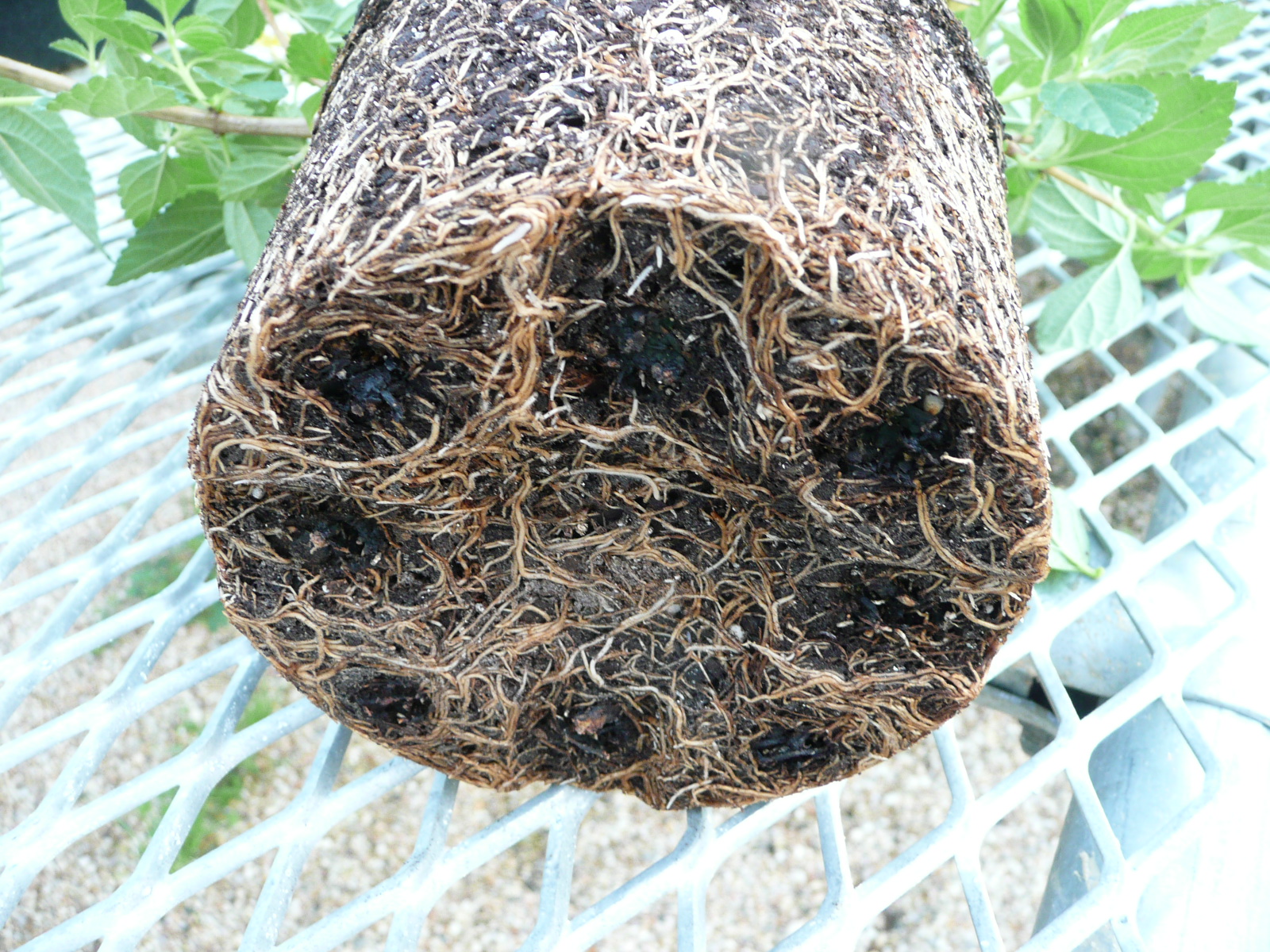 When you remove a plant from its pot to see if it is potbound, you will notice the tightly packed roots, indicating a potbound condition. Photo by Dan Gill/LSU AgCenter