(09/08/17) Bromeliads are a beautiful family of tropical plants, many of which possess colorful foliage, beautiful flowers or both. With their many shapes and colors and ease of culture, once you have one bromeliad you are likely to want more. But even one or two plants will make an excellent addition to your potted plant collection.

Bromeliads that produce attractive flowers are often purchased in bloom. The flower spikes are exotic and beautiful and usually stay attractive for an extended period. Eventually, however, the flower stalk will fade and become unattractive. When that happens, cut it off.

Some genera, such as Neoregelia, do not produce especially showy flowers, but the foliage in the center of the plant turns a brilliant color when they bloom. Indeed, for most bromeliads, it is not the flowers that provide the primary show. Colorful bracts or modified leaves accompanying the flowers add much to the display.

One of the most striking aspects of the life cycle of bromeliads is that, for most species, once they bloom, they die. After the flowering is finished, the original plant will eventually begin to decline. Don’t panic; they don’t do it right away. They usually stay attractive for an extended period, even after the flower has faded. Eventually, though, the plant will produce no new growth, and it will gradually become less attractive as it begins to die.

Pups to the rescue

Before they die, however, most bromeliads will send up pups from their base, and these small plants can be used to grow the next generation. One plant generally produces several pups, so you usually end up with more bromeliads than you started with. Pups may be separated from the original plant at any time after they have grown to be about one-third the size of the parent. This may be done before the original plant dies or has even become unattractive.

No need for separation anxiety

If the original plant has grown unattractive and you intend to discard it after removing the pups, take everything out of the pot to make it easier to work with. Using a sharp knife or hand pruners, cut the pups from the original plant at the point where they are attached at the base. Hopefully, the pups will have some root development. But if they don’t, that’s okay. Pups will form their own roots after they are potted.

If the original plant is still attractive, this separation can be done without taking the plant out of the pot. Simply use the knife to carefully cut off the pups while the parent plant is still in the pot.

Once the pups are separated, they should be potted. Most bromeliads look better when they are grown as single specimens. Look at how the bromeliad was growing when you bought or received it. If only one plant was in the pot, then this generally will be the best way to grow the type you have. Plant each pup individually in a small pot — generally a 4-inch pot is large enough — using a lightweight, fast-draining potting mix.

If the plant was growing in a cluster when you got it, you may choose to continue to grow your bromeliad in a cluster. In this case, the pups are often left to grow all together in the same pot, and the original plants are simply cut out when they are no longer attractive. Should they begin to outgrow the original pot and look too crowded, repot them into a larger container. As an alternative, you could remove the pups, and pot them together for a fuller effect. Or you could pot them separately to create more individual plants.

Because the newly separated and potted pups will have poorly developed root systems or none at all, you may need to support them initially. This can be done by placing two or three small stakes around the plant until they are well-established. Chopsticks or pencils work well. Do not plant the pup too deep in an effort to support it. Bromeliads should be planted only up to the base of their lowest leaves.

While they are rooting, keep the plants in bright light but somewhat less than you would for established plants. Keep the potting medium moist but not constantly wet, and if the bromeliad is one of those that form a cup with their leaves, make sure you keep it filled with water. Once the pup is well rooted, move it to more light.

Adequate light is critical to getting the mature plant that grows from the pup to eventually bloom. Blooming, with good care, generally will occur one or two years after separation from the original plant. Most people have the best success getting a bromeliad to bloom when they put the plants outside during the warm months of April to October. A few hours of sun in the morning and shade the rest of the day seem to work well for many types of bromeliads. The abundant light, warmth and humidity encourages growth and makes blooming more likely to occur.

It’s nice to know that when you buy a bromeliad or receive one as a gift, if all goes well, you will end up with more plants than you started with. This is one of the great joys of growing bromeliads and why they are so much fun to collect. You always have extras to share with friends or trade for new types. And dividing bromeliad pups is a great way to develop your plant propagation skills. 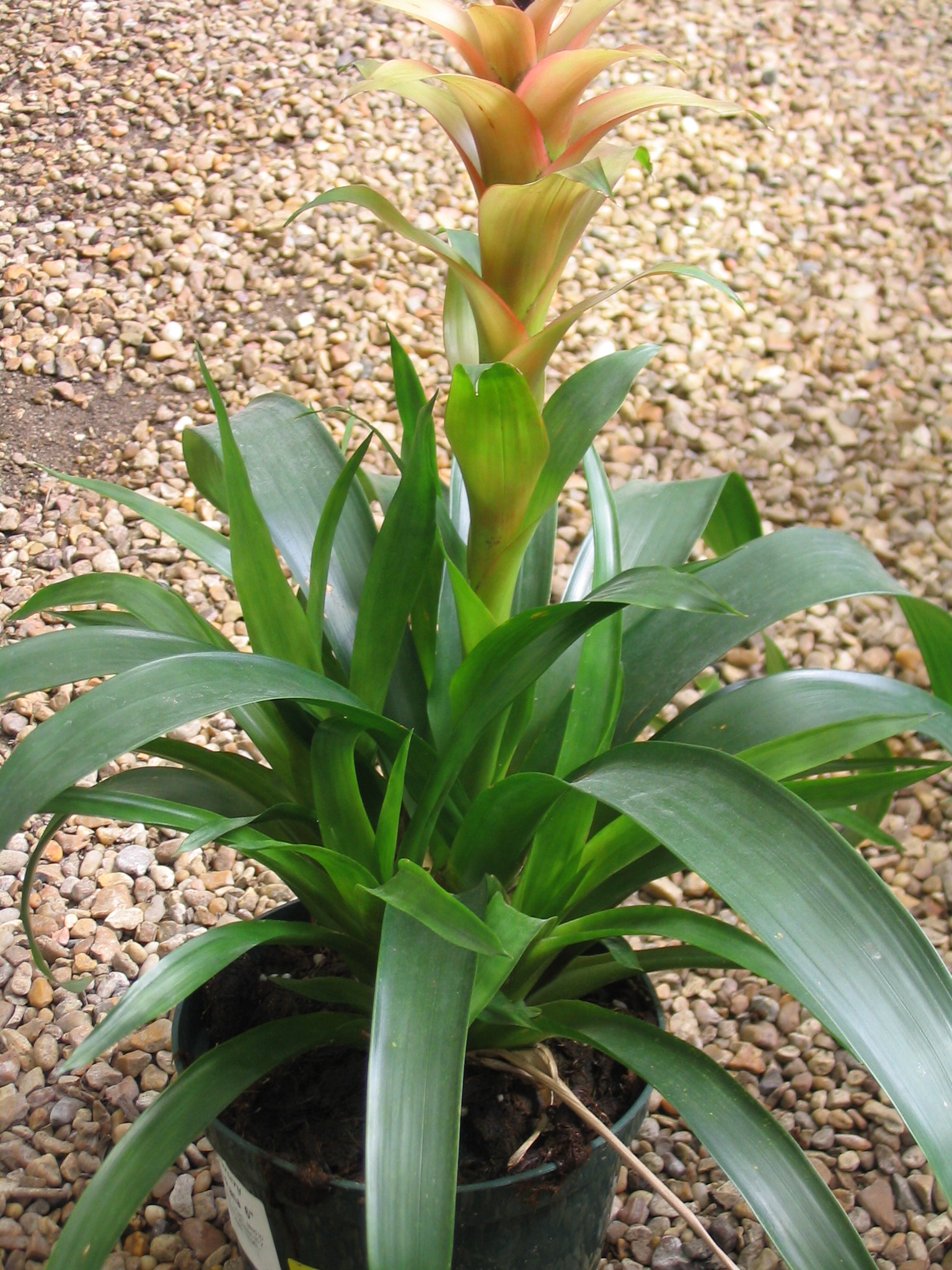 The brilliant red flower stalk of this Guzmania bromeliad has faded over time. Notice the numerous pups coming up around the original plant. These are ready to be separated and planted individually. Photo by Dan Gill/LSU AgCenter