(07/05/17) BATON ROUGE, La. — Nine LSU students journeyed to Mozambique in May to conduct marine research in the small coastal village of Praia do Tofo and in their month-long stay had encounters with whale sharks that one student described as almost spiritual.

“I was swimming eye to eye with it,” said Sydney Cottingham, a senior from Bowling Green, Kentucky, studying natural resource ecology and management in the LSU College of Agriculture. “It was breathtaking and humbling to be so close to something that majestic.”

Reagan Errera, assistant professor in the School of Renewable Natural Resources, led the field studies class. The group collaborated with researchers with All Out Africa, a nonprofit organization that implements social and conservation projects.

Errera is working with All Out Africa to conduct research on various species of phytoplankton, the microscopic plants of the ocean, in the area. Her main research focuses on identifying seasonal trends and the spatial extent of the neurotoxin domoic acid.

By identifying seasonal trends, she hopes to determine if human and wildlife health might be at risk. She said shellfish and finfish can accumulate domoic acid, leading to amnesiac shellfish poisoning.

Many tourists go to Tofo to see abundant marine life in the area such as whale sharks and large manta rays.

“Tofo has the largest known population of male juvenile whale sharks,” Errera said. Whale shark sightings have been declining over the past decade, and she is evaluating whether pulses and changes in the phytoplankton community could be contributing to the decline.

All students completed their own research study. “They all came up with a hypothesis, were taught standardized techniques and executed data collection and analysis over the three and half week course,” Errera said.

Cottingham was studying plastics at the bottom of reefs. She said she spent a lot of time sifting and baking sand with the goal of seeing how humans are affecting the reef. Another student, William Jackson, a recent graduate from the LSU College of Coast and the Environment, studied plastic found on the beaches.

“Even when you are studying animals, you can’t get away from the human side of it,” Cottingham said.

“We wanted to see if fishing nets were a danger to whale sharks or manta rays. Are the sharks encountering the nets?” Loschen said.

The students said they regularly encountered a whale shark they nicknamed Rodney who was missing his dorsal fin. Errera said it’s possible the shark lost its fin after being tangled in a net.

In conjunction with the course, most of the students received dive certification while in Tofo.

Courtney Murr, a senior from Denham Springs studying natural resource ecology and management, said she spent an hour in the water with Rodney. “It was amazing,” she said.

Cottingham said the experience helped her with science problem-solving skills. “The structure and theories are the same, but we had to adjust for the tools we had,” she said.

The students ended the trip with an excursion to Kruger National Park in South Africa, where they observed a wide variety of savannah wildlife species, including elephants, giraffes, cheetah, lions and a suite of antelope species. 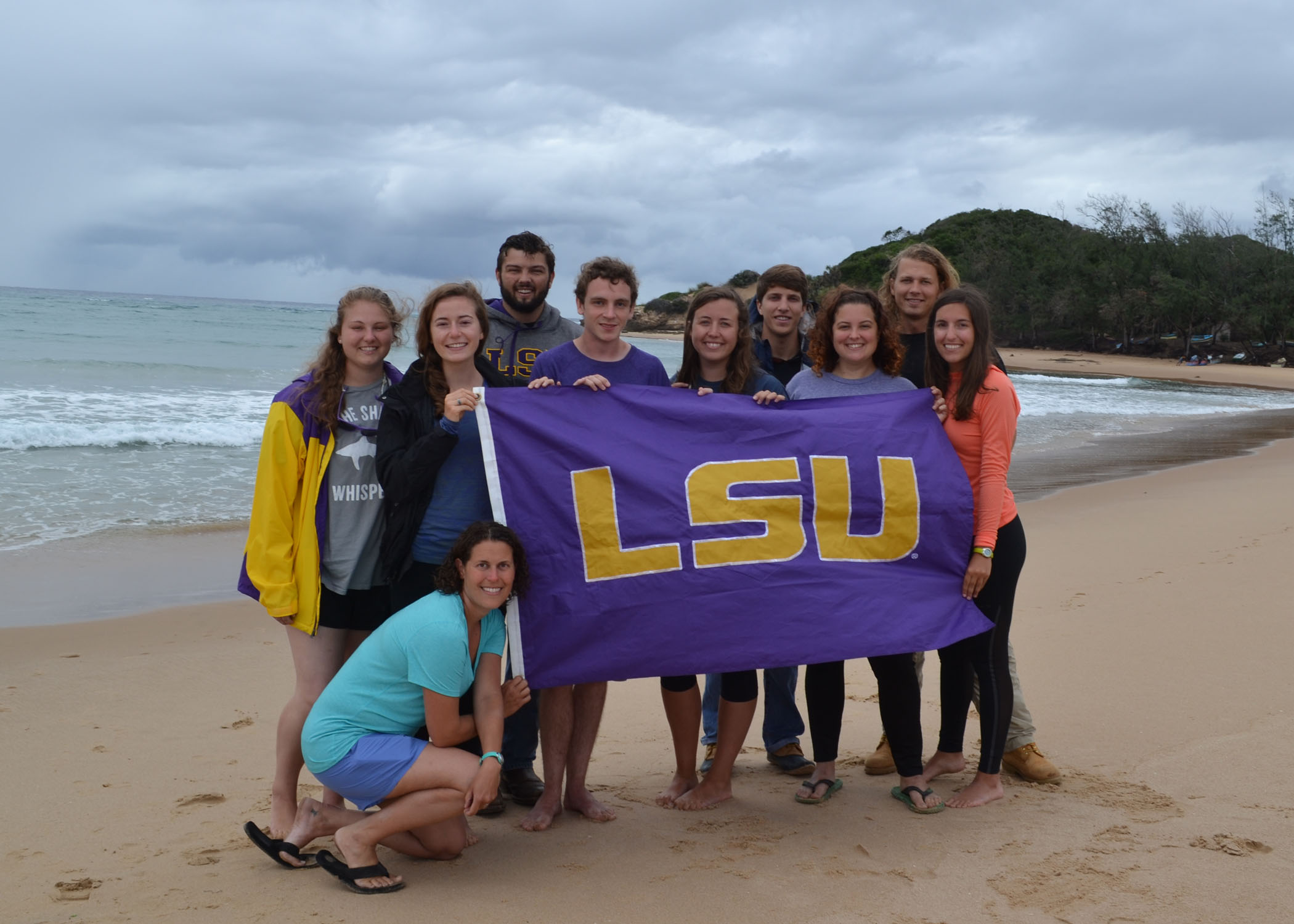 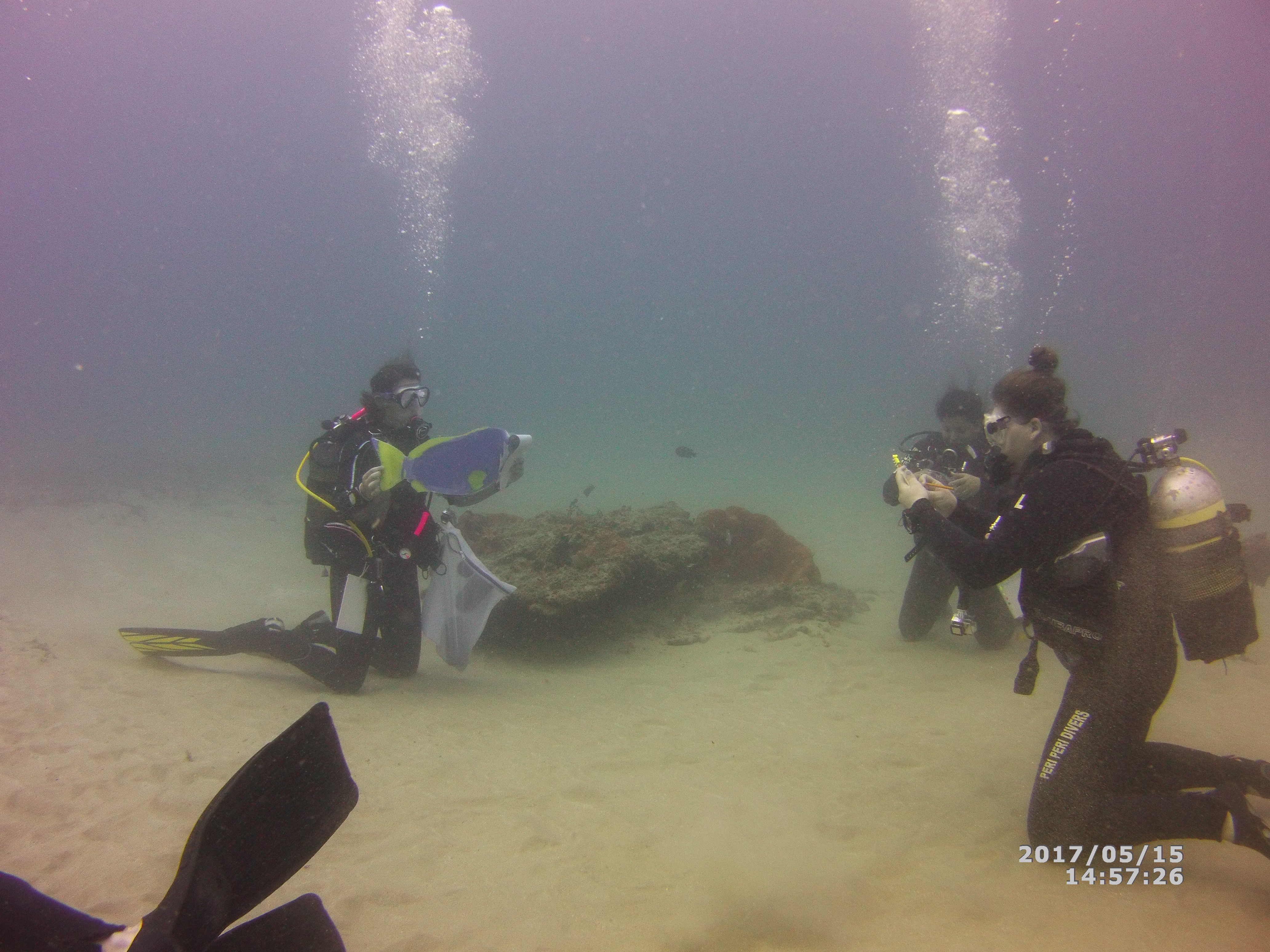 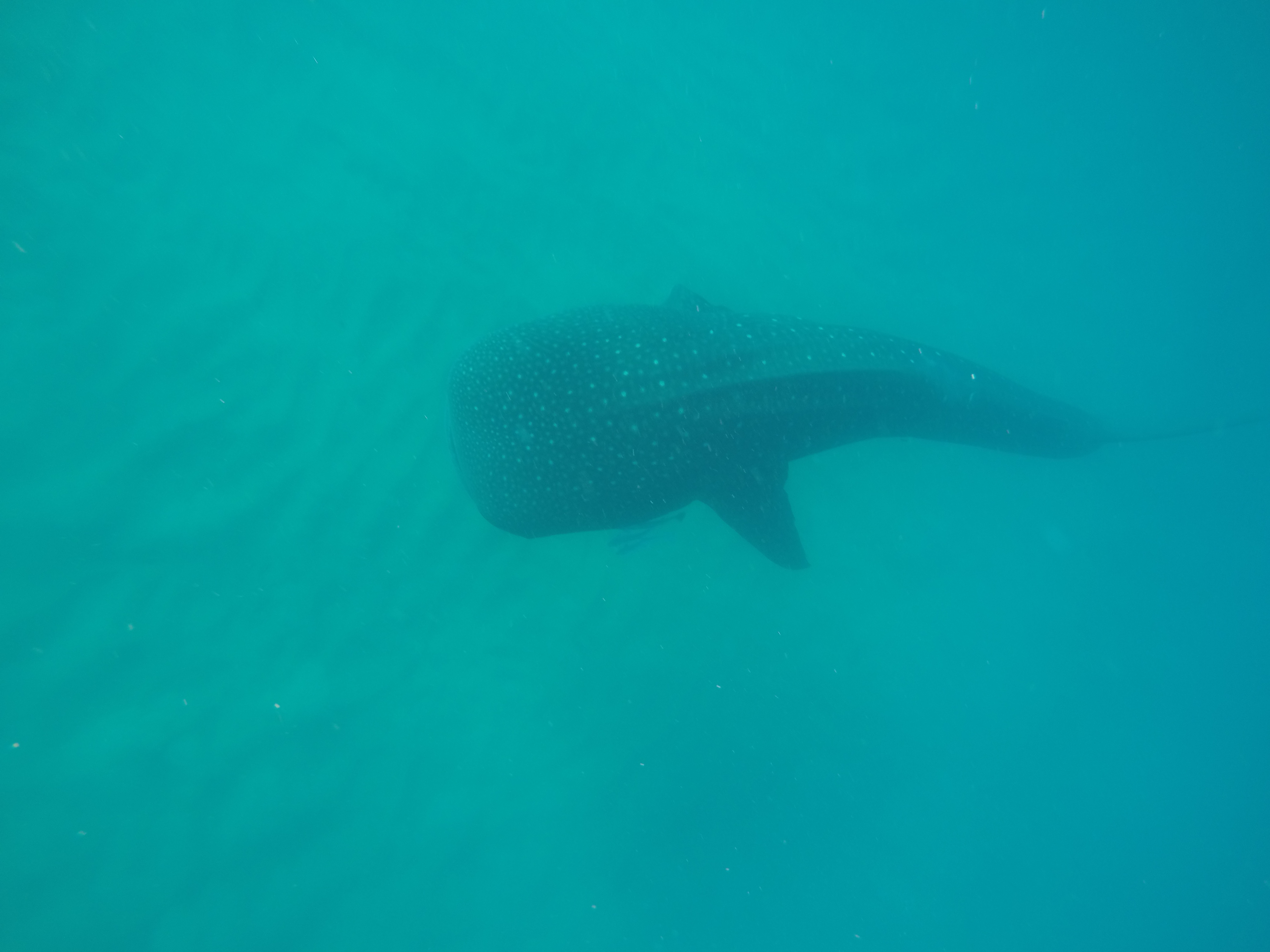 A whale shark, which LSU students named Rodney, swims off the coast of Praia do Tofo, Mozambique. The students were in Tofo to conduct marine research and regularly saw this whale while on dives. Photo provided by Reagan Errera