Eric Webster made the announcement on Jan. 17 at a rice producers meeting at the LSU AgCenter DeWitt Livestock Facility in Alexandria.

The Provisia rice technology is resistant to Provisia herbicide, quizalofop, already used on other crops.

The technology will allow farmers to control red rice that has become resistant to Clearfield herbicide, but badly infested fields will require a comprehensive approach that includes soybeans in rotation with Provisia, Webster said.

The herbicide is intended for controlling grasses, but mixing it with broadleaf herbicides can interfere with its effectiveness, he said.

AgCenter rice breeder Steve Linscombe said he has been working on Provisia rice for four years at the H. Rouse Caffey Rice Research Station near Crowley, and an experimental line has the potential to become the first Provisia variety.

“We’re hopeful to have a substantial seed increase this year, and it could be commercially available in 2018,” Linscombe said.

The line of Provisia rice has good quality with low chalk, he said. Millers will be pleased with the long grain length, over 7 mm, the longest kernel ever developed by the LSU AgCenter as a potential release, Linscombe said.

Work on a rice hybrid continues with promising results at the Rice Research Station under AgCenter hybrid breeder Jim Oard. “There’s a very good chance we will be releasing a hybrid in the very near future,” Linscombe said.

The AgCenter also held meetings for rice farmers in Welsh, Crowley, Ville Platte and Abbeville. Additional meetings are scheduled for Feb. 8 at 9 a.m. at the Rayville Civic Center and Feb. 23 at 5 p.m. at the St. Martin Parish extension office in Breaux Bridge.

AgCenter economists told farmers at the rice meetings not to expect any improvements in the low prices for their crop in the near future.

“I wish I had a little better news for you,” economist Kurt Guidry told rice growers at the meeting in Welsh.

Soybeans should stay above $10 a bushel, he said, because of Chinese demand.

Speaking at the Evangeline Parish meeting, economist Mike Deliberto said last year’s U.S. rice crop was one of the largest ever, with Arkansas increasing its acreage and California returning to an average crop after years of drought.

AgCenter plant pathologist Don Groth advised farmers to select disease-resistant varieties if they have had crops with disease problems in the past.

A new fungicide, Amistar TOP, has activity against sheath blight, blast and Cercospora. “It is possible but not assured that we will have a label in 2017,” Groth said.

AgCenter rice extension specialist and agronomist Dustin Harrell talked about his work to determine optimum nitrogen fertilizer rates. That work includes finding out how much nitrogen should be used for Provisia rice as well as for rice developed by private breeders and other universities.

The bird repellent AV-1011 will be available this spring for planting, and work continues on a variation of the repellent to be used on maturing rice, Harrell said. He also said federal authorities have approved a chemical to control feral hogs.

AgCenter rice breeder Adam Famoso said a new genetic marker system at the Rice Research Station helps in selecting crosses. “This allows us to screen the material before we put it in the field,” he said.

The equipment can analyze 40,000 samples per day.

LSU AgCenter entomologist Lina Bernaola, far right, talks about the South American rice miner, an insect that was found in many rice fields last year. Bernaola, speaking to farmers at the central Louisiana rice producers meeting on Jan. 17, said it’s not believed that the insect is a serious pest for rice. Photo by Bruce Schultz/LSU AgCenter 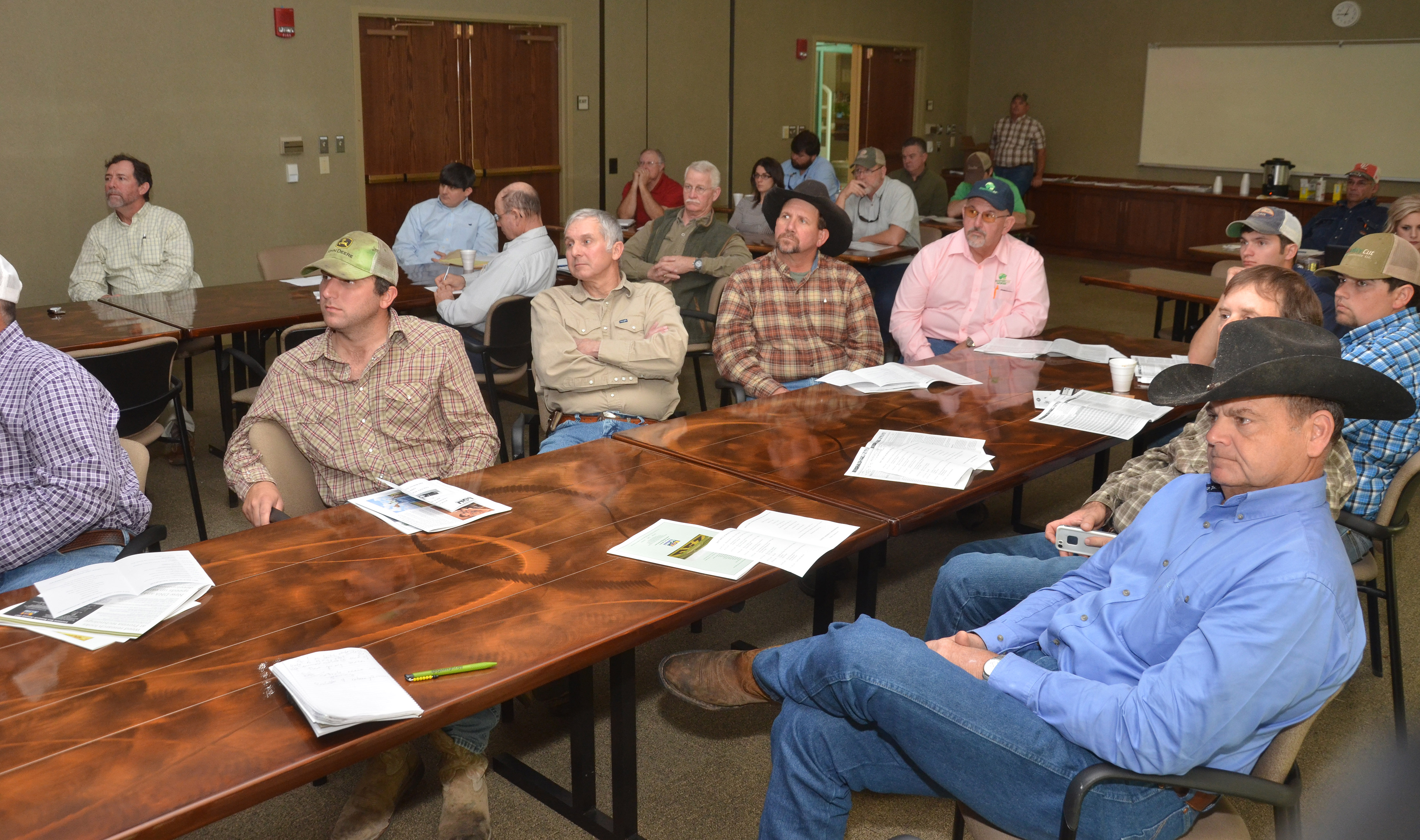 Farmers listen to LSU AgCenter rice experts at a meeting held in Abbeville on Jan. 12. Photo by Bruce Schultz/LSU AgCenter 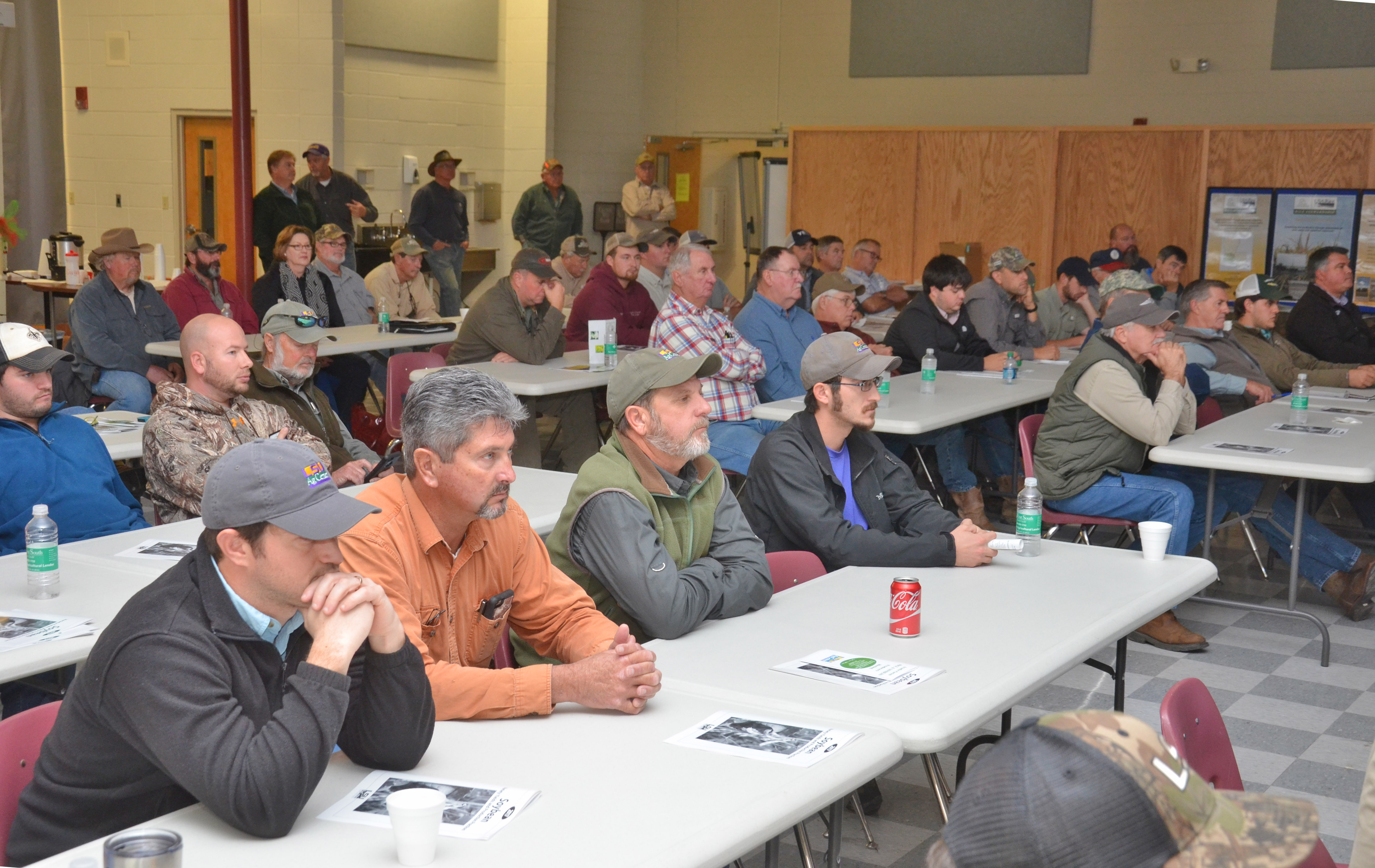 Farmers get updates on the latest rice production practices from LSU AgCenter scientists speaking at the Acadia Parish rice and soybean production meeting in Crowley on Jan. 5. Photo by Bruce Schultz/LSU AgCenter

Farmers hear about new developments for rice farming during a Jan. 10 meeting held in Welsh by the LSU AgCenter. Photo by Bruce Schultz/LSU AgCenter 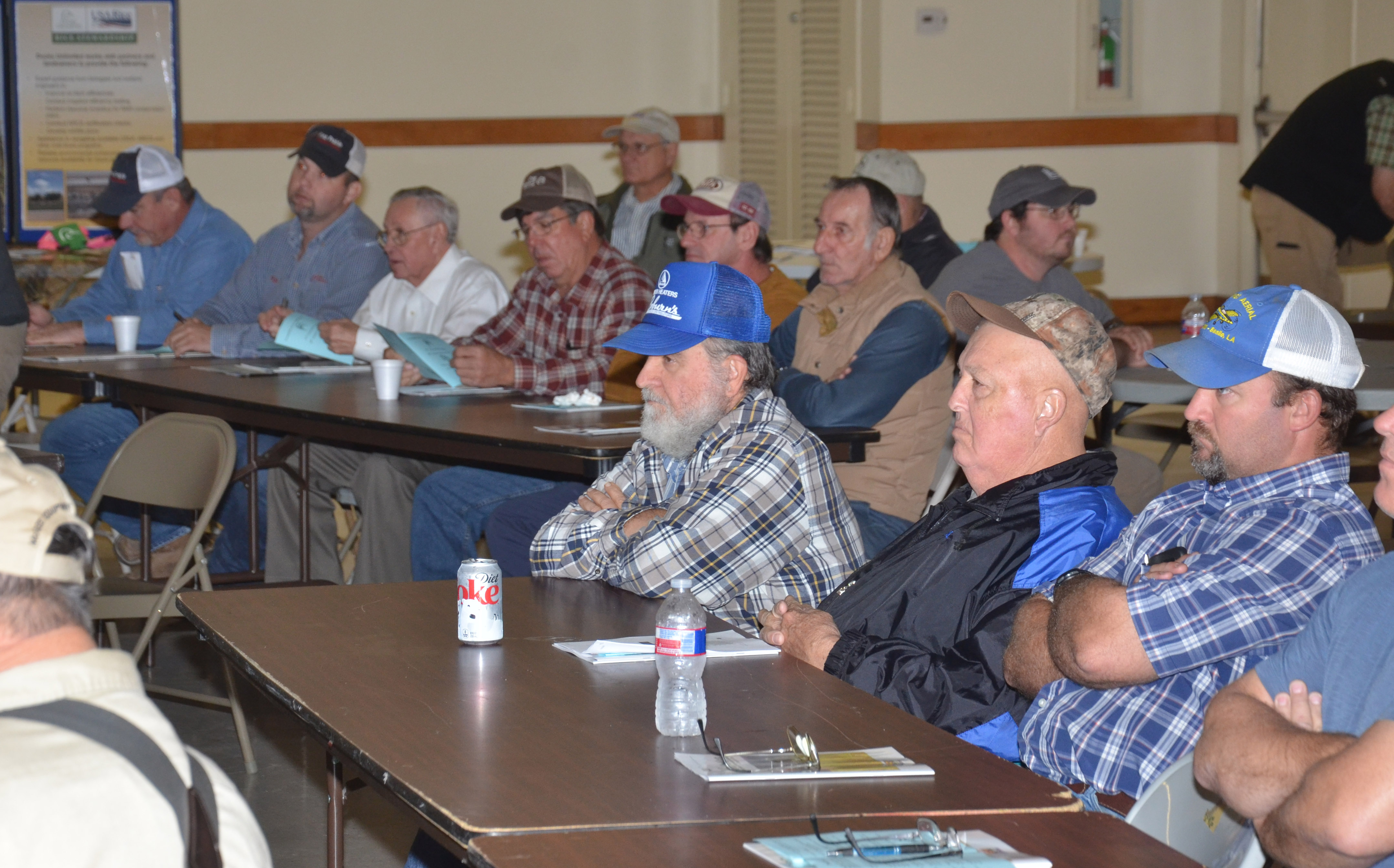 Farmers preparing for the 2017 crop get the latest information from the LSU AgCenter during a meeting in Ville Platte on Jan. 11. Photo by Bruce Schultz/LSU AgCenter