(09/07/16) BATON ROUGE, La. – A group of agriculture professionals from African government agencies and industry associations are visiting the LSU AgCenter to learn more about reducing crop losses after harvest, an issue they said is a key obstacle to food security in their countries.

The five visitors from Kenya, Tanzania and Senegal and are participating in the Cochran Fellowship Program, an outreach effort of the U.S. Department of Agriculture Foreign Agricultural Service aimed at educating foreign officials and professionals about American agriculture and modern technologies. LSU AgCenter International Programs is leading their training, which is focusing on postharvest loss reduction in horticultural and grain crops.

The visitors arrived in Baton Rouge on Sept. 4 and will be in the U.S. until Sept. 18. In addition to attending presentations and training sessions taught by AgCenter experts, they will travel around Louisiana and to central California to visit farms and storage and processing facilities.

“One of the goals of the Cochran program is not only the intensive two-week training program but also establishment of long-term linkages,” said David Picha, director of AgCenter International Programs. “We’re looking for long-term partners so that we can develop collaborative research and extension activities that are mutually beneficial for Louisiana agriculture and other countries.”

The participants discussed challenges farmers face in their countries during a panel discussion hosted by International Programs on Sept. 6. One of their top concerns is food security, which in many countries is a result of low farm production efficiency, high postharvest losses and a lack of modern technologies and storage facilities.

Senegal, for example, has been trying to increase rice production to meet the population’s demand without having to import the staple food from other countries.

“In Senegal, you have rice at lunch every day,” said Ndiaga Ndiaye, division chief with Senegal’s River Delta Land Management Corporation. But much of Senegal’s rice crop is grown by small-scale farmers and is not of good quality, said Ndiaye, whose organization promotes irrigation and other ways to improve rice farming.

In Kenya, corn is the main staple food crop and is not exported as part of a government effort to ensure enough is available for people to eat. Shortages still occur, however, meaning the domestic corn crop must be supplemented with imports, said Oswald Murithi Miriti, project officer with the Cereal Growers Association in Kenya.

Kenyan agriculture struggles with low productivity for many reasons, which include depending on rainfall for irrigation, changing weather patterns and soil acidity, said Jared Kiprotich Mutai, deputy county director of agriculture, livestock and fisheries in Nandi County, Kenya. He said food security has been a priority for his county government, which organizes farm demonstrations and field days to share information with farmers.

Another major problem – and the focus of the training at the AgCenter – is postharvest losses.

“We lose up to 30 or 40 percent of whatever is harvested at the farm level, and what is stored in our silos is also partially lost” due to grain breakage and pest infestations, said Simon Kamau Nguturi, operations manager of the National Cereals and Produce Board in Kenya, which is in charge of a network of storage facilities around the country.

Tanzania faces similar struggles. Because most farmers are small-scale and tend not use fertilizer, improved seed or irrigation, food security is a challenge, said Ikunda Terry, program manager with the Eastern Africa Grain Council in Tanzania.

After harvest, up to 40 percent of the crop can be damaged and rendered unmarketable, which is “a huge, huge loss,” he said.

The visitors said they’re hopeful their visit to the U.S. will help them learn ways mitigate those losses so their countries can move toward a more stable food supply.

“The fellows are leaders who play a significant role in their respective countries' growers associations, private industry and government. The training they receive from the LSU AgCenter will ultimately have a very positive impact on a great deal of people in Kenya, Senegal and Tanzania,” said Susan Karimiha, AgCenter International Programs coordinator.

Simon Kamau Nguturi, left, operations manager of the National Cereals and Produce Board in Kenya, talks about agriculture issues in his country as Ikunda Terry, center, program manager with the Eastern Africa Grain Council in Tanzania, and David Picha, right, director of LSU AgCenter International Programs, listen during an event on Sept. 6. Photo by Olivia McClure/LSU AgCenter 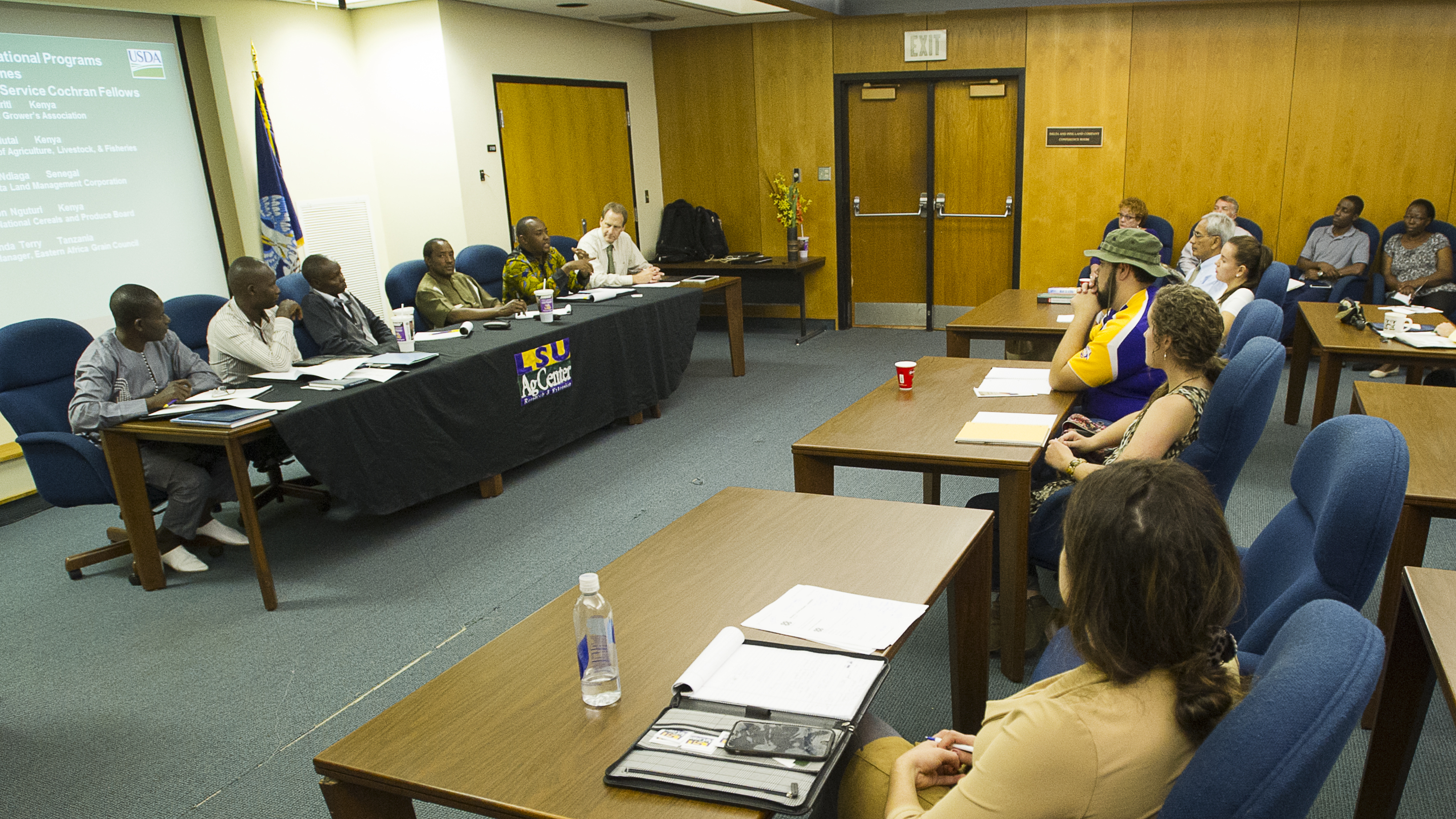 A panel of African agriculture officials, left, discusses issues in their countries during an LSU AgCenter International Programs event on Sept. 6. Photo by Olivia McClure/LSU AgCenter