You can see the immature zucchini fruit, which indicate this is a female flower. Photo by Dan Gill 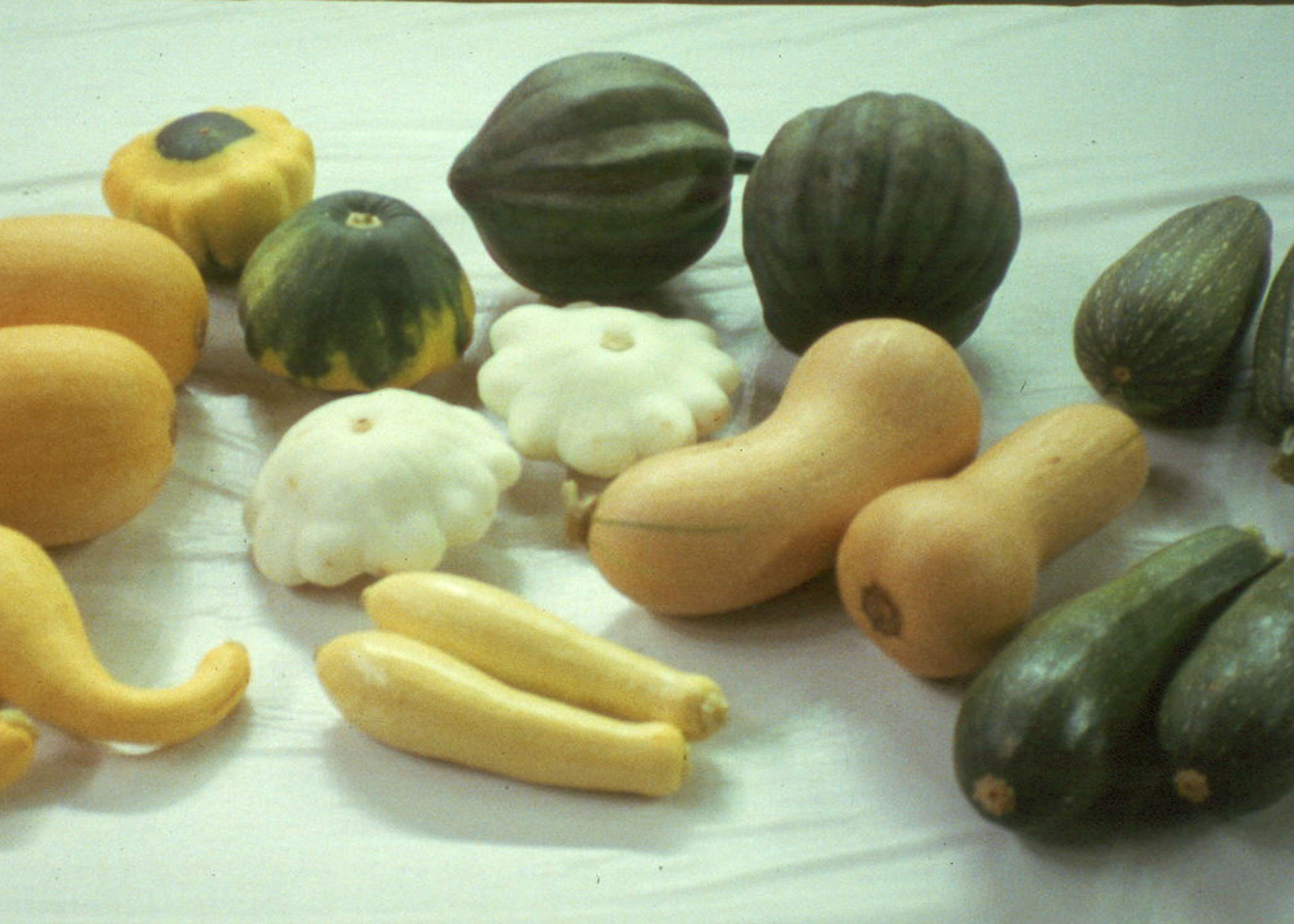 The cucurbits family includes a variety of summer squashes. Photo by Dan Gill. 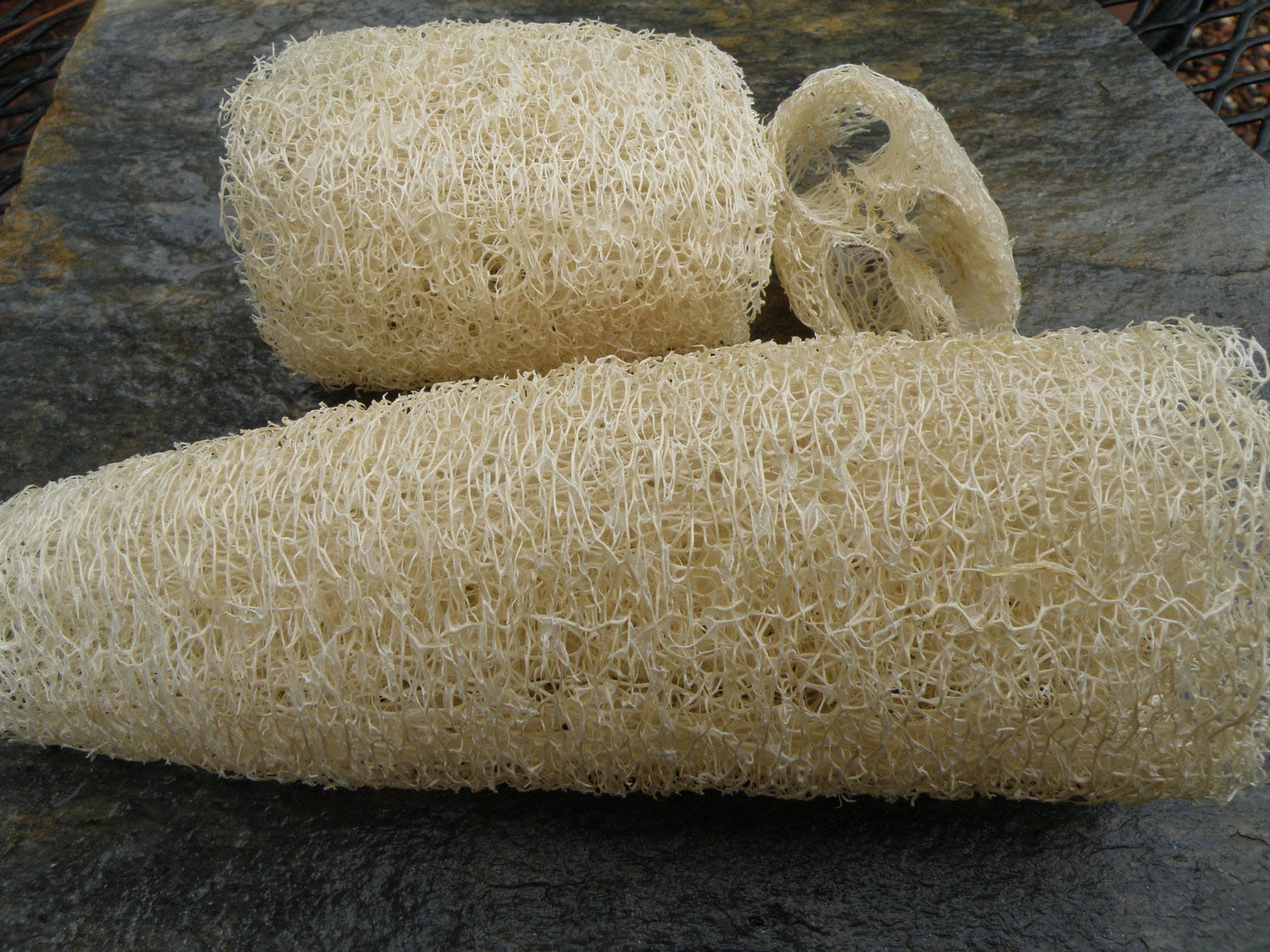 The insides of a ripe luffa gourd make a fibrous sponge. Photo by Dan Gill

The cucumber family, properly known as the Cucurbitaceae, provides a wide variety of vegetables popular for the spring, summer and fall home vegetable garden. Members of the cucumber family, known as cucurbits, can be planted now. They include summer squash, zucchini, winter squash, mirliton, pumpkin, gourd, cucuzzi, watermelon, cantaloupe, cushaw, luffa and, of course, cucumber.

All of these vegetables produce vines that run along the ground or climb. Summer squash and zucchini vines are rather short and thick, and so are more bush-like than other commonly grown members of the family. Some dwarf or “bush” types of cucumbers and other cucurbits also may be available.

Members of the cucumber family produce separate male and female flowers, but they both occur on the same plant. Pollen must be transferred from the male flowers to the female flowers to obtain fruit. Pollen transfer is done by bees and other insects, so it is extremely important not to spray insecticides in the morning when bees are most active. Wait until late afternoon or early evening if insecticides must be used.

Male flowers produce the pollen that fertilizes the eggs in the ovary of the female flowers, which leads to fruit formation. (It is the fruit of these vegetables that we harvest to eat.) It is important to understand that only the female flowers actually develop into fruit.

Cucumbers, for instance, produce enormous numbers of male flowers compared to female flowers. I have talked to many gardeners who thought they were about to see a bumper crop of cucumbers, only to watch in stunned disappointment as many of the flowers fell off without producing cucumbers.

Squash are among the most popular and productive of the warm-season vegetables. Most families need to plant only a few plants to supply themselves with an abundance of squash, and now is an excellent time to plants seeds or transplants into the garden.

Short-vine, bushy summer squash plants are rather large – 24 to 36 inches across – so make sure you space them properly in the garden. The fruit is harvested immature while it is young and tender – your thumbnail should easily penetrate the rind. Commonly grown summer squashes are yellow crookneck, yellow straightneck, zucchini, scallop and cocozelle.

Winter squash usually have a more vining growth habit and need more room than summer squash to grow. Allow the fruit to remain on the vine until fully matured when the rind is hard and you cannot penetrate it with your thumbnail. The term winter squash does not refer to when they are grown but rather to the fact that the fruit store well into winter. Examples of locally grown winter squash are pumpkin, butternut, acorn, Turk's turban and Hubbard.

Cucumbers are generally an easy vegetable to grow. Transplants are usually available. But as with most cucurbits, they are easily grown by planting seeds directly into the soil. Most gardeners allow cucumber vines to grow along the ground, but it is highly recommended that you trellis them. Provide a sturdy trellis 3 to 4 feet tall and space plants along the base about 6 inches apart. Tests conducted at LSU AgCenter research stations show substantial yield increases for trellised cucumbers as well as fewer disease problems and better quality fruits.

One of my favorite members of this family is the luffa gourd. Very easy to grow, luffa seeds may be planted directly into the garden now at the base of a 6-foot trellis, thinning the plants to 1 to 2 feet apart when they come up.

This vine does triple duty in the garden. With attractive green leaves that stay healthy all summer and large, bright yellow male flowers, it is good-looking enough to be used as an ornamental annual vine. In addition, the fruit is edible when 6 to 8 inches long and can be sliced, breaded and fried like okra. Indeed, two old common names for this gourd, climbing okra and Chinese okra, refer to its similarity to okra in flavor when fried.

When the gourd is mature and turns brown, the skin can be peeled away to reveal the most remarkable aspect of this plant – a tough network of fibers that make an excellent sponge. When a plant will provide beautiful flowers, edible fruit and a sponge to clean up with, well, you can’t ask much more than that.