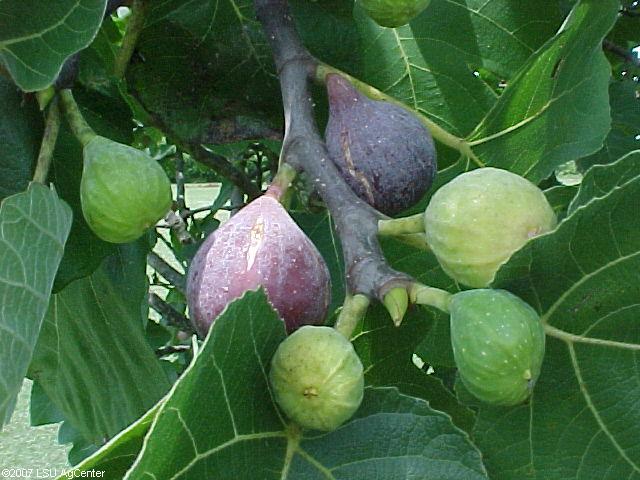 Ripening figs are a common sight in Louisiana gardens. Photo by Allen Owings

(04/01/16) HAMMOND, La. – Figs have been an important fruit crop in Louisiana for over 150 years and are one of the most popular small fruit crops grown in the state, according to experts in the LSU AgCenter.

“Figs are one of our lowest-maintenance fruit trees,” said AgCenter horticulture instructor Jason Stagg. They are relatively easy to grow and can easily fit into an organic food production system.

“Figs join blueberries and citrus as the most sold fruit plants at garden centers in Louisiana,” he said.

Louisiana retailers sell about 10 to 15 varieties of fig trees, but some individuals and small nurseries have many additional varieties ranging up to as many as 60 to 100, Owings said.

Interest continues to grow about fig varieties that perform well in Louisiana – not only those released previously by the AgCenter but also some of the historically important older varieties, Owings said.

The AgCenter has a history in fig breeding and related research dating back to the 1950s, he said.

The AgCenter started the initial fig breeding program to develop varieties for the Gulf South region under the longtime leadership of horticulturist Ed O’Rourke. “Elite selections from this program were evaluated and maintained over the years by interested university cooperators and at AgCenter experiment stations in Hammond and Port Sulphur,” Owings said.

After being dormant for a number of years, the AgCenter renewed the process of selecting potential varieties in the 1990s under the leadership of AgCenter horticulturist Charlie Johnson. Since then, the AgCenter has released new varieties named Champagne, LSU Gold, LSU Purple, O’Rourke, Tiger and Scott’s Black.

“These selections are distinct from other available fig cultivars and offer a unique blend of color and size for commercial and residential use,” Stagg said. They enhance the diversity of fruit characteristics offered for sale and produce larger, good-quality fruit that can increase demand for retail sales.

The new releases also extended the harvest season for figs.

“In addition to these six varieties, several other unnamed figs from the LSU program have been grown and distributed by fig enthusiasts over the years,” Stagg said.

The AgCenter now has one of the few accurate “true to type” fig variety collections in the Southeast, Owings said.

The fig research program and orchard are being relocated from the AgCenter Botanic Gardens at Burden in Baton Rouge to the Hammond Research Station. “The newly planted research orchard in Hammond will serve as an accurate germplasm collection, which will allow industry cooperators to obtain cuttings of desired varieties for 10 to 20 years into the future,” Stagg said.

Because figs are easily propagated and can be grown to a saleable tree in about 10 months, this should present a good opportunity for local plant nurseries, he said.

In addition to LSU releases, other commonly available fig varieties in Louisiana include Celeste, Southeast Brown Turkey and Texas Everbearing.

The AgCenter has a helpful publication on growing figs in commercial or backyard settings.