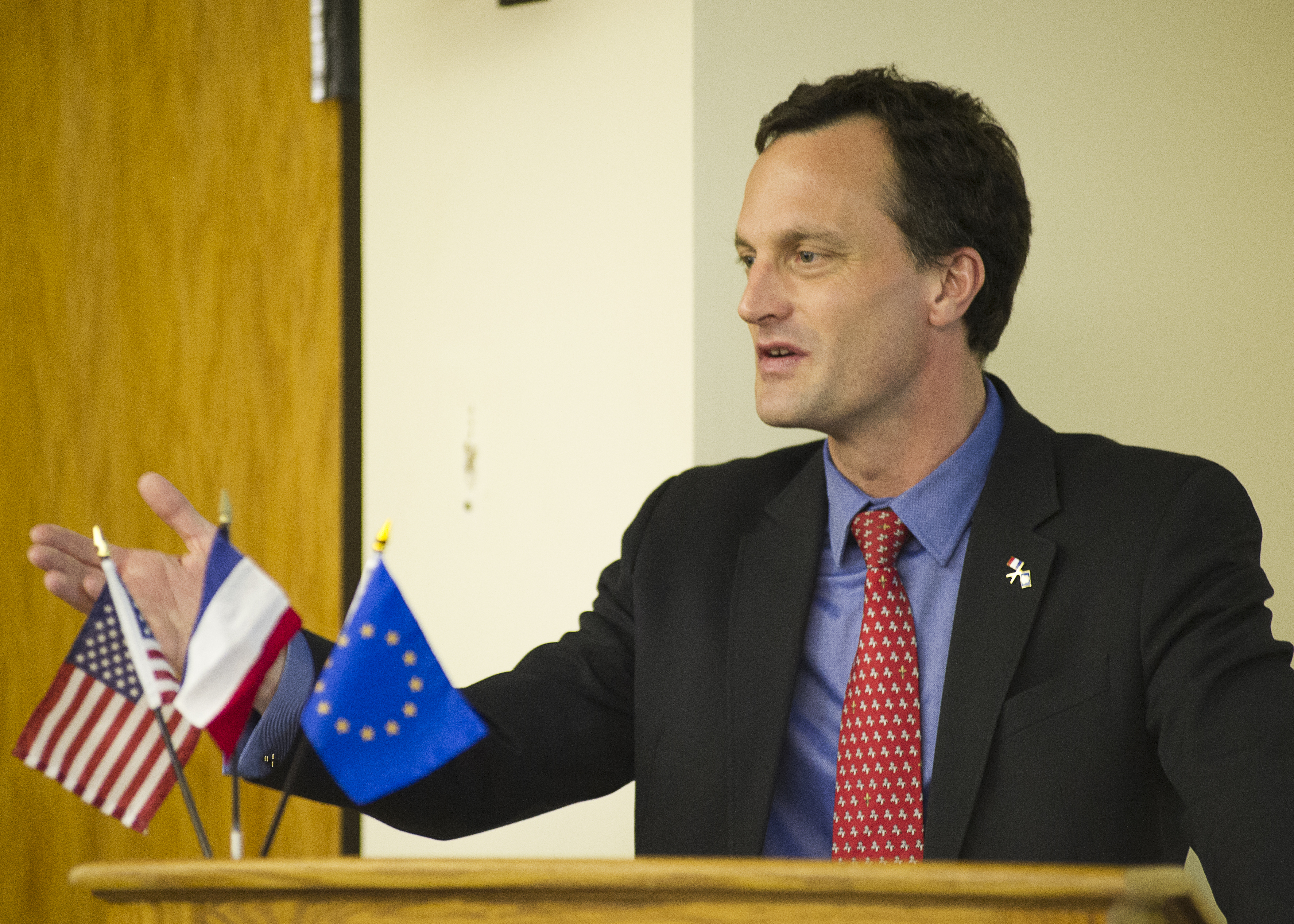 Consul General of France in Louisiana Grégor Trumel speaks during the LSU AgCenter’s Global Agriculture Hour on Feb. 25. Trumel visited Baton Rouge and the LSU AgCenter recently to learn more about the state’s agriculture industry and opportunities for collaboration between the U.S. and France. Photo by Olivia McClure/LSU AgCenter 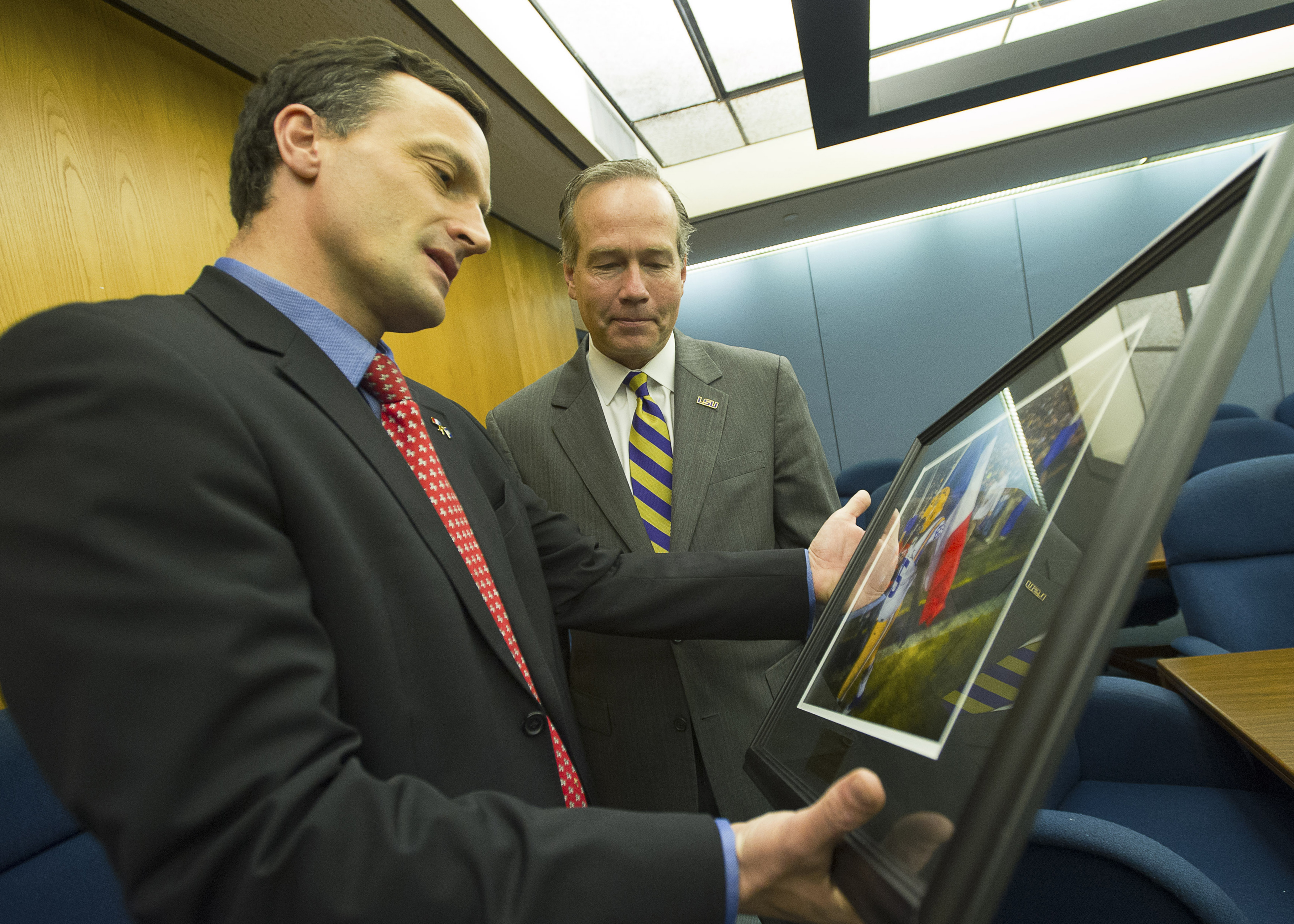 Consul General of France in Louisiana Grégor Trumel, left, looks at a framed photo presented to him by LSU President F. King Alexander, right. The photo shows LSU football players carrying the French flag onto the field this past season to honor the victims of the Nov. 13 Paris terrorist attacks. Photo by Olivia McClure/LSU AgCenter

(02/26/16) BATON ROUGE, La. – A French official who visited the LSU AgCenter recently hopes to leverage the cultural ties between France and Louisiana to collaborate on projects that would benefit the agriculture industries in both places.

Speaking at a Feb. 25 event hosted by AgCenter International Programs, Grégor Trumel, the consul general of France in Louisiana, said agriculture is an important economic force in France that also has a global reach through well-known French products, such as wines and cheeses.

France ranks sixth in the world for agriculture production and accounts for 16 percent of all agricultural land in the European Union, said David Picha, director of AgCenter International Programs. Half of France is agricultural land, and 30 percent is forests.

The French agriculture sector is diverse, presenting “many opportunities for collaboration and mutually beneficial growth,” Picha said. “We’re looking for opportunities to expand connections with institutions in France and French-speaking countries.”

Trumel, who has been consul general since 2014 and is based in New Orleans, praised the contributions of LSU and the AgCenter to economic development in the state. As in Louisiana, agriculture is a critical part of France’s economy and culture, Trumel said.

“Agriculture is not just business,” he said. “That’s territorial management, that’s landscapes, that’s a way to manage environment and maintain the countryside.”

France is noted for its wines – one of its top exports to the U.S. – but it is also a leading producer of grains in Europe, including wheat, corn and barley. Some rice is grown in the southeast of the country in a coastal area similar to the Mississippi River Delta. Meat and dairy are also important commodities.

French agriculture production is worth about $82.6 billion annually, Trumel said. Food processing brings in another $184 billion, along with 545,500 jobs.

French farms are generally smaller than American farms, but they are becoming larger and fewer in number. The loss of rural farmland is a concern, Trumel said, because of its importance to French life.

The economies of many rural areas depend heavily on their production of French products that are popular worldwide.

Certain wines and cheeses can be produced only in designated areas according to specific regulations laid out in a geographic protection law. Genuine champagne, for example, can only be made in one area of northern France that is about the size of a Louisiana parish, Trumel said.

Protecting French values about food and farming has become an issue in recent trade negotiations between the U.S. and EU, he said. Proposed standards of the Transatlantic Trade and Investment Partnership, which is a free trade agreement in the works between the countries, could be at odds with the EU’s ban of genetically modified crops and European consumers’ desire for traceability.

Currently, about one-third of global trade takes place between the U.S. and EU, Trumel said.

The EU, which is made up of 28 countries, exports $21.2 billion of agricultural goods to the U.S. annually. American agricultural exports to Europe, which include nuts, soybeans and processed foods, are valued at $13.8 billion annually.

Trumel said he hopes French institutions and the AgCenter will take advantage of the two countries’ already-close relationship and consider launching collaborative research and education efforts.

“The consul general of France in Louisiana was able to see that we have a very good business climate for investment in Louisiana in the areas of food, fiber an fuel,” said Susan Karimiha, AgCenter International Programs coordinator. “We showed him the synergy between research, teaching and extension activities of the LSU AgCenter, which leads directly to economic development and investment in our state.”

“We also have a large population of French speakers in Louisiana and a history with France, which makes us especially competitive in the international arena,” said Michael Vincent, a postdoctoral researcher at the AgCenter’s Audubon Sugar Institute, who is a French speaker.

While in Baton Rouge, Trumel met with LSU President F. King Alexander, who presented the consul general with a framed photo of LSU football players carrying the French flag onto the field during a game this past season to honor victims of the Nov. 13 Paris terrorist attacks. Trumel also met with officials at the Louisiana Department of Agriculture and Forestry.