​Making Pruning Cuts to Get the Results That You Want

Late winter, shortly before plants break dormancy, is a common time to prune ornamental plants that bloom on new growth, such as crape myrtles, chaste tree (vitex), rose-of-Sharon (althea), American beautyberry, and “everblooming” roses such as hybrid tea, grandiflora, and Knock Out roses.

We sometimes discuss ways of pruning specific plants, but here, I want to talk about some basic pruning principles.

Training and pruning of ornamental plants depend largely on personal preference. Understanding how plants respond to pruning cuts can help you get plants to grow in the way that you desire.

When you make a heading cut, or one in the middle of a trunk or branch, you release what’s called apical dominance. The terminal bud of a shoot produces a hormone called auxin that suppresses growth of lateral (side) buds. When you remove the end of the shoot, the growth of lateral buds is no longer suppressed by auxin produced by the terminal bud. Lateral buds typically break and produce an abundance of new side branches.

If you want to reduce the overall size of a plant but don’t want to cause a proliferation of new shoots near the sites of the cuts, you can make cuts just above where a lateral branch already emerges. A rule of thumb is to cut back to a branch that is at least one-third to one-half of the diameter of the part that you’re removing.

Another approach that avoids encouraging abundant shoot proliferation is to cut branches back to their points of origin. This is called making a thinning cut.

When you make a thinning cut on a trunk or large branch, try to make it just outside of what’s called the branch collar. Branch collars are more easily observed on some plants than others. When visible, the branch collar can be seen as a bulge near the base of the branch.

Cutting outside of the branch collar, rather than either leaving a stub or making a flush cut, helps the plant compartmentalize the wound left by the pruning cut.

Even if the branch collar isn’t visible, you may be able to see the bark ridge, which is found on the upper side of the junction between two branches, or between a branch and trunk. The cut can be made at a 45-degree angle from the bark ridge.

Keep in mind that a lot of pruning can be avoided by spacing plants according to their expected mature size (width and height) at the time of planting. For plants near houses, a rule of thumb is to space them half of their mature width plus one foot from the house. This allows for air flow around and access to the side of the house. 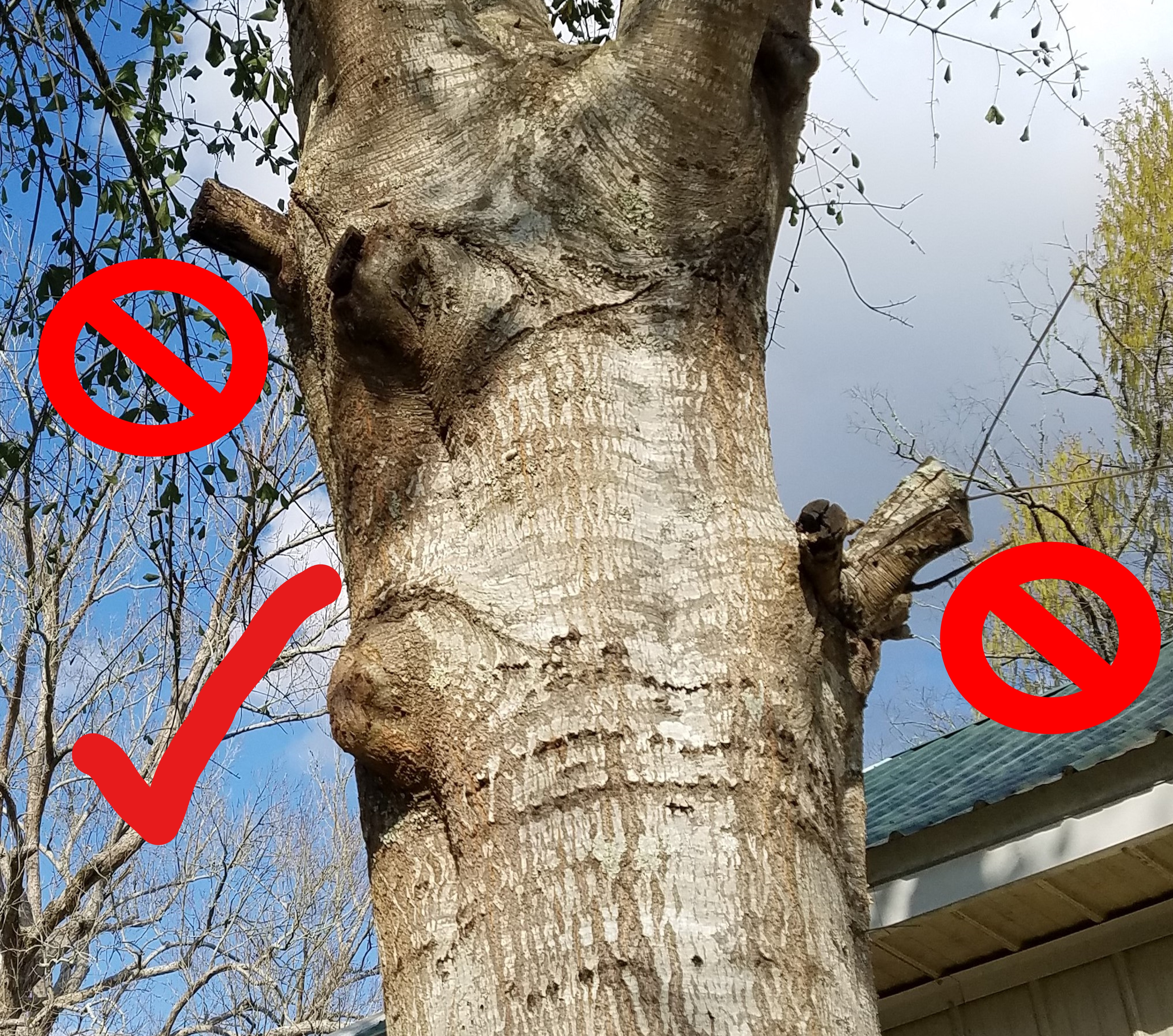 Stubs were left when branches were cut from the right and upper left sides of the trunk, and the tree has not been able to compartmentalize those wounds. The cut on the lower left allowed the tree to compartmentalize. Cuts should be made just outside of the branch collar. (Photo by M.H. Ferguson)