Choose a Pear Variety Suited to Our Climate

I recently pulled out one of my favorite cookbooks to see what would be involved in making our traditional Thanksgiving dressing. (I think I can do it!)

My grandmother gave me this cookbook in 2006, and in the back, I wrote down her recipe for pear preserves. When she was younger (well, younger than 80 or so), she would often get local pears and make pear preserves, which was one of my favorites.

Pears are one of those fruit crops than can be grown fairly easily here, but selecting an appropriate variety is really important.

One the most important factors in determining what pear varieties are suited to the Deep South is resistance to the bacterial disease fire blight. This disease affects several types of fruit crops, including apple, mayhaw, and occasionally loquat, in addition to pear.

It causes blighting of limbs, which often take on a shepherd’s crook appearance, and if severe enough can kill tree. The rainfall and temperatures that we experience when fruit trees are in bloom – which is a time that new infections occur – help make our climate highly favorable for fire blight.

A common mistake is to choose a pear variety like Bartlett that has good eating quality but is poorly suited to our climate. Bartlett is highly susceptible to fire blight.

Pear varieties recommended for this area may get fire blight to some extent but are typically resistant enough to survive and continue producing crops.

Most pear varieties suited to our area have both European pear (Pyrus communis) and an oriental pear species (Pyrus pyrifolia AKA P. serotina) in their genetic background and are known as oriental hybrid species.

Retired LSU fruit crops professor Dr. Charlie Johnson says that Kieffer and Orient are the varieties that he has observed produce most reliably in Louisiana. These are both “hard” pears. While it’s generally suggested that two varieties of pear be planted, both Kieffer and Orient can produce a crop without cross pollination.

Other pears suggested for southern Louisiana include Baldwin and Spalding.

Pineapple, Hood, and Flordahome have performed well in climates similar to that of southern Louisiana, though these may bloom too early in some years due to their low chilling requirement and thus have flowers killed by a late frost. Ayers, Maxine, and Moonglow are suggested for northern Louisiana but require more chilling hours than we can count on getting in southern Louisiana.

In general, pears need to be harvested before they’re soft and allowed to finish ripening off of the tree. If they’re left on the tree too long, their quality becomes poor. Pears should be harvested when they’re full-sized and about the firmness of a softball. Wait until lenticels – the small “dots” on the fruit through which air exchange occurs – turn from white to brown. In some varieties, you may be able to see the ground color of the fruit turn from green to yellow-green at this time.

Once they’re harvested, pears can be allowed to ripen at room temperature and then, if needed, stored in the refrigerator.

Soil pH for pear trees should be around pH 6.0 to 6.5. They should be planted in full sun for maximum production.

As is the case with the ornamental Bradford pear, edible pears tend to grow upright and have branches with narrow crotch angles and thus weak attachments to the trunk. When trees are young, they can be trained so that branches will have a wider crotch angle (roughly 45 to 60 degrees from vertical) and not be as likely to break off under a heavy crop load. Toothpicks (for very young trees), clothes pins, string, or homemade weights can be used for this purpose. Make sure that any string is removed before it has a chance to girdle the limb. 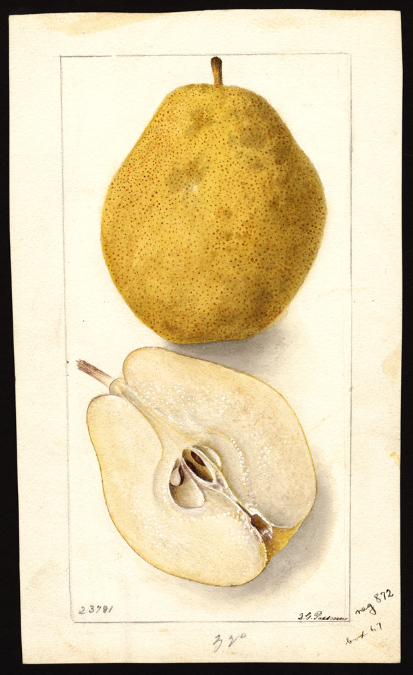 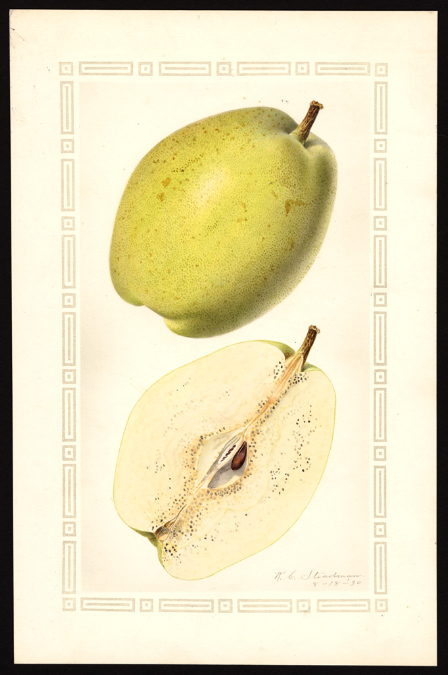