‘Tis the Season for Armillaria Mushrooms

A lot of people have noticed clusters of brown mushrooms in their yards within the past few weeks. Some of these have been mushrooms of Armillaria and Desarmillaria fungi (hereafter referred to as Armillaria for simplicity).

These mushrooms often appear in the fall, when temperatures and moisture conditions are favorable for their development. Where mushrooms are observed, the fungus has likely been present belowground for quite some time.

Armillaria fungi cause root rot on a number of woody plants. Armillaria root rot is also known as oak root rot. As you might guess from this name, it often affects oaks, but it occurs on many other trees and shrubs as well.

The fact that mushrooms are growing in the yard doesn’t necessarily mean that one of your living trees or shrubs is infected with Armillaria. These fungi can also grow on dead wood, such as decaying roots of trees that are no longer present.

A couple of questions I’ve been asked recently include whether a fungicide should be sprayed on mushrooms to get rid of them and whether the mushrooms should be removed to prevent spread. The answers are, respectively, “no” and “it’s probably not worth it.”

Mushrooms – the reproductive structures – are the tip of the iceberg. The bulk of the fungus is underground. Applying a fungicide to the mushroom would not get rid of the fungus.

The mushrooms mature, release spores, and die within a fairly short period of time. While spores are one way that the fungus can be dispersed, fungal strands growing underground on dead or diseased wood are the more significant means of spread.

When trees or shrubs are affected by Armillaria root rot, one can often find white “mycelial fans,” or layers of fungal growth, under bark at the base of the plant. If a plant in your yard dies from Armillaria root rot, the main action to take to prevent infection of other plants is to remove the stump and large roots of the diseased plant.

Peach orchards often suffer significant damage from Armillaria root rot. Research done in South Carolina has shown that a technique called above ground root collar excavation improves survival rates of newly planted peach trees. This involves planting trees on raised berms and then removing soil from around the root collar after trees are established. By reducing contact between the root collar and soil where the fungus is found, infection can be delayed or prevented. 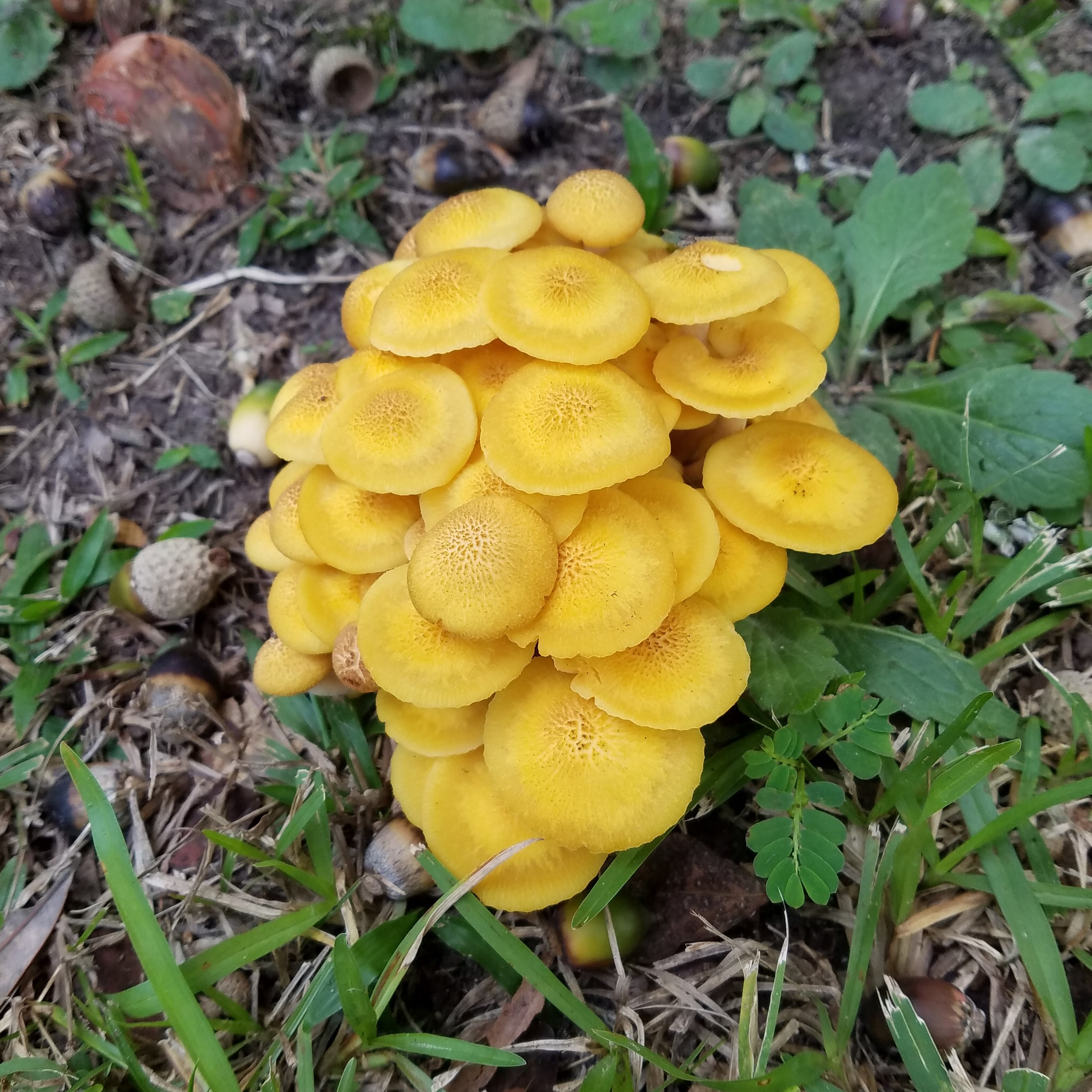 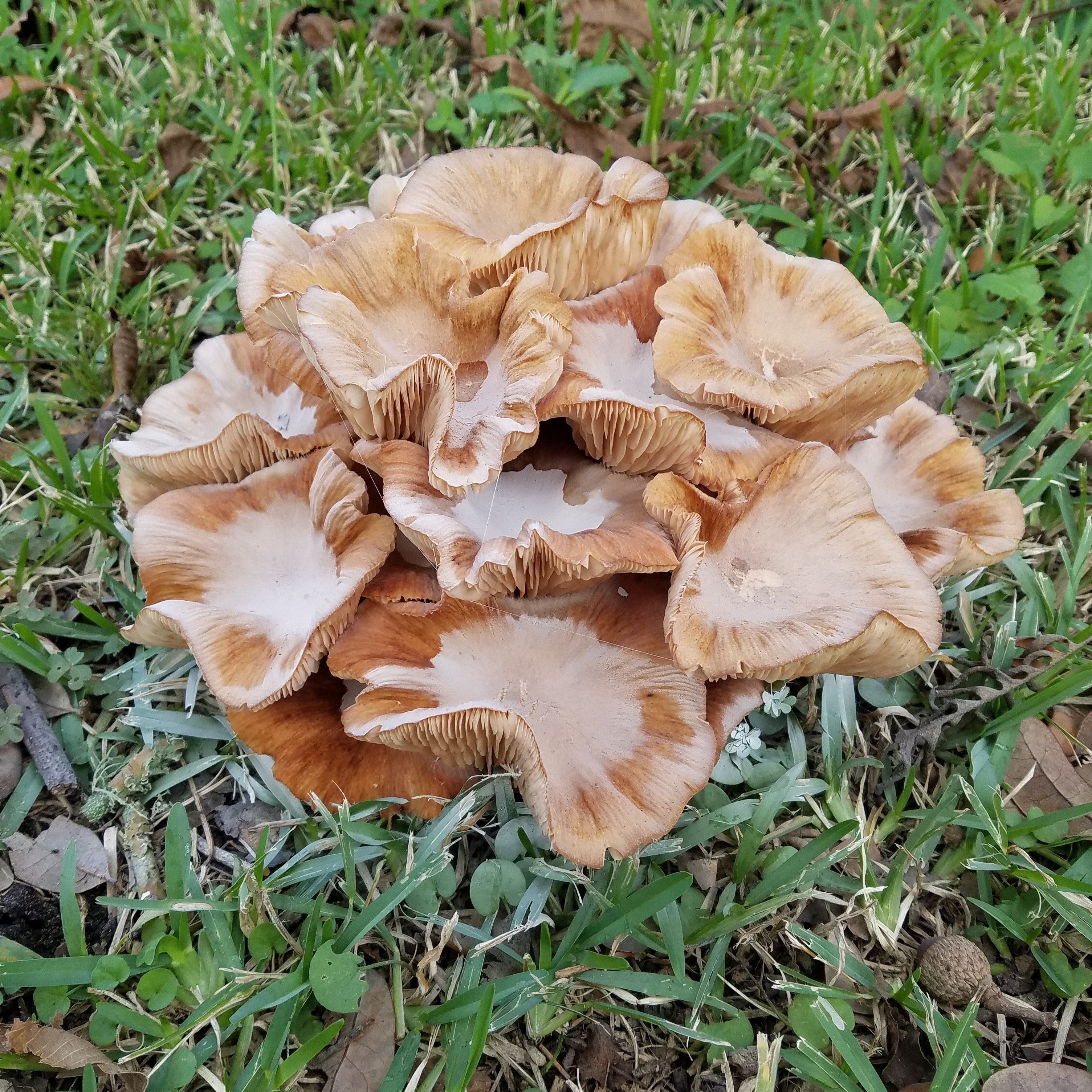 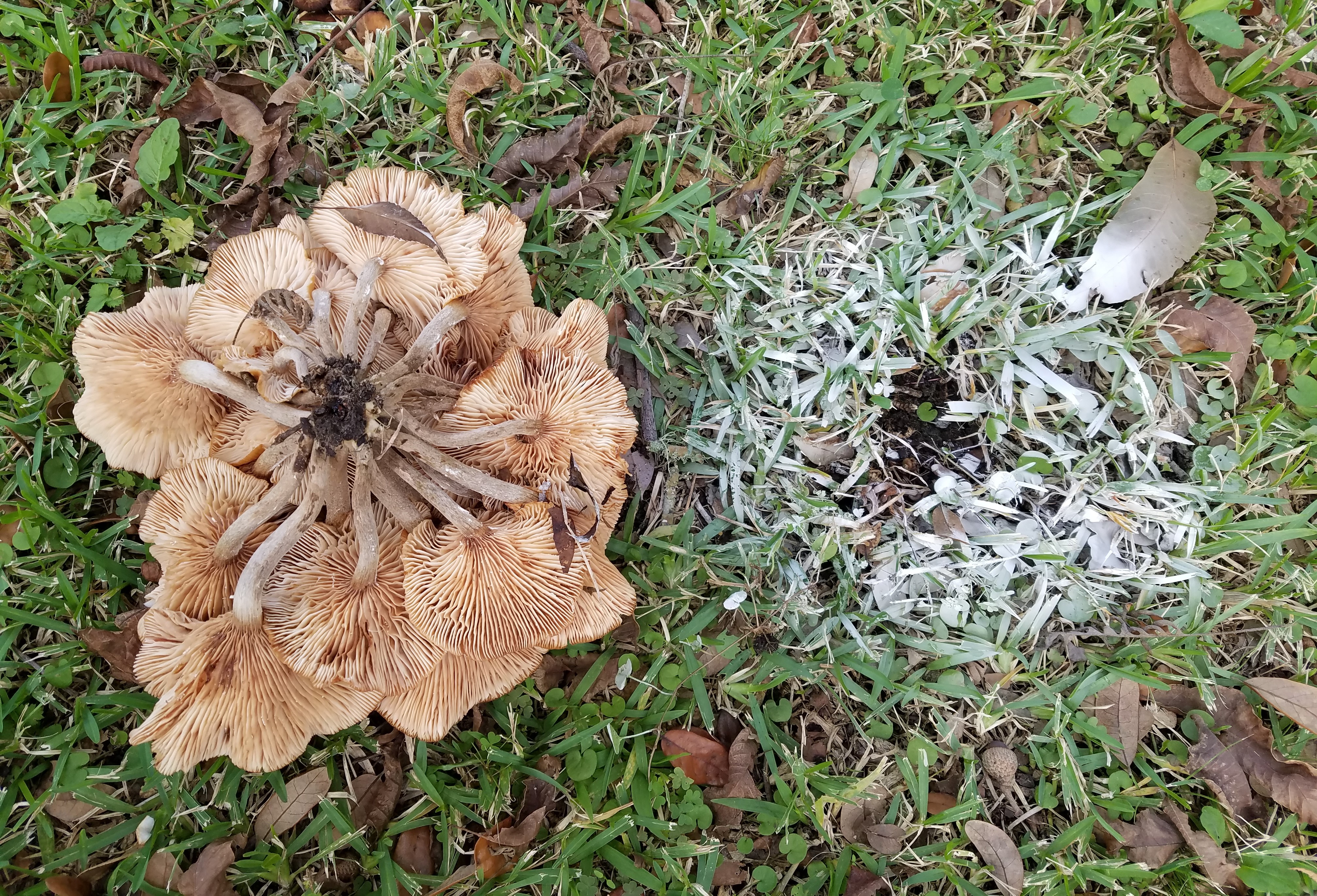 Underside of a mature Desarmillaria tabescens mushroom, shown next to white spores that it produced. (Photo by M.H. Ferguson)