Here are Some Reasons that Vegetables Produce Flowers but Not Fruit

Gardeners sometimes find that their plants are flowering but not producing fruit (cucumbers, tomatoes, beans, etc.). There's a variety of reasons that this can occur.

Most squash, cucumber, and melon plants (all of which are “cucurbits”) produce separate male and female flowers on the same plant.

On many typical cucurbit plants, though, the first flowers that appear are generally male, so they don’t produce fruit. The first female flowers appear later. Of course, it’s still necessary to have male flowers at that time to provide pollen.

Female squash, cucumber, and melon flowers can be identified by the presence of a swollen area under the petals that looks like a miniature fruit. This is the ovary of the flower. Male flowers, on the other hand, have a narrow stem.

If both female and male flowers are present but no fruits form, a lack of pollination is one possibility. If there are few bees in the area, or if they’re just not active, this could be part of the problem.

If you’re using insecticides, wait until late afternoon or early evening - when bees are no longer active - to apply them. To encourage more bee activity, you can also plant flowering plants like zinnias nearby.

Weather can affect bee activity. Honeybees typically do not fly while it’s raining, so prolonged rainy weather can result in reduced fruit production.

If the bees just aren’t cutting it, one option is to hand-pollinate cucurbit plants. You can either touch the pollen-bearing anther of the male flower directly to the stigma of the female flower, or you can use a paintbrush to transfer the pollen. It’s a good idea to do this in the morning.

Besides a lack of pollen transfer from male to female flowers, there are other reasons that vegetables sometimes produce flowers but not fruit.

Corn is wind pollinated. To improve pollination, it should be planted in several rows next to each other rather than just in a single row. 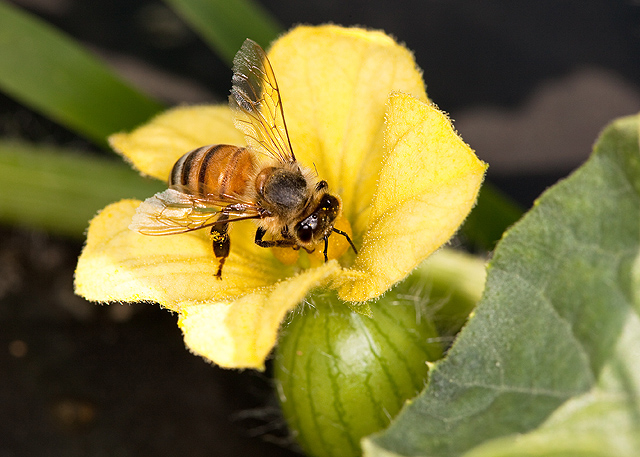 In watermelon and other cucurbits, pollen must be transferred from male flowers to female flowers for pollination to occur. The ovary of the female watermelon flower (shown here) looks like a miniature watermelon. (Photo by S. Ausmus, USDA Agricultural Research Service)