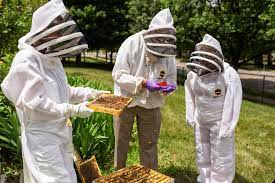 This version of BHB looks at bees in the news around the world from bee behavior to varroa control to environmental concerns to bee nutrition.

A recent article, 5.21.22, in Live Science titled “Do bees really die if they sting you?” by Joe Phelan answers the question posed in the title. The short answer is “it depends.” Beekeepers already know the answer is “yes” with respect to honeybees. Honeybees have barbed stingers which cause the bees to become disemboweled and die later if they penetrate human skin. If a honeybee stings a spider or another insect, then it tends to survive.

However, there are bees and wasps with smooth stingers that can continue to sting repeatedly.

This article also reports there are over five hundred species of “stingless” bees, mostly in the tropics. Rather than sting, they use their mandibles, or jaws, to bite their target.

The Guardian, a British newspaper, reported on June 6, 2022, that over six hundred hives were destroyed near Newcastle, New South Wales(NSW), Australia, because of a discovery of varroa mites(VM). The eradication effort is to prevent the spread of this pest to the entire Australian apiary industry. Efforts to monitor for the spread will continue in the affected areas and beyond, and if more hives are infested with VM, then those hives will be euthanized.

Not only will the beekeeping profession suffer economic losses in NSW, but the almond crop may fail due to the lack of pollination services.

“Everyone got so into the idea of urban beekeeping that now there might be too many urban bees” by Adele Peters, Fast Company, 1.28.22, is story about how urban beekeeping may be unsustainable. This report reveals there are too many beehives in European cities and not enough plants to support honeybees. There is concern that European honeybees may displace other native pollinators. The article concluded that limits on beehives may relieve this problem as well as adding pollinator friendly greenspace.

A press release, 6.27.22, from Indiana University reported, “Microbe protects honey bees from poor nutrition, a significant cause of colony loss.” Professor Irene Newton and her researchers learned that “a specific microbe -- Bombella apis -- is the only larva-associated bacterium that can thrive in royal jelly. They also found that B. apis makes royal jelly more nutritious by significantly increasing its amino acid content, which helps developing bees build resilience against nutritional stress.

‘We have identified a nutritional symbiont of honey bees -- a microbe that can help bolster the bees against nutrient scarcity and stress,’ Newton said. ‘When we limited bee nutrition during development, we saw a drop in mass for the bees; bees were much smaller than their control counterparts.

When B. apis was added to these same bees, although they had poor nutrition, they reached the same mass as control bees given full nutrition. The microbe was able to make up for the poor diet. This suggests that B. apis could be added to colonies as a probiotic to protect from nutritional stress.’

The results suggest that B. apis may have potential as a key supplement in future beekeepers' efforts to counteract the negative influence of poor nutrition on honey bee health. B. apis can survive for over 24 hours in sugar water, so beekeepers who are already supplementing their colonies could potentially integrate a B. apis probiotic into their bees' diets.”

If you want to contact “Beehive Buzz,” please send your questions and pictures to Keith Hawkins, Area Horticulture Agent (AHA), 318.264.2448 or khawkins@agcenter.lsu.edu . Also, you can be on the “beemail” email list by emailing your request to the address above.

“Mention of trade names or commercial products and services in this article is for informational purposes only and does not constitute endorsement by Louisiana State University AgCenter.”