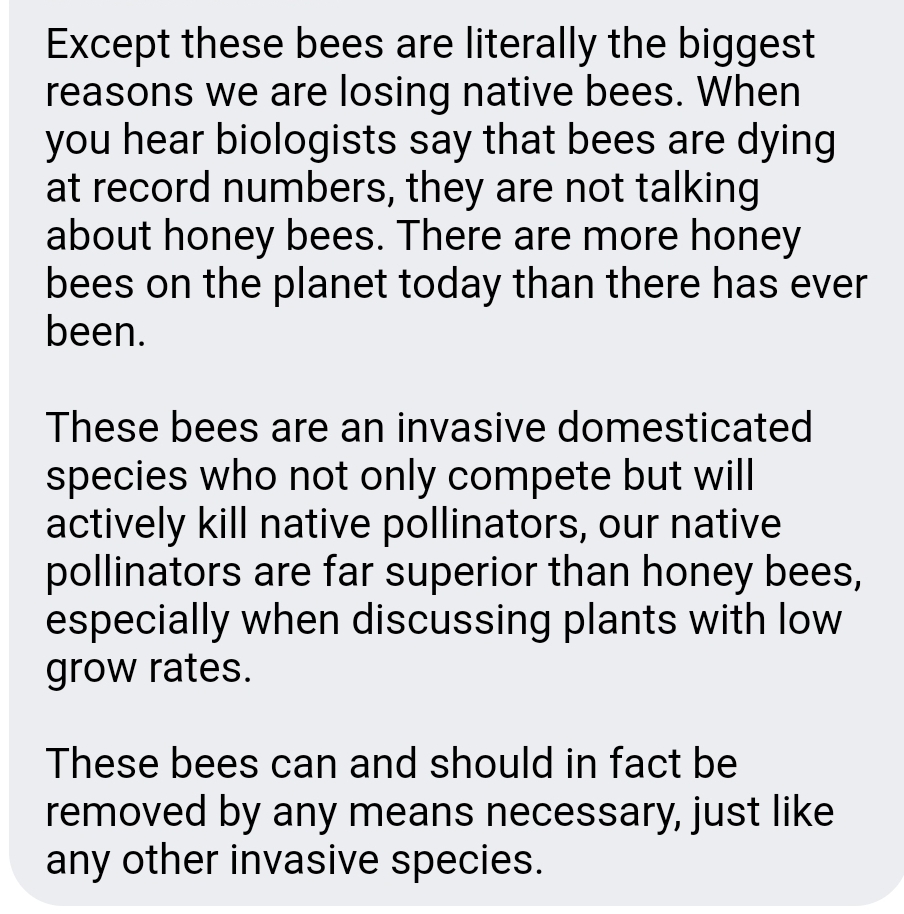 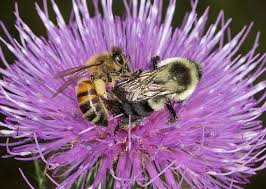 Raziel sent an email with this comment, “Someone commented this on [Facebook] and I'm curious about the level of truth in it.” This email also had a screenshot of the narrative in question.

The writer in the screenshot believes that honeybees are harming the native bees. This writer has made some accurate statements and some false assumptions.

“There are more honey bees on the planet today than there has ever been”. AHA is not sure about the planet. However, in southwest Louisiana, AHA has received over 80 complaints in the past year regarding unwanted honeybee infestations in homes and other structures. Beekeepers and Extension Agents regularly receive calls to remove bee so the honeybees seem to be doing well locally, and, yes, they can be invasive.

Both honeybees and silkworms are domesticated insects. Also, horses, dogs, cattle, and other animals have become domesticated through human history.

This comment seems to be very extreme in its assertion, “[honeybees] will actively kill native pollinators…” Dylan Voeller and James Nieh are instructors at University of California at San Diego, and wrote, “Honeybees generally attack only to defend their colony, but will also attack if they are seriously disturbed outside the nest.” These university instructors make this comment about Africanized, or “killer” honeybees, “The rapid defense response of Africanized honeybees is most likely a result of adaptation to life in tropical climates, where there is a higher rate of predator attacks on colonies.”

Honeybees will rob other bees for pollen. In the image below, a European honeybee is robbing a native eastern bumblebee. Another similar image online shows a honeybee robbing pollen from a thistle long-horned bee.

After searching various sources, particularly scientific literature, no document presented evidence of honeybees “actively” killing native bees. However, some literature found that honeybees, in some instances, will displace native bees. In other instances, both honeybees and native bees will co-habituate and forage together.

Mark Brown and Robert Paxton, researchers at the University of London, make this observation, “Habitat loss is the major threat to bee diversity, whilst invasive species, emerging diseases, pesticide use, and climate change also have the potential to impact bee populations.” Other factors are contributing to the negative impacts on native bees besides honeybees.

“Our native pollinators are far superior to honey bees…” This point seems to be correct. An entomologist at Cornell University, Professor Bryan Danforth says, “They are two to three times better pollinators than honeybees…”

Also, native bees are more efficient at pollinating native plants, while honeybees are better with crops and invasive, non-native weeds.

The writer of statement seems indifferent to the high value that society places on honey bees. The American Bee Federation (ABF) reports, “Honey bees contribute nearly $20 billion to the value of U.S. crop production. This contribution, made by managed honey bees, comes in the form of increased yields and superior quality crops for growers and American consumers. A healthy beekeeping industry is invaluable to a healthy U.S. agricultural economy.”

Forbes magazine published in 2019, “Honey is more than just a by-product of pollination. This sweet nectar serves as an economic driver. Used commercially for food, skin creams, anti-aging lotions, and medical wound dressings, over 160 million pounds of honey are produced each year in the U.S. alone. In 2013, the honey crop was valued at over $300 million (U.S.). D

Beeswax and pollen are also produced by these insects and are used in lip balm and other cosmetic products. Propolis, a resinous sealant created by bees to construct their hives, serves as a varnish for stringed musical instruments, and in some countries serves as toothpaste or mouthwash.”

Finally, the removal of honeybees “by any means possible” strongly suggests using insecticides aggressively and irresponsibly. Such a radical approach would entail environmental risks to beneficial, native insects because of the risk of off-target application of insecticides.

If you want to contact Beehive Buzz, please send your questions and pictures to Keith Hawkins, Area Horticulture Agent (AHA), 337-463-7006 or khawkins@agcenter.lsu.edu. Also, you can be on the “beemail” email list by emailing your request to the address above.