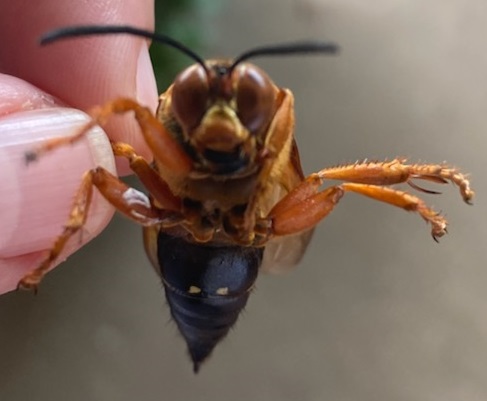 During the month of October 2020, news agencies reported the eradication of a single nest of Asian giant hornets (AGH) or, as the Japanese call them, “murder hornets”. The Department of Agriculture of Washington state also recovered two live queens from this dangerous mission.

The Extension service of Washington State University described this new pest, “These hornets are native to temperate and tropical Eastern Asia and are 1.5-2″ long (world’s largest hornet) with black and dull yellow/orange striped abdomen. AGH creates nests in the ground taking advantage of existing structures such as hollow trees or rodent tunnels. They aggressively attack honeybees and a small group of them can destroy an entire colony, and as such are a serious concern for beehives and native pollinators. AGH can be confused with other species in the same genus so positive identification is needed to confirm their presence.

AGH is also a potential a human health concern as their venom is very toxic and they will attack humans if threatened. If you suspect you see AGH or a nest do not approach and contact [state department of agriculture or extension service].”

Because of this recent report, AHA recalled several local people wondering if they had seen the “murder hornet”. One gentleman insisted he had seen an AGH, and AHA suspects that this person had seen an eastern cicada killer wasp or, more simply, the cicada killer.

Bentley Fitzpatrick, an Extension Agent with the LSU AgCenter, writes about the cicada killer, “The eastern cicada killer wasp, Sphecius speciosus, is a large, solitary digger wasp that typically appears in Louisiana mid to late July. It is a beneficial insect that is a predator of cicadas, which it stings and stuns to store in her burrow to feed her larvae.”

The season to see any cicada killer wasps is past. This species of wasp emerges during the summer months of July and August to attack the arrival of cicadas and is useful insect that parasitizes eastern cicadas. Unless provoked, the cicada killer is harmless.

The take-home message for next summer is to avoid panic when observing a cicada killer. If there is doubt about the identity of this insect, bring in a specimen to the nearest office of the LSU AgCenter for a positive ID.

If you want to contact Beehive Buzz, please send your questions and pictures to Keith Hawkins, Area Horticulture Agent (AHA), 337-463-7006 or khawkins@agcenter.lsu.edu. Also, you can be on the “beemail” email list by emailing your request to the address above.