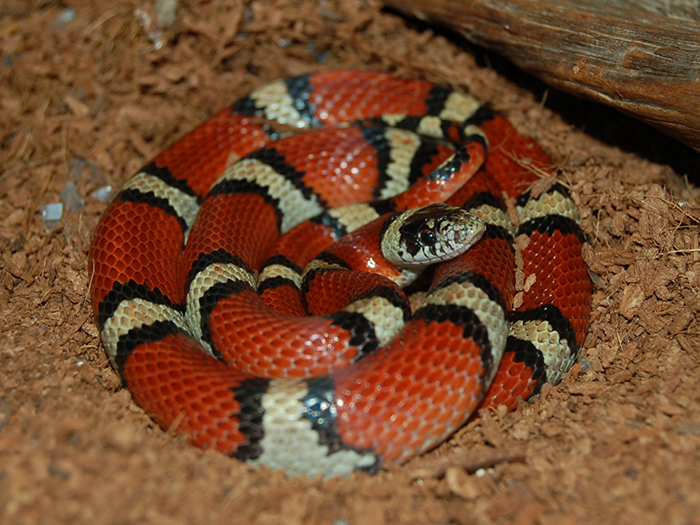 Michelle called the AgCenter and described a “red and orange” snake in her daughter’s bedroom. She wanted to determine if it is venomous or not. AHA and Michelle talked about the difference between a venomous coral snake, and a harmless milk snake. Michelle decided to release this snake outdoors because she knows that harmless snakes will control rodents and appreciates the benefit of non-venomous snakes. AHA went on to try to identify this snake based on color description.

Several snakes fit the description above including the common water snake, corn snake or milk snake, and all these snakes are non-venomous and harmless. Again, these snakes control rodents and other pests in the landscape. 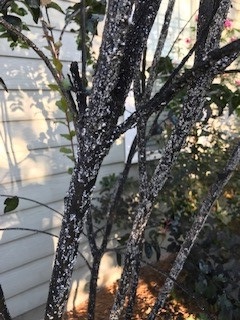 Sara from LeCompte sent an email on behalf of a neighbor, “My neighbor’s many, many mature crepe Myrtle’s are affected by aphids ([I] hope they don’t spread across neighborhood). Robbie Hutchins, Area Forestry Agent, suggested spraying with Dawn™. [Do you have] any other suggestions/tips?”

In general, Dawn™ or other soap mixed with water has a smothering affect. However, Sara, in a later email, wrote, “My neighbor’s trees did not seem to respond to the Dawn™, as far as we can tell. And I pointed out that those little white egg sacks are on all her many trees, not just the three she sees by her porch. And more disturbing (for me) is I’ve noticed that my next door neighbor has them on the crepe myrtles by his house, but they haven’t yet crossed his driveway to his trees bordering my side, but I’m bracing for the damage here, too. And I have no idea how you spray stuff all the way up into a tall tree 🙁”

AHA suspected that Sara has crape myrtle bark scale (CMBS), a pest first observed in Texas around 2004. In her weekly column from August of 2020, Get It Growing: Combatting Crape Myrtle Bark Scale, Dr. Heather Kirk-Ballard outlines some control measures:

Finally, lady beetles will attack this scale. The cactus lady beetle, twice-stabbed lady beetle, and the bigeminate lady beetle are the most common natural enemies seen in infested trees in Louisiana. Go to Dr. Kirk-Ballard’s column to learn more about CMBS. 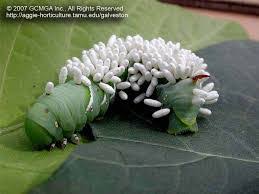 If you are a gardener and if you are an LSU football fan, then this story will be interesting. LSU AgCenter assistant professor Nathan Lord and colleagues have named a new species of wasp after Heisman winner Joe Burrow! The official wasp's name is Orientocardiochiles joeburrowi.

This wasp was found in Malaysia and “Named in honor of Joseph Lee Burrow, the world-class college football quarterback for the LSU Tigers and the 2019 Heisman Trophy winner” according to the Zoo Keys website. The biology of this wasp is unknown.

However, its Louisiana relative, the braconid wasp, attacks garden pests like the tomato hornworm. This wasp is tiny and harmless to people. The Georgia Extension website also reports, “There is a braconid wasp, Cotesia congregates, that specifically looks for tomato hornworms. This small wasp has clear wings and as an adult they are nectar feeders. To persuade the wasps to stay in your garden you will need to have flowers. The small braconid wasps are attracted to small flowers like yarrow and small asters.”