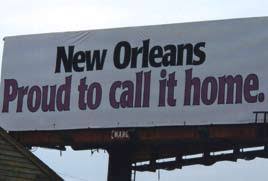 New Orleans is known as “The Big Easy” and often mentioned as a city within two cities. A selected few may live quite easy, but many residents find it not easy at all. As Charles Dickens, the famous novelist, writes in “A Tales of Two Cities”, “It is the best of times and the worst of times” but not for anyone in London or Paris, but for those in New Orleans. A light was shown on the poverty, and lack of concern for the poor. Hurricane Katrina left the country and the world with an unfavorable view of the city. Despite the poverty-stricken areas of the city, the people and the culture were recognized as the Diamonds and Pearls of its makeup. After this catastrophe, affordable housing for poor families was omitted from the rebounding city, leaving families with nowhere to go. Many families who lived in subsidized housing were transported to other parts of the country; families were separated. When they finally returned to New Orleans, the city did not provide for them. Homelessness grew larger than anyone could have ever imagined. The children who were separated from their parents experienced trauma and that exacerbated conditions. There was a population of impoverished youth who returned to the city homeless. 1.1 million children live with a parent, mom or less frequently a dad who is homeless.