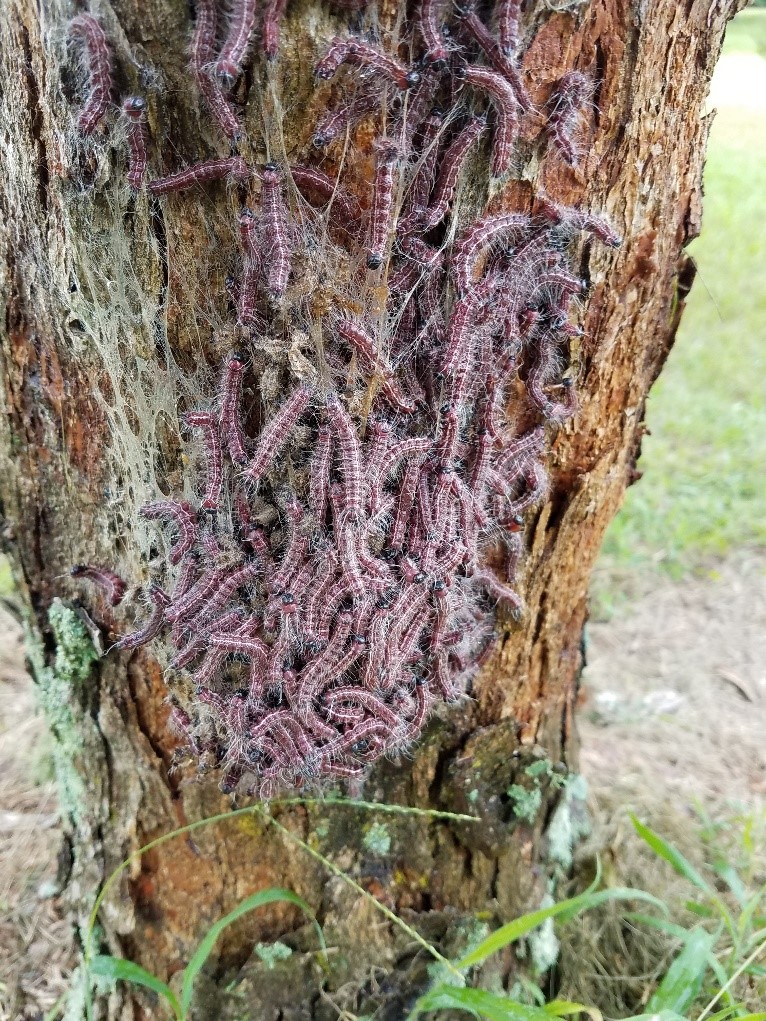 Loretta has been enduring the infestation of the walnut caterpillars for several years, and is prepared for another year, “I [soil] drenched [an insecticide] about 3 weeks ago & wondered if I could use the same mix to spray the Tree trunk?

Last year they had so many [walnut caterpillars] I had to burn them! I would check the tree, brush them off, burn them & a couple of hours later I could do the same thing again. They formed clumps on the trunk! I have never seen anything like it, nor do I want to do that again this year.

It is going on 4 years since we have had pecans! We have been here since 1995 & always had lots of pecans. We were able to give some away! I want my pecans back. 😢”

AHA responded to Loretta, “I doubt spraying the trunk will help because the insecticide has to be ingested to be effective so using it as a barrier would be a wasted effort.

A product called Tanglefoot is wrapped around a tree, and the caterpillars stick to it until there are so many worms that the other worms will crawl over the dead bodies. It costs $10 to $20 online.

Another product called Tred-Not Slippery Caterpillar Tape is also attached to the tree trunk. It is the opposite of Tanglefoot because it is so slick that the worms cannot crawl up the tree. It costs about $5 online.

Also, these outbreaks last 3 or 4 years so let us hope we are on the downhill side of this infestation.”

A fig branch with a tunnel bored by the three-lined fig borer. Photo: Vicky Smith. 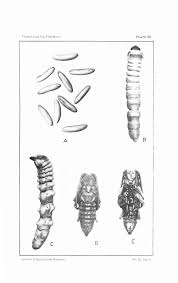 Vicky wrote about her fig trees in an email, “I have 2 fig trees fairly close to each other—about 6 feet apart. One brown fig; one purple. Suddenly, the brown fig is dying. More than half of it is dead. I broke a dead branch and found something inside. Do you know what it is? I also noticed that the other tree has a dead section also. They are in full sun and have always been healthy. Any idea what is going on?”

AHA found the culprit in an AgCenter publication, Figs for Commercial and Home Production in Louisiana, “The three-lined fig borer, Neoptychodes trilincatus, sometimes causes severe damage. The grub bores into the tree and feeds near the surface for several months. It may then bore deep into the wood. The adult is a long narrow beetle with three scalloped white stripes that extend almost the length of its body. Borers usually attack only weak or damaged trees. They are best controlled by maintaining vigorous trees and by using good pruning practices.” Soil testing and then following recommendations for fertilizing would help the vigor of fig trees.

The image to the right is the life cycle of the three-lined fig borer. Image: USDA

Mike asks, “What is this I see about Murder Hornets?”

On the first weekend of May 2020, the New York Times published an article, “ ’ Murder Hornets’ in the U.S.: The Rush to Stop the Asian Giant Hornet” in which an official in Washington state Department of Agriculture confirmed the presence of the Asian giant hornet (AGH) in the United States.

The Extension service of Washington State University described this new pest, “These hornets are native to temperate and tropical Eastern Asia and are 1.5-2″ long (world’s largest hornet) with black and dull yellow/orange striped abdomen. AGH creates nests in the ground taking advantage of existing structures such as hollow trees or rodent tunnels. They aggressively attack honeybees and a small group of them can destroy an entire colony, and as such are a serious concern for beehives and native pollinators. AGH can be confused with other species in the same genus so positive identification is needed to confirm their presence.

AGH is also a potential a human health concern as their venom is very toxic and they will attack humans if threatened. If you suspect you see AGH or a nest do not approach and contact [state department of agriculture or extension service].

Coordination with US and Canadian agencies is underway and more information on this insect will come as it becomes available.”