Margie Yates Jenkins has recently been selected into the 2018 Louisiana Agriculture Hall of Distinction. Jenkins is a plant breeder and nursery owner from Amite, LA. At 96 years old, she is still active in the horticulture industry- growing new plants and educating the public. The Margie Jenkins Lecture Series and Industry Open House is on April 5th. In honor of this annual event we wanted to look back on her life and dedication to horticulture. Below is an article from 2008 on her journey and contributions to our industry.

Margie Yates Jenkins has always enjoyed “growing things.” Her mother would leave a spot in the vegetable garden so the young Margie could plant a few seeds herself. Margie felt such pride when she could pick a few beans of her own to put in the family's bucket. Margie’s husband, Bryant Jenkins, operated a dairy farm and grew watermelons for most of his life. After her four children (Freddie, Margie Ann, Timothy, Jeffery and Mark) entered school, she and Bryant started a small growing operation in the early 1960s and continued it for next 15 years.

While attending Louisiana State University, Margie Ann (Ms. Margie’s daughter) heard about a summer course taught by Dr. Neil Odenwald, LSU professor emeritus and book author. The course was aimed at extension workers, county agents and others who were interested in design and design theory. Margie Ann persuaded her mother to take the course, which completely changed Margie's thinking about plants. "When I came back, that was my goal," she said, "To grow things that were unusual. Of course, a lot of the old plants, too, I wanted to grow -- and of course, natives."

In 1977 Ms. Margie at the age of 56 was ready to take on the challenge of reopening the nursery to grow different types of plants. She hired six workers with the dairy paying their salaries, so she did not have to borrow any money to start the nursery. After talking with many of the big wholesalers around Folsom, Margie found that none of them were catering to customers in New Orleans or to the small contractor who was supplying the New Orleans landscape market. She decided that this was her niche: "the guys in the pickup trucks."

Azalea production in the southeastern United States in the 70s had focused on the Southern Indian, Kurume and a couple of Glenn Dale varieties of azaleas. As Ms. Margie was active in national azalea meetings, she knew of the hardier varieties grown as far north as New York. Always a seeker of new and interesting plants, she bought rooted cuttings of several varieties of Robin Hill azaleas and other hybrid groups and put them in production at her nursery. Now in any process of discovery, there is a wild card. For Ms. Margie, it was the cold blast that the area received in the winter of 1983.

Southern azaleas suffered tremendous damage during the winter of ’83, but the hardiness of these "new" varieties was demonstrated. This cold hardiness and the off-season blooming habit that Ms. Margie later observed convinced her to propagate and expand these new azaleas. Names like Arabesk, Watchet, Janet Rhea, Hardy Gardenia that were on a Jenkins Nursery liner receipt in 1981 are now stock-in-trade items of Southern nurseries.

When the Azalea Society of America conferred its Distinguished Service Award on Margie Jenkins in 2007, the tribute acknowledged “the increased use of Robin Hill azalea cultivars and other azalea hybrid groups in the southeastern United States can be attributed to (Ms. Margie’s) interest in growing and distributing these plants prior to other wholesale producers.”

Today she still watches her crops with the eye for discovery that had her notice a sport of Watchet. She isolated and propagated this white sport and named it Freddy in on honor of her son. Freddy is on the cover of the The Azalean Winter 2006 issue. 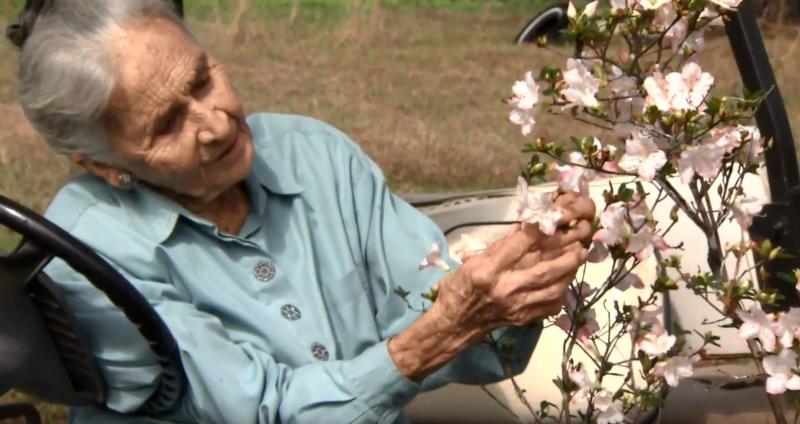 Spring is officially here! Spring is beautiful, but also brings many common landscape pests. Get out all of your tools and tactics to fight off any unwanted creatures. 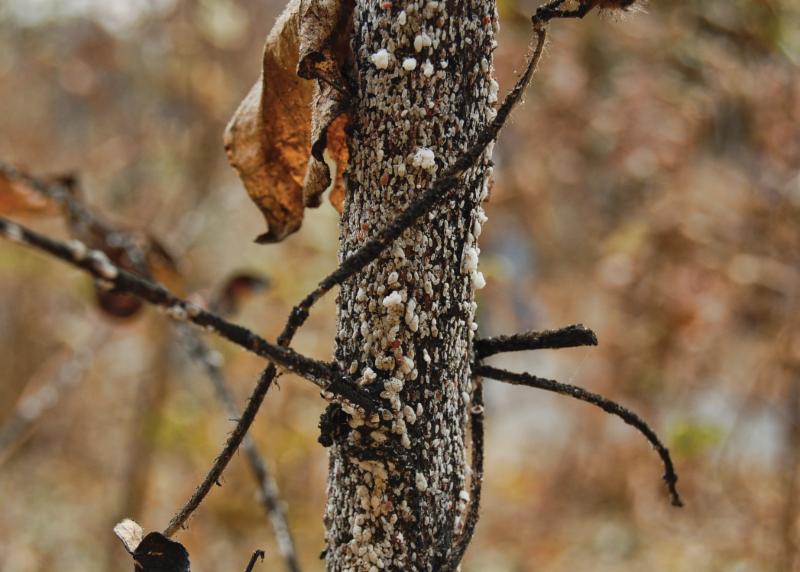 As this exotic bark scale continues to spread in Louisiana and surrounding southeastern states, LSU AgCenter researchers and Master Gardener volunteers have been monitoring its populations at several locations across the state. Double-sided sticky tapes are used to collect information on the crawler population in the spring, which is the best indicator for timing early treatment applications. Based on the data collected over the past three years, CMBS crawlers usually peak between late April and early May in Louisiana, which had been concurrent with the time period of crapemyrtle bud breaks.

Around mid-March this year, we observed bud break on several varieties of crapemyrtles, and have initiated crawler monitoring in Shreveport, Houma, and New Orleans. We won’t be able to update on what we find until the next Ornamental Update. However, because of the close relationship between bud break and crawler activities, we would like to alert landscape maintenance professionals that we are expecting an early emergence of crawlers this year. For those that are managing infested trees, putting out some double-sided removable sticky tapes on infested branches and check for crawlers after three to five days may help locate the early emergence.

With the cold weather events we had this past winter, it is possible that numbers of scales successfully overwintered are lower than previous years. However, it is still too early to predict a lower peak of crawler populations because overwinter beneficials such as ladybeetles and lacewings could be affected by extreme temperatures as well.

It is important to learn basic biology and understand why it is critical to control crawler population, and this article illustrates the life cycle of this scale and also summarizes the results of several landscape chemical trials were conducted over the past years:

Take-all root rot is caused by the soilborne fungus Gaeumannomyces graminis var. graminis (Ggg), which frequently is found in association with turfgrass roots without causing significant disease. As the name implies, this disease of the roots can be quite destructive. Aboveground symptoms generally are not visible until the root system has already been severely compromised. The appearance of these symptoms generally coincides with periods of several abiotic stresses, especially heat and drought stress. The initial symptoms of take-all root rot generally are visible as an overall yellowing, thinning or drought-stressed appearance of the turf (Figure 1). Diseased roots are often short, darkcolored and somewhat brittle (Figure 2). The overall density of the root system is also greatly reduced. Affected stolons can be easily pulled out from the lawns. Careful examination of stolons and the base of the leaf sheaths with a good hand lens may reveal the presence of the black strands of fungal mycelium of Ggg on their surfaces (Figure 3). If left untreated, large, irregularly-shaped areas of turf may die (Figure 4). Symptoms caused by the take-all disease easily can be confused with injury caused by chinch bugs. The management of take-all root rot relies primarily on the use of cultural practices to relieve stresses that trigger the disease and to modify the environment to make it less conducive for the pathogen. These stresses include soil compaction and poor drainage, drought, Gaeumannomyces graminis var. graminis Figure 1. Initial yellowing of turf due to take-all root rot. Figure 2. Root systems of turfgrass affected with take-all root rot. Figure 3. Presence of black strands of fungal mycelium of Ggg on affected stolons. improper mowing height, excessive thatch build up and the overuse of herbicides... Click here to read more

Initial yellowing of turf due to take-all root rot. 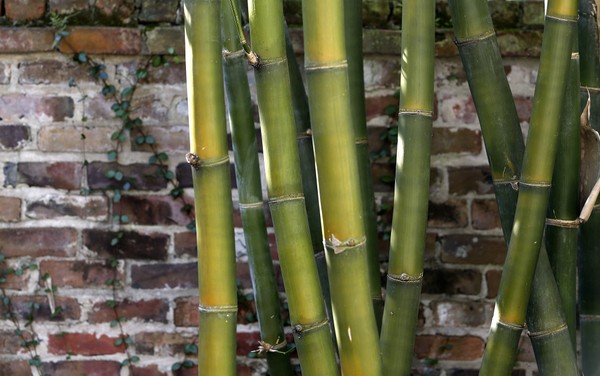 Damage to bamboos is widespread, and most bamboos are showing some degree of browning. In south Louisiana, observation indicates that the damage is mostly to the foliage, and the canes (called “culms”) are still alive. In north Louisiana, colder temperatures were more damaging. It is too early to decide if bamboo needs to be cut back. If the canes are still alive, the bamboo will drop the damaged leaves and send out fresh new leaves to replace them. The bamboo should look fine again by midsummer. Any stalks that drop their leaves and are still bare by midsummer are dead, and should be pruned off at ground level.

We are heading into a highly diseased time of year, so now is the time to refresh your sprayer knowledge! 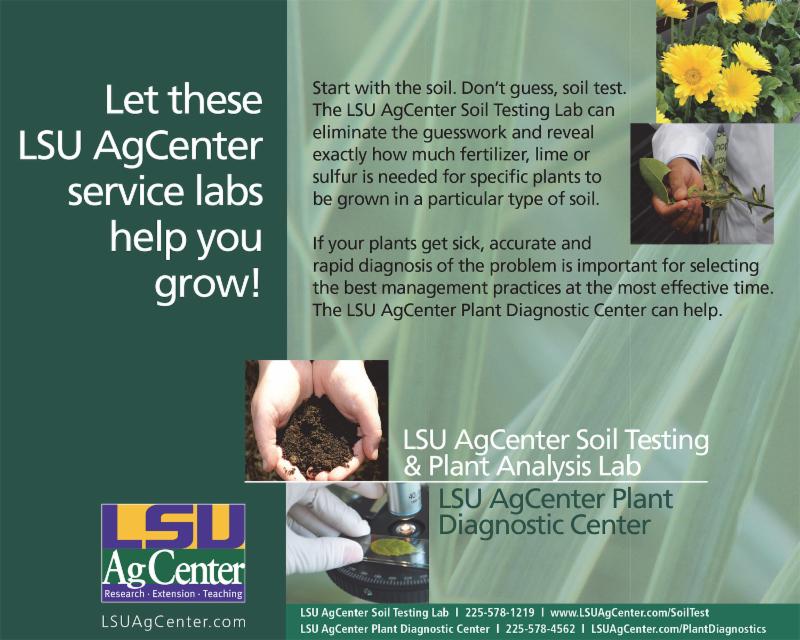