If you're a member of the industry, please complete this survey! Click here to take the survey. 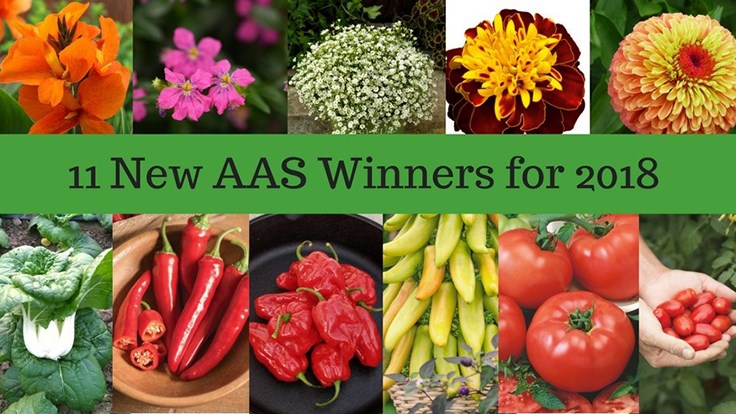 Previously announced 2018 AAS Winners from July are also featured on the AAS website and are readily available for purchase:

What is "New" Horticulture

The beginning of a new year is a great time to survey the state of horticulture and see where our industry is headed.

Current trends in horticulture include sustainability and organic gardening; increased sales of vegetable plants, fruit trees and bushes and pollinator-friendly plants; and a movement away from synthetic pesticides. There is also an increase in farmers markets and an emphasis on buying local, fresh produce; efforts to support small businesses, such as Small Business Saturday after Black Friday; and the marketing of branded plants by popular companies, including Southern Living and HGTV. And social media has become an extremely popular way of finding tips and inspiration on sites like Facebook, Twitter, Instagram, SnapChat, Pinterest and others.

The state of retail

There seems to be a few mail-order nurseries in many states doing well by offering plants that are harder to find at regular retail. There are fewer independent garden centers, but the ones we have in Louisiana are larger and have noticed significant sales increases in recent years. In Louisiana, the number of wholesale nurseries has declined 25 to 35 percent in the past 10 years, but production acreage has increased 15 percent.

Gardening as a hobby

The number of Americans participating in gardening over the past 10 years has varied from a high of 119.8 million in the fall of 2015 to a low of 99.4 million in spring of 2012. Statistics from 2017 show 117 million actively engaged in home gardening and landscape activities.

What goes on in your state

Growers and nursery and landscape company owners, managers and employees need to be active in their state’s nursery and landscape associations. In Louisiana, the Louisiana Nursery and Landscape Association is the state association. Regional associations are active in central Louisiana, Baton Rouge, southeast Louisiana and the New Orleans metro area. We also have the Louisiana State Horticulture Society. Many states in the South also have active groups for hobbyists, such as camellia societies, local rose clubs, daylily groups, iris societies, herb societies and more. Horticulture professionals participate in many of these groups, too. We need better visibility and participation from our industry in state and regional garden shows. As universities provide fewer open houses, educational events and field days, it is important for industry businesses and members to provide leadership for alternative activities like open houses at nurseries, grower tours, supper clubs and more.

Our Products and Services

The ornamental, landscape and nursery industry could gain from touting the human benefits of our products and services. Landscaping and gardening are shown to improve emotional health, help seniors’ well-being, increase compassion, decrease worry and anxiety, aid in building stronger communities, mitigate environmental issues and increase home values. At the same time, we need to promote horticulture as being a necessity and not a luxury.

A generally mild November quickly turned into a wintry early December across southeast Louisiana with a rare snow day. While the forecast generally called for snow accumulations of only one inch, Winter Storm Benji actually dropped up to six inches in some places. The Hammond Research Station was one of those locations where the landscape was transformed into a winter wonderland. Fall-blooming azaleas came to an abrupt end, but most of the sasanquas kept on blooming. Earlier freezes and frosts had already burned back most of the root-hardy tropicals and remaining warm-season plants. There wasn’t quite enough time to put out frost cloth on the cool season annuals, but only the ones newly-planted ones seemed to suffer some damage.

Cool season annuals that were planted around November 1st or earlier appeared undamaged since they were well established in the landscape. In general, petunias and snapdragons typically exhibit more damage from these early season winter weather events. Violas, pansies, dianthus, dusty miller, ornamental cabbage and kale usually come through like champs.

The olive orchard is always one of the most interesting areas to observe at the station during winter weather. Although olives are adapted to a Mediterranean climate, they have proven quite adaptable to south Louisiana’s tough growing conditions. During this snow event, the olive trees simply took on a weeping willow appearance, with all branches just bending over with the heavy, wet snow. Amazingly, once the snow melted, the branches popped right back up without breaking! Olives, with their thin bark, are quite flexible. Temperatures were not actually cold enough to cause any bark splitting or large-scale defoliation, although some leaf and branch tips had a little frost-type burn. Mature pine trees at the station suffered much worse, with many branches snapping and damaging some plants underneath them.

Overall, most plants at the station fared pretty well after the heavy Louisiana snow! 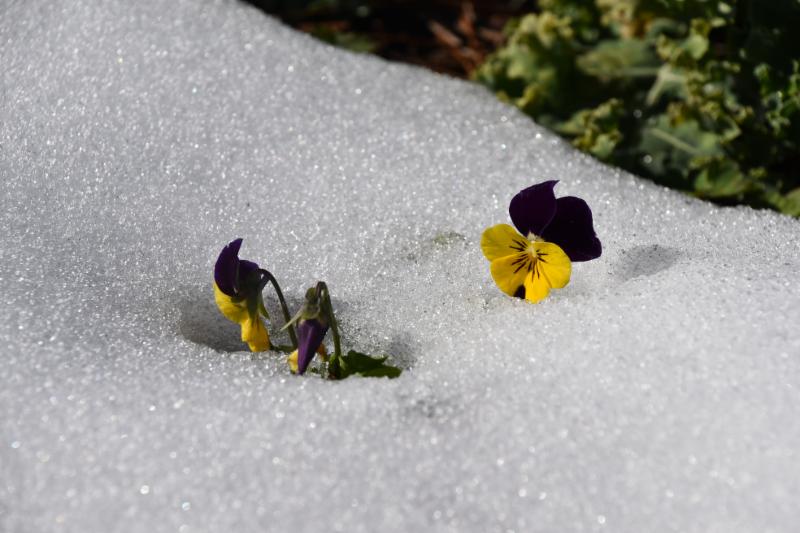 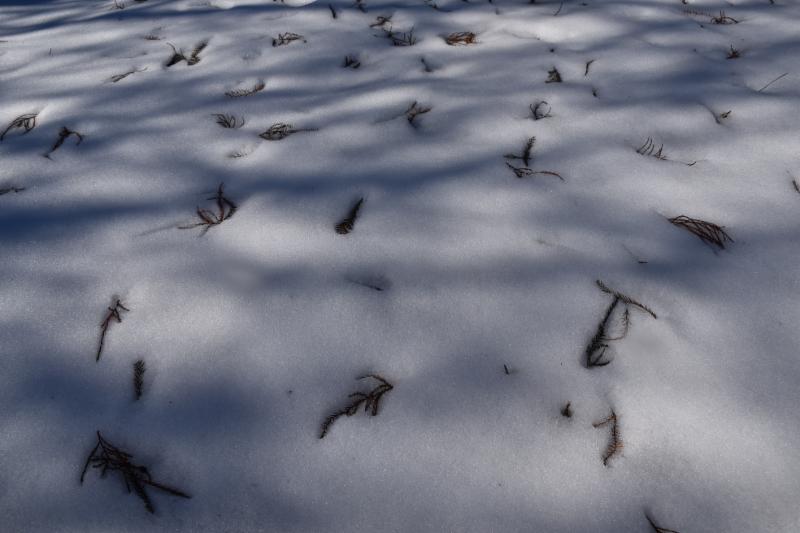 Snow fell up to 6 inches on the station 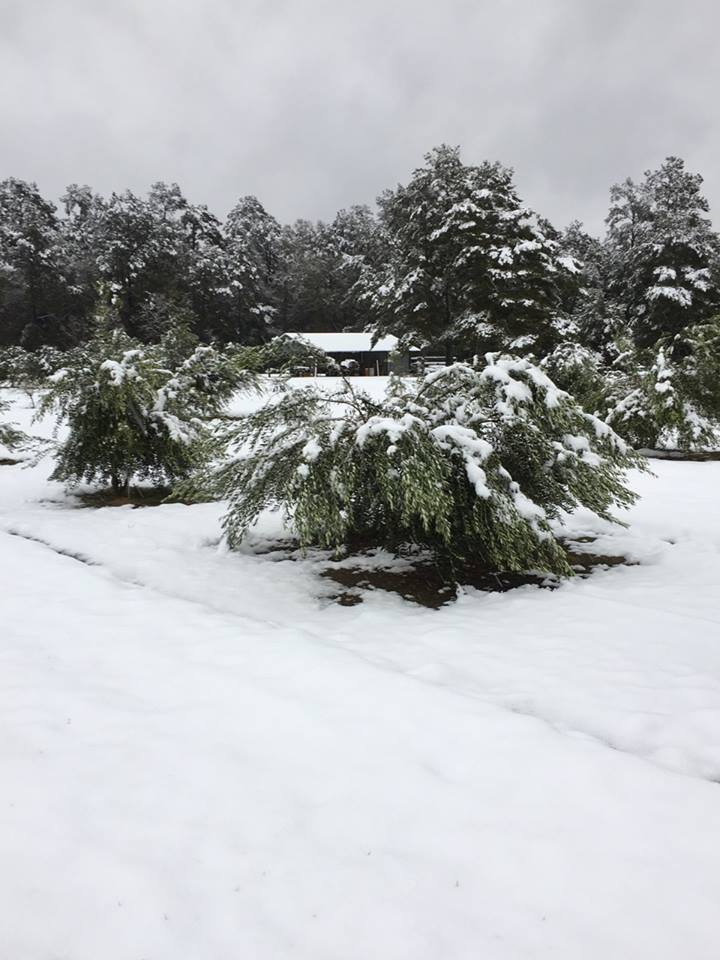 Olives bending over from the weight of the snow on Friday, Dec 8

A few days later the olives have no visible cold damage.

Our greenhouse buckled under the weight of snow

Inside of the collapsed greenhouse

Gardening After a Freeze

Temperatures are now well above freezing. If any potted plants were brought inside to protect them from the cold, they may now be brought back outdoors. Of course, if our area happens to get another freeze, you will need to bring these plants back inside. Potted plants do not mind being brought in and out as the weather dictates.

Before pruning any freeze-damaged plants, make a distinction between herbaceous perennials and woody tropicals. Be sure to wait at least a week or more after a freeze to begin pruning herbaceous or non-woody tropical, such as cannas, elephant ears, birds-of-paradise, begonias, gingers or philodendrons. If these plants have dead foliage, you may prune to the living area. Keep in mind this sort of pruning is to simply clean up the look of the garden.

If you decide not to prune dead foliage after a freeze, then be sure to add this task to your spring cleanup list. These herbaceous perennials should have their dead parts removed after danger of the last freeze or before they begin to make substantial new growth.

It is generally a good idea to delay pruning woody tropical plants, such as hibiscus, tibouchina, angel trumpet, croton, ixora or schefflera, until new growth begins to emerge in spring... Click here to read more.

Using Fallen Leaves in the Garden

This poem comes to my mind every year around this time as the leaves are beginning change colors and be shed for the year. For a full year, these trees have worked diligently, pulling nutrients from deep in the soil to develop the current year’s foliage. But all too often, gardeners and homeowners will rake their lawns, only to bag up the leaves and put them by the side of the road.

These bags of brown gold are then put into to a landfill to serve no other purpose. Yard trimmings and other compostable materials, such as food waste, comprise 28 percent of material in U.S. landfills. This is an alarming amount of material that otherwise could have been composted... Click Here to Read More. 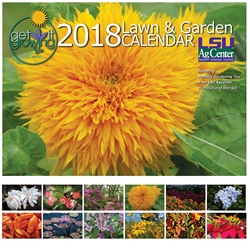