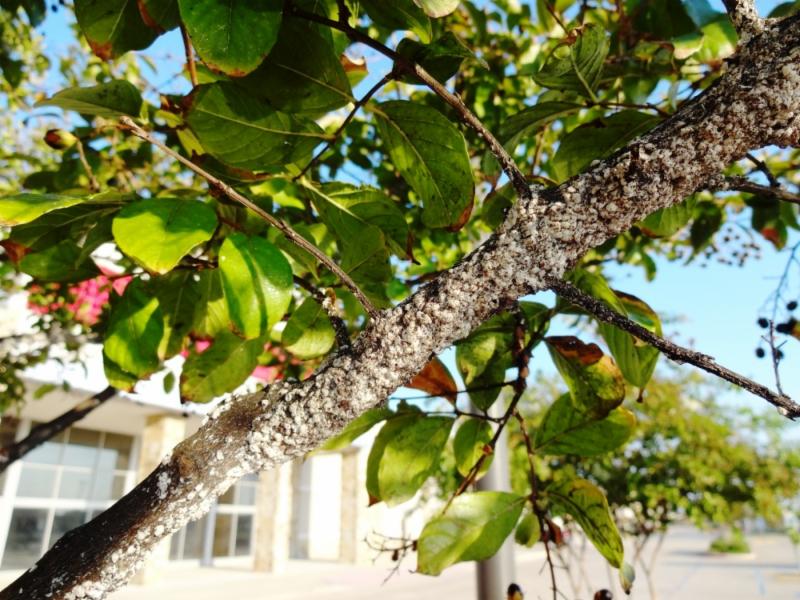 Crapemyrtles are considered an essential southern plant for good reasons. Selected from Lagerstroemia indica or its hybrid with L. fauriei , these summer-flowering trees provide us spectacular flowers, colorful autumn foliage, and handsome sculptural trunks that few other plants can match. The crapemyrtle bark scale (CMBS), Acanthococcus (previously Eriococcus ) lagerstroemiae , was first detected in TX 2004, and has quickly spread to 12 states by 2016. An article on its distribution, damage, life stage, and population trends was published in the Spring 2016 issue of Louisiana Agriculture and 2016 Hammond Research Station Field Day Book.

New infestations have been reported from Covington and Mandeville, La in 2017. In addition, other than crapemyrtles, so far CMBS is confirmed on beautyberry ( Callicarpa americana ) in open field, and pomegranate ( Punica granatum ), henna ( Lawsonia inermis ), heimia ( Heimia salicifolia ), and winged loosestrife ( Lythrum alatum ) in greenhouse tests. This has raised concerns of this pest being capable of infesting native flora of the North America.

Bacillus thuringiensis as a biopesticide applied to plants

Bacillus thuringiensis ( Bt) is a rod shaped, gram-positive bacteria that forms a spore and is found in the soil. Classification of this bacteria includes Bacteria (domain); Eubacteria (kingdom); Firmicutes (phylum); Bacilli (class); Bacillales (order); Bacillaceae (family). Bt was isolated in 1901 and named in 1911. It was used as a commercial biopesticide for the first time in the United States in 1958. It is placed in IRAC group 11, microbial disruptors of insect midgut membranes. Bt is toxic to caterpillars, some fly larvae, and some beetle larvae but not toxic to other organisms. A few strains of Bt are available in products used in the United States. Bt var. kurstaki is toxic to lepidopteran (butterfly, skipper, and moth) larvae; Bt var. aizawai is toxic to wax moth larvae; Bt var. israelensis is toxic to mosquito, midge, fungus gnats, and blackfly larvae; Bt var. galleriae is toxic to larvae of May or June beetles (white grubs); Bt var. tenebrionis (or var. San Diego) is toxic to Colorado potato beetle, elm leaf beetle, and willow leaf beetle larvae. However, Bt var. tenebrionis does not kill all leaf beetles.

Bt strains are very specific to the insects they kill. Therefore, identification of the injurious insect is very important. The correct strain must be applied to susceptible insects.

As the temperatures begin to cool, lawns are growing more slowly as the turf prepares for winter. During this time many people will ask if they need to winterize their lawn. Although this term can have different meanings, many people associate winterizing a lawn with the application of potassium.

Potassium (K+) is a macronutrient that is extremely important in water movement into and within the plant. It has also been shown to be important in increasing turfgrass winter survival. Potassium can help prevent freeze damage by lowering the freezing point within the turfgrass. This is similar to the idea of people living in the North applying salts to their walkways prior to snow.

Of course winter damage is more than just freezing. Many times in Louisiana cooler temperatures in the fall and winter are accompanied by dry spells. Winter desiccation, or drying out of the turfgrass, is often the more troublesome. So check your lawn during dry winter spells and apply irrigation if necessary.