While many Southern gardeners are familiar with the intoxicatingly sweet fragrance of the ubiquitous sweet olive tree in Louisiana landscapes, the true edible olive ( Olea europaea) is beginning to find its way into many backyard gardens and commercial landscapes. Numerous retail nurseries are now offering 3-gallon container size olive trees for sale in south Louisiana. As an ornamental landscape plant, olives offer an unusual silver-green foliage color on an easily-pruned medium-sized tree.

More traditionally, olives are known as a useful orchard crop for producing culinary olive oil, table or eating olives, and olive oil-derived products for skin and hair care. The United States is the world’s largest consumer of olive oil, but only about five percent is produced domestically. With more than 35,000 acres in cultivation, California has long been the largest domestic olive producer. However, the last decade has witnessed the growth of olive orchards in southern states such as Texas, Georgia and Florida. Texas alone now boasts more than 4,000 acres of olive trees, putting a new twist on the old concept of an oil boom in that state.

This ever-increasing interest in growing olive trees in Louisiana began generating quite a few questions for the LSU AgCenter... Read more here. 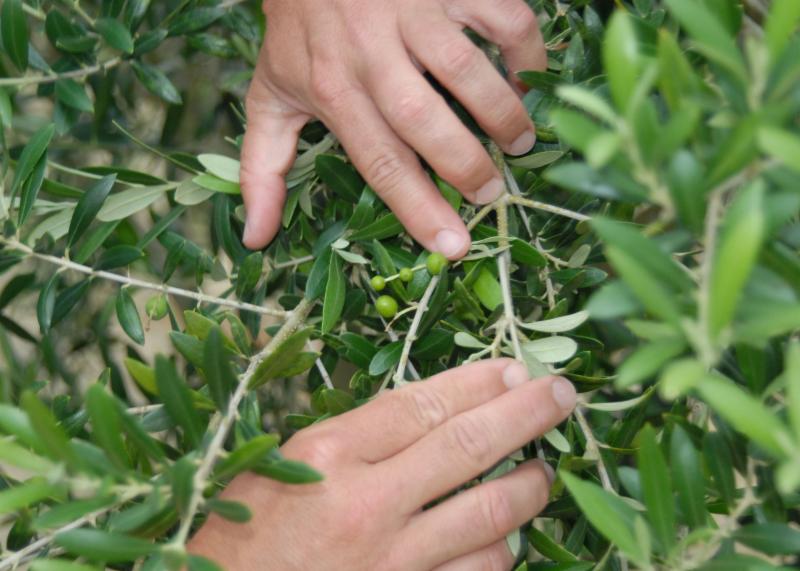 Olives can be grown both for fruit and as an ornamental plant in the landscape. The fruits require six to eight months for full maturation. Table olives are harvested earlier, when they’re firm, and oil olives are left on trees until oil content reaches 20 to 30 percent in late fall.

Individual olive trees are planted 15-25 feet apart in rows 25 feet apart in an initial varietal evaluation at the Hammond Research Station in Hammond, Louisiana. Scientists are trying to find varieties that will grow in Louisiana. 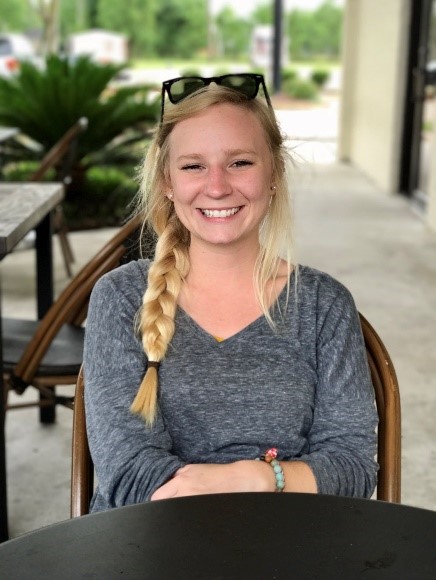 Ashley Edwards earned a Bachelor of Science degree in biology in 2014 from Southeastern Louisiana University. She gained experience and established her love for horticulture when she started working at the Hammond Research Station as a student worker in 2009 under Dr. Yan Chen. Upon graduating, she worked full time as a farm laborer at the HRS for six months. She then ventured out for a couple of years and pursued a career teaching middle school science. Ashley has a passion for research, education, nature, plants (of course), and has a hands-on approach to learning. Other interests and hobbies include hiking, biking, stargazing and coffee drinking. Ashley was hired as a research associate at the HRS in August 2017. She is elated to be back “home” at the HRS and is excited about her present and future career with the AgCenter. She plans to further her education by pursuing a master’s degree or doctorate in the near future. You can reach her at aedwards@agcenter.lsu.edu

Insect and Disease Challenges for Growing the Tea Plant 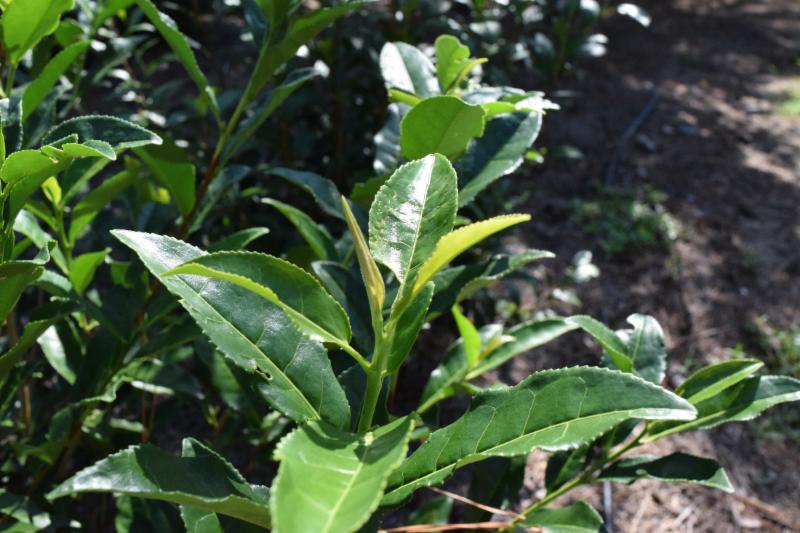 Worldwide, tea is the most popular drink after water, and all types of tea — white, green, black, oolong and fermented (such as puerh) — come from leaves of one plant, Camellia sinensis (Figure 1). Estimated market value of tea in the U.S., including bagged tea, bottled tea, loose tea and tea consumed at restaurants, was $12 billion in 2016, according to the Tea Association of the USA. This demand is almost completely met by imports, making the United States the second largest tea importing country only after Russia.

The microclimates and acidic soils in many areas across the country are suitable for growing tea, and commercial tea production has been growing in recent years because of demand for locally grown tea. Tea farms have been established in Mississippi, South Carolina, Texas and Idaho, in addition to farms in Alabama, California, Georgia, Florida, Hawaii, Michigan, New Jersey, Ohio and Washington State. In addition, growers of other specialty crops can add tea to their production because tea has similar growing requirements to blueberry and citrus.

Since 2013, the LSU AgCenter Hammond Research Station has worked with tea growers and enthusiasts in Louisiana... Read more here.

The time is now to start adding flowers for the fall months ahead. The new Louisiana Super Plant from the LSU AgCenter for fall is the Supertunia Vista Bubblegum petunia. This is one of the most talked-about petunias over the past three to five years and one of the best petunias in landscape trials at the LSU AgCenter’s Hammond Research Station. The flowers are a clear, bright pink. Over the past few years it has been proven that Supertunia Vista Bubblegum is one of Louisiana’s most durable petunia varieties.

Supertunia Vista Bubblegum is a vigorous petunia with a 3-foot spread at maturity. It can grow 16 to 24 inches tall. Plant these petunias in full sun in well-drained soil. Petunias prefer an acidic soil in the pH range of 5.5 to 6.5. A mulch of pine straw improves the appearance of the landscape bed and minimizes upward splashing of water from irrigation while helping with weed control.

When mass-planted in the landscape bed, it is best to plant the petunias on... Read More Here .

Buddy Lee has done it again. The White Wedding hydrangea paniculata is a new introduction from Plant Development Services, Inc. for the Southern Living Plant Collection. This plant has been evaluated in the Piney Woods Garden at the LSU AgCenter Hammond Research Station. White Wedding is shorter growing with sturdy, upright branches. Stems support the large clusters of white blooms. The bloom size is very large compared to the size of the plant canopy. This new hydrangea paniculata can be used as a cut flower, as an accent plant or in mass planting. Large container plantings (as a "filler" or "thriller") would also be an option. In 2017, the blooms lasted well into the late summer months. This variety matures at 4 to 6 feet tall with a 3-to-5-foot spread. Paniculata-type hydrangeas can tolerate more sun than garden and oakleaf varieties. White Wedding will be increasingly available from Louisiana growers in 2018. This would offer a good alternative white bloomer as compared to the taller growing Limelight and the dwarf form of Limelight, called Little Lime. It is also a smaller option in the landscape than the popular larger growing white flower paniculatas like Phantom.

The Megawatt begonias are a new interspecific hybrid that debuted in 2017 from PanAmerican Seed. A couple new varieties have been added to the series for 2018. Plants are being trialed at the LSU AgCenter Hammond Research Station. Varieties include 'Red Green Leaf', 'Pink Bronze Leaf', 'Rose Green Leaf', 'Red Bronze Leaf' and 'Rose Bronze Leaf'. These are best adapted to partly sunny to partly shady landscape plantings. Mature at 24" tall with a spread of 16-18" in the late summer/early fall landscape. As with the comparable Big and Whopper series of begonias, these need wider spacing between individual plants in the landscape (16-18 inches). Megawatt begonias will work well in large container plantings. PanAmerican Seed promotes these as MEGAsize + MEGAcolours = MEGAsales. (pictured is 'Megawatt Red Green Leaf').

The majority of systemic insecticides are transported in the xylem to the leaves. A newer chemical, spirotetramat, is transported in both xylem and phloem, providing systemic activity against insects feeding on saps from either of these transportation tissues. Spirotetramat interferes with fat synthesis and the development of immature insects and is slow acting. Once immature insects eat spirotetramat, they die in two to five days. It has little activity against adult insects.

After application, spirotetramat penetrates the leaf (translaminar) and is translocated down the plant to the roots and up the plant to developing shoots. This movement protects growing plant parts and also allows the insecticide to manage feeding below ground on the roots. Although spirotetramat is systemic and translaminar, it is only active if ingested and won’t work by just contacting the pests.

Spirotetramat is effective against aphids, mealy bugs, psyllids, soft and armored scales, whiteflies, some thrips and spider mites. Spirotetramat should be applied when numbers of insects are low and in the early stages of the infestation. For scales, applications should be made at the crawler stage. Spirotetramat is harmless to slightly harmful to beneficials, such as hoverfly larvae, spiders, predatory bugs, wasp parasites, ladybird beetles and lacewings. Products containing spirotetramat include Kontos (greenhouse and nursery production) and Movento (fruits and vegetable).