Water is at the center of the LSU AgCenter Red River Research Station.

Most of the research performed on the station’s 573 acres seeks answers to questions of how agriculture affects our water resources.

Over the past decade, the station has changed its focus toward water quality and the efficient use of water. In the past scientists at Red River conducted traditional agronomic and pest management studies on crops, but greater interest in irrigation and concerns about water quality led the AgCenter to shift the focus at the station.

“Everybody thinks Louisiana has a lot of water,” said Patrick Colyer, director of the station and the AgCenter Northwest Region. “Overall, we do, but with increasing demand for water and concerns about the contribution of agricultural activities to water quality, we made this commitment to start taking a closer look at our water resources.”

“For any outsider to hear that we are in Louisiana and doing irrigation, it kind of sounds strange,” Dodla said. “We get anywhere from 45 to 60 inches of rain. If you look in north Louisiana and in northwest Louisiana we are not as high in rainfall. And the rainfall is not as uniform. It became common for farmers to irrigate in June, July and August.”

Located just outside of Bossier City and across the Red River from Shreveport, the Red River Research Station was founded in 1947. Many who travel U.S. Highway 71 south of Barksdale Air Force Base know the station from its big red barn painted with the LSU AgCenter logo, an iconic sight in the region.

Agriculture has changed dramatically since the station’s founding. Irrigation became more important when producers changed their crops from predominately cotton to more acres of soybeans and corn, which demand more water, Colyer said.

“Cotton is your classic Southern crop,” he said. “It does well in a hot, dry environment. That’s why cotton was king in the South.”

As researchers retired, the new scientists hired at Red River were often experts in water quality and water use. Fertility, tilling the soil and other typical agricultural research topics are still studied, but their effects on water use and water quality were incorporated into the research, Colyer said.

“We didn’t change a lot of what we actually do day-to-day,” he said. “We still plant agronomic crops. We still conduct pest management programs, but we added an additional focus on water use efficiency.”

One innovative feature of the station, a tailwater irrigation pond system, could one day become common at farms across north Louisiana. Water drains from the fields into one shallow pond filled with vegetation that helps collect sediment and nutrients from the irrigation water, filtering it before it flows into the larger deep pond, which can be used to irrigate the fields again.

“These are crucial,” Dodla said. “They not only help to minimize the groundwater usage but also help to recycle the nutrients back to the farm.”

While studying water use and quality are top priorities at the station, other important research is done at Red River. Forage specialists evaluate the grass and legumes used to feed livestock on 190 acres of pasture. Soybean breeder Blair Buckley is developing disease resistant, high yielding genetic material at the station, and he evaluates advanced breeding lines and new varieties. Also, in three large greenhouses, horticulturists evaluate tomato varieties, an area of study that attracts many visitors.

Each summer research technicians evaluate these tomatoes. The indeterminate varieties grown in the greenhouses reach 20 to 30 feet tall, and the fruit attracts visitors from all over the Shreveport and Bossier City area as the tomatoes go on sale in the station office.

“People love to eat them,” he said. “We do a lot of field trips, people from some of the garden clubs and other civic organizations come out and see them.”

The tomatoes began as a research area for horticulturist Hanna Y. Hanna, who died in 2013. Yet the station has continued growing the tomatoes and studying the impact of production practices on fertility and water quality, Colyer said.

Selling tomatoes and giving tours helps connect the station to the people of the region, Colyer said. The region, the Shreveport-Bossier City metropolitan area, has a population of more than 390,000.

“We’re right on the edge of the city now,” Colyer said. “We’re not as rural as we used to be, so the greenhouse tomatoes help us connect with the local community better.”

Red River researchers and area AgCenter extension agents also try to connect with and educate north Louisianians at AgMagic at the State Fair of Louisiana each fall. Colyer sees the research station’s mission as more than just research. It can also help educate.

“We’re just trying to provide information,” Colyer said, “about agriculture and what it means to their daily lives.”

Kyle Peveto is an assistant communications specialist and associate editor of Louisiana Agriculture.

(This article appears in the fall 2021 issue of Louisiana Agriculture.)

The red barn at the front of the LSU AgCenter Red River Research Station is well known to drivers who travel Louisiana Highway 71. Photo by Luke Bullock 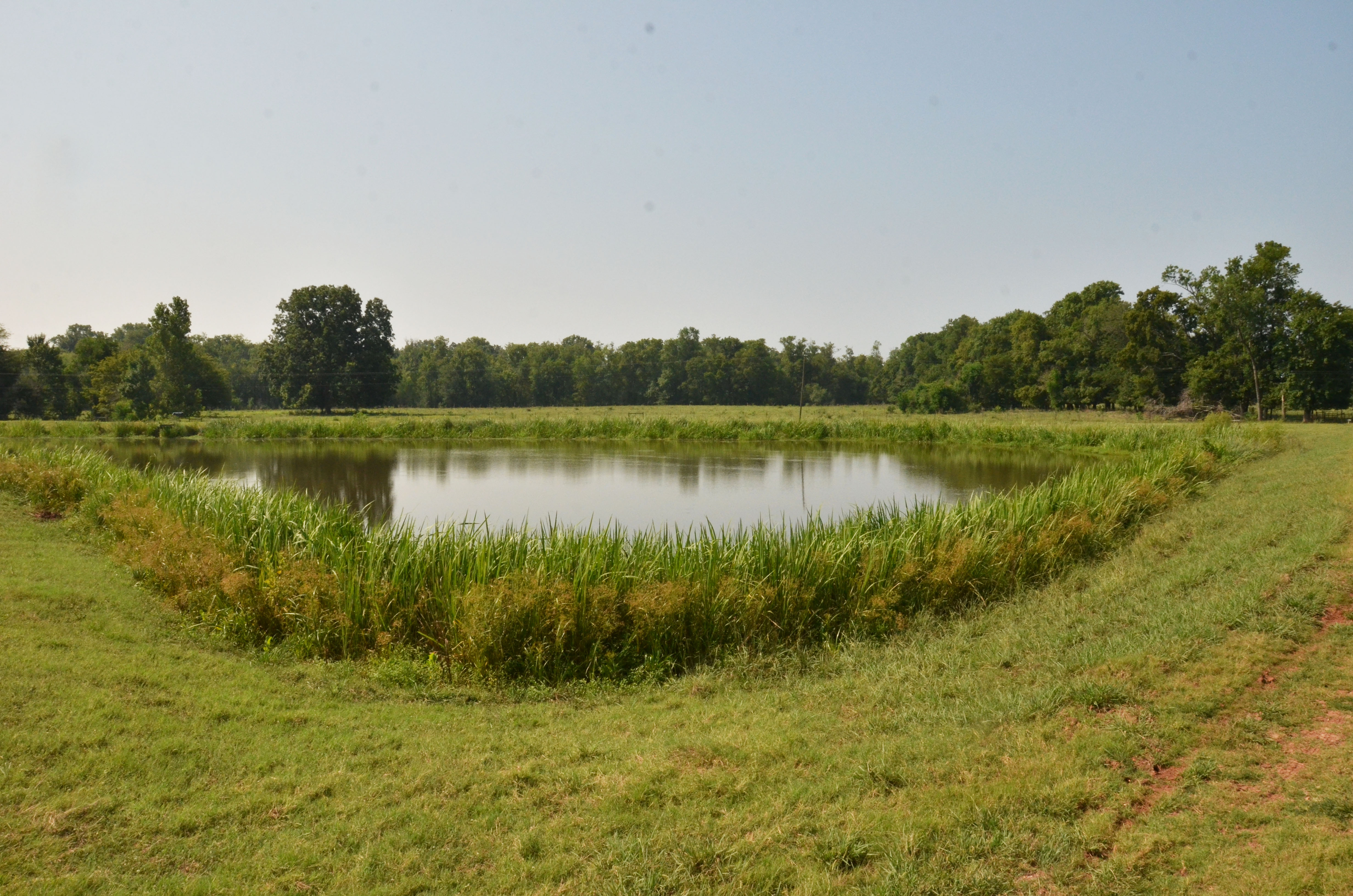 A deep pond is part of a tailwater recovery system at the LSU AgCenter Red River Research Station. Irrigation water flows off the fields and into a shallow pond filled with plants that filter sediment out of the water before flowing into the deep pond. The water can then be recycled or can flow into a nearby stream. Photo by Kyle Peveto 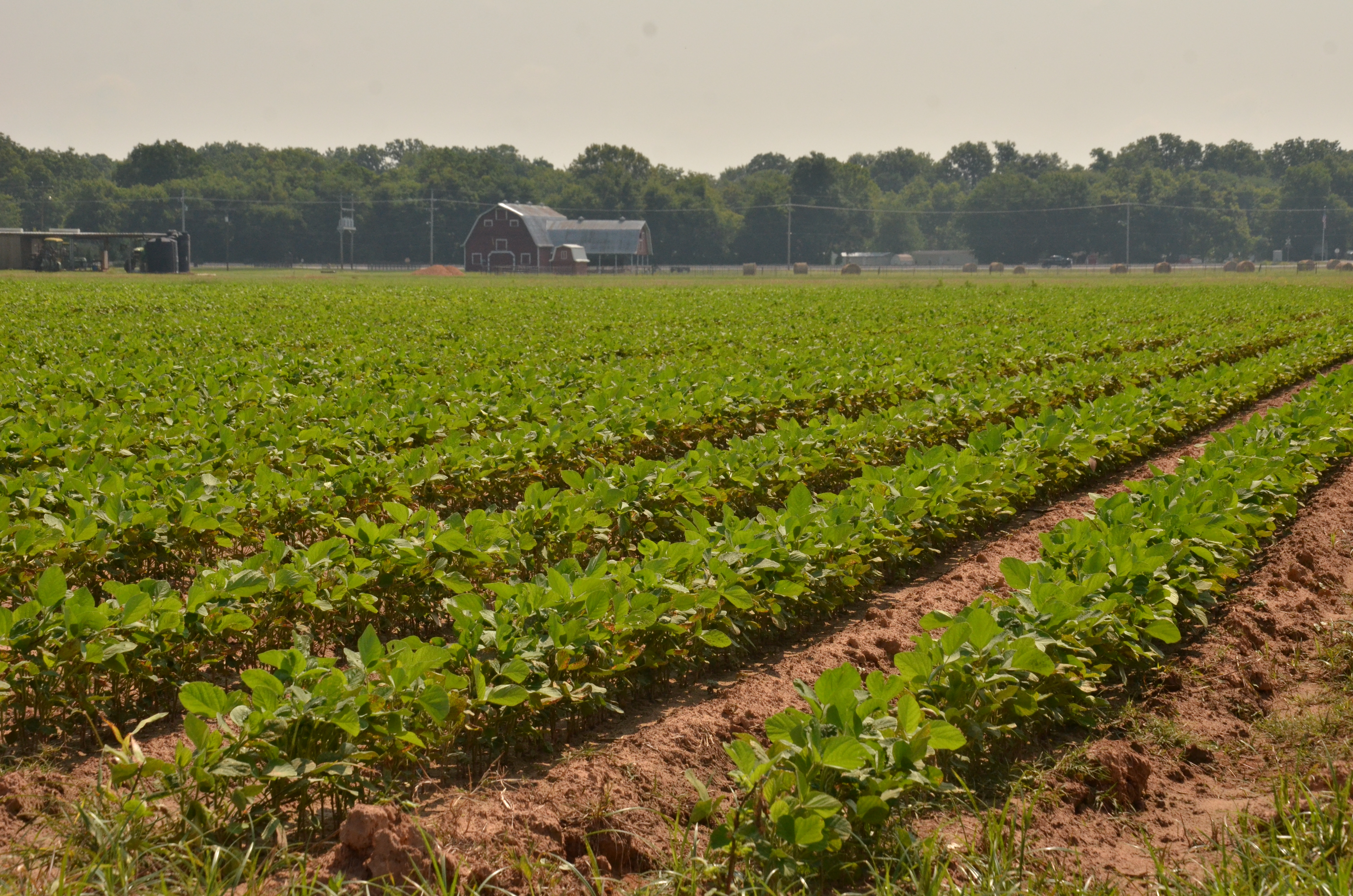 Soybeans have become an important crop in northern Louisiana, and the LSU AgCenter Red River Research Station conducts studies on soybeans and has a soybean breeder working at the station. Photo by Kyle Peveto