The LSU AgCenter wheat and oat breeding program serves Louisiana growers by providing them with regionally adapted, high-yielding varieties that have good disease resistance and favorable agronomic characteristics. The breeding program has developed and released 25 wheat and oat varieties since 1996, an average of one new variety per year. All releases were commercialized, and most were licensed to regional seed companies to increase the seed and make the variety available to producers.

It takes about 10 generations from the time two parents are crossed until a new variety is available to growers. The LSU AgCenter breeding program makes about 450 new wheat crosses each year, which then begins a new 10-year cycle. The first few years of the breeding cycle are focused on generation advancement and formation of pure lines from the segregating populations that were created by crossing desirable parents. Starting with the third generation, individual heads are harvested from healthy plants that have good agronomic characteristics and are visually appealing. Each head is threshed and kept separate, grouped by family. Thirty to 50 seeds from a given head are planted in a short “headrow,” which is a single row grown from the seed on a single head. Currently, there are 52,000 genetically distinct headrows at the Central Research Station, in Baton Rouge, and the Macon Ridge Research Station, in Winnsboro, Louisiana.

Starting with the sixth generation, headrows are carefully evaluated and about 1,200 whole rows of desirable breeding lines are hand harvested to produce enough seed to plant a yield plot at the Baton Rouge and Winnsboro research stations the following year. Many breeding lines that enter first-year yield trials are genetically sequenced and analyzed to determine their estimated breeding value. This data along with molecular marker data for specific genes associated with desirable traits is then combined with information about actual field performance from single plots at two locations (yield, disease reaction, etc.) and used to decide which breeding lines to advance to replicated trials over multiple locations.

By the time a wheat or oat variety is released and commercially marketed, it has been evaluated in yield trials for at least four years and tested in regional breeder trials and in official variety trials of surrounding states. Prior to release, each breeding line is screened in disease and insect trials to determine its reaction. Each line is also evaluated with a panel of molecular markers to determine presence of genes that confer resistance to diseases such as stripe rust and Fusarium head blight and to insects such as the Hessian fly, one of the most destructive pests of wheat worldwide.

SunGrains university breeders have released 20 oat, 10 triticale (a wheat and rye hybrid) and 35 wheat varieties since 2010, which are widely grown across the region under numerous company names. SunGrains breeding programs have complete and open exchange of breeding material, including the ability to make crosses using any SunGrains germplasm and the right to select and advance each other’s breeding lines when they are more suited to a breeding program other than the one that developed the breeding line.

There are five SunGrains wheat yield trials and two oat yield trials that evaluate advanced breeding lines across the region. This allows each breeder to select among a much larger group of elite breeding lines and frequently results in identification and release of a variety by one breeder that originated with another breeder. Data from these nurseries provide a strong basis for variety release decisions and help to identify the range of adaptation of each variety release.

The LSU AgCenter and University of Florida have a highly collaborative oat breeding program that has jointly released 15 oat varieties since 2005. Oat varieties developed by this combined effort include those that are licensed and marketed by two Louisiana-based companies. Oat varieties developed by the AgCenter program include those that are used for animal feed, in mixed winter pastures, for cover crop and conservation tillage and as wildlife food plots.

The LSU AgCenter oat breeding program also coordinates the USDA International Oat Nursery that serves as a means of germplasm exchange for 30 oat breeders around the world. The program collects, increases and distributes a set of about 250 oat lines each year and serves as a means of sharing oat germplasm with unique disease resistance genes, good milling quality and high forage yield.

(This article appears in the spring 2021 issue of Louisiana Agriculture.)

Steve Harrison, who leads the wheat and oat breeding programs at the LSU AgCenter, stands in front of a plot of triticale, a wheat and cereal rye hybrid used as a divider between wheat fields at the Macon Ridge Research Station in Winnsboro, Louisiana. Photo by Bruce Schultz 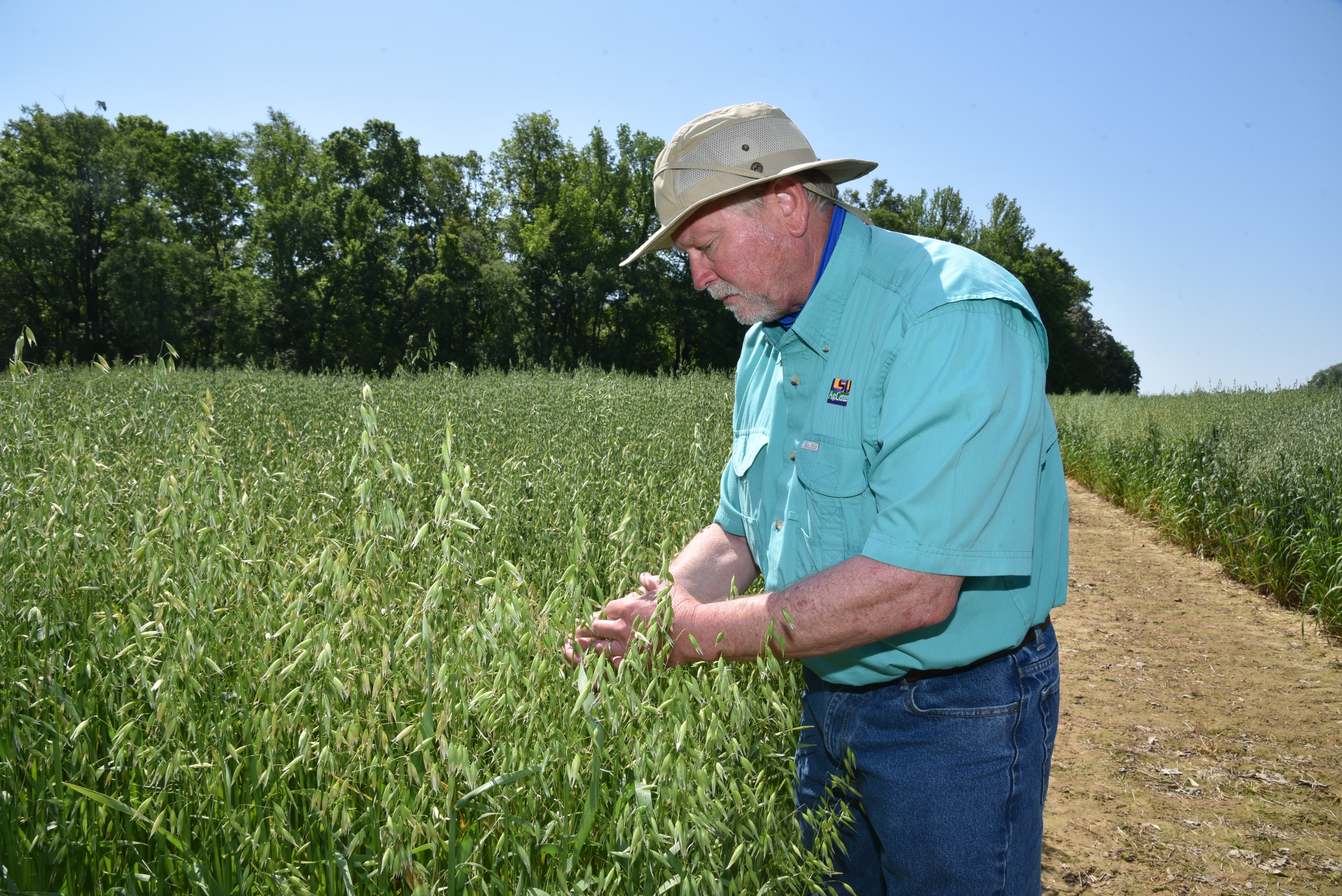