Break Up with Salt: Learn to manage hypertension virtually

In Louisiana, 39% of adults have hypertension. The rate is 32% for the U.S. population as a whole. Yet, in Louisiana and across the country, personal concern about this condition appears to be dwindling. A study from the National Institutes of Health shows that among Americans, awareness of hypertension and its management have declined during the past seven years. Being overweight or obese is a major risk factor for developing hypertension. According to the Center for Diseases Control and Prevention, nearly 36% of Louisiana’s population is obese.

In response, a team of LSU AgCenter extension specialists and agents developed a new program, Break Up with Salt, for hypertension prevention and management. The program addresses these alarming statistics and focuses on dietary and physical activity approaches to hypertension prevention and management. The target audience is adults with elevated blood pressure or hypertension; however, anyone who cares for someone with hypertension is also encouraged to attend. Working under the assumption that the stay-at-home order was to be lifted by fall 2020, the initial draft of the program was intended for face-to-face interaction and included many hands-on activities that reinforce the concepts presented in the program. When it became clear that the COVID-19 epidemic was intensifying, the team reformatted the program for virtual implementation.

In June 2020, the team began its work on the online version by developing interactive videos. The pilot was launched in September 2020 and was tested by seven teams of extension agents across the state. A marketing plan and materials including flyers, social media advertisements and press releases were created.

The Break Up with Salt program consists of four one-hour weekly virtual sessions, with a follow-up reunion class three to four months after completion.

What Is High Blood Pressure and Changing Your Salty Habits

Participants learn about the preventable and nonpreventable risk factors associated with hypertension. They are then shown how to incorporate small dietary and physical activity changes into their normal routines and how to create habits for a healthier lifestyle to help lower their blood pressure.

Participants are introduced to a science-based eating pattern called Dietary Approaches to Stop Hypertension, or the DASH diet. This eating pattern has been shown to lower blood pressure by lowering sodium intake and by incorporating fruits and vegetables, low-fat or fat-free dairy foods, and high-fiber whole grain foods into the diet. Participants are also shown how to read the nutrition facts label on food packages so that they can make healthful food choices when grocery shopping.

DASH in for Groceries

Participants are taken on a virtual grocery store tour that focuses on foods highlighted in the DASH diet. The tour also points out foods high in saturated and trans fats and high-sodium foods, which should be limited. Tips on how to save food dollars when shopping for healthful foods are also provided.

Participants learn how to lower sodium/salt in foods by preparing more meals at home using herbs, spices and seasonings and how to choose healthful foods when eating out. At the follow-up reunion class, extension family and consumer sciences agents can invite outside speakers, such as pharmacists or cardiologists, to discuss medications or other aspects of hypertension management not covered in the sessions.

At the end of each session, a food preparation demonstration of a healthy recipe is presented via video, and handouts that reinforce concepts taught in the sessions are provided.

The initial pilot test has been completed and revisions to the program, based on feedback from agents and participants, are being made. A second pilot is scheduled to be released in 2021, which will include both virtual and in-person programming. For more information, contact Sandra May at samay@agcenter.lsu.edu.

(This article appears in the winter 2021 issue of Louisiana Agriculture.) 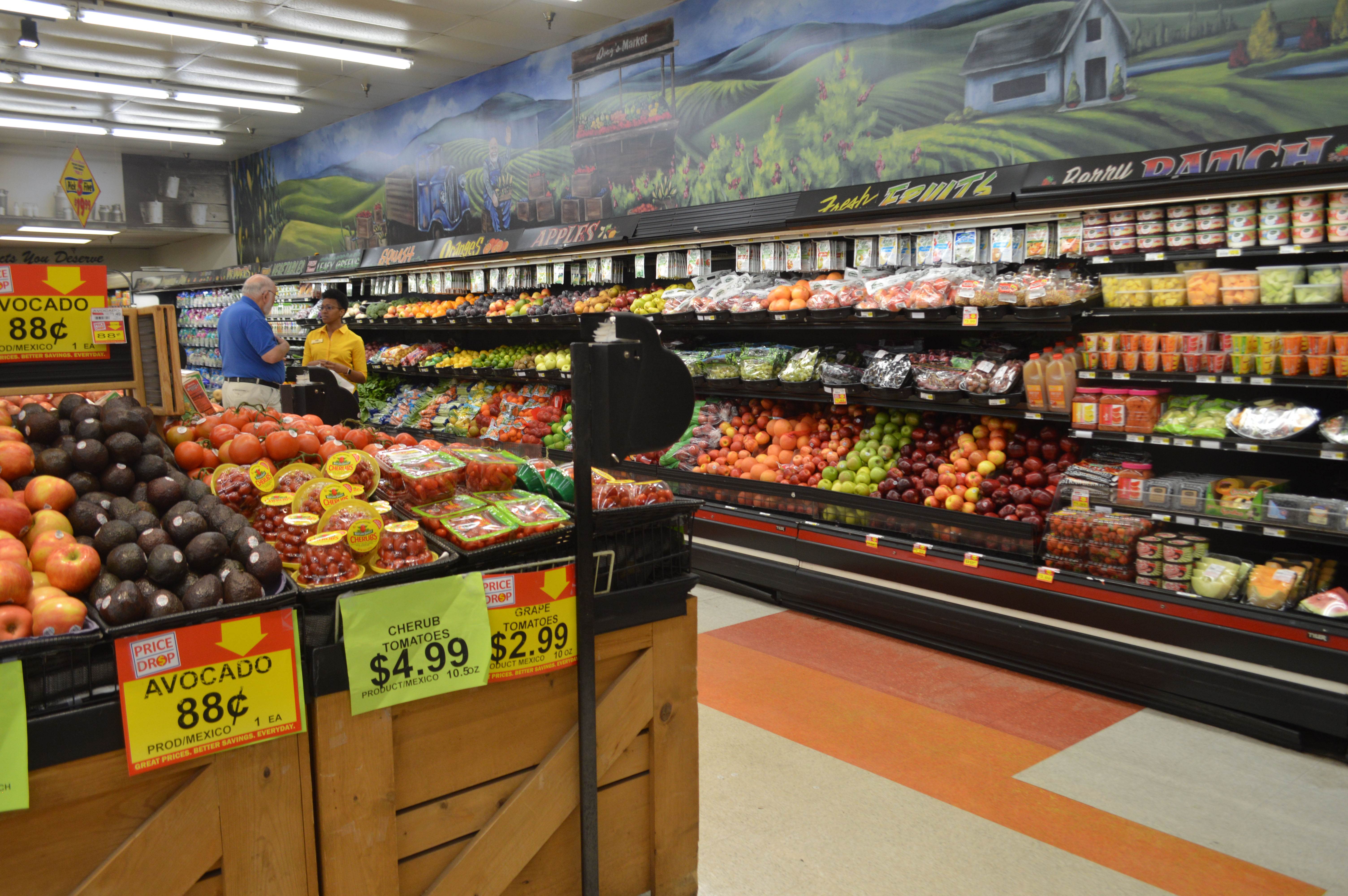 Incorporating more fruits and vegetables in the diet will help people reduce their sodium intake and lower their blood pressure. Shopping at grocery stores with well-stocked produce aisles, such as Doug’s Market in Tallulah, Louisiana, will help people make healthy choices. Photo by Karol Osborne

The graphic used in promoting the Break Up with Salt program. 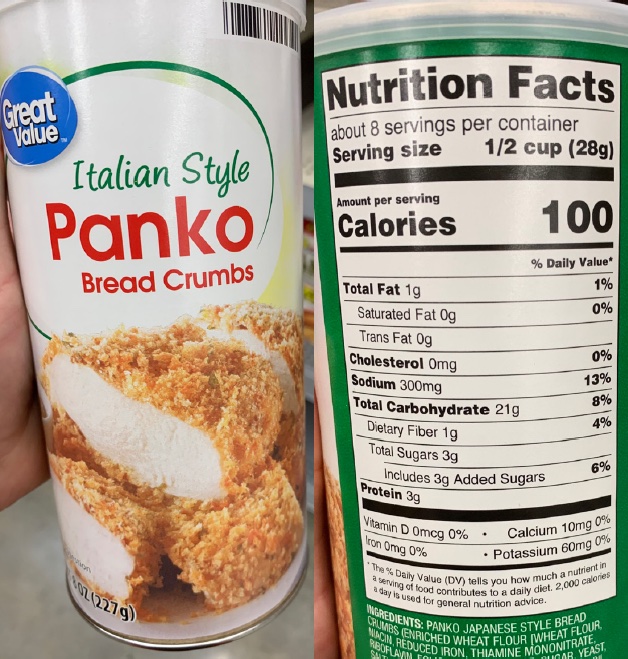 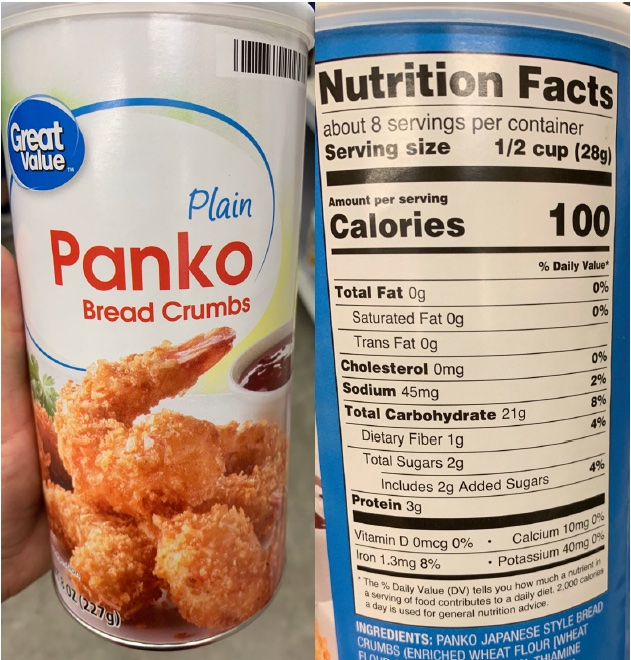 Reading food labels can help people reduce their sodium intake. Note the difference in the sodium content of the Italian-style bread crumbs and the plain bread crumbs. Photos by Sandra May