Soil nutrient enrichment is among the known benefits of using cover crops as a management tool. Winter cover crops are grown in fall through winter. During this period, cover crops absorb nutrients from organic matter decomposition or from underutilized fertilizer applied to the previous main crop, which otherwise would have been left in the soil and subjected to loss through surface runoff, erosion and leaching. When the cover crop is terminated early spring, the decaying biomass releases a full range of nutrients in plant-usable forms. In addition, the cascading positive effects of cover crops on the soil microbial community and water-holding capacity can also increase available nutrients for plants.

Nitrogen is the most sought-after nutrient for credit when practicing cover cropping; however, other plant-essential nutrients are released back to the soil when cover-crop biomass decomposes. Depending on the mixes of cover crop species, significant nutrient contribution other than nitrogen is also expected from the biomass. There are differences in rooting depth, yield potential and carbon-to-nitrogen ratio of biomass among cover crop species. Thus, what, how much and when these nutrients in biomass will become available to the main crop are among the questions regarding nutrient contributions of cover crops.

Several studies were initiated in 2017 on producer fields in central and northeast Louisiana and at LSU AgCenter research stations to provide a general understanding on soil nutrient enrichment from cover crops. Mixes of cover crops species consisting of legumes (such as clovers), brassicas (such as forage radish and rapeseed) and grasses were established in the fall at each location. Prior to termination in early spring of the following year, cover crop biomass and soil samples were collected. These samples were analyzed for nutrient composition and concentration.

A summary of the full range of nutrients recovered per year showed that cover crop mixes consisting of hairy vetch, crimson clover and tillage radish recovered substantially higher amount of nutrients than the native weeds from the no-cover-crop plots (Figure 1). Not only nitrogen but also potassium, calcium, magnesium, phosphorus and sulfur were stored in the biomass — about triple the amount stored in biomass of native weeds. In fact, the average potassium stored in cover-crop biomass per acre was 72 pounds, which exceeded nitrogen at 51 pounds. Trace amounts of micronutrients, including iron, zinc, copper, boron, manganese and molybdenum, were also measured in cover-crop and native-weed biomass. Except for iron, all these micronutrients recovered in biomass were higher in plots with cover crops.

The amount of stored nutrients in cover-crop biomass does not proportionately raise nutrient levels in the soil. Many factors affect the rate by which nutrients are released from plant materials, including temperature, microbial activity and soil pH. As a result, the amount and time of release of nutrients vary among soil types, farming practices and weather conditions. The outcomes from these studies generally indicate a boost in soil nutrient content within the first year of cover cropping.

The outcomes from these studies show cover crop contributions to soil nutrient enrichment could be evident within the first year of practice. The levels of nutrient contribution will vary, depending on the choice of cover crops species, single or in mixes, that may be further compounded by soil types, weather conditions and farming systems. As apparent as it may sound, nutrient contribution from cover crops can also build up with time. With long-term practice, cover crops increase soil organic matter, enhance microbial activity and stabilize soil structure, which collectively improve nutrient cycling and prevent nutrient losses from the soil.

Brenda Tubaña holds the Jack E. and Henrietta Jones Professorship in the School of Plant, Environmental, and Soil Sciences. Lisa M. Fultz is an associate professor in the school, and Daniel Forestieri and Jose Mite are graduate students.

Biomass clippings are taken from 1-square-meter sampling areas along with soil samples prior to cover crop termination in early spring. Photo by Daniel Forestieri 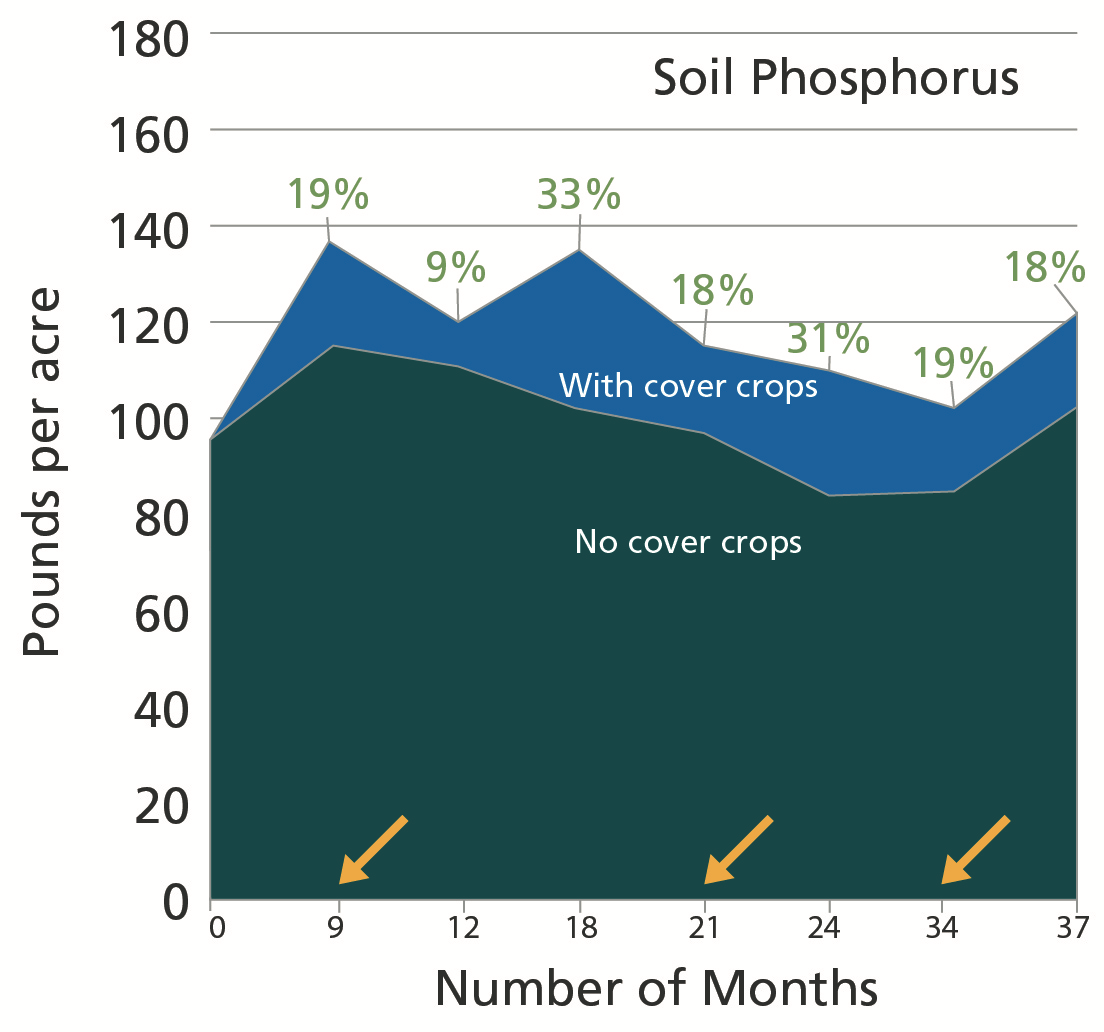 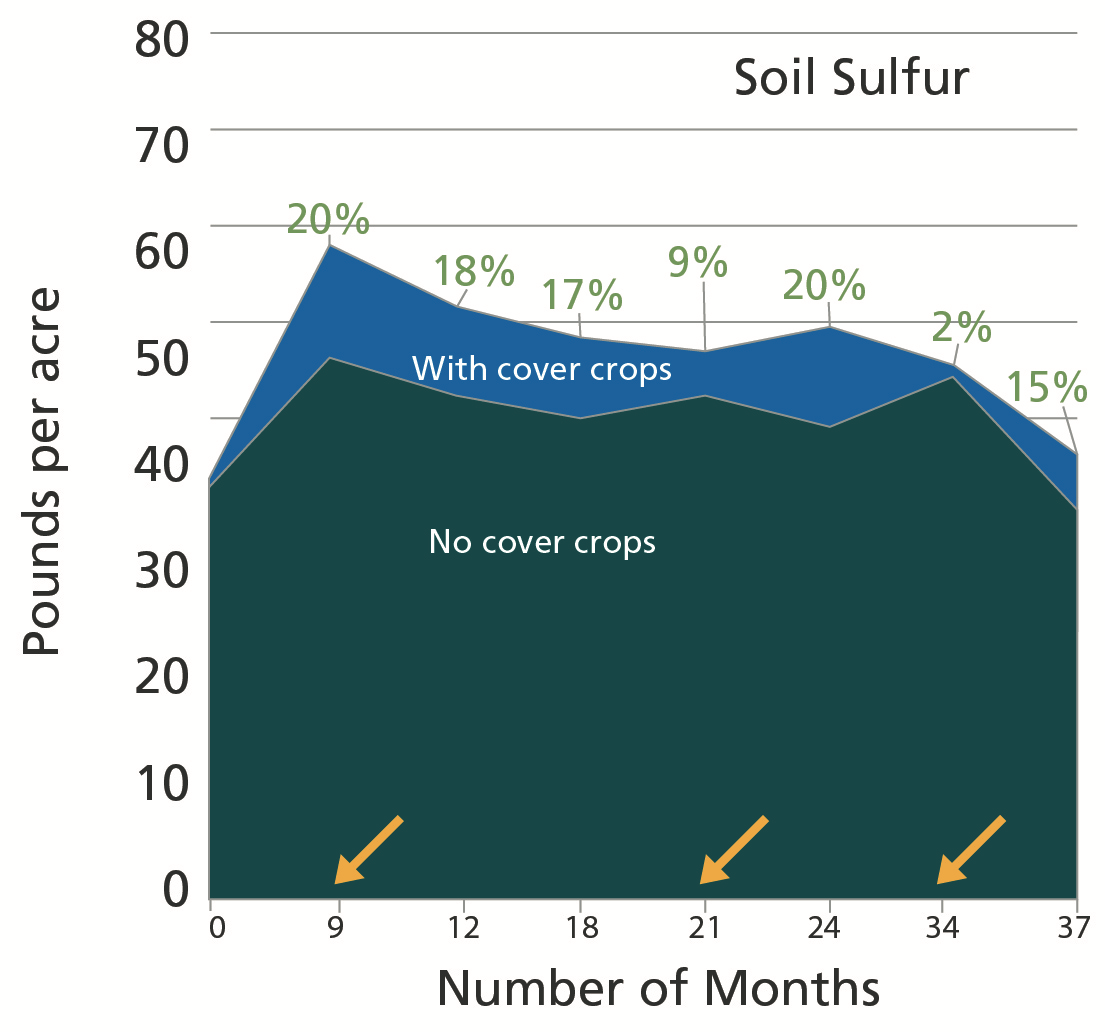