Clover, types of rye and radishes and other cover crops planted when fields would otherwise lay fallow protect soil from erosion and help build up and put nutrients back into the soil.

“There is no silver bullet that will solve all our problems, but cover crops are a tool — not the only tool that’s available — and a potentially effective tool for improving sustainability and soil stability,” said Lisa Fultz, associate professor in the LSU AgCenter School of Plant, Environmental and Soil Sciences.

The practice of planting cover crops has boomed over the past decade. According to the U.S. Department of Agriculture Census of Agriculture, which is taken every five years, eight states more than doubled their cover crop usage from 2012 to 2017. The greatest rise was in Iowa, a 156% increase.

The boom comes as research into the benefits of cover crops and other sustainable agriculture methods has grown over the past 20 years. The USDA and state extension services, including the LSU AgCenter, dedicated resources to cover crop studies, said Robert Myers, the regional director of extension programs for the USDA-National Institute of Food and Agriculture North Central Sustainable Agriculture Research and Education program. Myers, an adjunct associate professor at the University of Missouri-Columbia, conducts a national cover crop survey and has written about cover crop trends.

“Farmers are hearing about cover crops from a lot of different sources, and that has contributed to the growing acreage,” Myers said.

In Louisiana, AgCenter researchers and extension agents are spreading the word on cover crops at field days and crop meetings. Fultz has spoken to so many producers on the topic that she’s known as “the cover crop lady” in some parishes.

About four years ago, James Hendrix, an AgCenter conservation agronomist in Tensas Parish, worked with farmer Nik Morris to start planting clover, oats, rye and other cover crops after his corn and soybean harvest on his fields in north Louisiana near Sterlington.

Morris, who took over his family’s farm in 2005 after finishing college and working in construction management, sees cover crops as an investment in the future, he said.

“If you just look at the numbers for a producer that hasn't done it before, it may at face value seem like it's cost-prohibitive, but I take a more holistic approach at looking at the situation,” Morris said.

Morris has seen results. Fields planted with cover crops have a better soil structure and less soil washing away, and he can start working in the fields faster after a rain.

“It’s not just soil and nutrients,” Morris said. “It’s also time. And it's hard to put a dollar figure on that. It's hard to really put a quantitative value on what that's worth.”

Cover crops have a long history in the United States. Founding Fathers and farmers George Washington and Thomas Jefferson discussed using clover and other cover crops in their letters to one another, but they were in the minority, Myers said.

“It was more common to use tillage and go find a new farm when the soil wore out,” he said.

When farmers used cover crops throughout the 1800s and 1900s, they often aimed to prevent soil erosion. Planting legumes as cover crops because of their ability to add nitrogen to the soil also was common in north Louisiana, Fultz said.

“Even through the 1900s, prior to the development of synthetic pesticides and the emergence of the nitrogen fertilizer industry in the mid-1900s, cover crops were still used on a lot of farms,” Myers said. “They were common, but when we saw synthetic sources of nitrogen and pesticides, that led to cover crop use greatly diminishing until they started to come back in the interest of soil health in the last 20 years.”

Myers’ surveys have revealed that farmers use cover crops for many reasons other than preventing soil erosion. Increasing soil organic matter rises to the top of the list, and Fultz regularly touts that along with nutrient cycling, which is when cover crops scavenge nutrients left in the field and put them back into the soil.

“The potential for nutrient cycling and having that growing root system for a majority of the year means that you're promoting the increase of soil organic matter, which we know has a lot of benefits to soils in general,” Fultz said. “The more that we take care of our soils, ideally, producers are having to spend less money out of pocket to put back into that soil system.”

Fultz has always been interested in soil conservation and became interested in cover crops because of their ability to keep soil in the fields and out of streams and rivers. Now she dedicates about 90% of her work to cover crops.

Statistics show Louisiana lags behind other states in cover crop use, which Fultz attributes to the way many farmers work the land. Some producers in the South work fields on short-term contracts and focus on a few years’ harvests instead of the long term.

“Some of the benefits that you see from cover crops aren't always immediate,” she said. “Putting that money and effort into it when you might not see that benefit for three, four years is not daunting for someone who owns the land or has a long-term contract. They don't necessarily have those long-term guarantees that they'll be managing that field, and if you're not seeing the benefits immediately, sometimes it's a cost-benefit analysis. Is it worth me putting the money and effort into it?”

Morris said some producers will have trouble changing their mindsets. Some farmers have learned from their mentors that they need to start with a clean field and end with a clean field. Planting in a field of cover crops goes against that.

“To change out of that habit of thinking that’s what it takes to maximize yields and make the most money and go from that to the perspective of planting into a green field, it’s hard for it to make sense,” Morris said.

Planting cover crops has been the best choice for some of Morris’ fields, he also thinks that the practice is good for agriculture overall.

“Going back to that holistic approach,” he said, “any time we can minimize our impact in the environment and still produce a crop that the nation or the world needs, we’re steps ahead.”

Kyle Peveto is an assistant specialist in LSU AgCenter Communications and assistant editor of Louisiana Agriculture.

Crimson clover is one of the plants used in cover crop research. Photo by Eddie Millhollon

Hairy vetch is a plant used as a cover crop. Photo by Eddie Millhollon 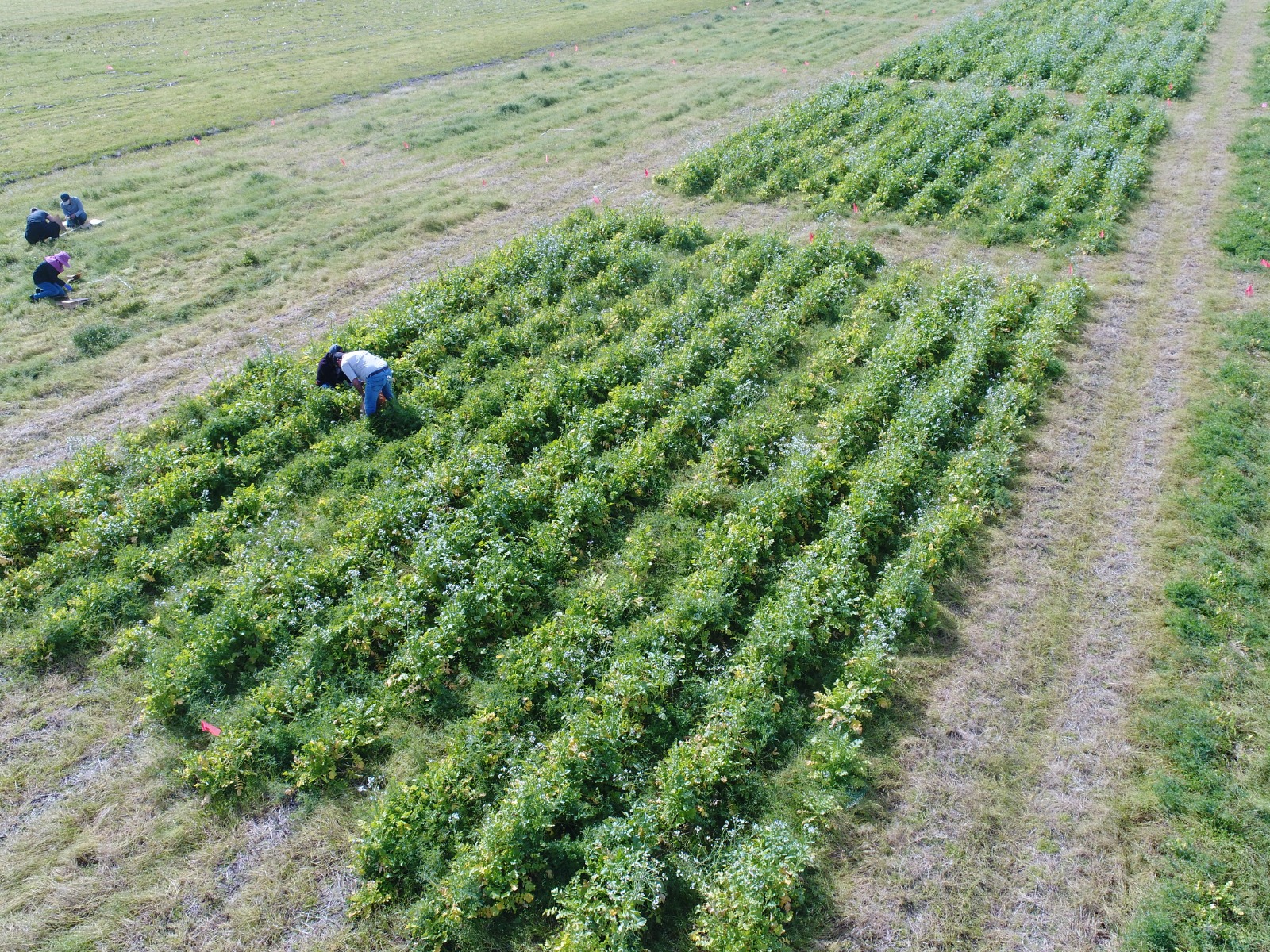 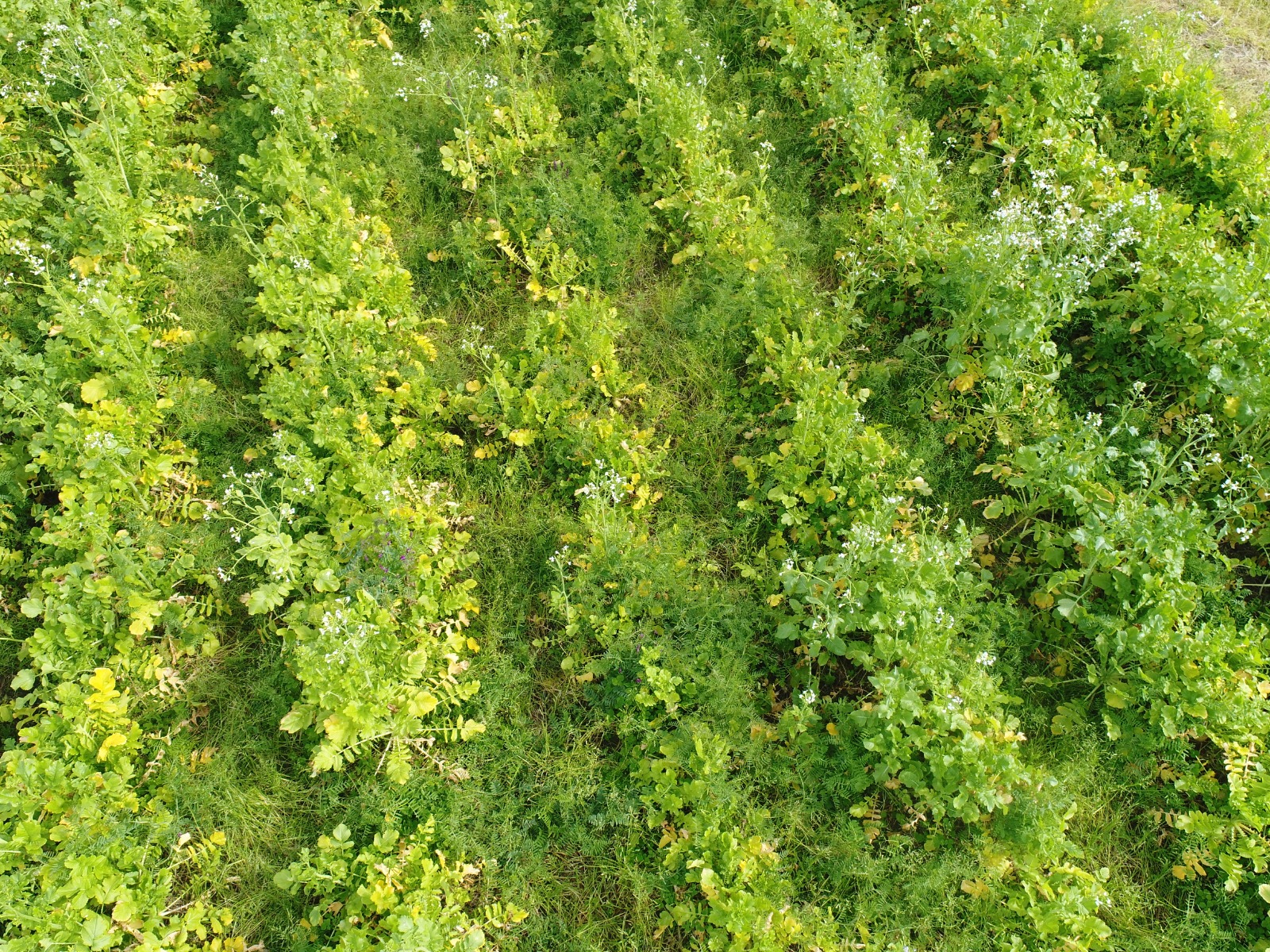 An aerial view of cover crops growing in a field. Photo by Daniel Forestieri