Kathryn Davis, a recent graduate in the Natural Resource Ecology and Management program, has been honored as one of the Spring 2020 LSU Distinguished Undergraduate Researcher Award recipients. Over the past two years, Davis has been involved in a Seaside Sparrow project, which served as her honors thesis.

Davis's research began when she received funding from the President's Future Leaders In Research program, which funds LSU undergraduates to conduct research in their desired field. She started her research in the School of Renewable Natural Resources, working with Sabrina Taylor and Amie Settlecowski. She studied historical changes in the distribution of Bachman's sparrow, an uncommon and elusive native bird. She then became involved with researching the Seaside Sparrow, a tidal marsh bird with a complicated taxonomic history. Analyzing the population structure and genetic variation in Seaside Sparrows has been her focus for the past two years.

Davis credits both of her mentors for her success in her research experiences. "When I studied abroad in Australia and Argentina, both Dr. Taylor and Amie reached out to friends of theirs so I could tag along on other field studies and gain more experience. I couldn't possibly count how many drafts of my Goldwater grant and REU applications they read. I'm extremely grateful for their support over these last four years," Davis said.

Davis will continue to expand her knowledge and research experience and has been offered a position as a resident naturalist for the Alliance for a Sustainable Amazon in Peru and eventually plans to apply for graduate school. William Gaspard Jr.

Tara Smith, director of the LSU AgCenter’s Central Region, has begun a two-year term as the president of the LSU College of Agriculture Alumni Association. A Louisiana native, Smith earned her doctorate in entomology from LSU in 2006.

Smith has made a career working with the AgCenter, and she credits her time as a student in the college as forming the foundation to make that possible. She began her career as an assistant professor and sweet potato specialist. Her dedication to the Louisiana sweet potato industry led to her promotion as the research coordinator of the Sweet Potato Research Station, located in Chase, Louisiana. Smith then was promoted to regional director, overseeing both extension and research programs. Smith remains engaged with the Louisiana sweet potato industry and has continued her role as the coordinator at the station.

Smith has been an active member of the association since 2010, previously serving as secretary and president-elect. As an employee of the AgCenter, Smith found herself working routinely with other alumni from the college. This encouraged her to become involved with the organization. She was soon recruited to join the association’s board.

“We are a great college, and our alumni are engaged and willing to give back their time, talents and financially for the enhancement of our college and to support our current students,” Smith said. “We will be actively engaged in alumni recruiting, marketing our association and fundraising. “

Smith encourages any alumni who want to become involved to reach out to her for more information. Annabelle Stokes

The Association for International Agriculture and Rural Developed (AIARD) has honored David Picha, professor of horticulture in the School of Plant, Environmental and Soil Sciences, as the 2020 AIARD Distinguished Service Award. Each year, AIARD awards individuals who have worked to uphold their mission by improving the quality of life for all people. AIARD recognizes Picha’s service and dedication to AIARD’s programs. Annabelle Stokes 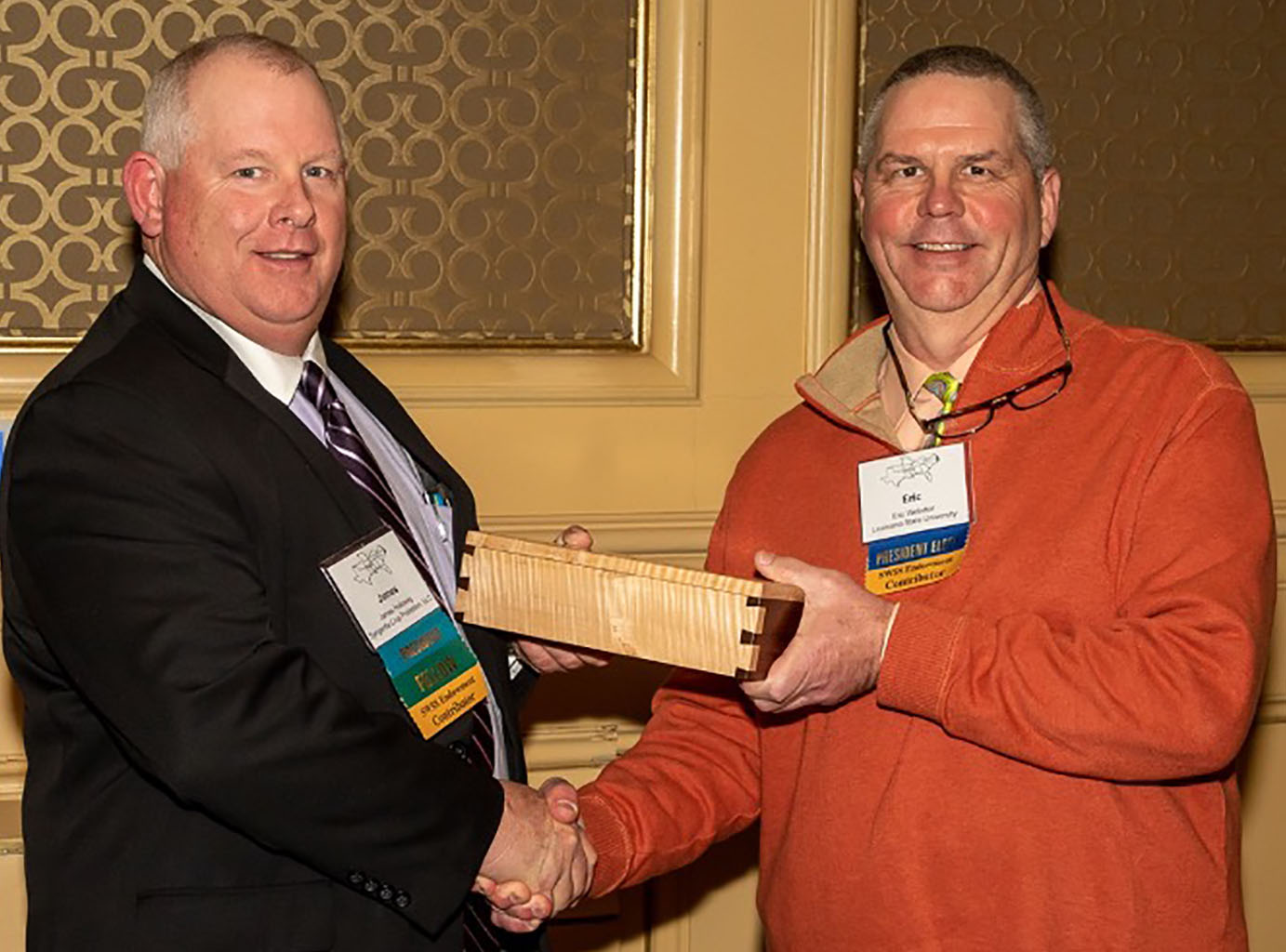 Eric Webster, LSU AgCenter weed scientist, has been elected the 2020 president of the Southern Weed Science Society. Webster is a professor in the School of Plant, Environmental and Sciences and the assistant director in the AgCenter’s Southwest Region. His research focuses on integrated weed management, crop-weed competition, weed biology, herbicide persistence and pest complexes in rice. Webster also serves as the statewide extension specialist for rice weed management. Annabelle Stokes

The American Dairy Science Association has announced that Nicholas Uzee is the 2020 recipient of the Genevieve Christen Distinguished Undergraduate Student Award. Uzee is a recent graduate in the animal sciences program, concentrating in dairy production. This award is given annually to an undergraduate who has demonstrated leadership capabilities, achieved academic excellence, maintained involvement in the dairy industry, and participated in the ADSA Student Affiliate Division (SAD).

Uzee joined the Dairy Science Club during his freshman year. He attributes his involvement with this organization as what sparked his interest in the dairy industry. Uzee recently completed his terms as the LSU Dairy Science Club president and ADSA SAD first vice president. Uzee has attended the U.S. Dairy Education and Training Consortium and the North American Intercollegiate Dairy Challenge and ASAS Academic Quadrathlon.

Uzee is continuing his education at Oklahoma State University, where he has begun a graduate school program studying ruminant nutrition and physiology. “I hope to make an impact on the dairy industry by helping to discover ways to help increase industry sustainability and efficiency through nutrition,” Uzee said. Annabelle Stokes