Pecans are an economically important crop in the United States, with a total crop value of around $470 million in 2019. Louisiana is among the major pecan-producing states, and in 2018, about 7.7 million pounds of pecans were produced in the state, contributing about $12 million to the economy, according to the most recent LSU AgCenter Agricultural Summary.

Every year, however, almost 50% of the total nut, approximately 3.8 million pounds of pecan shells, come out as byproducts, providing little to no revenue for pecan shellers. With this amount of byproduct, growers also have to face a significant disposal issue.

To date, pecan shells have been used mostly as mulch and sparingly to treat wastewater or to generate electricity. But pecan shells could also create added value to the economy because they contain phenolic compounds, which have antioxidant and antimicrobial properties. Phenolic compounds are secondary metabolites produced by plants that may promote good health in the human body. They are classified as bioactive compounds, which have been known to be useful as a natural food preservative.

Because the current food market is moving toward minimally processed foods, there is increased concern among consumers about health risks associated with these foods and synthetic food additives. Minimally processed foods, which do not undergo any significant microbial killing step, have been contaminated with foodborne pathogens like Salmonella, Listeria monocytogenes and Escherichia coli O157: H7, known as E. coli. Thus, the practical application of pecan shell bioactives as natural preservatives on food could potentially increase the value of pecans and the economic competitiveness of pecan growers and processors.

LSU AgCenter researchers have been testing the antimicrobial efficacy of various pecan varieties grown in Louisiana to determine applicability as a natural antimicrobial coating for foods. For this, they collected 19 different cultivars of in-shell pecans grown in Louisiana. They extracted the bioactive compounds using two extraction methods, water and ethanol, to determine the effect of the nut cultivars and extraction methods against Salmonella, E. coli and Listeria, the common foodborne pathogens.

Water-extracted compounds tested more effective than ethanol-extracted compounds for some Listeria monocytogenes strains, whereas ethanol-extracted compounds proved to be more effective for Salmonella strains. Likewise, cultivars behaved differently against different organisms, which could be because of the difference in their bioactive composition. These results showed that the method of shell extraction and the pecan cultivars influenced the antimicrobial activity, and the effect was strain- or bacteria-specific. Overall, a concentration of 1.25% to 5% of extracts was found to be sufficient to inhibit the bacteria, whereas a concentration of more than 5% of the extract was found to be sufficient to kill them. The extracts were effective in reducing Listeria, followed by Salmonella and E. coli.

To determine applicability, these pecan shell extracts were tested against pathogens in fresh-cut cantaloupes and thawed catfish filets. The cantaloupe and catfish filets, both contaminated with Listeria monocytogenes, were stored at refrigerated conditions for five days after being treated with pecan shell extracts. The result was less growth of the bacteria as compared to the control that had not undergone pecan shell extract treatment. Extracts were more effective in controlling bacteria in catfish filets than in cantaloupe. Another positive finding of the research, besides maintaining the safety of the food, was that the extracts at the tested concentrations did not affect color quality.

Shell Extract Use As Antimicrobial Coating

Further research is underway to explore the potential of shell extract use as an antimicrobial coating for produce or food packaging material. Pullulan, which is produced by fungi, is an edible coating material and has excellent coat-forming properties. It is permeable to oxygen and oil and imparts no taste, flavor or color of its own when applied to food.

To study the use of pecan shell extracts in the edible film pullulan, a collaborative research project was established between the LSU AgCenter and Warsaw University of Life Sciences in Warsaw, Poland, in the summer of 2019. AgCenter researchers extracted the bioactive compounds from the Caddo variety pecan and took the material to Poland, where the rest of the study took place.

The study tested the foodborne bacteria inactivation power of pecan shell extracts incorporated into pullulan film. Results indicated the pullulan film with shell extracts effectively inhibited the growth of Staphylococcus aureus, Listeria monocytogenes and Salmonella enterica but was less effective against E. coli. However, at the tested concentrations, the film did not show any antifungal property. Currently, work is ongoing at the AgCenter to develop the pecan shell extracts pullulan coating for produce like tomatoes and test its applicability on maintaining safety, quality and consumer acceptability of food.

Various plant bioactives have been gaining attention as potential natural sources for food preservatives. Pecan shell extracts could be a potential natural antimicrobial agent that has the capability to hinder growth of various foodborne bacterial pathogens. Results from this research will help Louisiana pecan growers and growers from all around the world develop efficient and effective tools to use this commercially important crop and add value to it and make growers more economically competitive.

Achyut Adhikari is an assistant professor and extension food safety specialist, and Karuna Kharel is a graduate student in the School of Nutrition and Food Sciences. 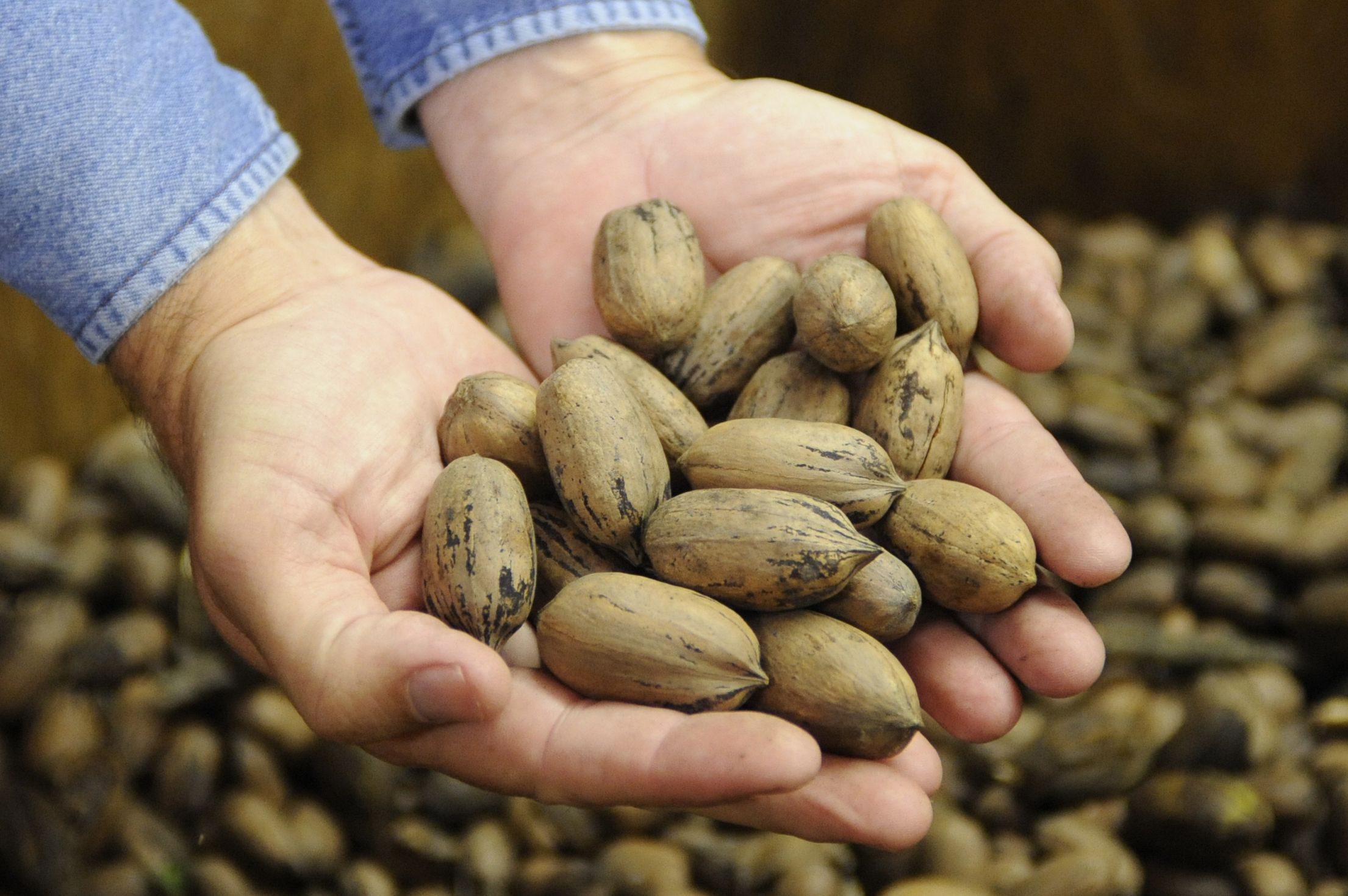 Ph.D. student Karuna Kharel prepares antimicrobial film with pullulan, incorporating pecan shell extract to test its efficacy against foodborne pathogens. She is in a laboratory at Warsaw University of Life Sciences in Poland as part of a collaborative project between that university and the LSU AgCenter. Photo by Karolina Krasniewska

These 6-millimeter discs cut from pecan shell extract-pullulan film will be used to test against foodborne pathogens. Photo by Karuna Kharel

Ground pecan shells were mixed with hexane to remove fat and form a defatted shell powder. This defatted powder was further used to extract antimicrobial compounds. Photo by Karuna Kharel

Antimicrobial discs were placed in agar media with pathogens. After overnight incubation, the transparent zone around the disc is the zone of bacterial inhibition because of the shell extract. Photo by Karuna Kharel