Insects outnumber all other life on the planet by a staggering margin. The discovery of a new mammal or bird is front-page news in science journals, whereas the discovery of new insect species — which can happen right in our own backyards — usually doesn't warrant even a footnote. Yet the importance of insects is undeniable. They eat our crops, kill our trees, bite our skin and crawl across our floors, sending us running for the nearest can of Raid. Moreover, insects are beneficial for humans and other species alike. Honeybees are responsible for the vast majority of pollination around the world, while praying mantises and dragonflies keep those pesky mosquitoes at bay.

As much as insects affect our world, however, we still have much to learn about them. How many species are there? How do they behave? How do they find our crops to eat or one another to mate? Why do mosquitoes and turkey gnats bite me and not my spouse? To answer these questions, LSU AgCenter scientists are conducting studies on the ways insects experience the world. Akin to the human senses, insects experience the world in much the same way through vision (sight), chemoreception (smell and taste), and mechanoreception (touch and hearing).

Vision is a critical sense to the majority of organisms, and the ability to see in color enhances this sense. Humans are trichromatic, meaning our eyes are particularly sensitive to three portions of the visual light spectrum — blue, green and red. Insects, while also trichromats, see blue and green as people do, but they are poor at discerning red. Where they do excel, however, is seeing in the ultraviolet, a portion of the light spectrum we cannot see. Bees in particular rely on UV light to recognize and land on flowers because many flower petals contain UV patterns called flower guides that draw them in.

Some AgCenter researchers specialize in identifying insects and studying coloration and color vision, primarily in the beetles. Beetles are the most diverse order of life on the planet, with nearly half a million described species (and likely many times more that are still undescribed). Some beetles are also debilitating pests of crops and other plants and trees. In Louisiana, beetles, which include weevils, have caused damage to cotton (boll weevil), pine (Southern pine beetle), sugarcane (New Guinea sugarcane weevil) and sweet potato (sweet potato weevil). Scarab and leaf beetles like the Japanese beetle and the May-June beetles can damage both the roots and leaves of ornamental plants and crops.

Unfortunately, many of these pests are invasive and nonnative, having been introduced from other countries through global trade or the transportation of organic material into the United States. One such invasive pest is the emerald ash borer. Introduced from China in 2002, it has since spread rapidly and decimated North America's ash trees. And there is no end in sight. The emerald ash borer is just one species of the so-called "jewel beetles," a large group of insects found around the world. They get their name because of the often-spectacular coloration of most species, which is in stark contrast with the drab and dull browns and blacks of the majority of other beetles. The emerald ash borer is a brilliant emerald green and ruby red, and some evidence indicates this color is important for the beetles to find one another. Furthermore, studies by the U.S. Department of Agriculture discovered that sticky traps of a particular color perform better than others at attracting these beetles for monitoring their spread.

AgCenter researchers have been studying the visual systems of the jewel beetles and have discovered that the vast majority of these insects show sensitivity to three color ranges in the light spectrum: ultraviolet (UV), blue (short-wavelength) and green (long-wavelength). The jewel beetles, however, completely lack the blue-sensitive gene in the eye, effectively rendering them blue-colorblind. Adding to the confusion, earlier works demonstrated that the emerald ash borer is attracted to and responds to blue colors. Further AgCenter studies revealed that all jewel beetles (the Buprestidae, the larger family that includes the emerald ash borer) possess an extra set of UV and green visual genes and likely made minor tweaks to these genes to see a shade of blue once again. This work is the basis of a National Science Foundation grant that has allowed the AgCenter team to gain a better understanding of the vivid colors found across the jewel beetles, both how they are produced and if they are important in communication among one another. This research has taken Ag Center researchers to Paris, France, and Prague, Czech Republic, to study specimens in museums and will take them to the jungles of Vietnam to collect these beetles alive once the COVID-19 pandemic is under control.

One significant feature of jewel beetle color is its iridescence — that is, their colors shift and change as the light or viewer changes position. The beauty of iridescence is not lost on humans, as all sorts of clothing, automobile paints, makeup and daily household items are made to be iridescent. From a biological perspective, iridescence is often used by birds and fish for enhancing visual signals or even as camouflage. While pigmented colors — those most common to us — are formed from chemicals and are relatively easy to measure, iridescent colors are formed from physical structures and can be quite complex to measure and study.

AgCenter researchers are using microscopes to investigate how these iridescent colors are formed by studying the layers of the hard outer shell. This investigation is revealing that the jewel beetles have their shiny appearance because of stacks of cuticle (similar to human fingernails) and pigments, which reflect light in specific ways and in specific colors, giving them their color-shifting iridescence. The team is also quantifying the visual signals by using hi-tech imaging technology to visualize how these beetles appear not only to us, but to birds, insects and other organisms. While many of these colors seem complex, appearing as rainbows, sparkles, stripes and blotches, analyses of image data are allowing for the interpretation of these features in simpler terms like the overall colorfulness, the amount of contrast between colors and the differences between the beetles’ top and bottom surfaces.

To further test whether the extra set of visual genes actually expands visual perception, collaborators at the University of Minnesota are placing these genes in the eyes of fruit flies, then shining specific wavelengths of light at the flies to measure neural response. Although this study is not on the beetles themselves, fruit flies are a common surrogate to more easily achieve accurate measurements than the hard beetles.

Once the colors and signals these beetles possess are better understood, the AgCenter team can move to the next phase of research: performing behavioral tests to confirm the importance of specific colors to communication or host-finding. Those steps will selectively shut down portions of the insects’ visual systems or modify the insects themselves to be different colors than their natural state. For example, if beetles are found to rely heavily on UV or near-infrared colors to detect injured crops — similar to the technique farmers use to monitor their own crops with drone imagery — shutting down these particular visual pathways may disrupt their ability to locate and destroy plants. Additionally, if the emerald green color is found to be a strong attractant for emerald ash borer males to find females, an alteration of the genes that produce those stacks of cuticle could cause green beetles to instead be red and may have a drastic effect on the beetles’ ability to find one another to reproduce.

Nathan P. Lord is an assistant professor and director of the Louisiana State Arthropod Museum in the Department of Entomology.

Acknowledgement: Collaboration with Bodo D. Wilts at the University of Fribourg in Switzerland, who is incorporating optical physics to accurately measure and model these structures; Hannah Weller at Brown University, Providence, Rhode Island; and Trevor Wardill and Camilla R. Sharkey at the University of Minnesota in St. Paul.

(This article appears in the spring 2020 issue of Louisiana Agriculture magazine, which features entomology.) 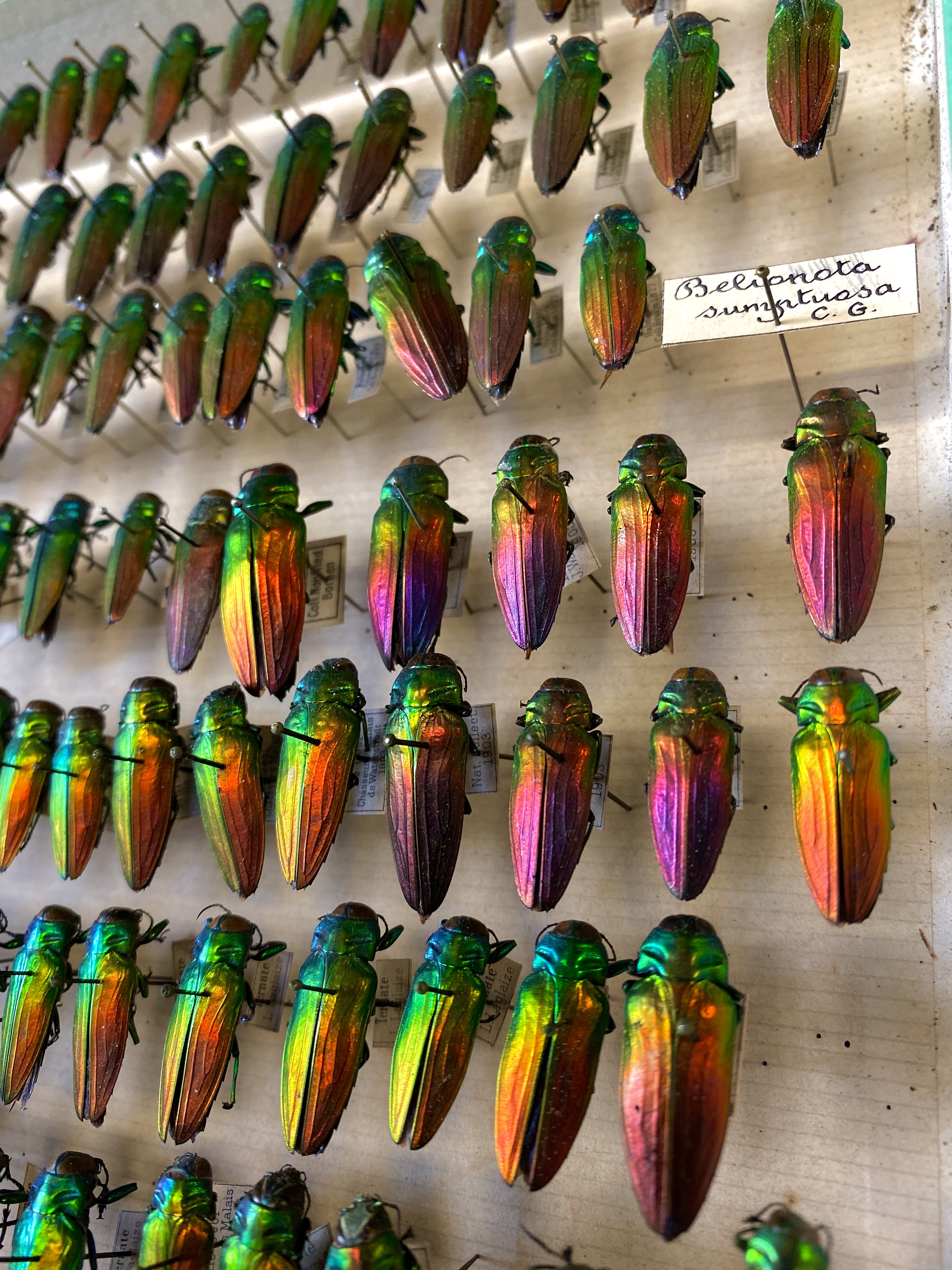 Belionita sumptuosa, an iridescent jewel beetle. Specimens were studied by Nathan Lord and graduate student Able Chow at the Muséum national d'Histoire naturelle in Paris, France, where this photo was taken by Nathan Lord in October 2019. 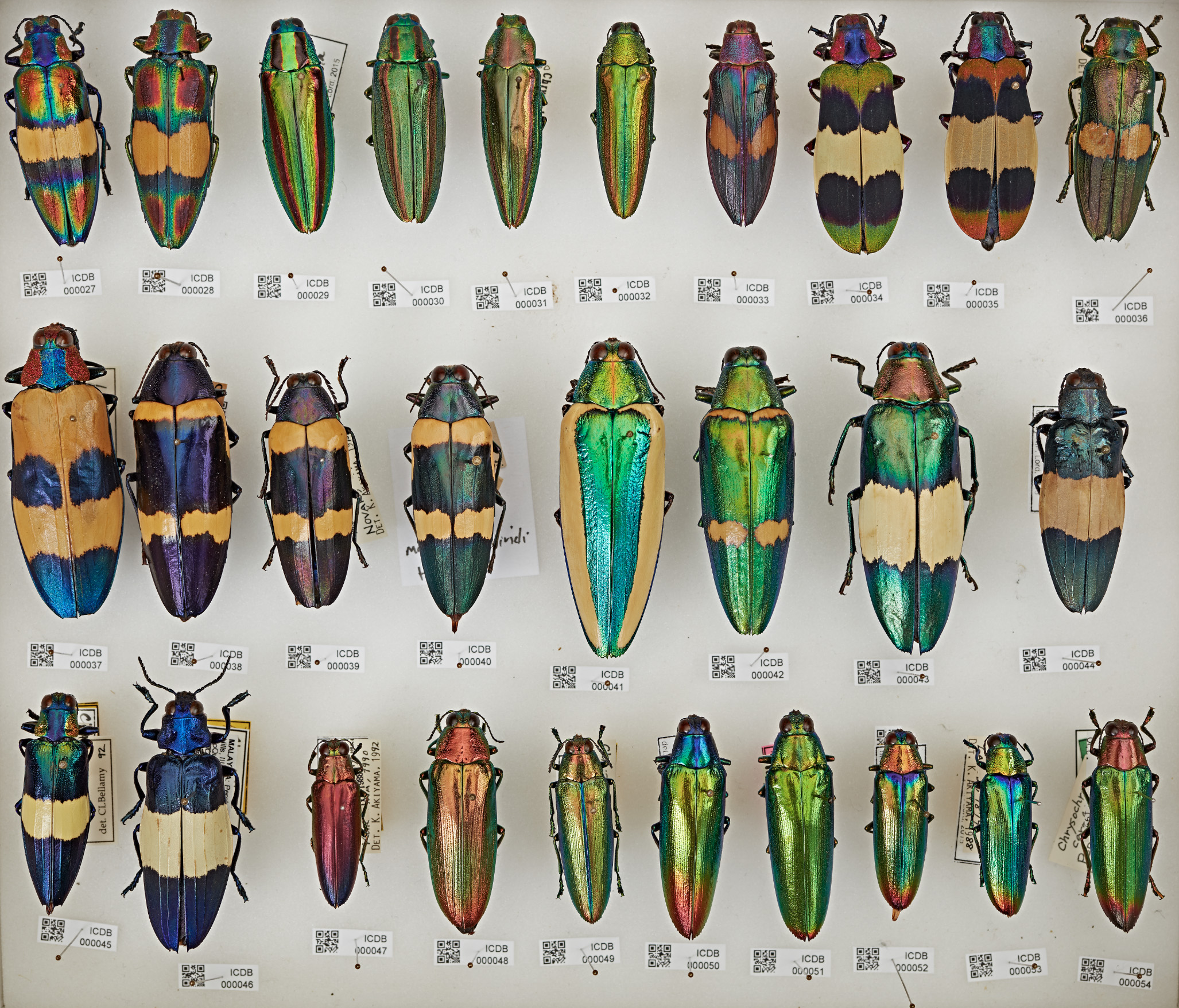 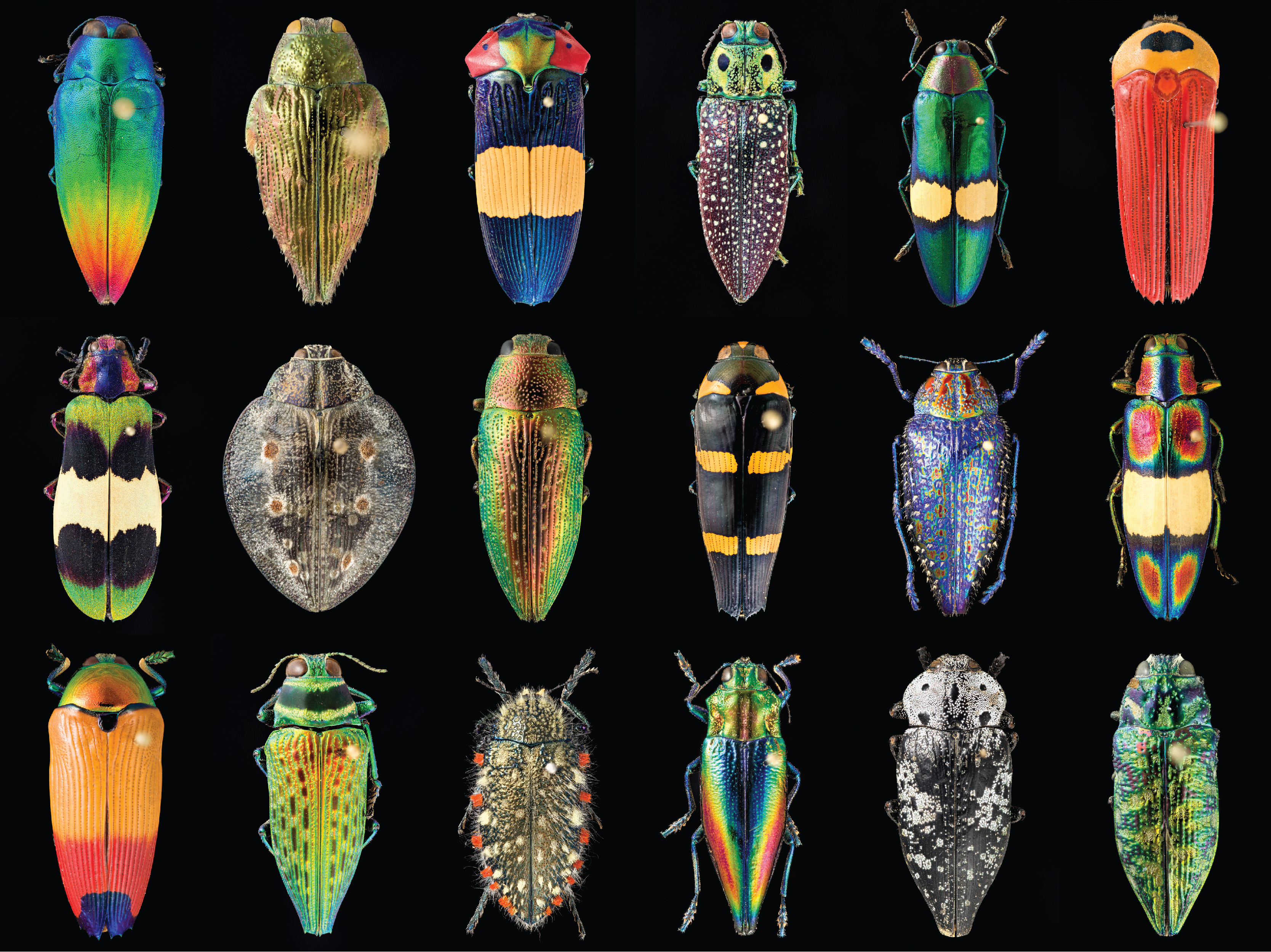 Jewel beetles display a striking diversity of both iridescent and pigmented coloration. Photo by Nathan Lord 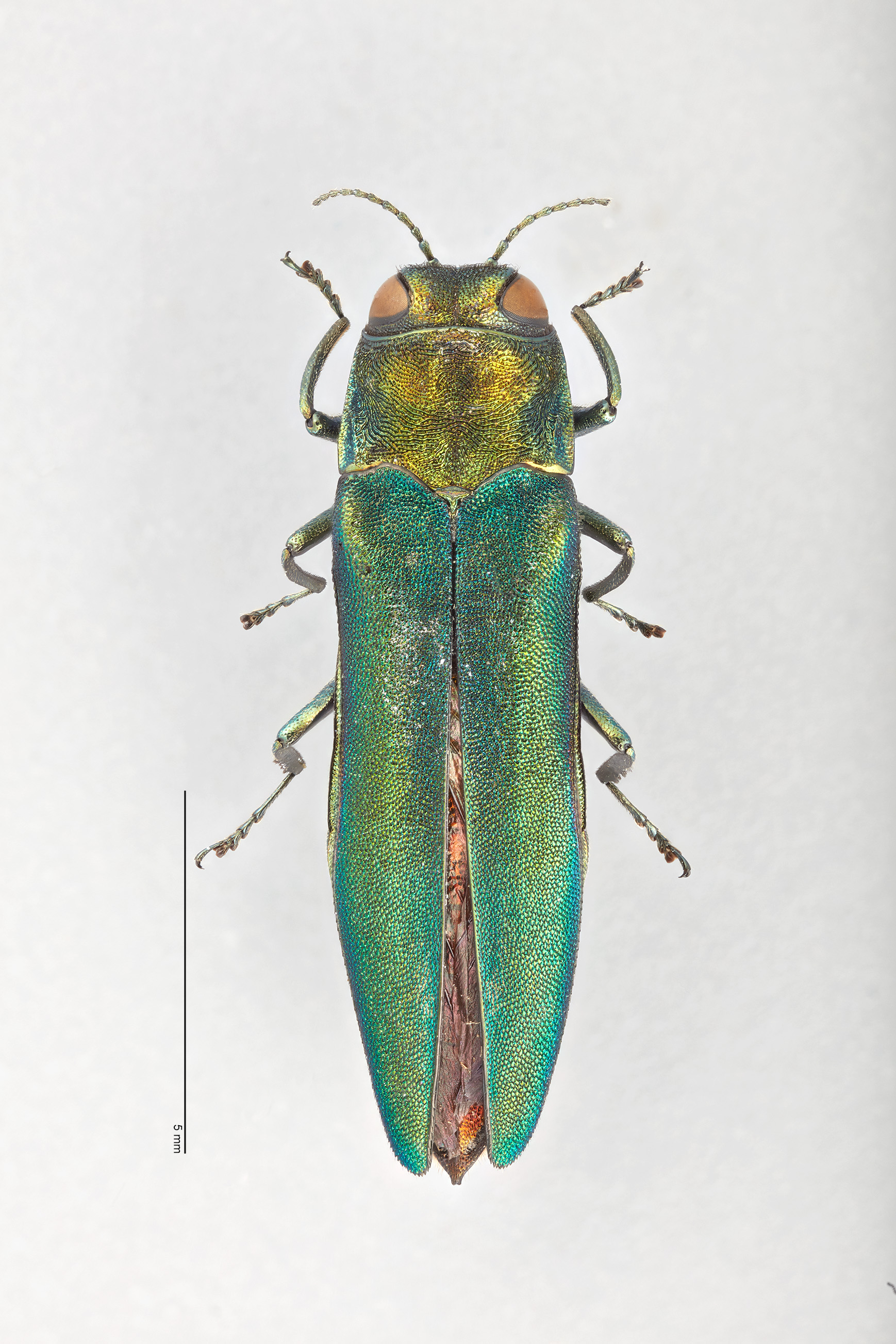 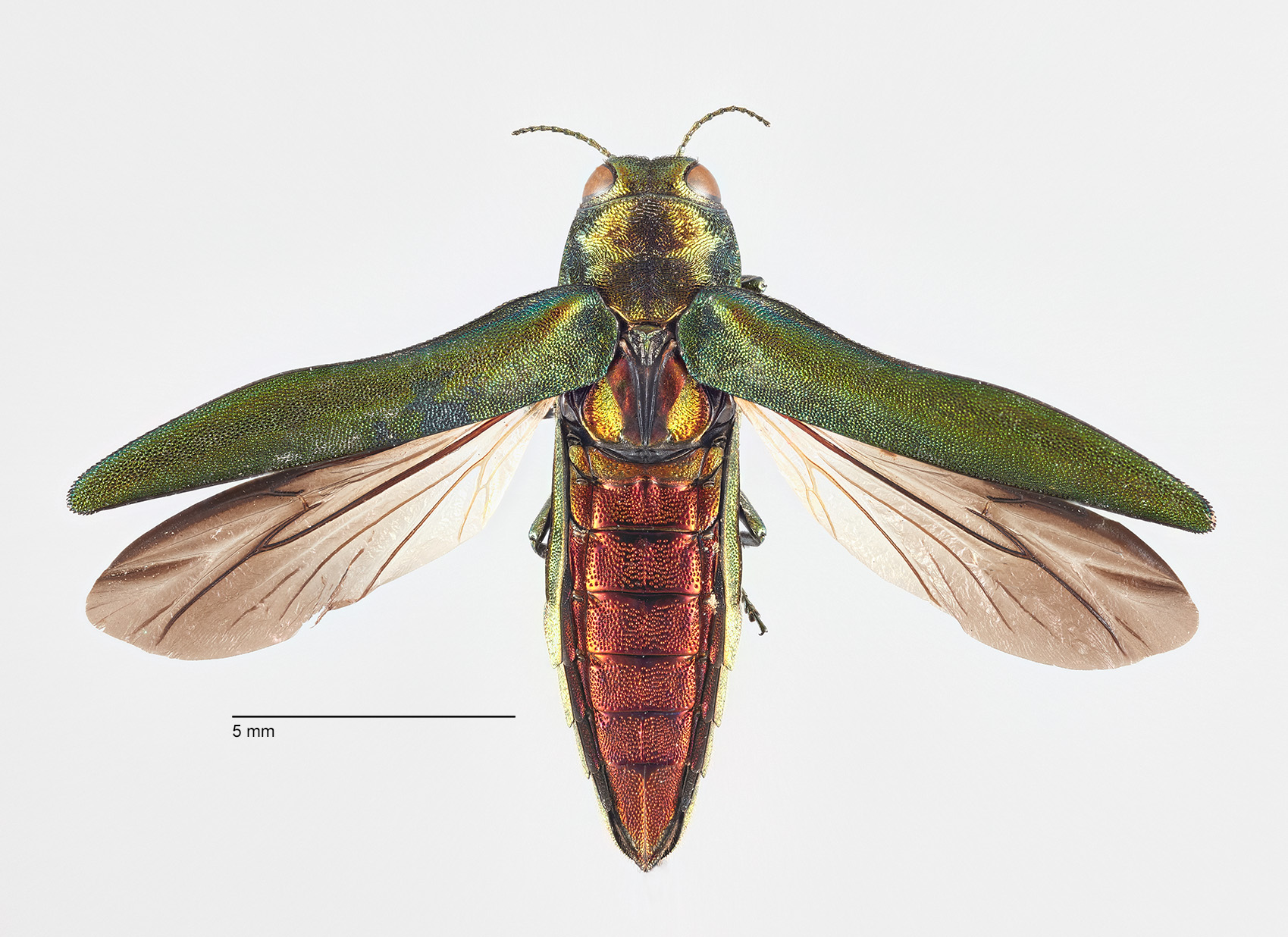