Resistance Development to Bt Crops in Caterpillars: Implications for Pest Management and Cotton/Corn Production in Louisiana

Bt cotton and Bt corn have been widely planted in Louisiana for more than two decades to manage major caterpillar pests of the two crops. Bt derives its name from the naturally occurring soil bacterium Bacillus thuringiensis that has been introduced into the genes of Bt crops. The bacterium produces crystalline (Cry) and vegetative (Vip) insecticidal proteins that, once ingested by target insects, are activated in the midgut and become toxic. In Louisiana, the primary target caterpillars of Bt cotton are the tobacco budworm and bollworm. Several other species, including the beet armyworm, fall armyworm and soybean loopers, are secondary pests of cotton. For Bt corn, a complex of stalk borers — including the sugarcane borer, southwestern corn borer and European corn borer — are its primary targets, while the corn earworm (same species as bollworm) and fall armyworm are considered secondary pests.

Since the introduction of Bt cotton and Bt corn several years ago, tobacco budworm and the stalk borer complex have been maintained below their economic injury levels on Bt and non-Bt plants in Louisiana without the application of chemical insecticides. In addition, both tobacco budworm and stalk borers have remained susceptible to the Bt proteins, and no signs of resistance development have been observed. Louisiana growers have recognized considerable economic and ecological benefits from the long-term use of Bt cotton and Bt corn. Louisiana cotton growers are obtaining an economic advantage of nearly $45 per acre over conventional cotton. Currently, the U.S Cotton Belt has the lowest recorded number of insecticide applications since the 1940s. The estimated net economic return for Louisiana corn growers is more than $20 million annually. The benefit from planting Bt corn could be much greater if the benefits gained from the reduced stalk and stem borer populations on sorghum and rice are included.

The benefits mentioned above will disappear, however, if the Bt crop technology is not used wisely. Just as with the use of chemical insecticides, insects can develop resistance to Bt crops. To ensure the sustainable use of the Bt technology, LSU AgCenter scientists have developed and implemented a statewide Bt resistance monitoring program. Each year, sentinel plots are planted at several locations across the state, and insect survival and plant damage are inspected to watch for any unexpected field control problems. In addition, insect populations collected from different geographical locations are assayed to determine if Bt sensitivities decrease in the field populations.

Recently, the monitoring program has documented that bollworm and corn earworm resistance has widely occurred to both Cry1/Cry2 cotton and Cry1/Cry2 corn across the state. In the current Bt crop market, there are three Bt cotton varieties containing the Cry1/Cry2 genes: Bollgard II, WideStrike and Twinlink, while these two Bt proteins are expressed in several Bt corn varieties including Genuity VT Double Pro, VT Triple Pro, SmartStax and Interasect. As mentioned above, the corn earworm is a secondary pest of field corn. Studies have shown that this caterpillar usually does not cause significant economic losses on field corn in the U.S. Midsouth. However, the resistance to Bt cotton has already threatened the cotton industries of the entire U.S. Cotton Belt.

Since the first use of Bt crops in 1996, the U.S. has adopted a strategy called the “high-dose refuge” approach to counteract the resistance development. With this approach, farmers plant only a portion of the crop acreage on each farm to high-dose Bt plants. High dose refers to the amount of Bt toxin present in plants that can kill target pests that are susceptible or that are resistant heterozygous individuals that carry only one resistance gene. The remaining portion of the crop acreage is planted with non-Bt plants that serve as a refuge for susceptible insects. The susceptible populations from the refuge are expected to mate with the resistant homozygous individuals. In this way, most of their offspring will be heterozygous. Because heterozygous individuals will be killed by the high-dose Bt plants, the rates of resistance should be held at low levels in the pest populations for a long time.

For Bt corn growers in the South where cotton is also planted, the high-dose refuge strategy requires the growers plant on each farm a “structured” refuge of 50% of the acreage for single-gene Bt corn or 20% of the acreage for pyramided Bt corn. Pyramided Bt corn has multiple Bt traits that attack the same pest. The non-Bt structured refuge should be planted in strips or blocks within 800 feet of the Bt corn plants in a layout similar to what is shown in Figure 1. Studies have shown that growers’ compliance with the refuge requirement is a key factor for the success of the high-dose refuge strategy. Several surveys by the Environmental Protection Agency and biotechnology companies have shown that grower compliance with the refuge planting requirement has been very low in the South. Thus, great efforts are needed to improve compliance with the requirement in Louisiana.

Another approach for managing Bt resistance in the U.S. is “gene pyramiding,” which introduces two or more Bt genes with different modes of action into a plant to control the same insect pest. One example of gene pyramiding is Bollgard II cotton, which contains Cry1Ac and Cry2Ab Bt genes that control caterpillar pests such as tobacco budworm and bollworm. The principle of gene pyramiding is quite simple: If individuals in an insect population carrying resistance genetics to one Bt protein are rare, individuals possessing resistance genes simultaneously to two or more Bt proteins must be very rare, so resistance development can be greatly delayed.

Recently, biotechnology companies have introduced a novel Bt gene, Vip3A, to control the Cry1/Cry2-resistant bollworm and corn earworm. The newly introduced Vip3A protein has a distinct gene structure and a new mode of action compared to any known Cry proteins. Studies at the AgCenter have shown no cross-resistance between Vip3A and any Cry proteins. Field trials in Louisiana have demonstrated that all Bt cotton varieties and Bt corn hybrids containing Vip3A gene are effective in controlling the Cry1/Cry2-resistant bollworm and corn earworm. However, because of the limited modes of action used in the Bt crops, the Vip3A protein is the only active protein against the Cry1/Cry2-resistant bollworm and corn earworm in the current Bt market. Thus, preservation of Vip3A susceptibility in pest populations is critical for the long-term success of the Bt crops.

Based on the information available, at least two necessary activities can prolong the Vip3A susceptibility in Louisiana: 1) planting crop varieties containing Vip3A only for Bt cotton and avoiding the use of corn hybrids possessing the Vip3A gene to reduce the selection pressure; and 2) complying with the refuge requirement when planting Bt corn to provide sufficient numbers of susceptible insects to dilute the resistance genes in the pest populations. In addition, biotechnology companies are actively working to develop future pyramided technology that contains two new modes of action and plan to commercialize this technology in the near future. Perhaps the most important way to ensure the sustainability of Bt crops is to treat the technology as only one of the integrated pest management tools and use more approaches to diversify the insect mortality.

This research was partially funded by Louisiana Soybean and Feed Grain Promotion Board.

Sebe Brown is an assistant professor of entomology and extension specialist for cotton, corn, soybeans and grain sorghum insect pest management, and Fangneng Huang is a professor in the Department of Entomology. 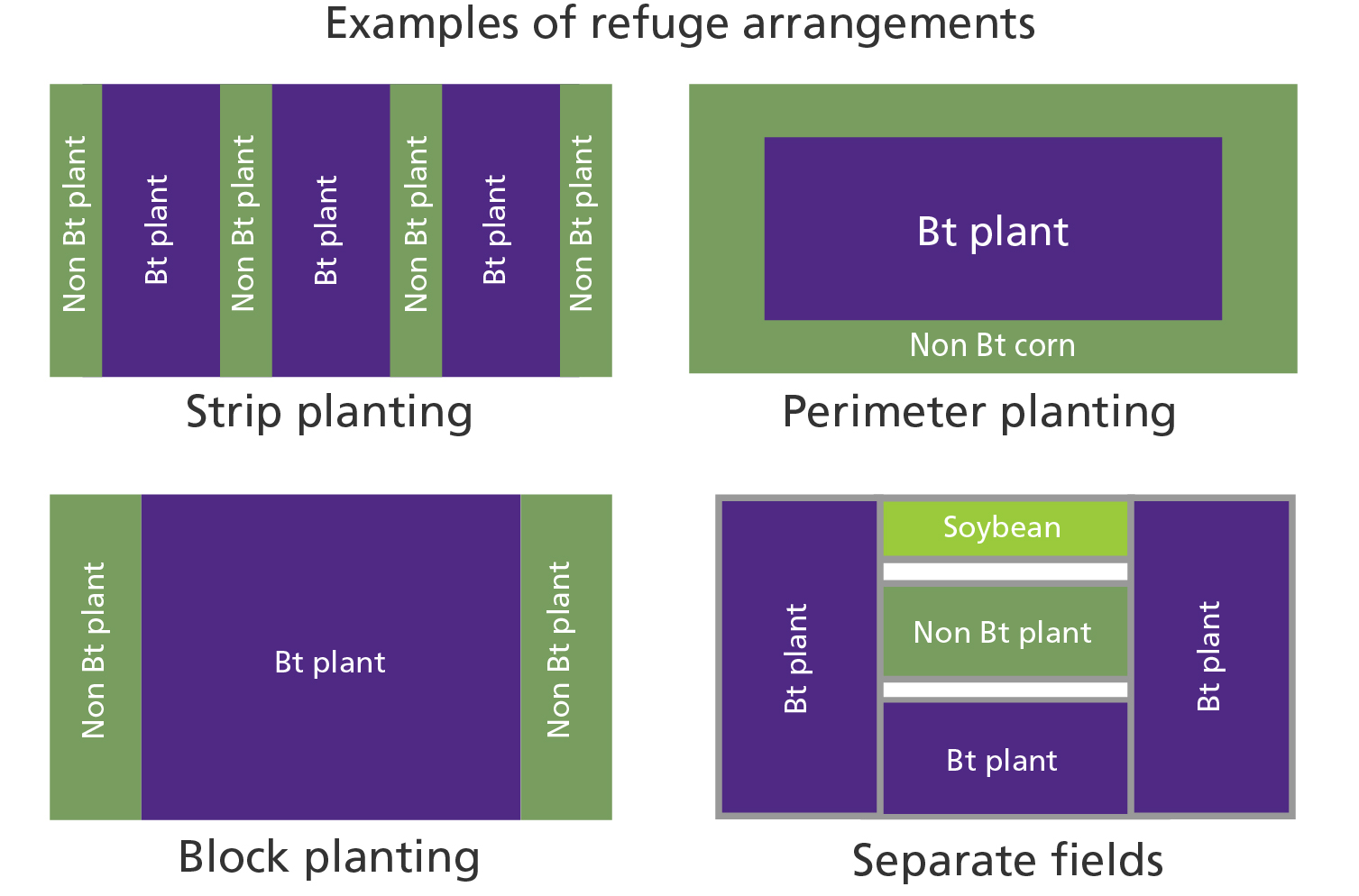