Research on Hurricane-Ravaged Forest Does Not Support an Insect ‘Apocalypse’

A paper published in 2018 claimed that the abundance of spiders, mites and other arthropods in a Puerto Rico forest site had declined 60%, resulting in a collapse of the food web. This sensational claim generated much media attention and, along with documented declines in arthropod abundances in Europe, suggested a global insect “apocalypse.” However, a review of the site in Puerto Rico has led LSU AgCenter researchers to find this analysis was faulty.

Long-term research provides scientists an opportunity to study changes over time in the structure and function of a forest and in response to disturbances. At the Luquillo Experimental Forest in Puerto Rico, a forest frequently disturbed by hurricanes and droughts, AgCenter entomologists have been studying the numbers of insects, spiders, mites and other arthropods living in the crowns of trees that compose the forest canopy. This forest, which is administered by the U.S. Forest Service and the University of Puerto Rico, is the only tropical rainforest in the National Science Foundation Long-Term Ecological Research Network, creating an uncommon opportunity for research.

Researchers have sampled arthropods associated with common tree species in the Luquillo forest in plots established after Hurricane Hugo over a 29-year period from 1991 to 2019. Three tree species were sampled in all the plots to represent dominant early successional tree species, which are the first trees to grow in a forest after a disturbance, such as a clear cutting or hurricane wind damage. These species in the Luquillo forest were Cecropia schreberiana, a tall, thin umbrella-shaped tree known as the pumpwood tree; the evergreen Miconia prasina, a small tree that grows small white flowers; and the evergreen palm tree Prestoea acuminata.

Three other species were sampled to represent late successional tree species, the shade-tolerant trees that thrive in a more established forest. The late successional tree species were the tabonuco or candlewood tree (Dacryodes excelsa), a large evergreen tree that is dominant in the overstory of the forest; the ausubo or balata tree (Manilkara bidentata), which can live for hundreds of years and is an important timber tree in Puerto Rico; and the motillio tree (Sloanea berteriana), an evergreen tree often used for fenceposts and building structures.

Researchers collected the samples by branch bagging, using a long-handled insect net with a closeable plastic bag to reach the canopy and enclose a tree branch and the arthropods on the branch (Figure 1). The arthropods collected this way include those most closely associated with the sampled tree species.

In September 2017, the Category 5 Hurricane Maria became the most intense hurricane to hit Puerto Rico in nearly a century. Severe winds uprooted and broke trees and opened most of the canopy in the forest (Figure 2). Studies of arthropods living in the forest canopy allowed researchers to compare the abundance of the animals from 2015 to 2017 before the hurricane disturbed the forest and in 2018 and 2019 after the disturbance. The abundance of individual species and the richness, or number of different species, decreased significantly on the palm, P. acuminata, following Maria (Figure 3). However, there were no significant changes in abundance or diversity on other tree species.

Furthermore, the nearly 30-year database for this site allows researchers to evaluate changes in arthropod abundances over this time period. The study from 2018 claiming that arthropods’ abundance had declined 60%, resulting in collapse of the food web, used open access data from this forest site, but the study used faulty analyses. The claim of arthropod decline was incorrect for this site. The cumulative abundance of arthropods, analyzed correctly, shows that their abundance in 2019 was equal to or greater than that in 1991. Furthermore, the pattern in abundance shows peaks in 1991, 2002 and 2019, representing immediate responses to major hurricanes Hugo, Georges and Maria, respectively. Peaks in abundance reflect increased abundance of arthropods in response to the altered habitat and availability of resources following hurricanes.

AgCenter researchers analyzed changes in abundance for the 10 most common arthropods for 1991 to 2001 and 2009 to 2019. Six were common during both periods. However, two scale insects (Vinsonia stellifera and Protopulvinaria pyriformis), along with argiopid spiders and salticid spiders — primarily Lyssomanes portoricensis — were among the 10 most abundant from 1991 to 2001 but were replaced from 2009 to 2019 by mealybugs, galumnid (pterymorph oribatid) mites, micromoths and cockroaches, primarily Cariblattoides guava.

Most animals studied did not change significantly in abundance over the 29-year period. Of the five that changed significantly, tree crickets (C. gundlachi) and mealybugs increased, while one of the scale insects (V. stellifera), argiopid spiders, and salticid spiders decreased in abundance. These results demonstrate that species respond differently to the conditions created by disturbances, resulting in species turnover. In general, sap-sucking arthropods increased in abundance with the availability of young foliage immediately following hurricanes. Defoliators and predators initially declined but subsequently increased during community recovery.

The results from this long-term study indicate that the canopy arthropods are not declining in the Luquillo forest. Their numbers are primarily driven by disturbances. However, insect declines may be occurring in other regions, primarily as a result of habitat loss and other environmental changes. More long-term research using consistent sampling techniques at the same sites will help to answer questions about trends in arthropod abundances over time.

Manoj Pandey is a doctoral candidate, and Timothy Schowalter is a professor emeritus in the Department of Entomology.

Figure 1. Branch bagging, using a long-handled insect collecting net with closeable plastic bag and a drawstring. The bag is slipped over a tree branch and enclosed by pulling the string, and the branch clipped to collect the foliage and associated arthropods.

Figure 3. Canopy arthropod abundance on Prestoea acuminata palm trees before and after Hurricane Maria. Abundance was computed as cumulative abundance of all arthropods collected from P. acuminata.

Figure 4. Mean abundance of Psocoptera (bark lice) on Manilkara bidentata trees before and after hurricane Maria. 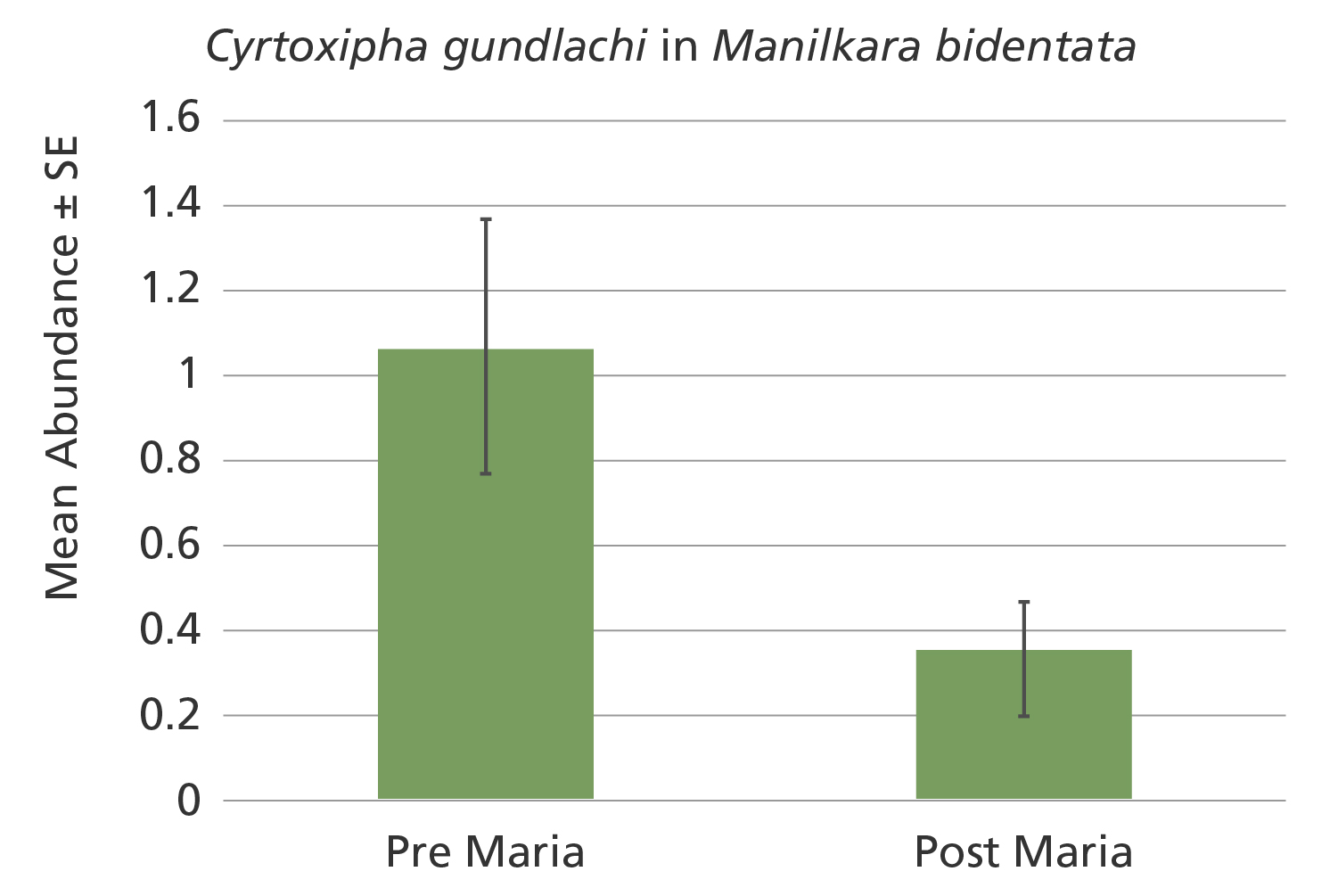