Specialty Crop Plant Diseases on the Rise in Louisiana

Louisiana’s long growing season and mild winters allow growers to cultivate a large number of specialty crops, including fruits and nuts, ornamental plants and vegetables. However, Louisiana’s hot and humid weather provides a conducive environment for plant pathogens to quickly establish and spread. As a result, several plant pathogens are threatening a wide variety of the state’s specialty crops. This article summarizes the current status of several new, high-impact plant diseases.

Raj Singh is an associate professor and director of the Plant Diagnostic Center in the Department of Plant Pathology and Crop Physiology.

(This article appears in the winter 2020 issue of Louisiana Agriculture.)

This is an aggressive disease of trees and woody ornamentals. Some important host species include apple, blueberry, citrus, fig, peach, pecan, persimmon, azalea, bald and Leyland cypress, bottlebrush, camellia, crape myrtles, elms, Italian cypress, magnolia, pine, oaks and weeping willow. The disease can be caused by several species of Armillaria. However, A. mellea and A. tabescens are the most commonly associated species with this disease. Both species have been found in Louisiana. The pathogen can survive in decaying stumps and roots in the soil for several years. Armillaria root rot has been detected in almost all parishes in the state. There is no cure for this disease. Once a plant is infected and the fungus is established, little can be done to save it.

This is a fungal disease caused by Colletotrichum theobromicola. Currently, this pathogen is known to cause disease in English, Japanese, Korean and Baby Gem boxwoods. Boxwood dieback has been detected in boxwood liners, which are thought to introduce the disease to new locations. The disease spreads from plant to plant by poor pruning practices and by the dispersal of spores via rain or irrigation water. Recently, the causal agent has been isolated from the roots, suggesting that it may spread through intertwining boxwood roots.

Although environmental conditions suitable for boxwood dieback are not currently known, Louisiana’s hot and humid weather appears extremely conducive for dieback development. The disease has been confirmed in several southeastern parishes and Rapides Parish, which is in the center of the state and where many nurseries specialize in boxwood. Because boxwood dieback is a recently discovered disease, control measures, such as fungicides, are limited. Therefore, landscapers and nursery workers should follow good management practices and create an environment likely to decrease the spread and development of boxwood dieback. Because removing dead and dying twigs from plants infected by the pathogen is not known to control this disease, all symptomatic plants in the landscape should be removed and destroyed. 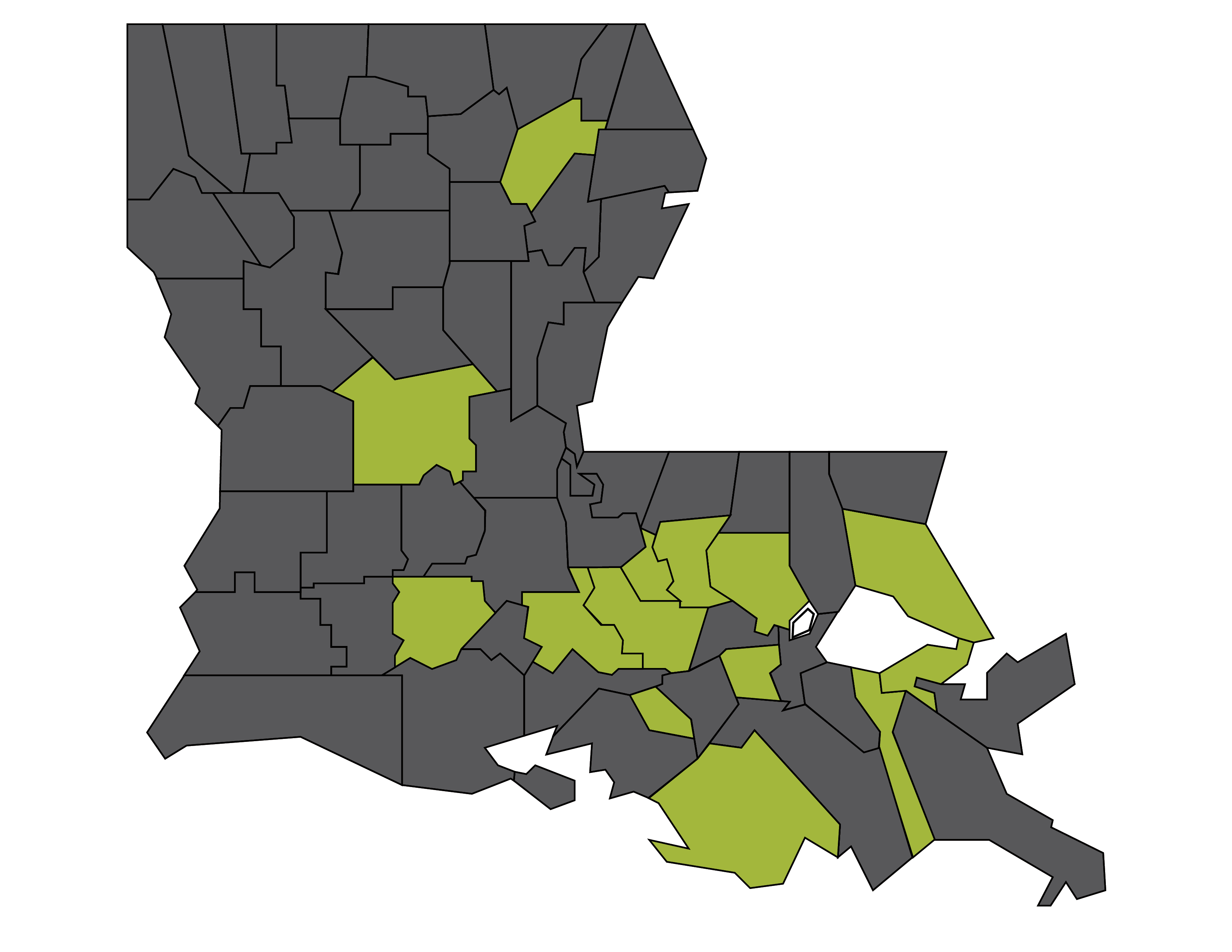 Figure 2a. Current distribution of boxwood dieback in Louisiana.

This bacterial disease, caused by Xanthomonas axonopodis pv. citri, is highly infectious, and lesions appear about 10 to 14 days after infection. Frequent heavy rains facilitate the movement of bacteria from tree to tree, but long-distance dispersal is generally attributed to human movement of infected or exposed citrus material as well as hurricanes and tornadoes. Currently, the parishes of Jefferson, Lafourche, Orleans, Plaquemines, St. Bernard, St. Charles, St. James and St. John the Baptist are quarantined. Recently, citrus canker has been identified from East Baton Rouge and Livingston parishes. Timely application of copper-based fungicides before disease development may suppress the bacterium.

Figure 3a. Current distribution of citrus canker in Louisiana.

Also known as yellow shoot disease or huanglongbing, this bacterial disease is caused by Canididatus Liberibacter asiaticus. The pathogen is transmitted by the Asian citrus psyllid — a sap-sucking insect — or by grafting. All citrus cultivars are susceptible. Citrus greening is a systemic disease, and affected trees may not show symptoms for years. Depending on the citrus cultivar, the symptoms can vary greatly. These parishes are quarantined for citrus greening: Jefferson, Orleans, Plaquemines, St. Bernard and Washington. Parishes quarantined for the Asian citrus psyllid include Jefferson, Orleans, Lafourche, Plaquemines, St. Bernard, St. Charles, St. James, St. Tammany, Tangipahoa and Terrebonne. Manage over-wintering populations of the Asian citrus psyllid with timely application of insecticides labeled for citrus production and use clean plant material to graft citrus trees. 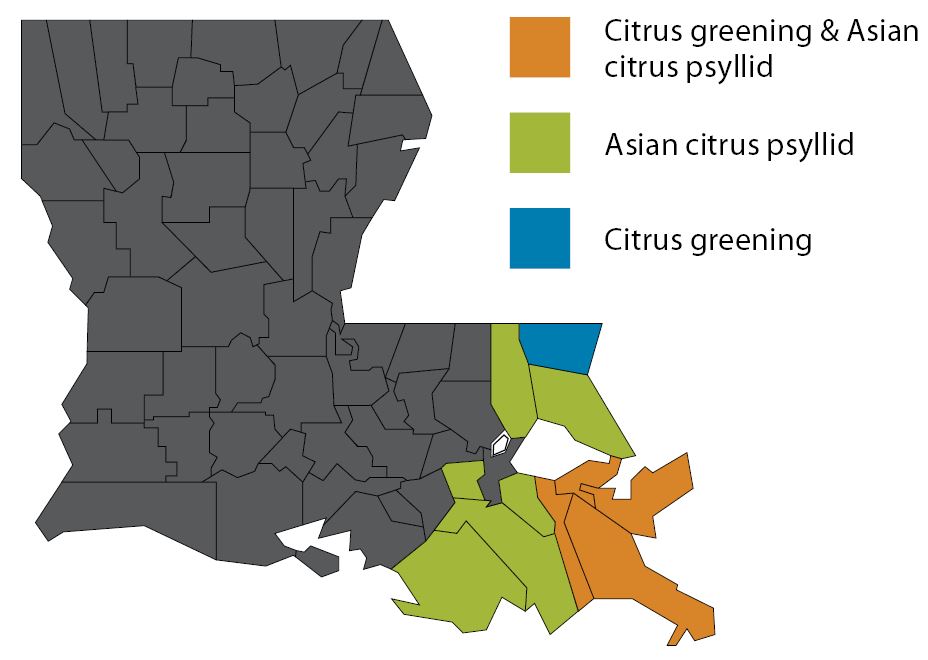 Figure 4a. Current distribution of citrus greening and Asian citrus psyllid in Louisiana.

This devastating disease of trees, in the family Lauraceae, was confirmed from sassafras in Union Parish in the fall of 2014. The disease is caused by the fungus Raffaelea lauricola, which clogs the water-conducting tissue, or xylem, of the tree. As a result, the infected tree wilts and eventually dies. The pathogen is transmitted by the redbay ambrosia beetle Xyleborus glabratus. Trees currently susceptible to laurel wilt include avocado, camphor tree, California laurel, pondberry, pondspice, redbay, sassafras, spicebush and swampbay. Laurel wilt is present in 12 Louisiana parishes. There is no cure for this disease. People must avoid moving infested firewood from areas where laurel wilt and redbay ambrosia beetle are prevalent. 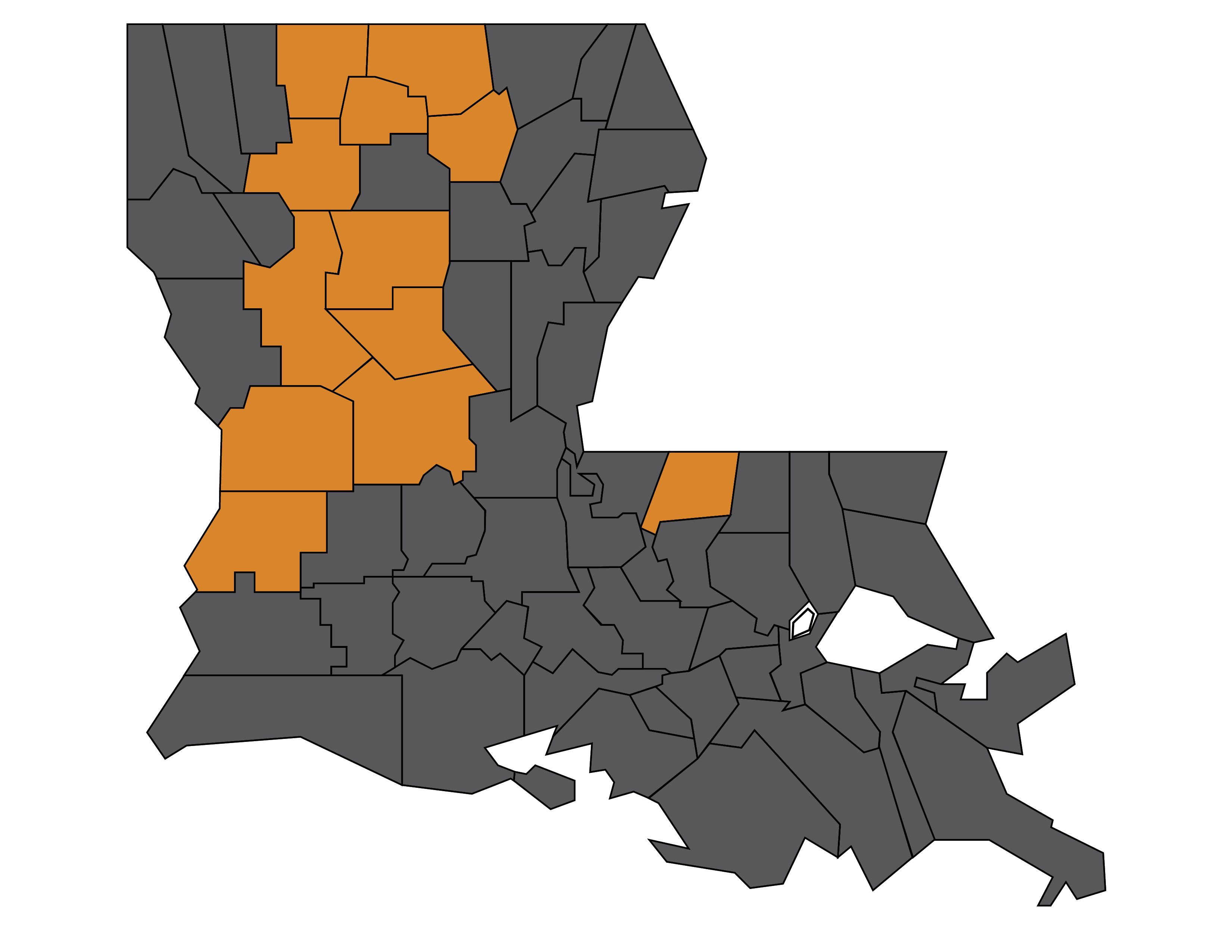 Figure 5a. Current distribution of laurel wilt in Louisiana.

This disease was first discovered in Louisiana in 2015 in Bossier City. Rose rosette is a devastating disease of roses, and all cultivars are susceptible including Knock Out, drift and wild multiflora rose. The disease is caused by the Rose rosette virus and transmitted by a tiny eriophyid mite, Phyllocoptes fructiphilus, or by grafting. During 2018, a major disease outbreak occurred in Shreveport and Bossier City, and all major plantings of roses in the home garden and commercial landscapes were infected. Once roses are infected, there is no cure. Several precautions can be taken to avoid introduction of rose rosette or to reduce its spread from infected to healthy roses. Remove infected roses completely, including roots.

Figure 6a. Current distribution of rose rosette disease in Louisiana.

Two new fatal diseases of palms have been detected in Louisiana — lethal bronzing and lethal yellowing. Lethal bronzing was first detected in 2013 from Pheonix canariensis in Orleans Parish. Later, bronzing was found in Jefferson and St. Bernard parishes. More recently, this disease was detected from Trachcarpus fortunei in East Baton Rouge, Iberia and West Baton Rouge parishes. The disease is caused by a phytoplasma, Candidatus Phytoplasma palmae 16SrIV-D, an unculturable bacterium with no cell wall that is closely related to but genetically distinct from phytoplasma strain 16SrIV-A, which causes lethal yellowing of palms. Lethal yellowing has been detected from East Baton Rouge and Jefferson parishes on T. fortunei and P. sylvestris in 2018 and 2019, respectively. Both lethal bronzing and lethal yellow are terminal diseases, and symptomatic palms that tested positive or palms with dead spear leaf must be removed immediately. Palms that look healthy or asymptomatic near infected palms should be tested to be free of phytoplasmas. 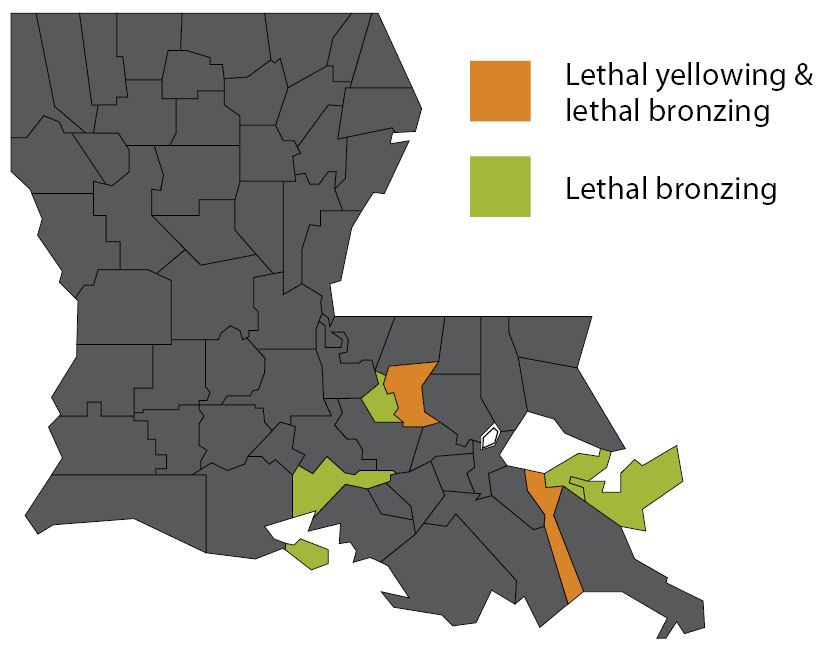