The purpose of this research is to develop an engineering-science-based solution enhancing the movement of oxygen-enriched surface seawater downward into the deeper oxygen-depleted Gulf of Mexico. A vast hypoxic water layer, with no or low dissolved oxygen concentration, develops every summer in the lower water column just above the seabed along the Louisiana-Texas continental shelf. Termed the “dead zone,” it is the second largest such area in the world. Water density stratification, occurring annually along the entire length (260 miles) and width (48 miles) of the shallow (10 feet to 65 feet) shelf in the summer, restricts the vertical oxygen movement and may completely stop the efficient downward movement of atmospheric originating oxygen as illustrated in Figure 1. This oxygen reduction results in fish kills and fleeing fish and shellfish from the bottom layer because of the choked oxygen transport to Gulf of Mexico bottom water.

The current strategy put forth by the Mississippi River/Gulf of Mexico Watershed Nutrient Task Force, which has been in effect since 1997, is to reduce the nutrient load in surface water streams including the Mississippi and Atchafalaya rivers. This task force includes leadership from federal, state and Native American entities, including the EPA, Departments of Agriculture and Interior, the Army Corps of Engineers and the National Tribal Water Council. In addition, a dozen states have members from several of their state agencies.

While this long-term strategy will continue, it is clear that an on-site alternative is needed because nutrient control has not resulted in substantial reduction in the hypoxic zone. Improved water quality helps both the environment and the local economy because fishing and ecotourism activities are vital to Louisiana. Natural processes and human factors influence the health of our fisheries, and LSU researchers are studying these influencing factors, learning ways to better measure changes and assist with recovery following disrupting events. The rather alarming term “dead zone” is appropriate because hypoxic regions exhibit oxygen levels too low to support aquatic organisms, including commercial and recreational species. Being able to increase oxygen availability should alleviate hypoxic effects on fish growth rate, reproduction, mortality and catch for this economically important living resource in addition to improving fisheries revenue.

Mechanical mixing of surface water is an effective oxygen re-aeration technology in common use worldwide, as in using propellers to mix wastewater, which adds oxygen from the air. LSU researchers have demonstrated in laboratory experiments that mechanical mixing of specific layers below the surface but above the bottom is very effective at breaking the density-stratified water layers at depths that restrict rapid oxygen movement. The researchers have simplified a traditional nutrient eutrophication-type theoretical water quality mathematical model to the constant flux model (CFM). The CFM model assumes that the rate of oxygen movement (flux) through the various layers is the same throughout the water column. With the rate fixed, a high resistance zone will result in a large change in oxygen concentration. Likewise, a low resistance zone will display a small change in oxygen concentration passing through. With some field data from LSU and faculty at the Louisiana Universities Marine Consortium in Cocodrie, Louisiana, (LUMCON), the CFM model allows researchers to define oxygen transport from the surface down into the stratified Gulf of Mexico shelf water.

Based on oxygen concentration versus water depth profiles, the model shows the best depth position to place the horizontal rotating impellers, which is the depth at where oxygen vertical downward movement is most restrained — the high resistance zone(s). These oxygen “choke points” are thus located and are now specifically targeted for mixing, which is key to the process.For example, researchers used the model results to predict downward mixing of oxygen-rich Gulf surface water off Terrebonne Bay. The oxygen content was projected to increase from zero to about 1.8 milligrams per liter above the bottom. At all depths in the water column, from surface to seabed, oxygen was predicted to be present and thus hypoxia is considered broken.

LSU researchers will use the results in a future development phase to guide the design of a proposed field test/study site demonstration, if funding permits. Impeller-induced downward flow has been demonstrated in two freshwater lakes, one at Lake Como in Italy and the other Lake Elsinore in California. Breaking hypoxia in the marine water at a location on the Gulf shelf needs to be demonstrated next.

The approach has the flexibility and positioning characteristics to target specific Gulf water locales requiring the need of timely remediation as shown in Figure 2. This approach combines the well-known 20th century propeller mixing re-aeration process, with 21st century emerging alternative power energy technologies, including wind, solar and wave sources. These technologies can provide the source power to a number of individual mixing propellers grouped to target a particular section of the dead zone. Others have successfully mixed stratified zones but input too much energy, disturbing the sediment below the sites. Also, previous work using bubble diffusers at depth were judged to be inadequate. However, a rotation-propeller-based mixing process has shown promise. A direct engineered solution to hypoxia may allow Louisiana to take charge of its coastal resources by increasing fish habitat and wildlife abundance.

(This article appears in the winter 2020 issue of Louisiana Agriculture.) 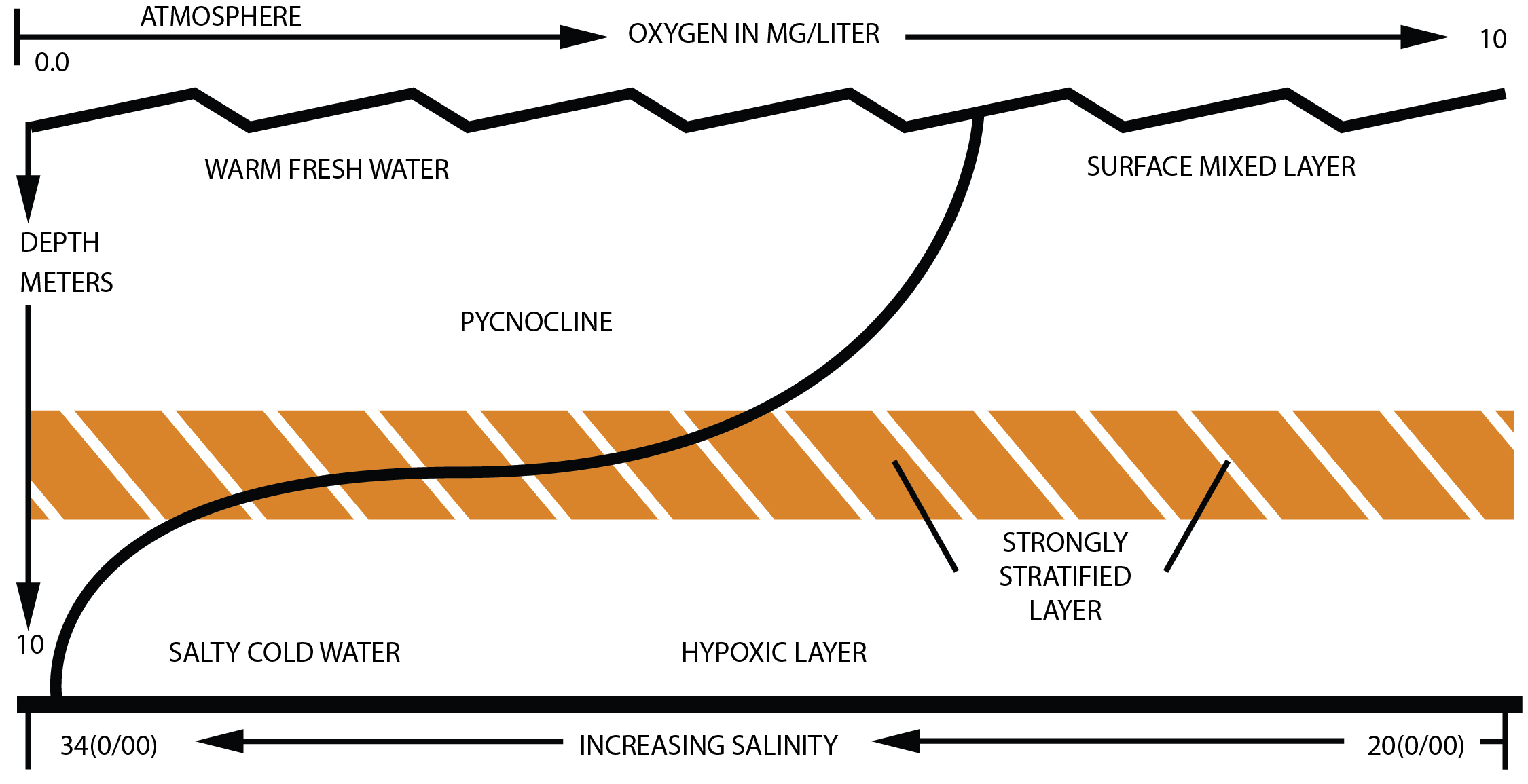 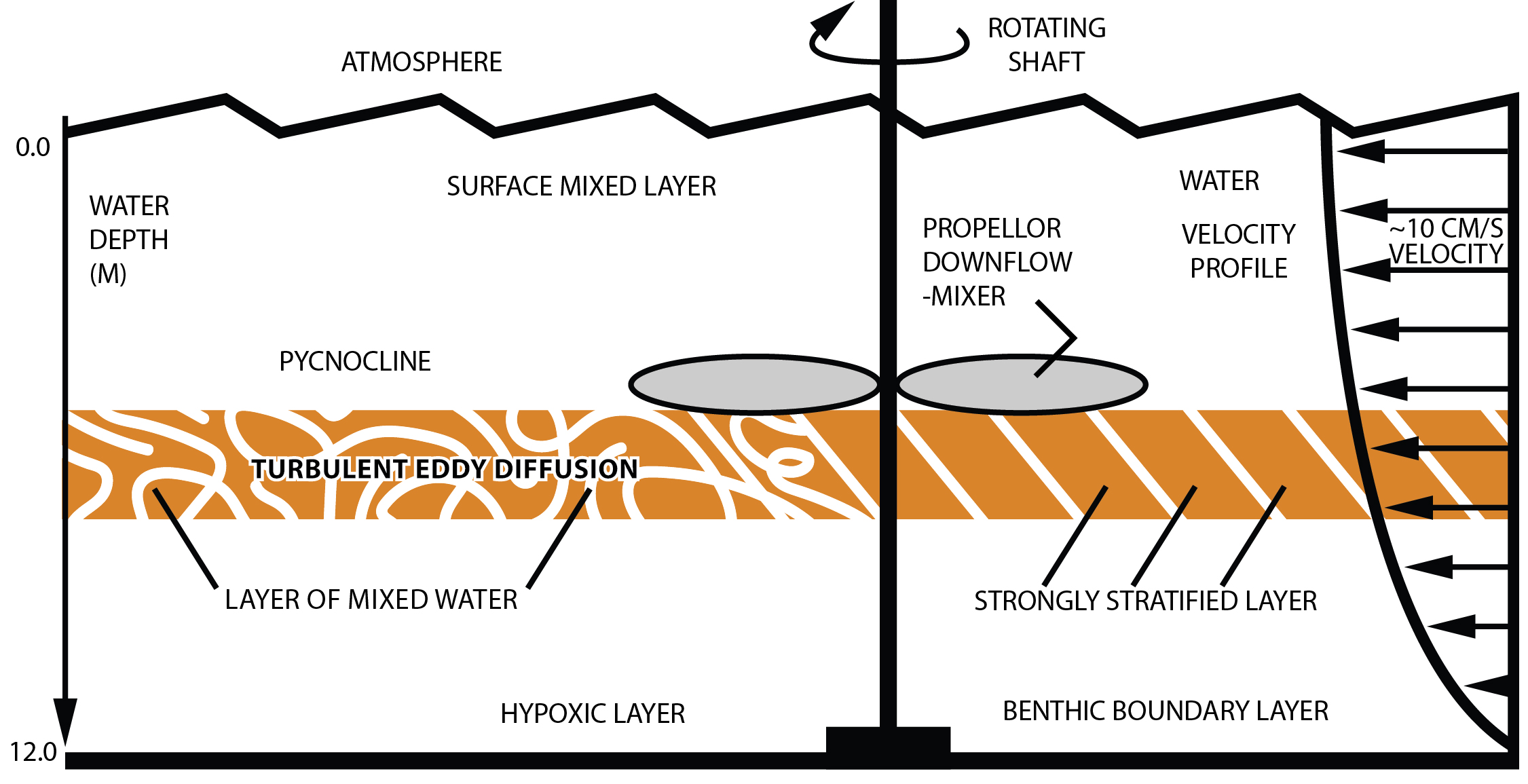