Reproductive Strategies in Insect Societies: Understanding the complexity can lead to better management of pests and beneficials

Colonies constructed by social insects (bees, wasps, ants and termites) resemble human societies in many aspects. The ability of individuals to work together in a social organization and accomplish tasks far exceeding the capabilities of a single individual is one of the most amazing phenomena in nature. Understanding how insect societies thrive and reproduce is a source of inspiration for developing solutions and technologies to benefit human societies, protect beneficial social insects, such as pollinators, and manage pest species.

Social insects posed a special difficulty to Darwin’s theory of natural selection. How could the existence of sterile individuals, such as worker bees, be an evolutionary strategy to “propagate their kind,” as Darwin wrote in “On the Origin of Species” in 1859? Social insect societies are characterized by overlapping generations and a reproductive division of labor. Queens monopolize reproduction, while sterile workers (and soldiers in termites) forage, defend the colony and take care of the young.

Bees, wasps and ants have a special reproductive system called haplo-diploidy. Females hatch from fertilized eggs and carry genetic material of both parents (diploid). Males hatch from unfertilized eggs and only carry their mother’s genes (haploid). This system results in sex-biased relatedness asymmetries. Sisters share three quarters of their genes and are, therefore, more related to each other than to their offspring (Figure 1). Being sterile and raising sisters is a good strategy in haplo-diploid systems to increase fitness by transmitting copies of your genes to the next generation. This concept explains why haplo-diploid insects are predisposed to develop sociality as many, but not all, lineages of bees, wasps and ants did, and why the sterile individuals are female.

Termites do not fit the theory, however, because they are diploid with no relatedness asymmetries, as LSU AgCenter genetic studies confirmed. Nevertheless, all termites are social with a sophisticated and effective division of labor in the colony (Figure 2). Other explanations for termite sociality include the advantages of long-term parental care, division of labor among specialized task forces (for example, workers and soldiers), and enjoying the safety and resources of the parental colony instead of facing risks of dispersal. In addition, termites rely on beneficial microorganisms in worker hindguts to digest plant material. Because workers shed their exoskeleton, including the hindgut lining, every time they grow into the next larval stage, they lose their gut microbes. Social interactions among colony members, including feeding gut fluids containing microbes to newly molted individuals, are vital for the survival of the colony. This dependency on shared gut microbes might explain why termites live in colonies and has been exploited by AgCenter researchers to kill termites via disrupting their gut microbiota with target specific biological toxins and delivery systems.

The life cycle of a social insect colony starts with a mating flight of virgin queens and males. Bees, wasps and ants copulate during the mating flight, and the males die after inseminating the queen. Termite queens and kings, however, mate in a protected nest cavity and form a lifelong partnership. The queen’s ovaries and abdomen become enlarged while she gradually increases her fecundity to lay tens of thousands of eggs per day. Queens have been reported to live for decades. Because termites mate for life, the compatibility of partners is important in terms of physical and genetic resources. This suggests that pairing might involve some degree of mate choice. After the mating flight, males and females drop their wings and engage in “tandem running,” that is, the male follows the female touching her abdomen with his antenna. Studies by AgCenter researchers and others have shown that size, disease, genetic relatedness and/or genetic diversity matter in mate choice depending on species.

Ant, bee and wasp queens are adults at their final stage of development. Termite kings and queens, however, can reproduce as adults or as not yet fully developed immatures. These immature reproductives (Figure 2) are the offspring of the king and queen that originally founded the colony. Immature reproductives supplementing or replacing the founding pair extend the lifespan of the colony. This reproductive flexibility can pose a challenge for areawide termite control because colonies can recover after treatment if reproductives survive or are replaced by their offspring. Therefore, AgCenter researchers routinely use genetic markers as a colony tagging system to monitor changes in the number of reproductives and colonies after termite treatment to ensure complete colony elimination. The ability to replace kings and queens with offspring comes at a price because immature reproductives are siblings and mating among them increases inbreeding. However, termites are remarkably tolerant to inbreeding within colonies, and inbreeding in populations is reduced every year when colonies develop winged individuals that disperse to found new colonies. Inbreeding is circumvented in at least five termite species by replacing the aging queen with clones, so the king mates with genetic copies of the queen instead of his daughters.

There are both cooperation and conflicts in insect societies. While workers cooperatively care for the young produced by the queen, they often retain the potential to produce their own offspring. Worker reproduction leads to decreased workload and increased demand for resources to rear the young in the colony. This conflict, if left unresolved, will disrupt the division of labor and harm the function of social insect colonies. Studying how conflicts are resolved helps scientists understand how insect societies achieve ecological success.

With bees, ants and wasps, workers do not mate but can lay unfertilized male eggs due to haplo-diploidy. In termites, the offspring of queens and kings can differentiate into replacement reproductives. To prevent these individuals from reproducing and keep them as helpers, the social insect colonies often employ two strategies. First, the queen releases a pheromone that inhibits worker fertility. In ants and bees, this pheromone suppresses the development of ovaries in workers; while in termites, the queen pheromone inhibits others from differentiating into reproductives. King pheromones are also expected in termites, but so far the active substances remain mysterious. Studies have indicated that reproductive pheromones in termites are multifaceted because of their complex social system. For example, in the eastern subterranean termite, replacement reproductives produce sex-specific pheromones with both inhibitory and stimulatory functions. These reproductives inhibit workers of the same sex from differentiating into additional reproductives but stimulate workers of the opposite sex to make this transition. If these pheromones are chemically identified, researchers can potentially develop control strategies by manipulating the number of reproductives to disrupt colony performance.

When queen pheromone alone is not sufficient to maintain “reproductive harmony,” a behavior called “policing” is practiced to punish the workers who selfishly lay eggs. In bees, ants and wasps, this behavior can be displayed by the queen (queen policing) or other workers (worker policing). Policing individuals aggressively bite the selfish worker or destroy her eggs, and in some species, this worker may be killed. Such behavior is rare in termites, but AgCenter researchers have found a similar behavior that takes place under certain conditions. After the death of the queen and king in the eastern subterranean termite, their offspring compete for inheriting the breeding position by molting into replacement reproductives. During this process, a new reproductive attacks another reproductive by biting and then produces an alarm signal to recruit workers to cannibalize the injured individual. Investigation of these behaviors and their mechanisms will help us develop a tactic to induce “battles” and cannibalism in termite colonies, thus cause the colonies to collapse.

Pheromone and behavioral strategies altogether regulate reproductive division of labor and promote efficiency of social insect colonies. However, the patterns and mechanisms differ substantially between bees, ants, and wasps and termites, two groups of insects that evolved sociality but with distinct natural histories. Solving the complex puzzles of reproduction in insect societies will help us develop strategies to better protect the beneficial species and manage the pests.

Claudia Husseneder is the Paul K. Adams Professor, and Qian "Karen" Sun is an assistant professor in the Department of Entomology.

Figure 1. Reproductive systems in social insects. The relatedness biases in haplo-diploid insects are considered a favorable but not necessary condition for the development and maintenance of sociality. 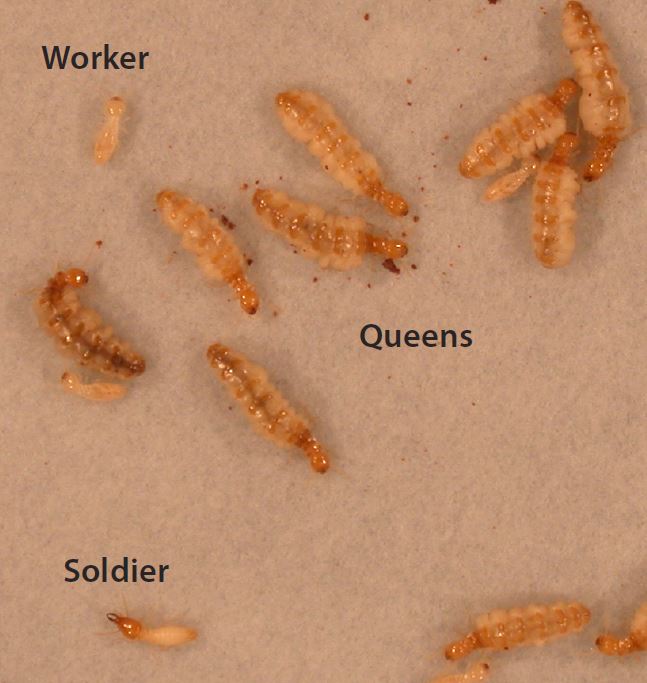