Louisiana’s sugarcane growers and sugar processors use temporary foreign labor, mostly from Mexico, when they are unable to fill positions with U.S. citizens. These workers represent one part of a global network of millions of men and women from lower-income nations seeking temporary work in higher-income nations. The United States and Canada host temporary labor migrants primarily from Mexico and other Central American and Caribbean nations. Wealthier European nations host guest workers from Eastern Europe, Turkey, Africa and Asia. Japan and wealthier Asian nations (South Korea, Singapore, Malaysia and Thailand) host temporary laborers from India, Nepal, Indonesia, Bangladesh, and other poorer Asian nations. In Kuwait, Qatar and the United Arab Emirates, as many as 90 percent of people living and working there are temporary workers from Asia and Africa.

One reason employers may find it difficult to fill temporary positions is that most people desire more stable, permanent jobs. At the same time, guest worker programs can appeal to younger workers from lower-wage nations seeking higher incomes they can use to generate savings or to send a portion of their pay to family members in their native lands. Globally, guest worker programs vary widely in structure, but many offer employment opportunities eight to 10 months each year, and many workers seek to return to the same or similar position for consecutive years with the hopes of saving and investing back home. Employers also value returning workers for their training and experience.

Temporary foreign workers can be distinguished from migrants primarily by their intention to return to live and work in their country of origin. Although all types of migrants send remittances to their families, temporary migrants send a larger proportion of their pay back home because of their long-term intention of returning. Moreover, temporary migrants are less likely to bring family members with them when they go abroad to work. Guest worker programs require workers to secure their positions while still residing in their home country and pay recruitment and travel costs to contract labor organizations. Host countries pursue various policies, such as modifying wages and recruitment costs or instituting caps, to attract more temporary workers or to limit their numbers.

Immigrants and Temporary Workers in the United States

The politics of immigration in the United States has generally focused on the large increase in the unauthorized (illegal) immigrant population, from about 3.5 million in 1990 peaking at around 12 million in 2007 and then declining to the current estimate of about 11 million. Roughly half of all unauthorized immigrants in the United States are Mexican nationals, while the other half come from other nations, but mostly from Central American and a few Asian countries.

Of the 34 million authorized foreign-born individuals living in the United States, about 20 million have become naturalized citizens, 12 million are lawful permanent residents, and 2 million are lawful temporary residents. Of these, about 1.4 million are legal temporary workers under various nonimmigrant visa categories. The other lawful temporary residents are students or spouses and children authorized to stay in the United States. Many lawful temporary workers may be allowed, at some point, to transition to a permanent legal status. For example, some international faculty with the LSU AgCenter were initially awarded a temporary H-1B work visa and later obtained legal permanent residency. International agricultural researchers comprise a large and ever increasing proportion of all agricultural researchers in the United States. Certain categories of visas, however, are strictly for temporary foreign workers who are required to return home after a specified period.

Agricultural producers have been more likely to seek H-2A workers if (1) they have high seasonal variability in labor needs and (2) their labor costs are a high percentage of their total costs. Figure 1 shows the increase in the number of H-2A visas issued in the United States from 1992 to 2016. The trends show a large increase over time, from fewer than 10,000 workers in 1992 to nearly 140,000 in 2016. In 2016, Louisiana ranked sixth in the nation in the number of positions certified (8,301) under the H-2A program. The top three position-certified states were Florida, North Carolina and Georgia. Nationally, the top 10 crops and occupations under the H-2A program include: berries, hay and straw, apples, tobacco, general farm workers, melons, sweet potatoes, lettuce, nursery and greenhouse workers, and corn. Sugarcane ranked 19th nationally (first in Louisiana) with 3,435 positions (2,954 in Louisiana) certified in 2016, according to the Office of Foreign Labor Certification. Louisiana employers also used H-2A labor for crawfish (1,436 positions certified), sweet potatoes (1,033), nursery and greenhouse workers (490), and rice (428). All these crops have high seasonal variability and labor costs.

Table 1 shows farm-level operator and field labor costs for multiple management phases of a Louisiana sugarcane crop. Sugarcane is a perennial crop, planted in early fall. One year of planting can result in up to four ratoon (or stubble) crops produced for raw sugar and molasses. The table shows that sugarcane crops have the highest labor share of costs overall, with the highest shares occurring for hand and mechanical planting activities, followed by harvest and fallow activities. Table 2 shows that crawfish and sweet potatoes also had a relatively high share of labor costs in comparison to other major Louisiana crops.

Figure 2 shows the increase in the number of new visas issued annually in the United States from about 10,000 in 1992 to more than 130,000 in 2007, then sharply declining to 40,000 in 2009 and increasing again over the past eight years to about 85,000 in 2016. This graph does not include some returning workers exempted from the cap, so the total number of positions certified in 2016 reached nearly 120,000. Louisiana employers may use the H-2B temporary guest worker program to hire foreign workers to perform temporary, nonagricultural services or labor on a one-time, seasonal, peak-load or intermittent basis. Unlike the H-2A program, the H-2B program contains a statutory cap on the total number of foreign nationals who may be issued an H-2B visa during a fiscal year. The cap is set at 66,000, with half permitted in the first half of the fiscal year (October to March) and the second half permitted in the remainder of the fiscal year (April to September). Further, Congress had enacted temporary statutes that allowed the number of visas issued to exceed the cap for several years from 2003 to 2008, and then again in 2016 and 2017.

The Louisiana sugar processing industry makes use of the H-2B visa program by providing work for sugar boilers. The temporary nature of sugar processing makes the position of boilers unappealing to domestic workers compared to permanent positions in other industries. Although there are fewer than a dozen sugar mills in the state, the reliance on this visa program to maintain an adequate labor force is paramount in processing sugarcane into raw sugar and molasses.

Although their numbers are much smaller than permanent migrants, temporary foreign workers and guest workers play a significant role in both agriculture and nonagricultural industries in Louisiana, the United States and the world. Experts expect the U.S. immigration debate to continue to focus on permanent migrants, but they also expect continued debate over the temporary foreign worker programs. Sugar mill operators, for example, have expressed particular concerns with the timing of the H-2B program. They prefer to hire workers for grinding operations beginning in September, but because this is the end of the fiscal year and due to H-2B program caps, they may be forced to delay grinding until they can get workers in late October (the next fiscal year). Lawmakers regularly consider revisions to the temporary worker programs. For example, in October 2017, the House Judiciary Committee proposed a new H-2C program to replace both the H-2A and H-2B programs, with updated caps and several new provisions.

More recently, however, the debate over temporary workers in the United States has been subsumed under the larger debates about immigration reform. Similarly, debates about guest worker programs in Europe have taken a back seat to the more pressing issue of refugees from war-torn nations. In Kuwait, Qatar and the United Arab Emirates, global human rights organizations have reported widespread violations of labor rights and human rights of temporary migrant workers, and global organizations have emerged to try to protect migrant workers from abuses. Despite these concerns, most experts see a continuing demand for temporary foreign labor programs.

Michael Deliberto is an assistant professor and Mark Schafer is an associate professor in the Department of Agricultural Economics and Agribusiness.

This article appears in the spring 2018 issue of Louisiana Agriculture.

H-2A and H-2B are provisions within the Immigration and Nationality Act that allow for the lawful admission of nonimmigrant workers to temporarily fill vacant positions within the agricultural and nonagricultural sectors of the U.S. economy. These provisions were made for those industries not able to source sufficient domestic labor for their particular industry needs. While H-2A and H-2B aim to provide for the filling of vacant positions within agriculture and other industries, H-2B differs from H-2A in that the H-2B program statutorily limits the total number of H-2B visas issued during any fiscal year. The H-2A program within Louisiana supplies temporary laborers for the crawfish, sweet potato, nursery, rice and sugarcane industries. The H-2B program within Louisiana supplies temporary laborers for landscaping; meat, fish and poultry processing; and sugar processing industries. 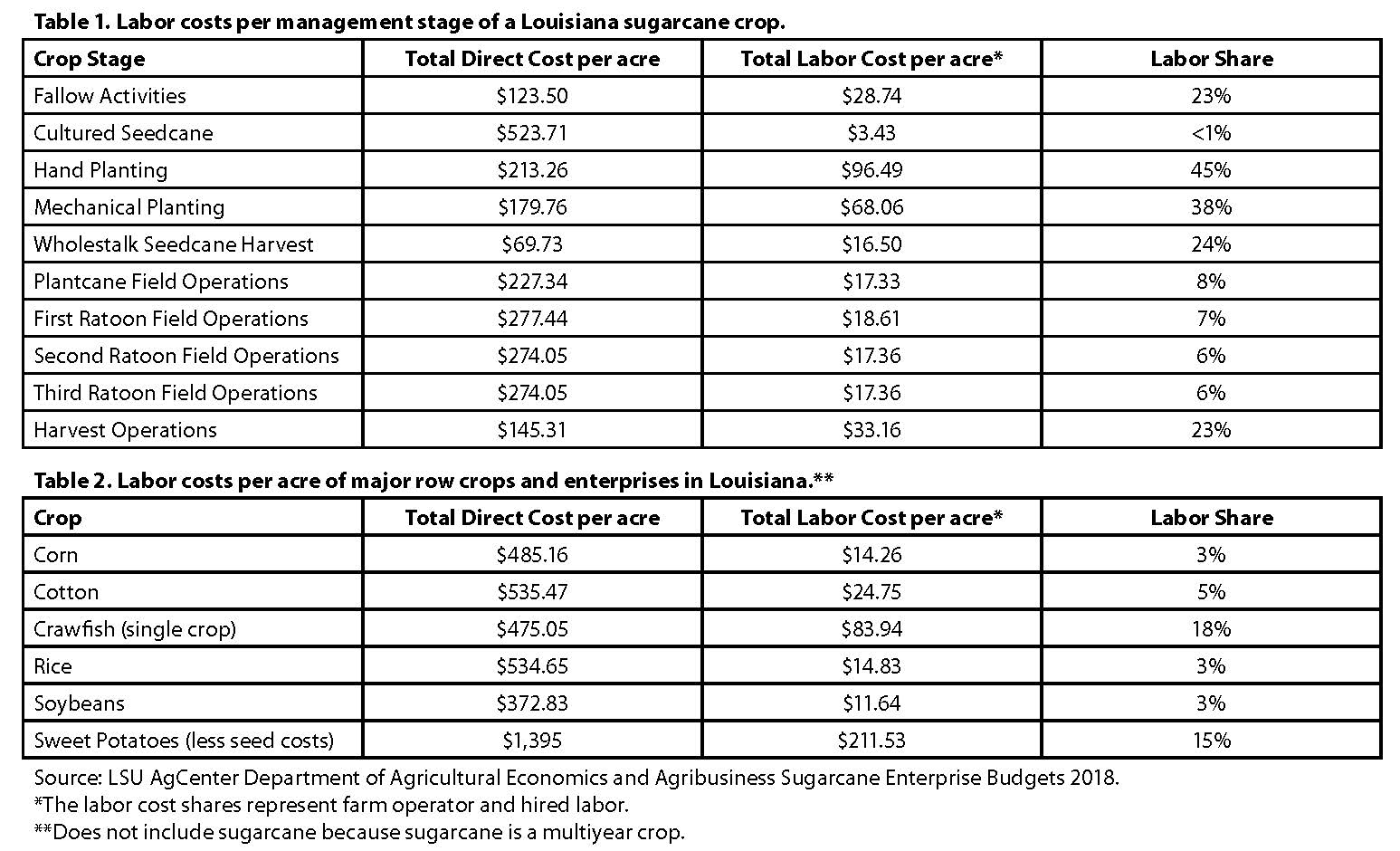