For many people, rice is the principal source of caloric intake, with demand being highest in developing countries. In terms of a global perspective, rice production and consumption are highly concentrated in Asia.

The ability to secure a prominent share of the export market is important for all domestic rice producers because over half of the annual rice crop is destined for the global market. The United States is one of the leading exporters of rice, accounting for around 10 percent of the annual volume of global rice trade. The major U.S. rice-producing states are Arkansas, California and Louisiana, with a smaller share of the domestic grain produced in Texas, Mississippi and Missouri. Programs that address and promote the role of trade are critical to the long-term viability of the industry. Trade agreements, both existing and emerging, in addition to global food assistance shipments, seek to promote and grow the U.S. rice brand in the global marketplace. Examples would include efforts made by trade promotion boards and two public/private marketing tools: the Market Access Program and the U.S. Department of Agriculture Foreign Market Development Programs.

The Western Hemisphere is the largest market for U.S. long-grain rice. Combined medium- and short-grain rice is exported to northeast Asia as part of World Trade Organization (WTO) agreements. Medium-grain rice is also exported to Africa and the Middle East. According to the U.S. Department of Agriculture, Mexico and Central America are regular purchasers of U.S. rough rice.

In 2016, the United States produced more than 7 million metric tons of rice (milled-equivalent), where milled-equivalent refers to rice that has had its husk and bran layers removed. Over the past five years, domestic production of rice has ranged between 6.1 and 7.1 million metric tons. Over the past half-decade, exports are typically more than 3 million metric tons, reaching a high of 3.4 million metric tons in 2016. Top international markets for U.S. rice include: Mexico, Haiti, Central America, Canada, Colombia, Peru, Hong Kong, Japan, South Korea, Taiwan, Turkey, the European Union, Ghana, Jordan and Saudi Arabia. By class, a majority of long-grain rice exports are destined for the Western Hemisphere. Major medium- and short-grain rice export markets include: Canada, the Middle East and northeast Asia (as part of WTO trade commitments).

Although China and India are the two largest rice producers in the world, their respective export share of production can be misleading (Figure 2). Given the sheer size of the rice crop produced and harvested in China and India annually, it must be borne in mind that the rice produced both in China and India is primarily for domestic consumption. Even so, India’s share of the export market is still almost 10 times that of China’s. It is interesting to note that China holds 65 percent of world rice stocks. A possible explanation of this policy is that China is trying to build up its grain reserves. Thailand, Pakistan and the U.S. export approximately half of their domestic production.

Data from the U.S. Census Bureau provide export statistics for goods valued at more than $2,500 per commodity shipped by individuals and organizations from the U.S to other countries. The value of total rice exports (expressed in U.S. dollars) is presented in Figure 3. Mexico, Canada, Japan, Saudi Arabia, Columbia and Venezuela represent the lion’s share of rice exports.

Specific to Louisiana, rice, rough or unprocessed, joins soybeans, soybean oil and corn as being in the list of the top 10 commodity exports. These agricultural exports represent slightly over a 36 percent share of Louisiana’s total 2016 export sales. Data from Figure 4 illustrate the value of Louisiana’s total rice exports. The nations of Mexico, Venezuela and Colombia represent major economic contributors to the state’s export earnings.

Recent policy developments between China and the U.S. include a finalized phytosanitary protocol being signed, which is the removal of a key barrier to exports being sent into China, which has 1.4 billion people. China is the largest producer, consumer and rice importer in the world. A phytosanitary protocol is an agreement where two parties, such as China and the U.S., ensure that in the course of the transmission and transportation of a commodity, that it is in its natural state free from pathogens and any other agents deemed harmful to humans, such as pests.

Another top priority of the rice industry is emphasizing the importance of the North American Free Trade Agreement (NAFTA) to domestic rice producers because Mexico is a major rice-consuming market for the U.S.

Another policy consideration of interest to the rice industry is the possibility of establishing a vibrant rice trade with Cuba. Before the embargo, Cuba was one of the largest markets for U.S. rice.

For Louisiana, it is evident that Mexico, Central America and South America are vital export markets for Louisiana rice. These markets will continue to evolve with increases in demand that come about from increases in population growth; however, this increased demand will evolve at a slower rate due to changes in population dynamics in the Western Hemisphere. Markets must be developed and new demand sourced for Louisiana to maintain the rate of growth in the global rice export market. China remains a potential bright spot and hopeful target of Louisiana rice exports once agreement can be reached regarding Chinese phytosanitary requirements. Possible détente with Cuba may open that nation to Louisiana rice exports and with the highest per capita consumption of rice in the world (at roughly 132 pounds per person per year), it would be welcomed.

Michael Deliberto is an assistant professor; Huizhen “Jane” Niu, an instructor; and Brian Hilbun, a research associate, all in the Department of Agricultural Economics and Agribusiness. 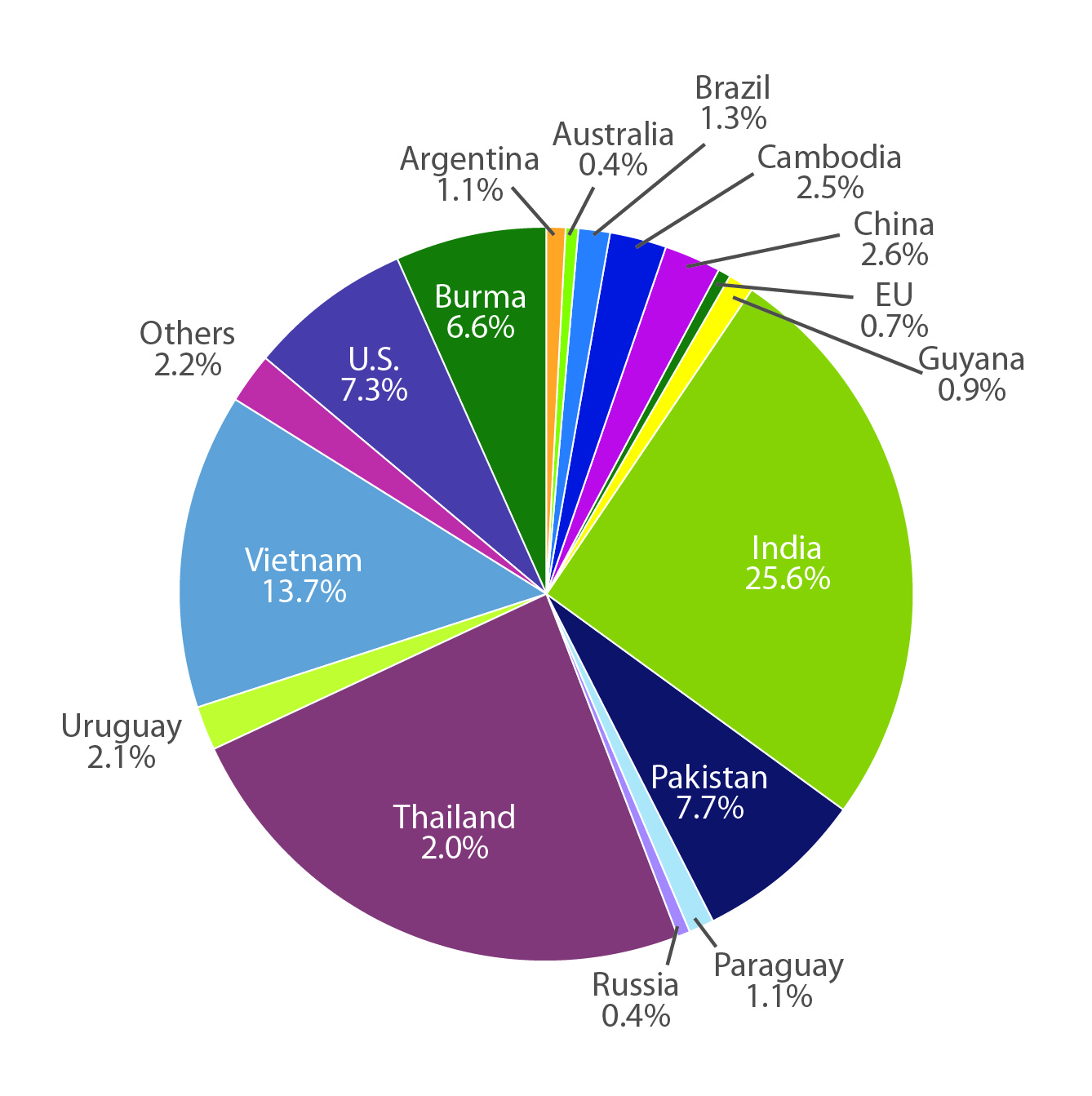 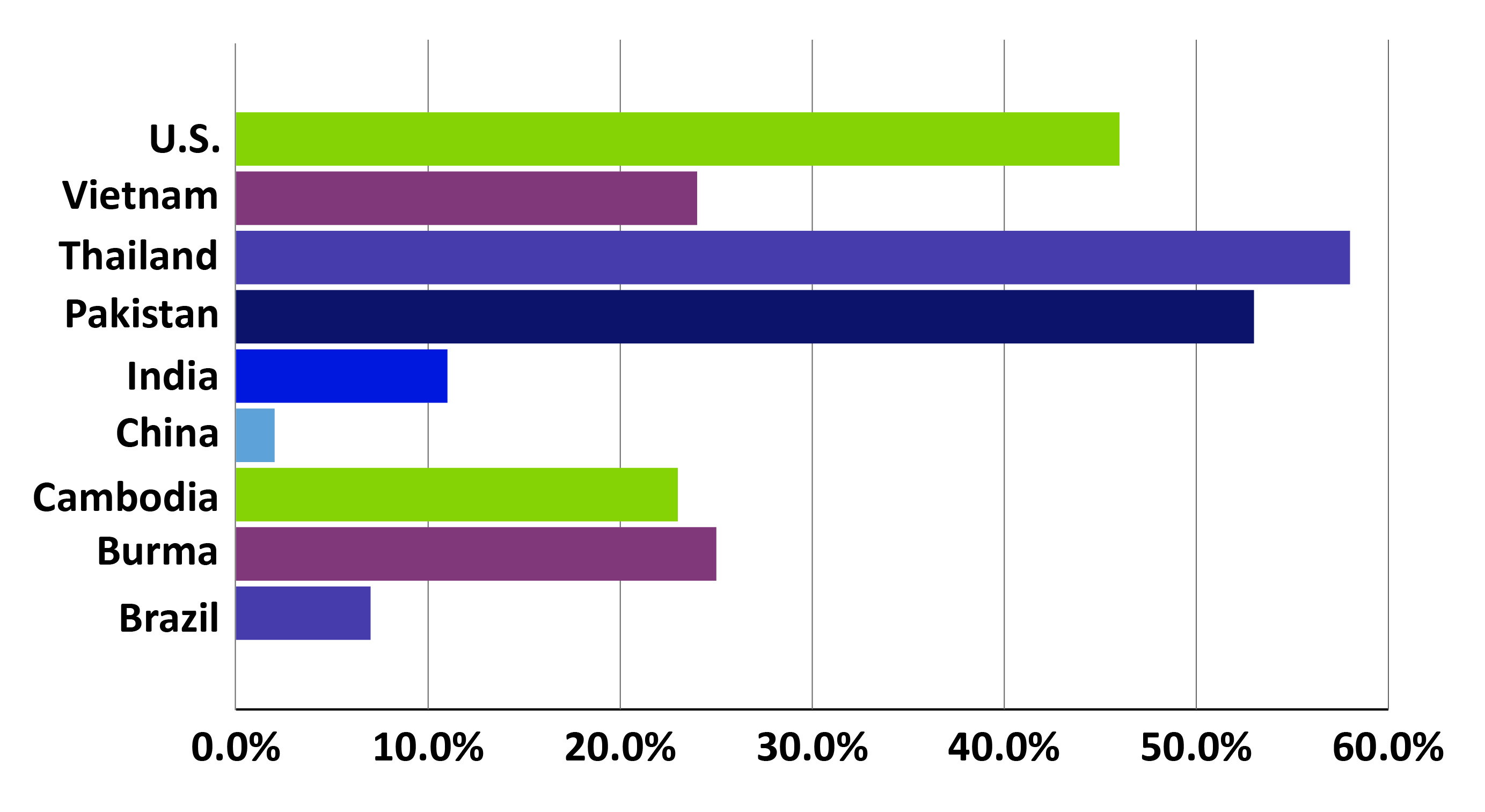 Figure 2. Exports expressed as a percentage of total rice production in 2016-17 in selected countries. 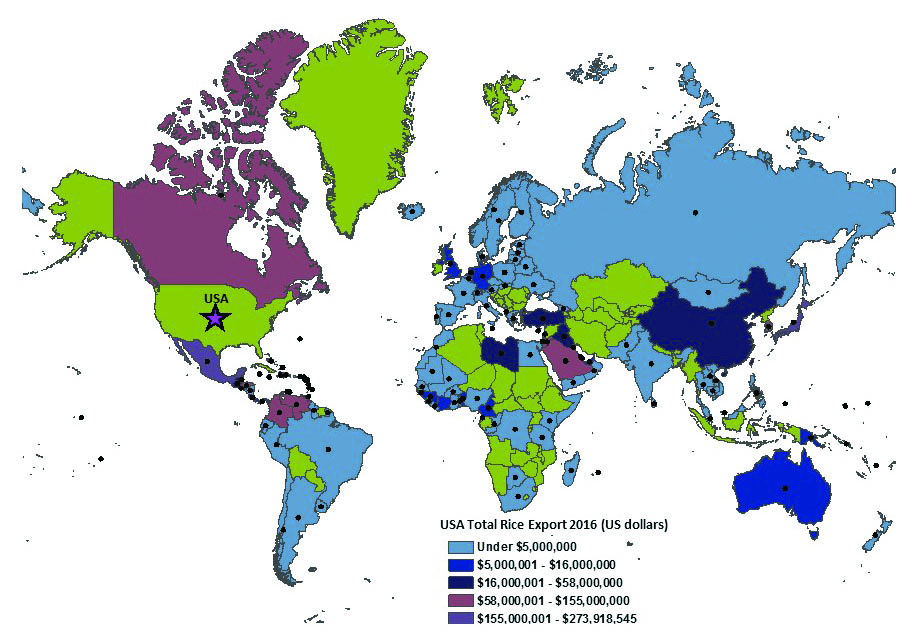 Figure 4. Louisiana total rice exports in U.S. dollars in 2016. Author’s Note: Sales to Hong Kong and Macau appear in the boundary for the People’s Republic of China. This is because Macau and Hong Kong are special administrative regions with their own currency, government and officials. They are not independent countries.