Agricultural Trade and the Ports of South Louisiana

The Mississippi River is a unique resource that enhances the competitiveness of Louisiana and U.S. agriculture. Since the early history of the United States, investment in the infrastructure of both the upper and lower portions of the Mississippi has served to make the river the conduit of trade it is today. Current and future generations must continue to invest in this resource if it is to continue to serve as the primary artery for U.S. agricultural commerce.

The Mississippi River serves as a low-cost option for shipping bulk agricultural commodities from America’s breadbasket to destinations around the world. The southward flow of the Mississippi River makes barge transportation a relatively inexpensive way to transport bulk commodities to export terminals in Louisiana. The U.S. agricultural sector benefits from this efficient river complex and the competitive advantage it provides. This advantage increases as sustainability is included in the mix and as fuel costs rise.

The Mississippi River serves another important purpose because shipping via barge removes trucks from our highways and reduces the number of railcars needed. These realities serve, alternately, to lessen the congestion on our highways and roads and to decrease traffic at rail crossings and on the railroads, thus improving societal welfare. Perhaps more importantly, increased bulk commodity transportation via barge serves to decrease transportation fatalities because fewer trucks are on the road and frequency of railroad crossings is lowered.

These advantages result from the natural existence of the river and have been enhanced by historic and ongoing investment in this complex transportation system. In the case of the Upper Mississippi River system, the steep slope of the river has necessitated the creation of a system of locks and dams stretching from the Twin Cities in Minnesota to St. Louis, Missouri. This infrastructure allows the Upper Mississippi to be navigable by the barges that carry bulk agricultural commodities as well as other commercial products. As the river passes south of St. Louis, the relatively flat grade of the river allows for navigability without the need for locks and dams. Instead of investment in locks and dams, upkeep of the lower portions of the river requires continual investment in dredging and levee maintenance.

The ports of south Louisiana stretch from Myrtle Grove at mile marker 61 northward through New Orleans, the Port of South Louisiana (which includes Convent, St. Elmo, Reserve, Destrehan, Ama and Westwego), Gramercy to Darrow and, finally, the Port of Baton Rouge at mile marker 228. This vast complex of port facilities and grain elevators links the United States with agricultural markets around the world through an intermodal transportation system accessible via truck, rail, barge and ocean-going vessel.

The ports of south Louisiana are of vital importance for the export of U.S. soybeans and corn. The New Orleans Customs District (NOCD) accounts for over half of United States exports of soybeans, corn, rice, soybean oil and soybean meal (Table 1). At the same time, these products comprise the lion’s share of NOCD export volume as corn, soybeans and soybean-derived products account for over 80 percent of agricultural exports going through Louisiana ports. In 2017, soybeans accounted for over half the volume of agricultural exports going through Louisiana.

The current policy environment also plays an important role in determining Louisiana agricultural trade volumes. The U.S. withdrawal from the Trans-Pacific Partnership (TPP) and the announced renegotiation of the North American Free Trade Agreement (NAFTA) create uncertainties with respect to their implications for U.S. agriculture. The U.S. decision to withdraw from the Paris Accord creates uncertainties on the environmental front that will affect U.S. agricultural trade, both with respect to the reaction of countries that are markets for U.S. agricultural products as well as our ability to compete through the elimination or reduction of environmental regulations. While the U.S. treasury secretary has been directed to label China a currency manipulator, the tremendous economic growth in the United States only adds to U.S. purchasing power and exacerbates the Chinese trade surplus with the United States. At the same time, the commerce secretary and the U.S. trade representative have been directed to identify all foreign trading abuses that unfairly affect American workers and use every tool under American and international law to end those abuses immediately, which could potentially result in retaliation. These policy responses all affect the competitiveness of U.S. agriculture in the world market and will influence the volumes of agricultural trade passing through the mouth of the Mississippi River.

Another factor that will influence the future volume of trade passing through Louisiana ports is the recent expansion of the Panama Canal, which has doubled its capacity and allows for the passage of larger ships. This has resulted in the use of a new class of ships, known as New Panamax, or Neopanamax, which can carry over twice the cargo of previous Panamax vessels. These new, larger ships will allow for cargo to be shipped more efficiently and at a lower cost through Louisiana ports. At the same time, they necessitate that port facilities be compatible with these new vessels, requiring increased investment in modernization and maintenance.

Forward-thinking, proactive measures taken by previous generations have created the Mississippi River infrastructure that makes U.S. agricultural exports as competitive on the world market as they are today. Without reinvestment in this resource to maintain its transportation efficiency, the U.S. risks losing this competitive advantage.

P. Lynn Kennedy is the Crescent City Tigers Alumni Professor in the LSU AgCenter Department of Agricultural Economics and Agribusiness.

This article appears in the spring 2018 issue of Louisiana Agriculture. 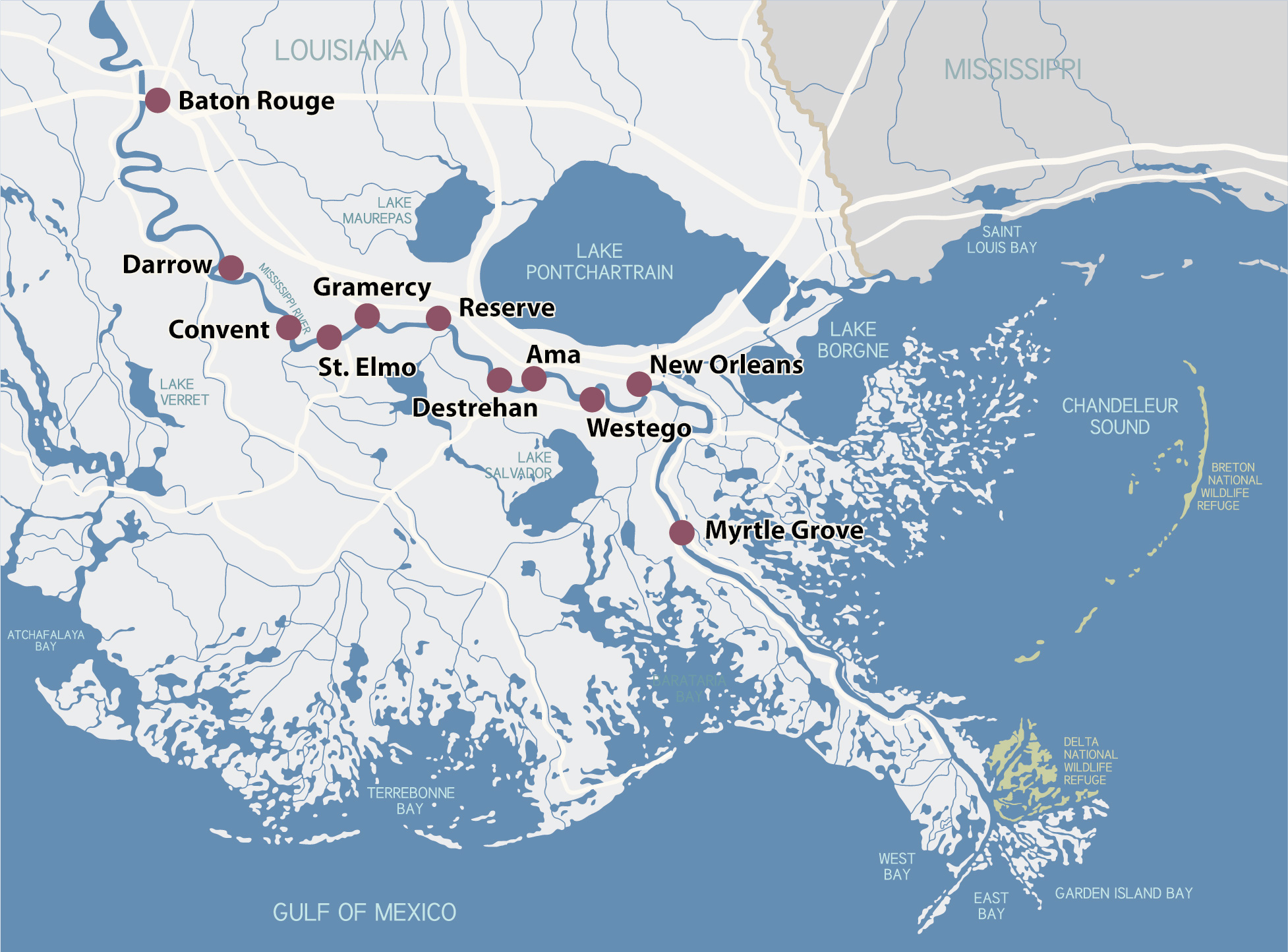 Loading grain at the Port of Baton Rouge. Photo by Bruce Schultz 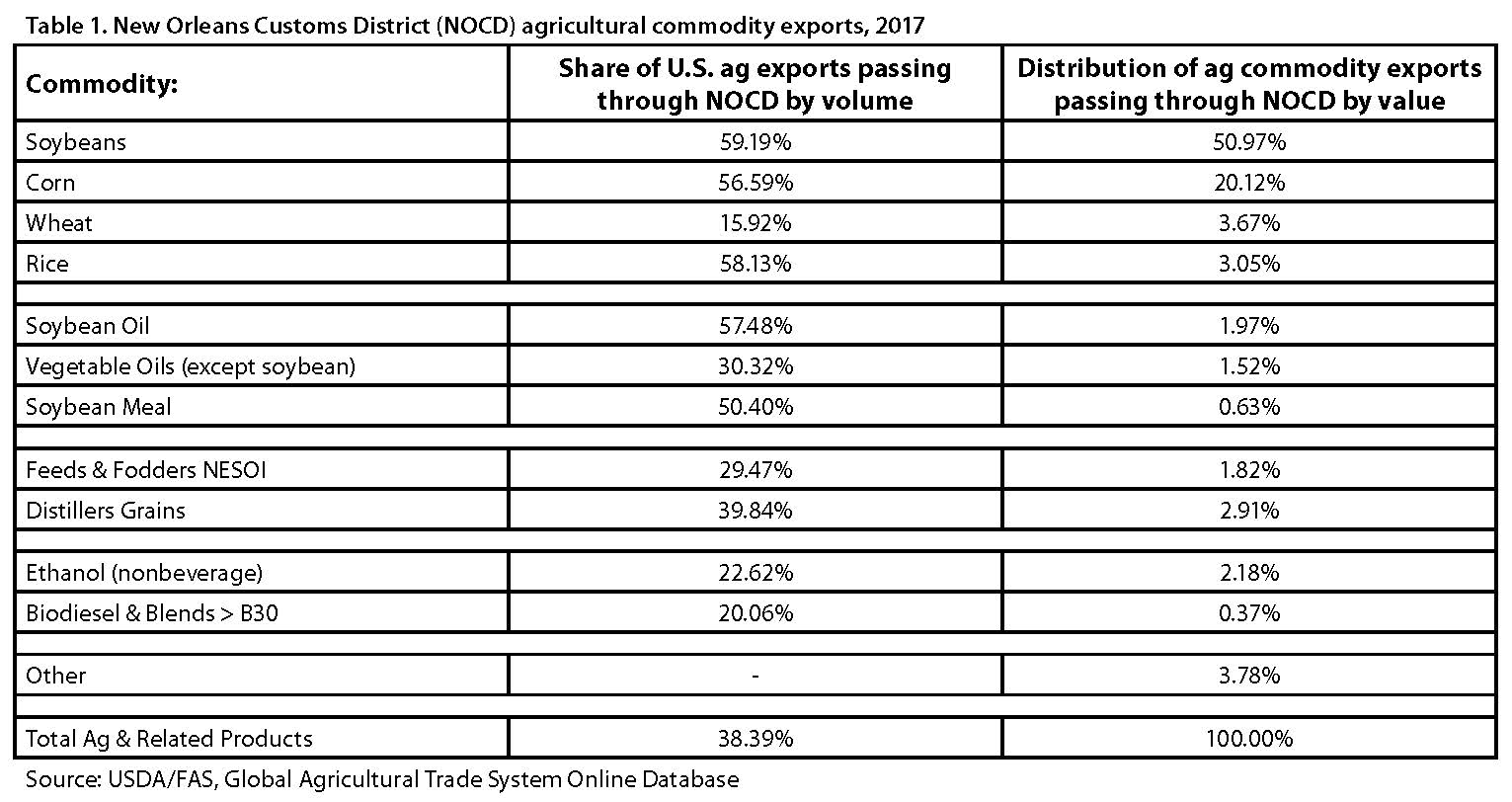