The ability of natural ecosystems to sequester significant amounts of organic carbon provides a good example of an ecosystem service that can be used in climate mitigation programs on local and regional scales. These mitigation programs may reduce the potential impact of increasing carbon dioxide concentrations in the atmosphere that are directly and indirectly driving climate change.

The capture of carbon dioxide by photosynthesis, followed by the conversion to organic carbon by plants and subsequently held in above-ground (for example in leaves, branches, stems) and below-ground biomass (such as roots) is called “blue carbon” in coastal and marine environments given their distinct conditions called “blue water.” These coastal environments potentially play a significant role in organic carbon storage because the pervasive lack of oxygen in sediments limits, for example, the decomposition of plant organic material. This low oxygen results in accumulated plant organic matter that can last from hundreds to thousands of years, depending on the level and frequency of disturbances such as hurricanes and human activities affecting these natural environments.

While organic carbon sequestration has been widely assessed in terrestrial ecosystems, limited information is available about the magnitude of ecosystem activity in many coastal and marine environments. In particular, while blue carbon in seagrass, mangrove and saltmarshes has been quantified in numerous locations over the past 15 years, little data from submerged aquatic vegetation communities exist from fresh to saline coastal environments (Figure 1).

Submerged aquatic vegetation habitat throughout the Mississippi River Delta represents up to 35 million tons of organic carbon storage. This is equal to or higher than other terrestrial and marine environments and contributes to improving global estimates of blue carbon in coastal environments. This storage represents a significant and as yet unaccounted for pool of stored blue carbon, particularly if these values extend beyond this region to other extensive deltaic and estuarine habitats across the region and globe. As scientists and managers work to integrate blue carbon estimates into management programs, incorporating estimates of organic carbon stocks in submerged aquatic vegetation will provide more accurate estimates of blue carbon.

(This article appears in the winter 2018 issue of Louisiana Agriculture.) 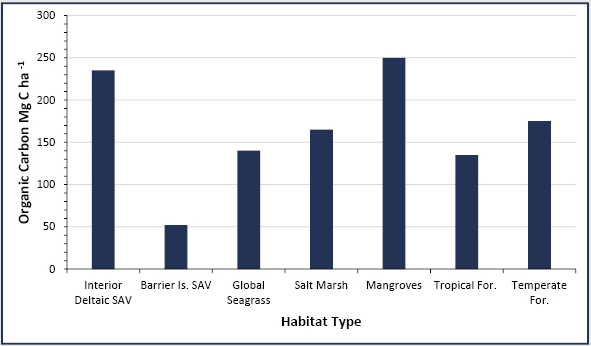