No-Till Conservation Agriculture and Fertilizer Use

Acreage under conservation tillage, especially no-till, is steadily increasing throughout the world. According to the Natural Resources Conservation Service, about 35 percent of the cropland for the top eight crops in the United States is under no-till, and that percentage is growing. Conservation tillage provides many benefits, including increases in soil organic matter, water infiltration rate, plant-available water content, water quality and soil biota, while also reducing soil compaction, soil erosion, nutrient loss and production costs.

The transition to no-till systems poses many challenges for producers, including planting management, soil fertility, irrigation and weed control, compared to conventional tillage systems because of their differences in soil properties and crop growth. One of the producers’ concerns about adopting no-till may be the lack of clear guidelines for nutrient management for those systems. No-till agriculture creates challenges because excessive residue can cause nitrogen fixation and the possibility of excessive runoff of any surface-applied nutrients. In addition, in no-till systems, minimal disturbance of soil alters soil properties, such as soil organic matter, microbial biomass and water infiltration rate, which, in turn, affect nutrient cycling, crop growth and yield. Therefore, compared to conventional tillage, no-till may alter the availability of plant nutrients and may necessitate adjusting fertilizer rate, time and placement.

Nutrient management in no-till systems is different from conventional systems because of stratification of nutrients in the soil layer. It is common to have nutrients accumulate and concentrate in the top few inches of soil in no-till systems as a result of surface-broadcasting fertilizers, surface accumulation of crop residue and low movement of nutrients into the soil. Stratification and accumulation of more nutrients within the top 2 inches of soil can limit the crop nutrient availability, including the major nutrients nitrogen, phosphorus and potassium.

Although nutrient availability in the surface layers in no-till systems may be enhanced by increased soil moisture because of residue cover, lower temperatures and lower moisture during dry spells may limit availability. Applying starter fertilizer in no-till systems helps in overcoming slow growth because of low soil temperatures at the early growth stages. Applying starter nitrogen at 20 to 30 pounds per acre is desirable, but rates above 34 pounds per acre are reported to provide no further benefits. Applying the starter to the side of the row below the soil surface, known as sidebanding, is desired because applying fertilizer close to the seed in the planter row can cause injury to seedlings.

In no-till systems, surface-applied nitrogen fertilizers, especially urea and urea ammonium nitrate, lead to higher volatilization losses than in systems where fertilizer is incorporated into the soil. In addition, surface application in no-till systems can lead to short-term nitrogen immobilization because of more residue, which breaks down slowly, especially in fine-textured soils. Because of this, during the first few years of no-till, applying up to 20 percent more nitrogen than recommended may help supply sufficient nitrogen to the crop to compensate for some of the nitrogen that is immobilized by the increased organic matter on the surface. After a few years, however, the increase in the amount of organic matter compensates for the lower mineralization rate and increases the nitrogen supply to the crop.

Higher nitrogen losses from broadcast urea in no-till systems can be attributed to a higher concentration of urease enzyme and crop residue, which limit urea from interacting with surface soil. Applying urea as shallow bands rather than surface broadcasting minimizes nitrogen loss as ammonia by up to 50 percent; however, the cost of the application has to be considered. Similar to inorganic nitrogen fertilizers, shallow banding of animal wastes helps in significantly minimizing nitrogen losses compared to surface application.

No-till can increase leaching losses of nitrogen fertilizers because of increased infiltration rates. This can be overcome by split applications, which are a recommended practice for all tillage types because of the high potential of nitrogen loss.

One way to minimize nitrogen fertilizer use is with fall legume cover crops, such as hairy vetch and Australian winter pea. Depending on the planting and termination date, vetch can add more than 100 pounds of nitrogen per acre.

Studies on water quality in no-till systems that received broadcast phosphorus had much higher phosphorus loss as dissolved phosphate compared to conventional systems. Hence, shallow or deep banding of granular or liquid phosphate fertilizers is recommended. Nonetheless, shallow banding of fertilizers 2 inches deep and 2 inches wide along the planter row may be beneficial for places like Louisiana where high rainfall increases the scope for runoff losses, and costs are relatively lower than deep placement.

Starter fertilizer containing both nitrogen and phosphate is desired for corn because the residue cover in no-till systems decreases soil temperature and increases moisture content that leads to reduced early nutrient uptake and growth. Applying nitrogen and phosphate starter fertilizer to no-till corn is reported to advance silking date and increase grain yield, especially in low-phosphorus soils because of the high phosphorus requirement for early growth and development.

Monitoring soil pH in no-till systems is important, especially for acidic soils, because the increased organic matter and surface application of ammoniacal nitrogen fertilizers lower soil pH in the soil surface layer. Applying lime as needed is important to optimize the availability of nutrients to the crop. On the other hand, decreasing soil pH will improve nutrient availability in alkaline and calcareous soils.

Recommendations for no-till systems include: fall legume cover crops, starter fertilizers containing both nitrogen and phosphate along with needed micronutrients, split application of nitrogen fertilizers, and shallow-to-deep banding of other nutrients.

Syam K. Dodla is an assistant professor at the Red River Research Station. His expertise includes soil fertility and irrigation.

(This article appears in the fall 2017 issue of Louisiana Agriculture.) 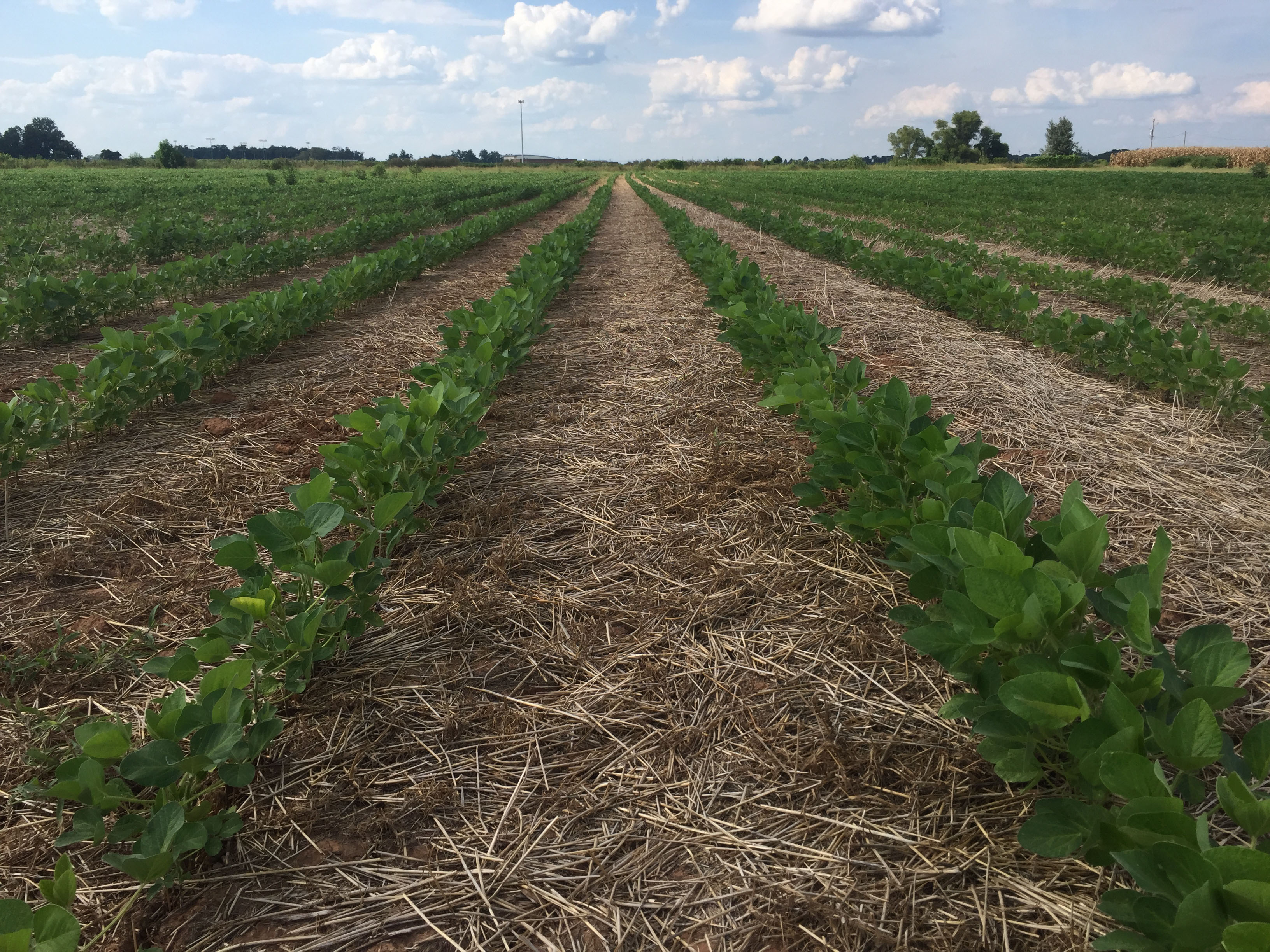 For generations, farmers used the plow and hoe to cultivate their crops. They used the plow to turn the soil, bury the residue from the previous crop and eliminate weeds. Then they used hoes and later mechanized tillage equipment to smooth the soil for planting. After the plants emerged from the soil, they used hoes and mechanized cultivators to travel between plant rows to uproot weedy plants.

The drawback to this type of management was soil loss through erosion—either by wind blowing the soil into the air or water washing it away. Even after chemical weed control began replacing mechanical cultivation, farmers continued to use the plow and tillage equipment to prepare the soil for planting.

New methods for planting into previous years’ seedbeds have been successful in moving the process to an area of limited-till or no-till crop production. Stronger planters equipped with fertilizer and herbicide attachments can now place the seed into the soil without the requirement for a prepared seedbed. And herbicides have replaced cultivation to control weeds between the plant rows.

The movement to what is called conservation tillage has resulted in widespread reductions in erosion, keeping the soil in the fields and reducing the loss of organic matter and soil nutrients.

Rick Bogren is a professor with LSU AgCenter Communications and the associate editor of Louisiana Agriculture.