Three new soybean herbicide systems will give Louisiana farmers much-needed tools to fight increasing resistant weed populations they have struggled with in recent years. However, LSU AgCenter weed scientists caution that the new products, which they have been evaluating in field trials, will only be helpful long term if applied according to label and in combination with other herbicides and good management practices.

Among the more problematic weeds in Louisiana and many other states is Palmer amaranth, a prolific seed-producing plant that often cannot be adequately controlled with glyphosate because of resistance development. Since the commercialization of Roundup Ready crops, over reliance on weed management programs that only include glyphosate on weeds such as Palmer amaranth, as well as johnsongrass and Italian ryegrass, has resulted in development of a tolerance for the herbicide resulting in the need for alternative control measures.

Palmer amaranth can be controlled with other herbicides, such as dicamba and 2,4-D. However, these herbicides have historically also killed crops that do not contain genetic traits that safeguard them. Soybean varieties capable of withstanding over-the-top application of either dicamba (Xtend Cropping System) or 2,4-D (Enlist Cropping System) have been developed for commercialization. The Xtend system recently came on the market; the Enlist system has yet to be commercially released. Although effective in controlling weeds in labeled crops, concerns exist regarding off-target movement to susceptible and sensitive crops. Therefore, label specific language that includes restrictions for application must be followed to mitigate potential off-target spray movement to these crops.

AgCenter weed scientist Daniel Stephenson has been studying the effectiveness of Xtend and Enlist Duo herbicides, among other technologies. While both show promise, he said, they work best in cases where additional pre-emergence herbicides had already been applied to the soil before planting.

Eliminating weeds as early as possible is critical, said AgCenter weed scientist Donnie Miller, who has been evaluating these technologies in addition to Balance GT, another soon-to-be-released technology. That system includes soybeans with a trait allowing pre-emergence applications of Balance Bean herbicide and over-the-top applications of glyphosate.

Balance Bean is an isoxaflutole-based herbicide that controls weeds by blocking an enzyme commonly known as HPPD, which stands for 4-hydroxyphenylpyruvate dioxygenase.

“It will essentially get the weeds before they ever come out, whereas with glyphosate, dicamba and 2,4-D, the weeds have to be emerged,” Miller said. “When you’re ready to make your application and weeds are at the optimum size, you always have that chance of a rain coming in and delaying you. You’ve gone from spraying optimum-size 1- to 3-inch weeds to spraying 6- to 7-inch weeds.”

The arrival of additional ways to control weeds is good, but not because any of the new products alone are a perfect solution. Rather, having more options helps farmers combat not only weeds, but also the problem of herbicide resistance.

HPPD-inhibitor herbicides like Balance Bean — a relatively recent development in the weed science field — offer a mode of action different from any others currently available. Incorporating multiple modes of action is “the basis for any good resistance mitigation program,” Miller said.

“There’s a false assumption out there that dicamba, which can be used in the Xtend technology, is essentially going to be a silver bullet for resistant pigweed. It is not,” Stephenson said. “We have to protect this technology. If you ride the dicamba horse and that’s all you’re using, we’re going to follow the same path we did with glyphosate and end up with resistance.”

He wants to find out if late-season herbicide applications in corn can delay when farmers have to get back in their fields to control weeds to prevent weed seed production after harvest.

“A lot of weed seed is being produced after harvest, especially with corn. Corn comes off as early as mid-to-late July in some cases,” Copes said. “That’s a long period of time for weeds to germinate, go to seed and create big problems for future crops in those fields.”

He also is looking at how the timing of mowing and disking fields after harvest affects seed production.

Olivia McClure is an assistant specialist with LSU AgCenter Communications. 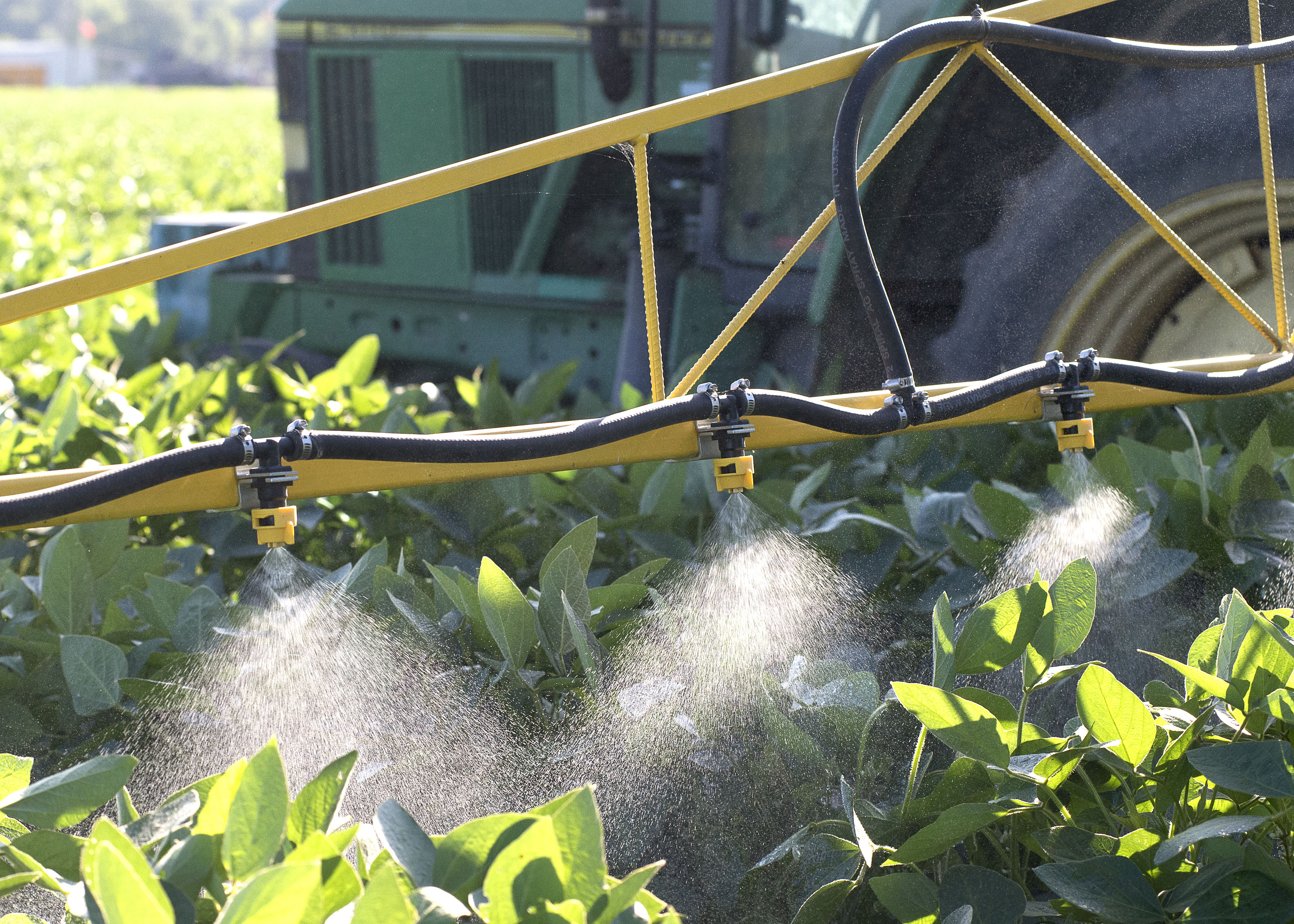 Farmers have to follow label instructions carefully before spraying herbicides in fields to avoid the problem of drift, in which air currents can carry the herbicides to other fields. They also have to make sure spraying equipment is thoroughly cleaned to avoid unintended herbicide injury. Photo by Olivia McClure