Insect and Disease Challenges for Growing the Tea Plant

Worldwide, tea is the most popular drink after water, and all types of tea — white, green, black, oolong and fermented (such as puerh) — come from leaves of one plant, Camellia sinensis (Figure 1). Estimated market value of tea in the U.S., including bagged tea, bottled tea, loose tea and tea consumed at restaurants, was $12 billion in 2016, according to the Tea Association of the USA. This demand is almost completely met by imports, making the United States the second largest tea importing country only after Russia.

The microclimates and acidic soils in many areas across the country are suitable for growing tea, and commercial tea production has been growing in recent years because of demand for locally grown tea. Tea farms have been established in Mississippi, South Carolina, Texas and Idaho, in addition to farms in Alabama, California, Georgia, Florida, Hawaii, Michigan, New Jersey, Ohio and Washington State. In addition, growers of other specialty crops can add tea to their production because tea has similar growing requirements to blueberry and citrus.

Since 2013, the LSU AgCenter Hammond Research Station has worked with tea growers and enthusiasts in Louisiana. Two orchard growers recently planted tea as an additional crop in their citrus orchards, and two other growers are growing 1-gallon container plants for sale to potential farmers and the public. In addition, one grower has been collecting tea cultivars and is doing seedling selection and propagation for tea cultivars suitable for Louisiana conditions. The growers have just started growing tea, and it will take three to four years before they can harvest a large enough quantity to be sold commercially or processed for packaging.

Researchers at the Hammond station are evaluating a collection of named varieties, including Big Leaf, Small Leaf, Red Leaf and Golden Leaf, and seedling selections for growth habit, vigor, and pest and disease issues. The two most challenging pests and two most challenging diseases are listed below. Documentation of economically important pests helps prepare growers and gardening public for a more successful growing experience.

Tea scale (Fioriniae theae) is an armored scale infesting almost all species in the genus of camellia. A layer of a white fluffy substance on the underside of the leaves is a good indication of infestation (Figure 2a). Female adults and eggs hide beneath a dark brown waxy covering (Figure 2b). Young nymphs hatch from eggs and move about to find a new location to settle down and feed on plant sap through a mouthpart inserted into leaf tissue. Males are winged and rarely seen.

Damage on tea plants includes yellow spots (Figure 2c), curled leaves and defoliation. Without treatment, plants can be killed by severe defoliation. An insect growth regulator such as pyriproxyfen or azadirachtin mimics the effects of insects’ own juvenile hormone and prevents developing into adults. However, they will not kill adults. It is often suggested to mix them with a horticulture oil to control both immatures and adults. Many growth regulators and oil products are approved for organic vegetable production.

Because tea is a relatively new crop, it is often missing from insecticide labels, but products registered for vegetables are safe to use on tea.

Chilli thrips (Scirtothrips dorsalis) prefer feeding on tender tea leaves. This tiny thrips is only 0.03 inch in length and hard to see (Figure 3a). However, the brown, corky stripes on undersides of leaves are typical and can be confirmed with inspection under a microscope (Fig 3b). Other damages include leaf distortion and defoliation. Severely damaged plants may have no leaves suitable for harvesting.

Spinosad is very effective against chilli thrips, with several products approved for organic vegetable production. Horticulture oil can provide some suppression. Insecticides should be applied during the time of the day when thrips are active between 9 a.m. and noon and late afternoon when weather is not too hot.

Other pests observed on tea during the evaluations at Hammond include leafhoppers, flea beetles and inchworms (Figures 4a to d). Damage from these pests is transitional and insignificant. However, severe damage from leafhopper has been documented in traditional tea-producing countries, and feeding by a specific leafhopper, Jacobiasca formosana, actually contributes to the unique fragrance in some oolong and black teas such as Oriental Beauty.

No diseases have been observed on plants grown in raised beds in the evaluation garden where irrigation and partial shade are provided.

Yan Chen is an associate professor and Allen Owings was resident director at the Hammond Research Station in Hammond, Louisiana, now retired. 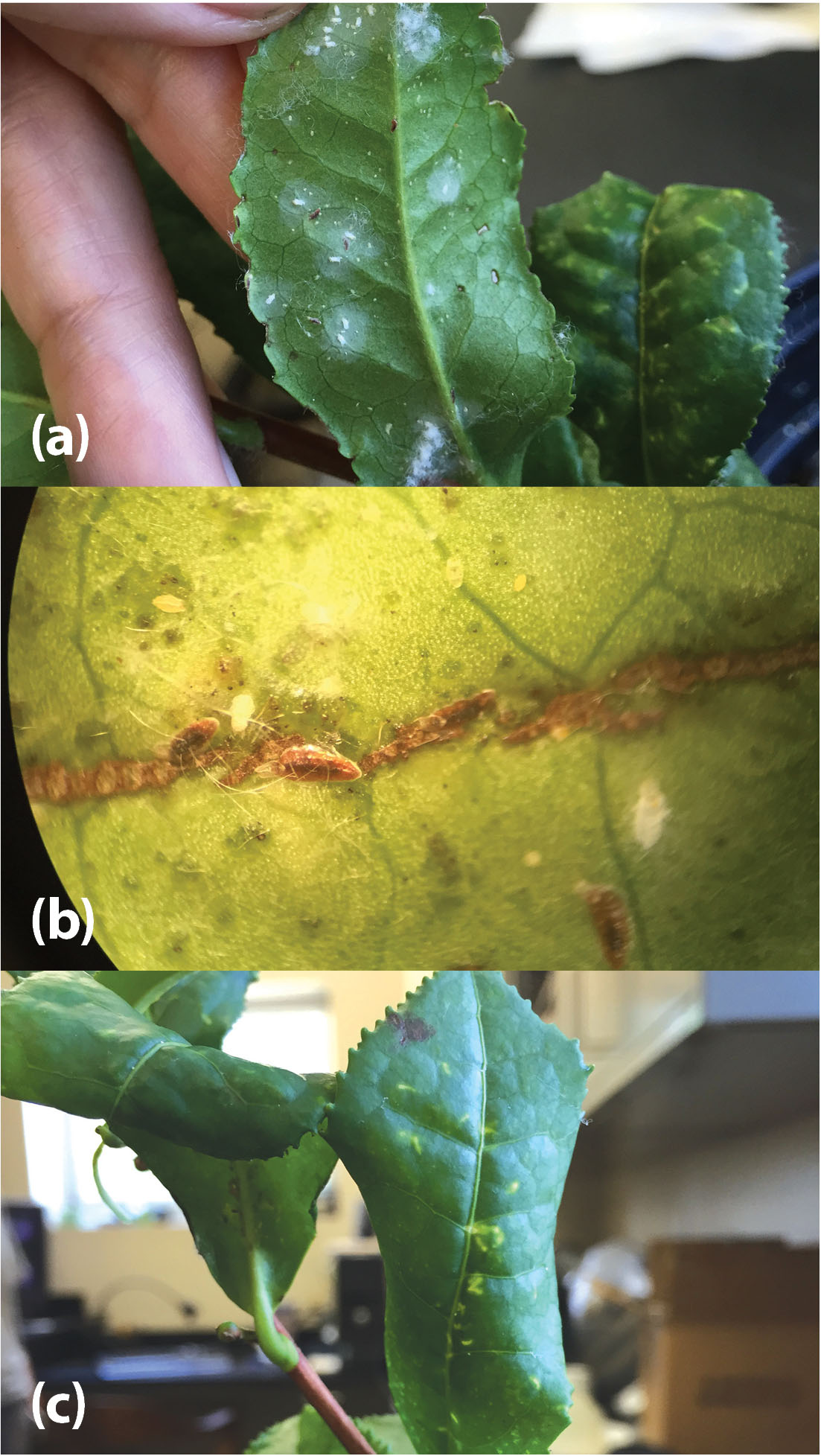 Figure 2. Tea scales with fluffy white exudes on the lower side of the leaf (a); scale adults under a microscope (b); and scales causing yellowing on upper side of tea leaves (c). 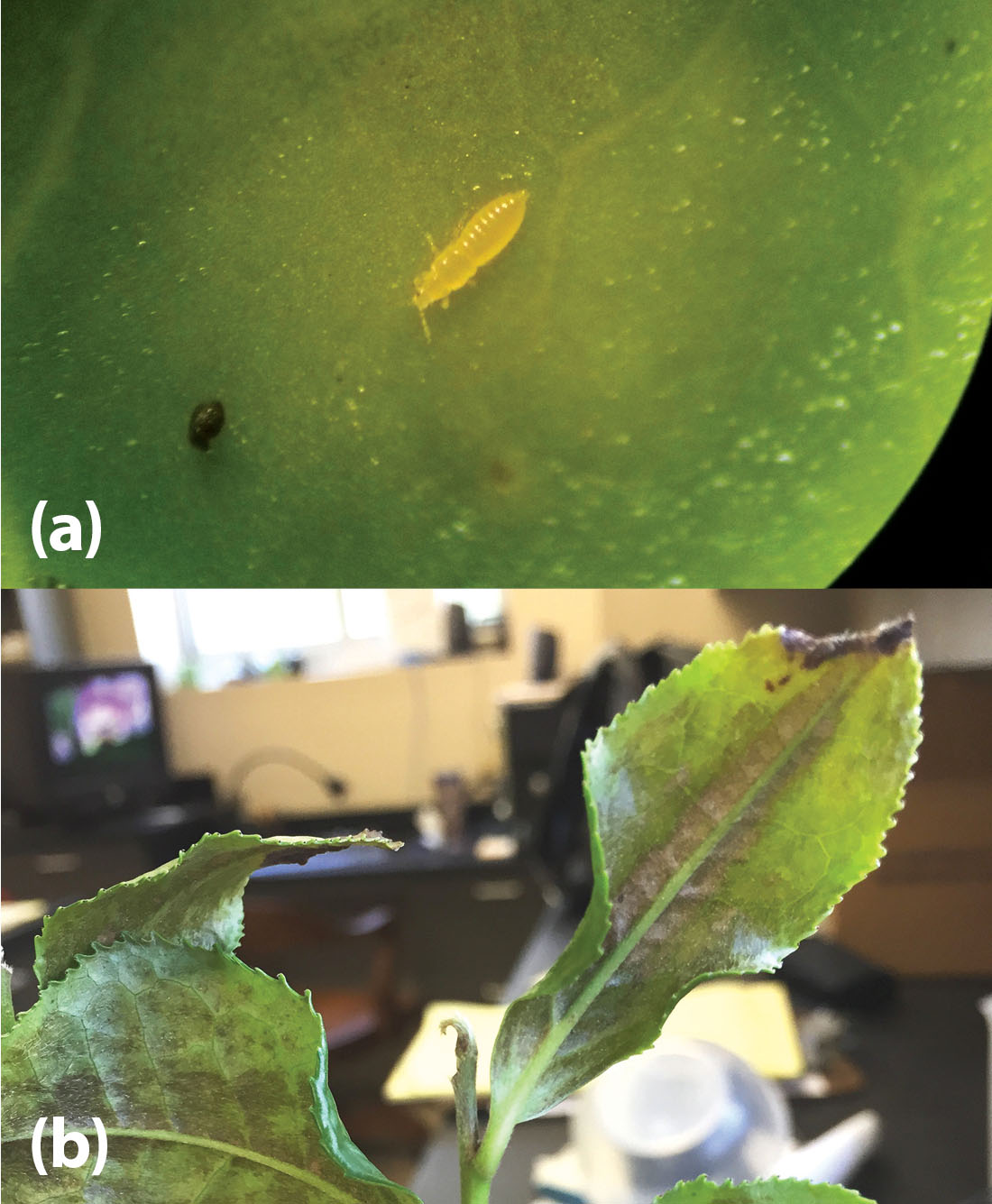 Figure 3. A chilli trips nymph (a) and the typical brown corky stripes on the lower side of tea leaves caused by chilli thrips (b).