While many Southern gardeners are familiar with the intoxicatingly sweet fragrance of the ubiquitous sweet olive tree in Louisiana landscapes, the true edible olive (Olea europaea) is beginning to find its way into many backyard gardens and commercial landscapes. Numerous retail nurseries are now offering 3-gallon container size olive trees for sale in south Louisiana. As an ornamental landscape plant, olives offer an unusual silver-green foliage color on an easily-pruned medium-sized tree.

More traditionally, olives are known as a useful orchard crop for producing culinary olive oil, table or eating olives, and olive oil-derived products for skin and hair care. The United States is the world’s largest consumer of olive oil, but only about five percent is produced domestically. With more than 35,000 acres in cultivation, California has long been the largest domestic olive producer. However, the last decade has witnessed the growth of olive orchards in southern states such as Texas, Georgia and Florida. Texas alone now boasts more than 4,000 acres of olive trees, putting a new twist on the old concept of an oil boom in that state.

This ever-increasing interest in growing olive trees in Louisiana began generating quite a few questions for the LSU AgCenter. But because olives had never been university-evaluated in Louisiana, researchers knew they had an opportunity to investigate a potential new specialty crop for the state. In fact, a 2015 survey of Louisiana Master Gardeners indicated great interest in learning about and growing olive trees, but there was little existing knowledge or experience with the crop.

In May 2015, the LSU AgCenter Hammond Research Station planted nearly 100 olive trees on about an acre of land to begin an initial varietal evaluation on establishment success in Louisiana’s challenging climate. The project is funded by the Specialty Crop Block Grant Program administered by the Louisiana Department of Agriculture and Forestry.

Olive varietals (a synonym for varieties) represent a broad spectrum of fruit size and tree growth habit. The Hammond orchard includes 15 varietals, with four trees of each planted within the core evaluation area. They are Anglandau, Arbequina, Arbosana, Bouteillan, Chemlali, Coratina, Frantoio, Grossane, Koroneiki, Manzanilla, Maurino, Mission, Oueslati, Pendolino and Picual. Because of regional supply constraints, different varietals were not available in uniform container sizes and tree heights. Tree spacing in the trial area is classified as a traditional orchard layout, with 18 feet between individual trees and 25 feet between rows. This large spacing was used so the true tree shape can be observed. Olives can grow to be large trees when little pruning is done, easily reaching 15 feet wide and more than 20 feet tall. Most modern orchards plant trees much closer together in a high-density or super high-density orchard layout.

Olives have shallow root systems and require good drainage, so orchards should have raised planting rows that are at least 12-18 inches higher than the surrounding soil level. Olives prefer a neutral to slightly alkaline soil pH and should be planted in full sun.

Although olives require a certain amount of vernalization (cool but not cold) during winter, temperatures that drop below 15-20 degrees can cause severe injury to olives, especially young trees with small trunks.

Even though the full two-year trial period has not yet been completed, trends in the initial results are apparent. The evaluation orchard at Hammond experienced exactly the type of harsh climactic swings plants routinely endure every few years in Louisiana. March and August 2016 brought historic flooding at the station, with standing water in the olive orchard during the August event. Surprisingly, most olive varietals appeared to be unaffected by the historic rainfall totals in 2016. The research station has sandy soil that drains well, so this probably helped in their resilience. While some preliminary evidence has pointed to possible root rot fungal pathogens in a few specimens, those particular trees actually died before the major floods as a result of a leaky irrigation valve at the lowest elevation of the planting area.

While the 2015-2016 winter was mild, the 2016-2017 winter season concentrated all its frigid nastiness in one weekend in January 2017. Unseasonably warm weather yielded to an arctic front that pushed south and dropped nighttime temperatures to 22 degrees two nights in a row. The resulting damage of burned leaves and bark splitting on some varietals was expected, but a surprising number of trees pulled through with barely any damage.

As with any new orchard planting, the disturbed soil exploded with extremely high weed pressure. Although a number of herbicides are labeled for use around olives, the trees are nonetheless quite sensitive to certain active ingredients, such as glyphosate. In Louisiana, typical recommendations are to keep the orchard floor clean of weeds and leaf matter. That goal was achieved but caused damage through herbicide drift to some of the smaller olive trees.

Damaging insect pressure was not widespread, with black scale (Saissatia oleae) insects being the most common. Winter temperatures and an application of horticultural oil and carbaryl insecticide significantly reduced the population.

Despite all these challenges, Anglandau, Arbequina, Bouteillan, Grossane, Manzanilla and Picual appear to be the best-established varietals after the first year. Arbosana, Frantoio, Koroneiki and Mission established well but suffered greater cold damage as shown by splitting bark or excessive defoliation. However, Mission and Koroneiki appear to be recovering better than others. Bouteillan, Grossane and Picual lead in ornamental value so far.

With many promising varietals after nearly two rough years in the ground, olives may have the potential to be successfully established as a small orchard crop in south Louisiana, especially south of the I-10/I-12 corridor. With so much disease and insect pressure now weighing on citrus trees in Louisiana, some growers may find olives could potentially be a partial replacement crop. In addition, the ornamental value of certain varietals provides good cause for olives to be considered when choosing landscape plant material. So whether someone is interested in planting 100 trees or just one, olives may prove to be fairly adaptable to Louisiana’s unique and challenging climate.

Jason Stagg is an instructor and Allen Owings was resident director and professor (now retired) at the Hammond Research Station.

(This article is published in the summer 2017 issue of Louisiana Agriculture magazine.)

Individual olive trees are planted 15-25 feet apart in rows 25 feet apart in an initial varietal evaluation at the Hammond Research Station in Hammond, Louisiana. Scientists are trying to find varieties that will grow in Louisiana. Photo by Jason Stagg 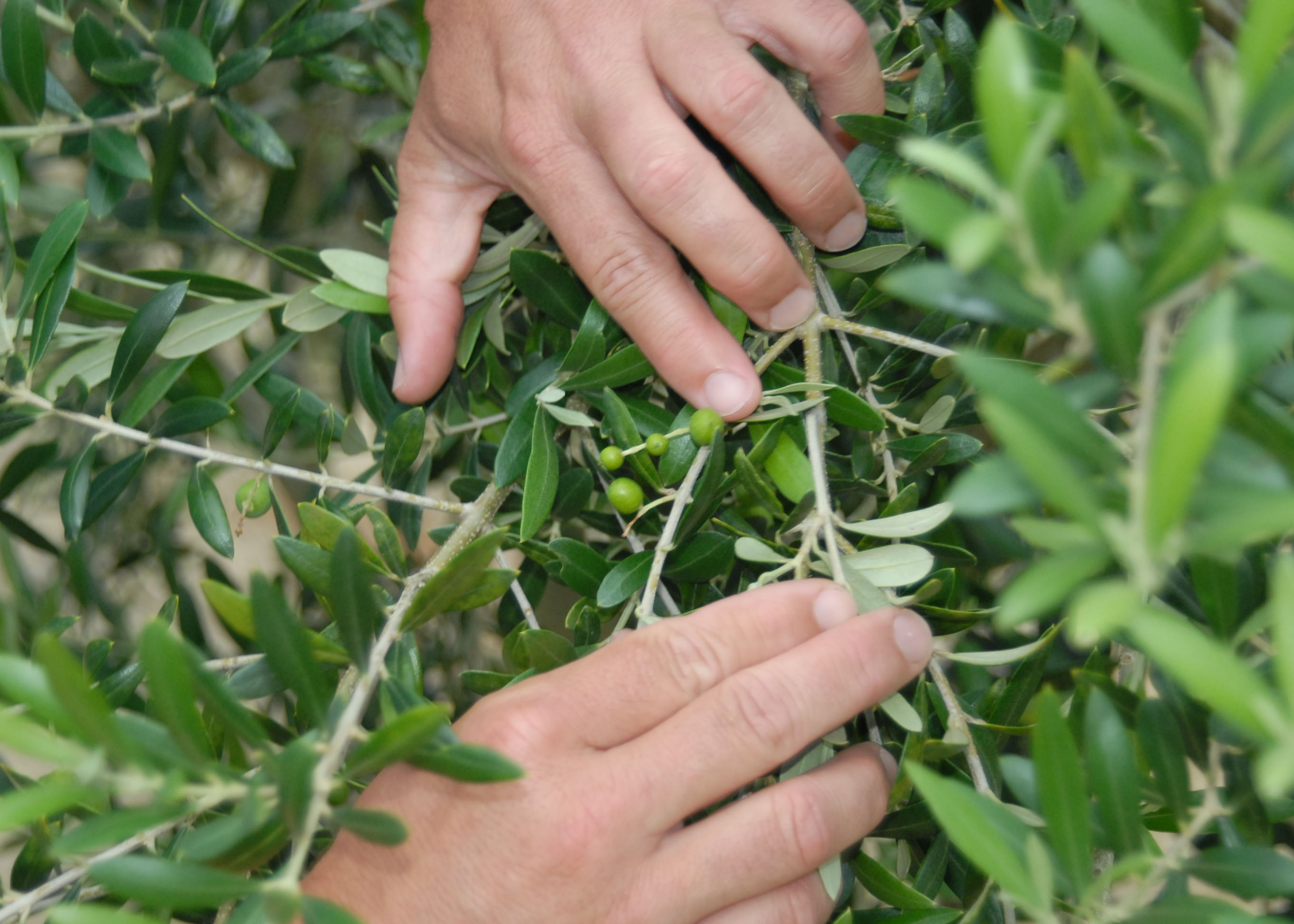 Olives can be grown both for fruit and as an ornamental plant in the landscape. The fruits require six to eight months for full maturation. Table olives are harvested earlier, when they’re firm, and oil olives are left on trees until oil content reaches 20 to 30 percent in late fall. Photo by Rick Bogren

LSU AgCenter horticulturist Jason Stagg stands in the olive evaluation area at the Hammond Research Station. Olives are primarily grown for the fruit, but many varieties have considerable ornamental value in a home or commercial landscape setting. They are related to ash, privet, jasmine, forsythia, sweet olives and fringe trees. Photo by Rick Bogren