Louisiana Sugar in a Global Context

The global sugar trade played a key role in the historical emergence of a world economy in the 16th century. Originally domesticated thousands of years ago, sugarcane cultivation slowly spread first through Asia, then through the Middle East to Europe, and then globally with Spanish and Portuguese exploration and conquest. Early global sugar production centered in the Caribbean and Brazil; it was one part (along with African slaves and rum) of the Trade Triangle that formed the early global economy. Since then, global trade in sugar has continuously expanded, a trend that is projected to continue for the next several decades. Today, however, nearly all the increase in demand for sugar is in the developing world while there is little or no change in demand in the United States and other developed nations.

Louisiana sugarcane farmers entered this global system in the late 18th century and became a large cane sugar supplier in the emerging United States. As domestic demand has always been high, Louisiana farmers have principally produced sugar for the local market. Still, the Louisiana sugar industry has both contributed to and been influenced by the global sugar trade in multiple ways. For example, slavery was critical to the early success of cane sugar production throughout the Americas, including Louisiana. Louisiana’s sugar industry has been, and continues to be, affected by global, regional and bilateral trade agreements that potentially influence the future of Louisiana sugar.

Louisiana farmers have produced sugarcane since 1795. Within a few decades, Louisiana became a critical sugarcane supplier for the United States and has continued to fulfill that role. Over the past two centuries, technological advancements have contributed to the continued viability of Louisiana’s sugar industry. Some important examples include the development of steam-powered sugar factories, the research that developed frost-resistant cane varieties, and the inventions of the evaporator, condenser and polariscope, an instrument used to measure the percent of sucrose or amount of sugar in a sugar-containing plant. Louisiana’s most important contribution to the world’s sugar industry was the multiple effect evaporator, invented in 1834 by New Orleanian Norbert Rillieux, one of the world’s first chemical engineers and a French-speaking Creole free man of color. Rillieux’s invention, still used in the industry today, enables the production of high quality sugar at a lower cost.

For more than 100 years, sugar has maintained its position as a critical economic driver in southern Louisiana despite increasing competition from other global sugar producers and new sweetener products. With expansion, key organizations, such as the American Sugar Cane League, the LSU AgCenter and the U.S. Department of Agriculture, have all made substantial contributions to industry innovation in numerous ways. These organizations and others continue to support the Louisiana sugar industry.

Florida and Louisiana are the main producers in the United States for the domestic sugarcane market at about 45 percent and 40 percent, respectively. Texas produces smaller amounts, and the sugar industry in Hawaii has ended due to flat prices, declining sugarcane production and increasing processing expenses. Sugarcane is first processed into raw sugar and then refined white sugar. Sugarcane products compete directly with refined white sugar extracted from sugar beets, an industry that thrives in northern states, including Michigan, Minnesota and Montana. Sugarcane also competes with other sweeteners, such as high fructose corn syrup, honey and artificial sweeteners.

While Louisiana’s raw sugar is critical for the U.S. market, it is only marginal to the global sugarcane supply. Brazil produces more sugarcane than any other nation — 40 percent of the global supply — followed by India, China, Thailand, Pakistan and Mexico. The United States as a whole accounts for 2 percent of the world total, and Louisiana produces less than 1 percent.

The U.S. Sugar Program, which is administered by the U.S. Department of Agriculture and operated under the farm bill, emerged in 1981 in response to (1) wildly fluctuating global sugar prices, (2) European nation’s programs that protected the cane sugar industries in their former colonies, and (3) heavily subsidized foreign sugar production in Brazil and elsewhere. First, the U.S. system adopted price floor guarantees. Second, the sugar program set an overall allotment quantity (OAQ) at 85 percent or more of the estimated U.S. consumption of sugar. This critical program affects the U.S. cane sugar industry in two ways: It guarantees a domestic market for the vast majority of the yearly production, and it also closes off the domestic market to global production.

The U.S. imports sugar to meet the remaining demand from 40 countries (the breakdown for 2015 is shown in Figure 4). Each country has a tariff rate quota (TRQ) that restricts how much it can export to the U.S. domestic market. The various TRQs reflect commitments made to the World Trade Organization, the Central American Free Trade Agreement (CAFTA), the North American Free Trade Agreement (NAFTA), and to bilateral trade agreements with specific countries.

NAFTA involves Mexico, and although the agreement was signed in 1992, the effects on the sugar industry did not come into play until 2008. This free trade agreement created a degree of disruption and uncertainty in the U.S. sugar market from 2008 until 2014 when a suspension agreement was signed that modified the terms for Mexican sugar imports. In essence, an antidumping investigation determined that the Mexican government was improperly subsidizing sugar exports to the U.S. market. The suspension agreement re-established quotas and floor prices for Mexican sugar imports.

The Louisiana sugar industry has persevered in the age of globalization despite the tremendous growth in international production and threats from competing products such as high fructose corn syrup and artificial sweeteners. The U.S. Sugar Program has been the primary contributor to stability in the Louisiana sugar industry over the past 35 years, and it will likely remain important for the foreseeable future.

Domestic sugar industry leaders will continue to assess the impacts of existing and proposed regional and bilateral trade agreements. Domestic industry leaders are concerned with the ability to maintain a U.S. sugar industry that produces sugar in an environment not subject to trade distortions that could potentially be used by other world producers of sugar in an effort to gain domestic U.S. market share. A third concern to the industry might be a shift in public perception that would deem new types of artificial sweeteners as potentially viable substitutes for sugar.

In sum, uncertainty caused by globalization and technological change characterizes the future of cane sugar production in Louisiana, and this has essentially been a reality since the emergence of the industry some 220 years ago.

Michael Deliberto is an assistant professor and Mark J. Schafer is an associate professor in the Department of Agricultural Economics and Agribusiness. 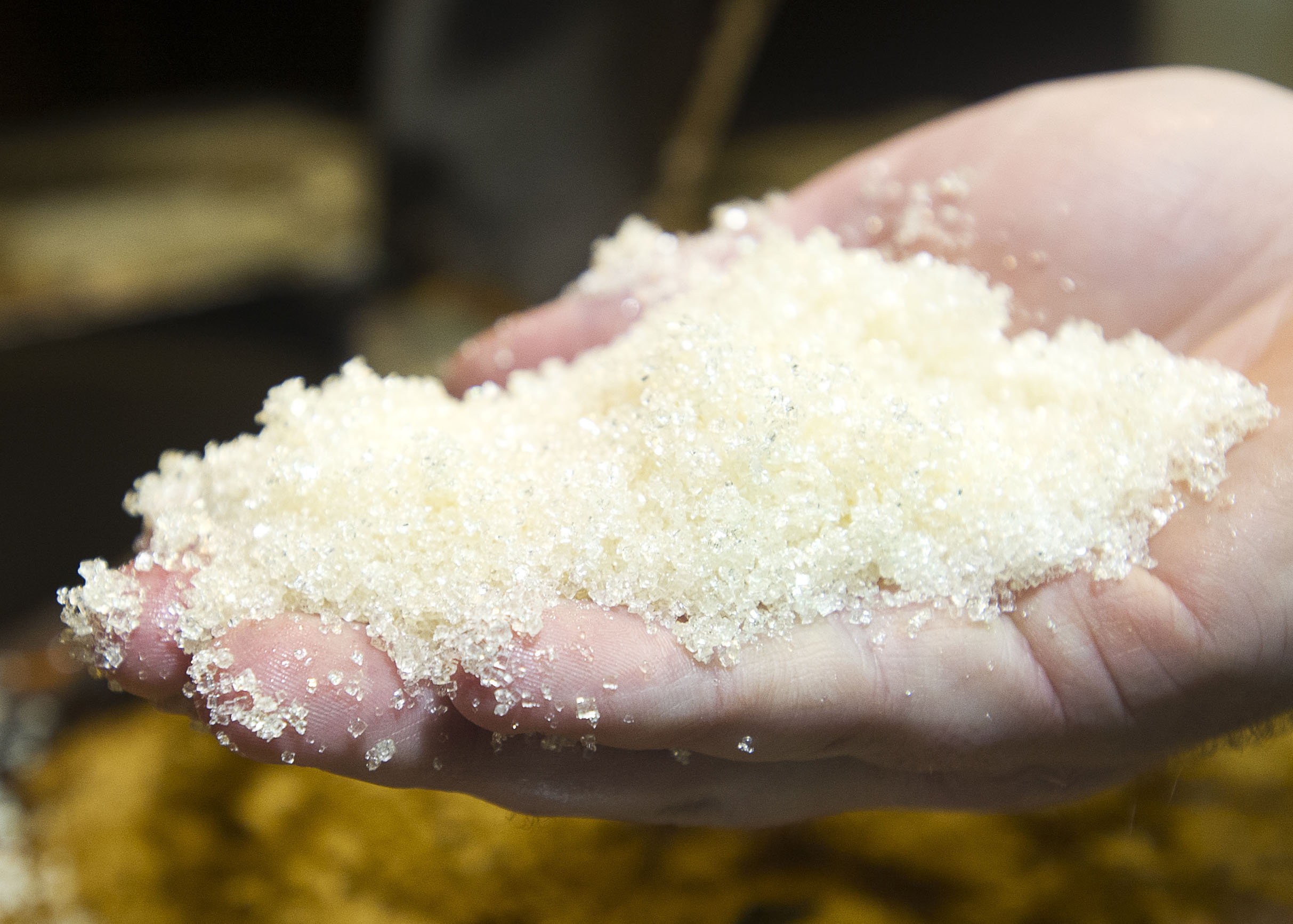 Raw sugar made in Louisiana. Photo by Olivia McClure