LSU AgCenter scientists continue to bring scientific discoveries to the world marketplace through the Office of Intellectual Property. Since 2000, 12 new companies have been started based on licensing technology from the AgCenter. Royalties from these companies and from other licensing agreements have generated more than $70 million since 1999. Following are four of the current “hot” properties.

The Bellevue sweet potato (LA06-52) was developed by Don La Bonte, professor and director of the LSU AgCenter School of Plant, Environmental and Soil Sciences. Bellevue was released in 2013 and has since become a commercial success across the world.

“Normally, varieties are very location-specific,” La Bonte said. “We were able to modify the genetics through crossbreeding to create a variety that was very adaptable. This variety is unique in that it can grow in both sandy and heavy soils in various weather conditions with a stable output. Stability is a big thing for growers.”

Australia in particular has seen an increased use in the variety. Nematodes, a type of plant parasite, are a major problem for the country because of its sandy soils. Previously, AgCenter varieties were grown there free of charge, but growers are now paying for the newer varieties, like Bellevue, because of their superior output. The variety is also being grown in several U.S. states, including Louisiana and California, and in several other countries including Canada and Honduras.

In addition to its resistance to nematodes like the southern root-knot nematode, the variety is also resistant to several major fungal diseases such as Fusarium wilt and Streptomyces soil rot. Plant production from bedded storage roots is not ideal, and research is underway to improve plant production.

Yield and disease resistance are not the only concerns for growers. They also want a plant that appeals to a wide variety of consumers. Bellevue is sweet with a moist texture. It has a bright orange flesh and a copper-colored skin with few indentations. Storage longevity is excellent. The sweet potato also has a consistent shape and quality from the field to the plate.

TigerBullets is a commercial product based off research by Qinglin Wu, professor in the LSU AgCenter School of Renewable Natural Resources. The invention (US patent 9,453,156 B2) is a new type of lost circulation material (LCM) based on recycled wood and plastic that fills earthen cracks inside of oil wells to maintain drilling fluid levels. TigerBullets is used as part of the drilling fluid and acts as a fluid loss control agent and lubricant to make the drill run more smoothly. The material also swells to fill cracks of various sizes on the sides of the drilling well and remains rigid to prevent seepage of drilling fluid through these cracks.

TigerBullets is made from natural, predominantly biodegradable, materials that would otherwise be thrown away as waste in combination with recycled water-bottle-grade plastics. One material that can also be used to make TigerBullets is the plastic from used motor oil containers. There are more than 3 billion quart-size HDPE (high-density polyethylene) motor oil containers being land-filled each year in the United States alone, containing over 150,000 tons of HDPE plastic.

TigerBullets is manufactured by Wallace Molding and Millwork Inc., of Columbia, Louisiana. The material is licensed and marketed by HolePluggers LLC, of New Iberia, Louisiana, and distributed by Alpine Specialty Chemicals. The material has been used by major oil companies including BP, Exxon, Chevron, XTO, Pioneer Natural Resources, OXY and others in more than 400 oil wells across the United States and in several other countries including Australia, Brazil, Canada, Russia, Singapore, Thailand, Kazakhstan, Mexico and Saudi Arabia. Schlumberger, an oilfield services company, has used TigerBullets in deep water drilling in Vietnam.

Niranjan Baisakh, associate professor in the LSU AgCenter School of Plant, Environment and Soil Sciences, is working on conferring drought tolerance to new varieties of plants through a gene he has isolated called SaADF2. Drought is a condition where either there is not enough water available for plants to absorb or where soil conditions prevent water absorption. This particular gene was derived from smooth cordgrass because of its high tolerance to both drought and salinity. The ultimate goal is to develop new varieties of rice and corn that can survive harsh environmental conditions.

One method of granting resistance to new plants is transgenesis, where a gene that codes for a certain trait from one type of plant is moved into a different type of plant, giving the latter that trait. Data from research studies performed under controlled conditions showed survival of rice plants containing the SaADF2 transgene for prolonged periods with no water supply and higher water absorption under salt stress for plants. This work is patent pending and received a grant from the LSU Leverage Innovation for Technology (LIFT) fund to advance the work toward development of a drought-tolerant corn.

Because of concerns by some consumers about eating genetically modified food, Baisakh is taking a multipronged approach to plant breeding.

“We wanted to validate the gene not just at the transgenic level, in a controlled greenhouse, but also at the field level, through traditional crossbreeding, where it could be tested in natural conditions,” Baisakh said.

The traditional breeding approach can help to reduce these concerns. Baisakh has also been crossing drought-sensitive and drought-tolerant varieties of rice and testing the progeny under natural field conditions at the H. Rouse Caffey Rice Research Station with hopes of creating drought-tolerant rice varieties that would show similar results obtained with SaADF2. New varieties developed from either method could go a long way in stabilizing food supply in regions of the U.S. and abroad where good quality water available for irrigation is limited.

Read more about genetic vectors for creation of resistant plants

A new method to produce high molecular weight (HMW), soluble chitosan powder was developed by Witoon Prinyawiwatkul, professor, and his research team in the LSU AgCenter School of Nutrition and Food Sciences. Chitosan has been reported as an antimicrobial that can be applied as a coating or film to foods and packaging materials. Chitosan also inhibits some pathogenic bacteria. Chitosan is derived from chitin, which is mainly produced from crustacean (such as crab and shrimp) shell wastes. A high molecular weight allows the chitosan to form a more viscous gel when mixed with water. High concentrations of HMW chitosan solution are difficult to obtain when mixed with water, but the new method makes it possible.

The developed technique provides a simple preparation procedure for dissolving the HMW chitosan without any chemical modifications. It also eliminates the pungent acidic odor of the solution, making it more desirable for use in food. Research has been performed on food preservative applications using the material’s film forming and coating properties to prevent spoilage at room temperature, which can be valuable in regions where refrigeration is limited.

The HMW chitosan’s applications are not limited to food preservation; promising research has also been conducted into its use as a unique antimicrobial. Recent studies by Marlene Janes, professor, and her team at the LSU AgCenter School of Nutrition and Food Sciences yielded positive results using the HMW chitosan against food-borne pathogenic bacteria in fish. Since oysters are consumed raw, strong antimicrobial properties are important to minimize the risk of food-borne illness. Further studies are being conducted into the types of bacteria affected, which may provide valuable results for potential seafood industry partners.

“We are very excited about these results,” Prinyawiwatkul said. “Crab, shrimp and crawfish are consumed all the time here, and our work can make consumption safer.”

Dirk C. Benedict is the marketing coordinator for the Office of Intellectual Property. 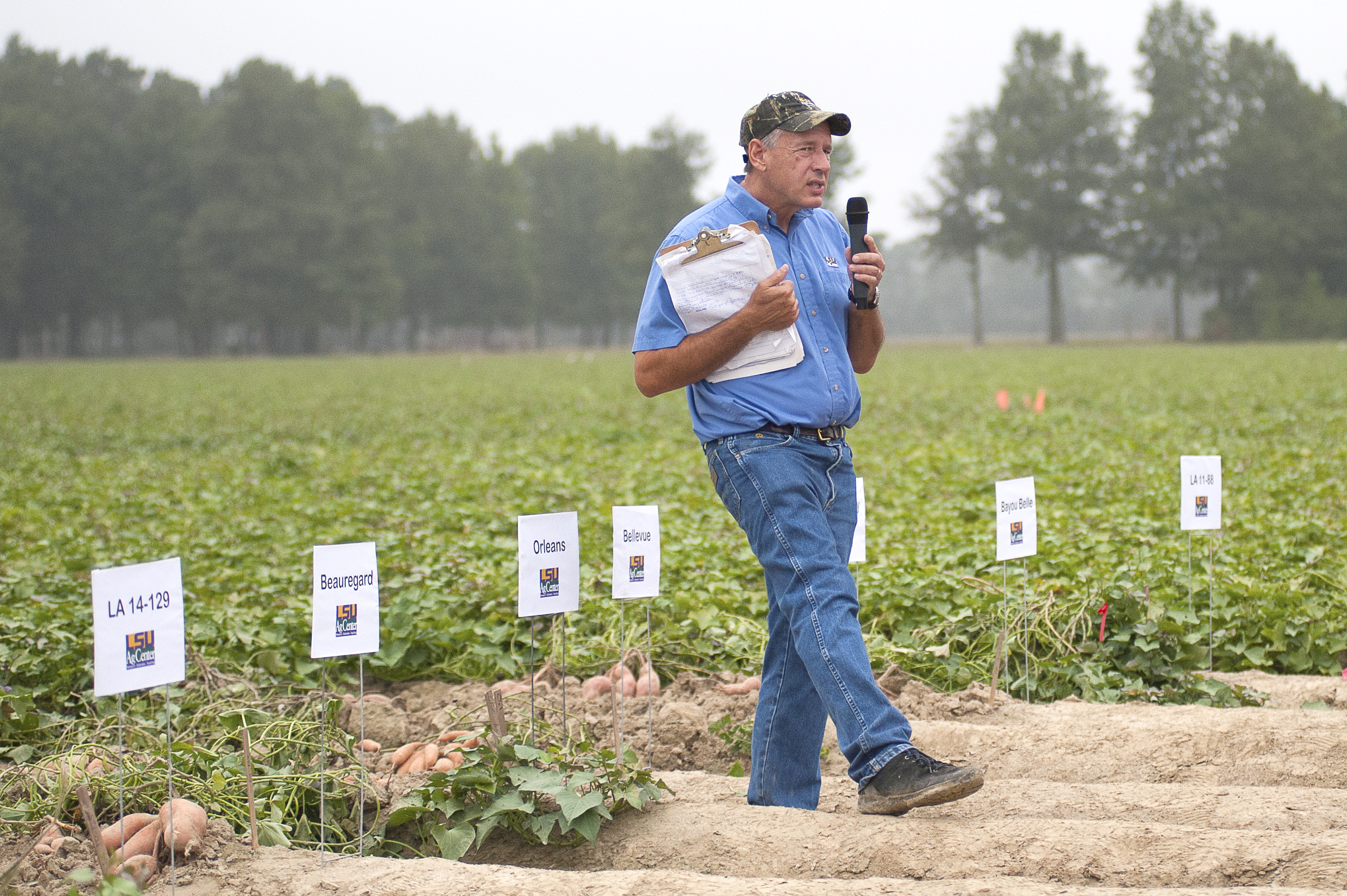 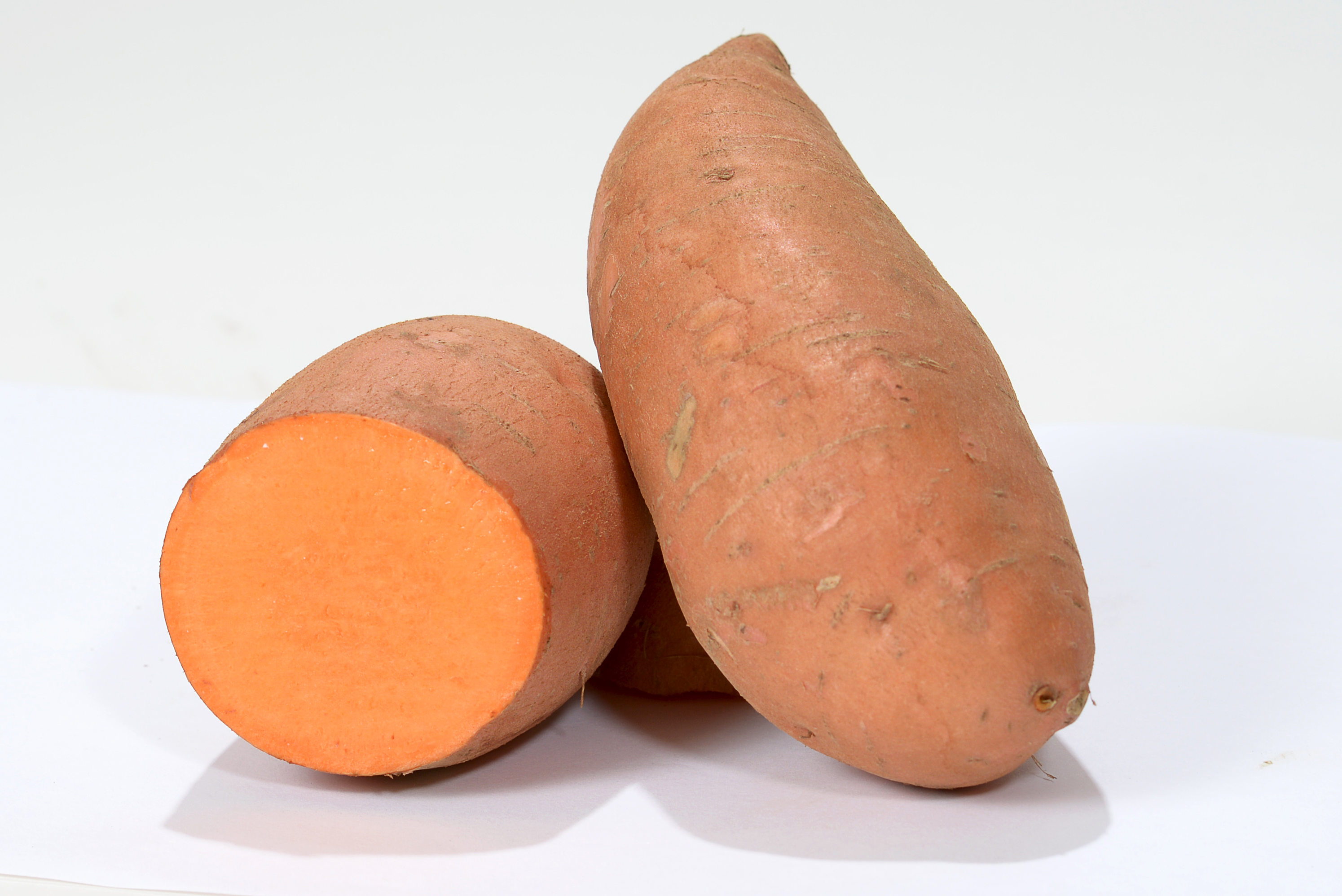 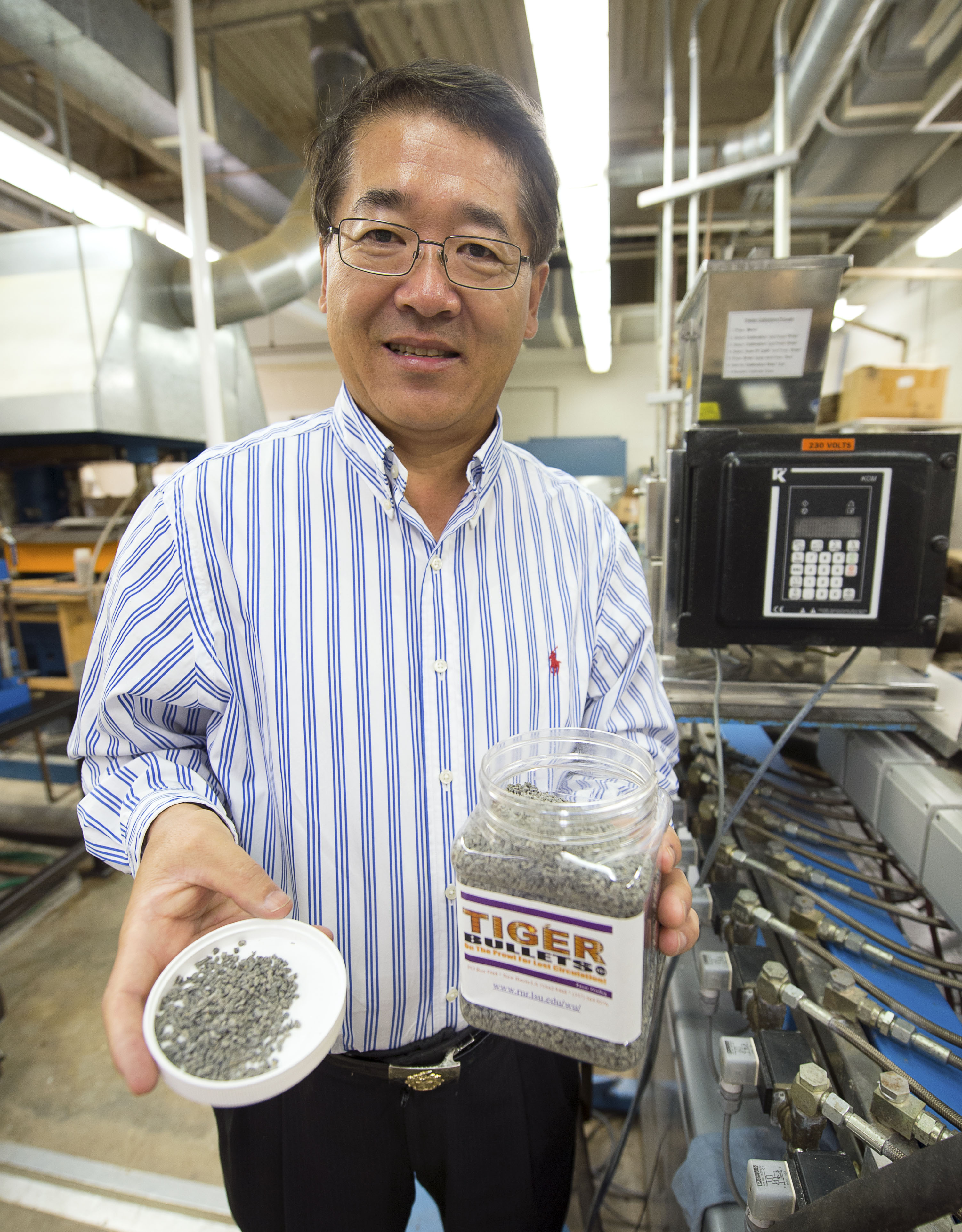 Qinglin Wu, a professor in the LSU AgCenter School of Renewable Natural Resources, displays TigerBullets, a lost circulation material product that he developed. TigerBullets are made from recycled wood and plastic, and they fill cracks inside oil wells so drilling fluid levels can be maintained and the drill can run more smoothly. The material also helps keep drilling fluid from seeping out of cracks. Photo by Olivia McClure 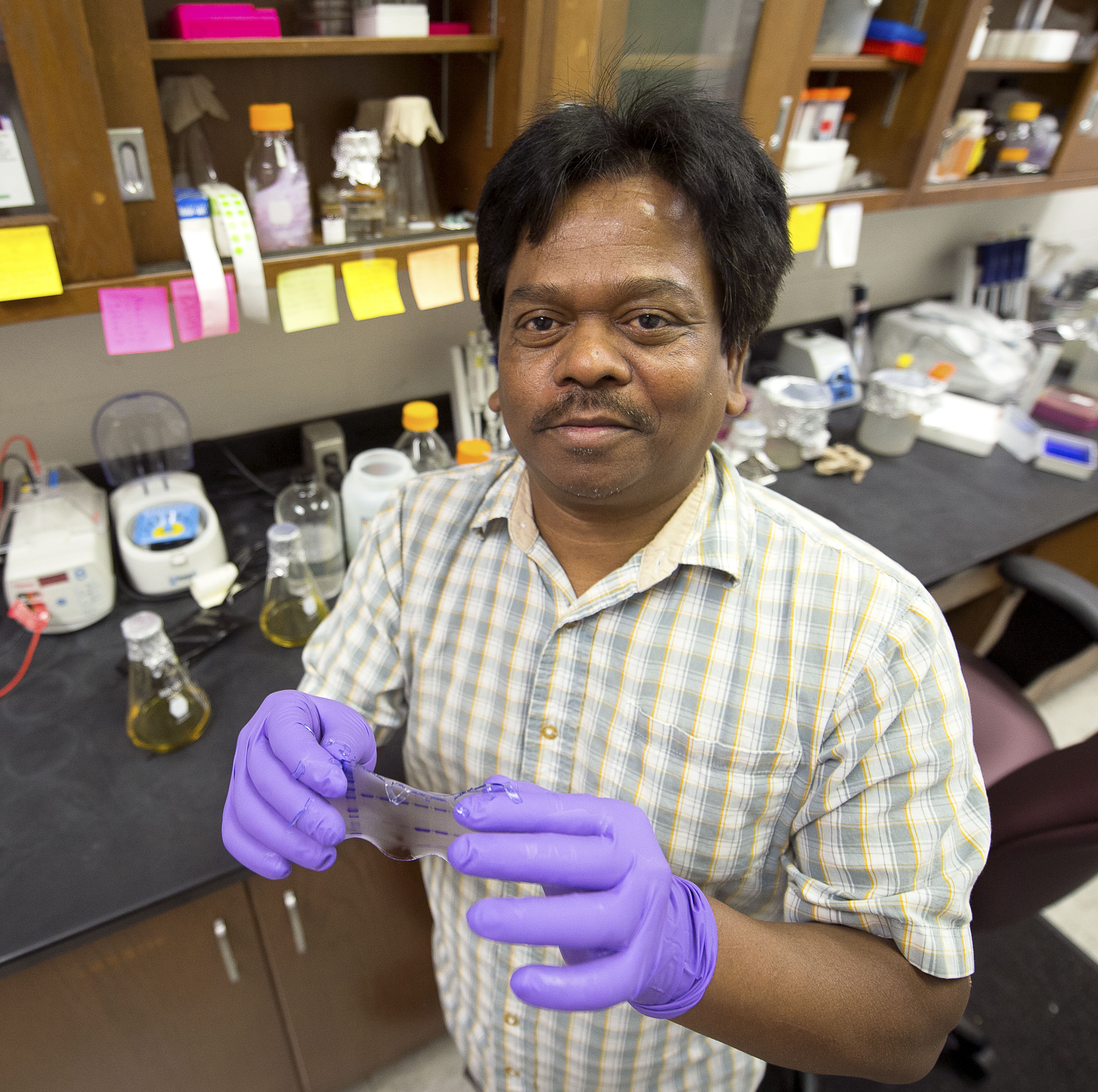 LSU AgCenter molecular biologist Niranjan Baisakh holds a piece of gel that shows the expression of a protein from smooth cordgrass that can be used to confer drought tolerance to crops. Photo by Olivia McClure 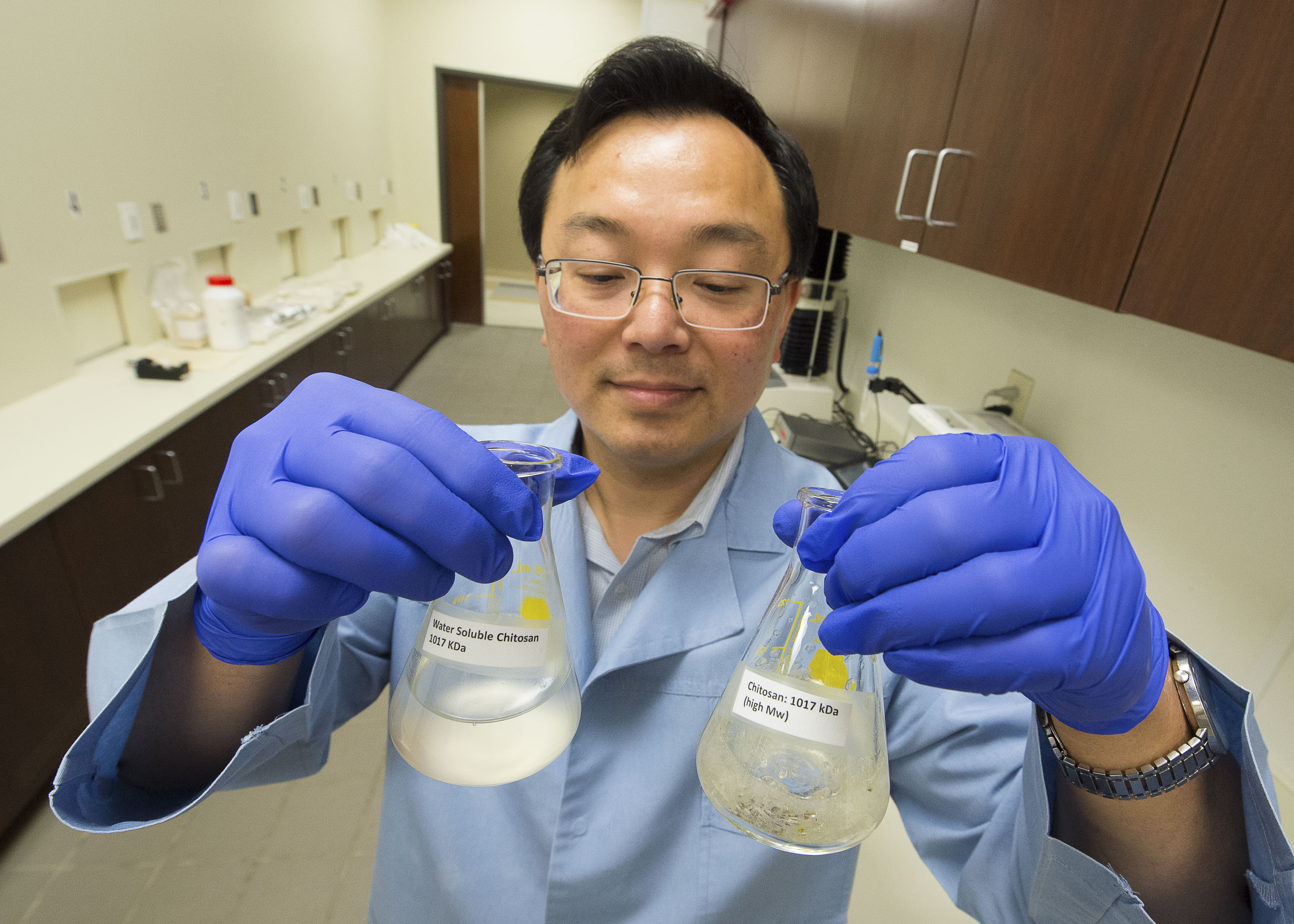